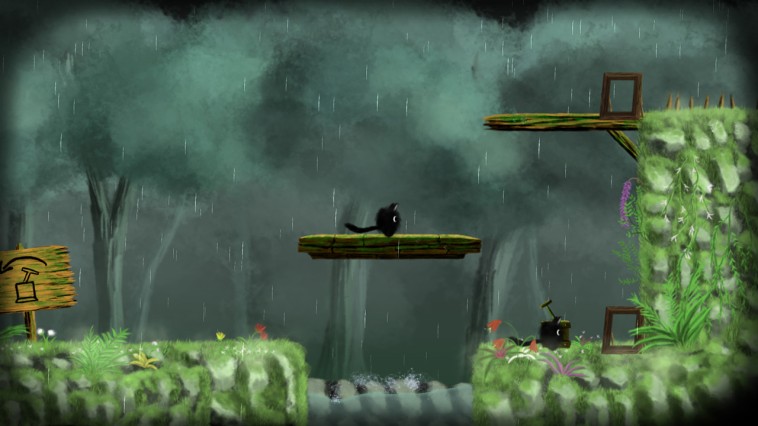 Imagine if there was another version of you which performed the exact same actions you did? Well, that would be weird wouldn’t it? Now imagine having that situation where you need to control two versions of yourself in such a way, both of you have to make it to certain areas within a level to proceed. Welcome to I and Me.

You play as two black cats who have to both reach two photo frames contained within a level. The mechanic in I and Me is that both characters are controlled at the same time, they perform the same actions as well. If you move them left they’ll both move left, if you jump to the right then they both jump right. It’s an interesting feature that makes this platforming puzzler an intriguing title to play. However this isn’t like Twin Robots where you can complete a level with just one of the characters, both need to reach the frames, if one dies then the level ends. 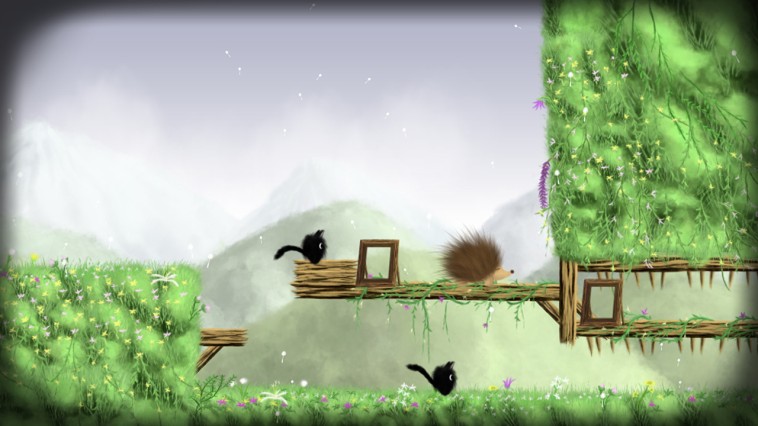 Within each environment as you progress, there will be hazards and obstacles to block your way. The levels in general are quite small, so usually you will see where all the issues are. Sometimes you cats will start close together other times they will be far apart. There are lots of hazards to bypass, water drowns your cats, spikes kill you instantly, which is the same result when a bee/sheep or hedgehog touches you. There will be times when all three animals are present, hedgehogs are fairly annoying as they just kill you, bees are very annoying as the beehive they fly from can move direction, however, bees also kill the other animals too. Sheep can kill you, but their wool can be jumped on to help you reach other places, please bear in mind to check where the other cat is whilst you attempt to jump, there’s nothing more annoying in I and Me than thinking you’ve reached where you want to be only for your other cat to hit a spike. Sometimes the hedgehogs and sheep fall from a magician’s hat, again this is something to consider when planning your route.

To complicate things further in I and Me, there are levers that move platforms & operate traps, a magical wand that can reverse the direction one of your cats go in and portals that help you navigate a level. There will also be occasions where you will need to use a lantern which reveals what’s hidden in the scenery. There are 90 levels set across four seasons in I and Me. You will need to think carefully after the first few levels because the levels, once figured out, can still be difficult to complete because it is hard trying to navigate two characters at the same time in areas where there are lots of moving parts. There are twenty scrolls to collect that add some more information to the back story, collecting these also open secret levels, there’s only a few extra but they add a little more playing time to I and Me. 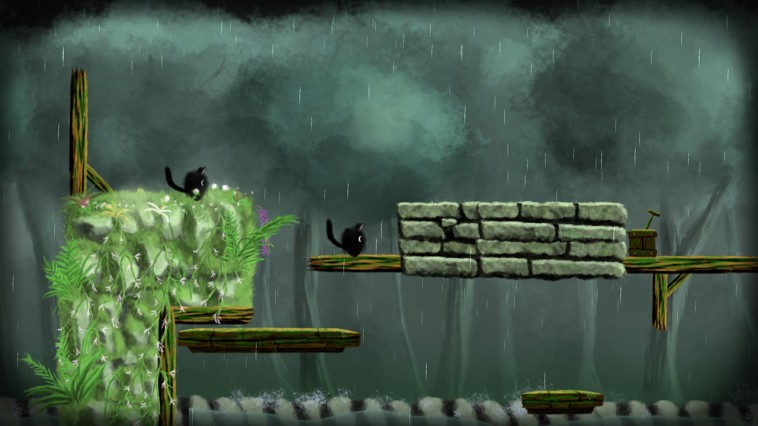 Graphically, I and Me is a beautifully sombre looking game. Each season looks  accordingly and nothing looks out-of-place, even the frames which you use to complete a level. The two little black cats are easily identifiable against the environment whilst all the obstacles are plain to see besides the times you have to use a lantern. The key to getting through I and Me is timing, you will need to analyse the situation before embarking on your attempt. Thankfully there is a hint system in place that will show you what you will need to do. Musically the soundtrack to I and Me is a mixture of soothing orchestral and piano music. There is a story behind I and Me but the scroll font is not easy to read and to be honest it’s not very clear what’s happening, it doesn’t detract from I and Me, but it’s just slightly frustrating not knowing why you have to do the things you need to do.

I and Me is a clever, if not too difficult, platform game. The general ambience is quite comforting throughout, I and Me is definitely a title that will relax you, if your cats die a few times you might lose that sense of calm but at least it’s there at the start. I and Me is a charming little title which will help pass the time on a rainy day.

I and Me Review

If there were another me, observing myself from the perspective of a spectator, how would I regard the other me?