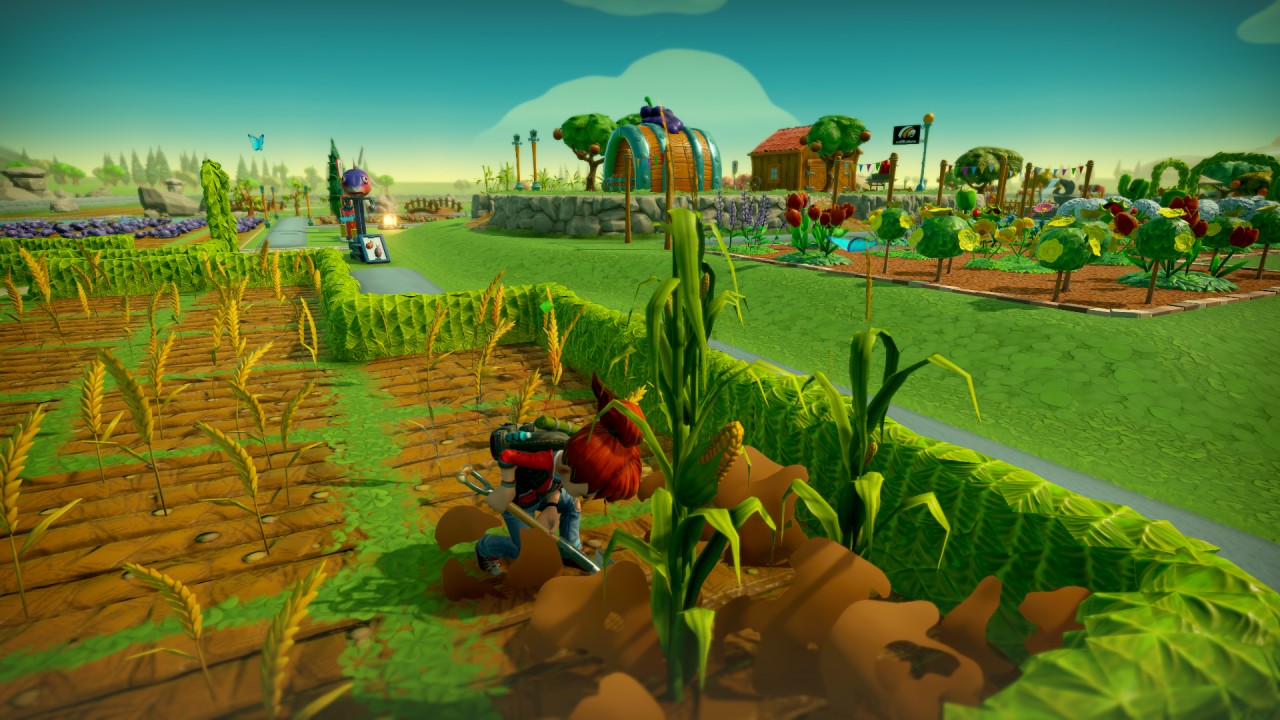 From the moment I played Minecraft for the first time, I became a huge fan of games with farming. Then Stardew Valley came along and I spent nearly as much time with it, maxing out my friendship ratings with everyone I could, fighting my way through the mines, and becoming an expert farmer and fisherman along the way. I’ve played some other unique farming games along the way, like Deiland, but there have been plenty of games that were just meh as well. I originally assumed Farm Together would be another “just okay” game when I first saw it, but then someone I trust actually put it in the same realm as Stardew Valley, and I had to try it out.

Farm Together throws you into a blank canvas of a farm and lets you go wild with it. You get the center rectangular space out of a massive 5×5-rectangle grid to begin with, which is more than enough for the selection of crops, trees, animals, fish, buildings, and decorative items you can throw down everywhere. The tutorial is rather lackluster, but you’ll quickly discover two facts: there’s really no “wrong way” to play as practically everything you do will earn you a return on your investment sooner or later, and everything in the game is based on a real-time clock.

That isn’t to say that days cycle in a certain amount of time like in Stardew Valley. Crops, animals, flowers, fish, and buildings in Farm Together all work on their own cycles. Carrots take 20 minutes to grow, for example, while watermelons take two days. Andalusian donkeys need to be fed every 45 minutes, and you can “harvest” them after feeding them twice. Meanwhile, seasons pass every 17 minutes, which control potential weather effects, the types of crops you can plant, and which trees you’ll be able to harvest. At first, the aspect of a farming game working in real time like this was worrisome; I wanted to dive in head first and play nonstop, not run around a bit, plant some stuff, and come back at night to play for 20 more minutes before bed. 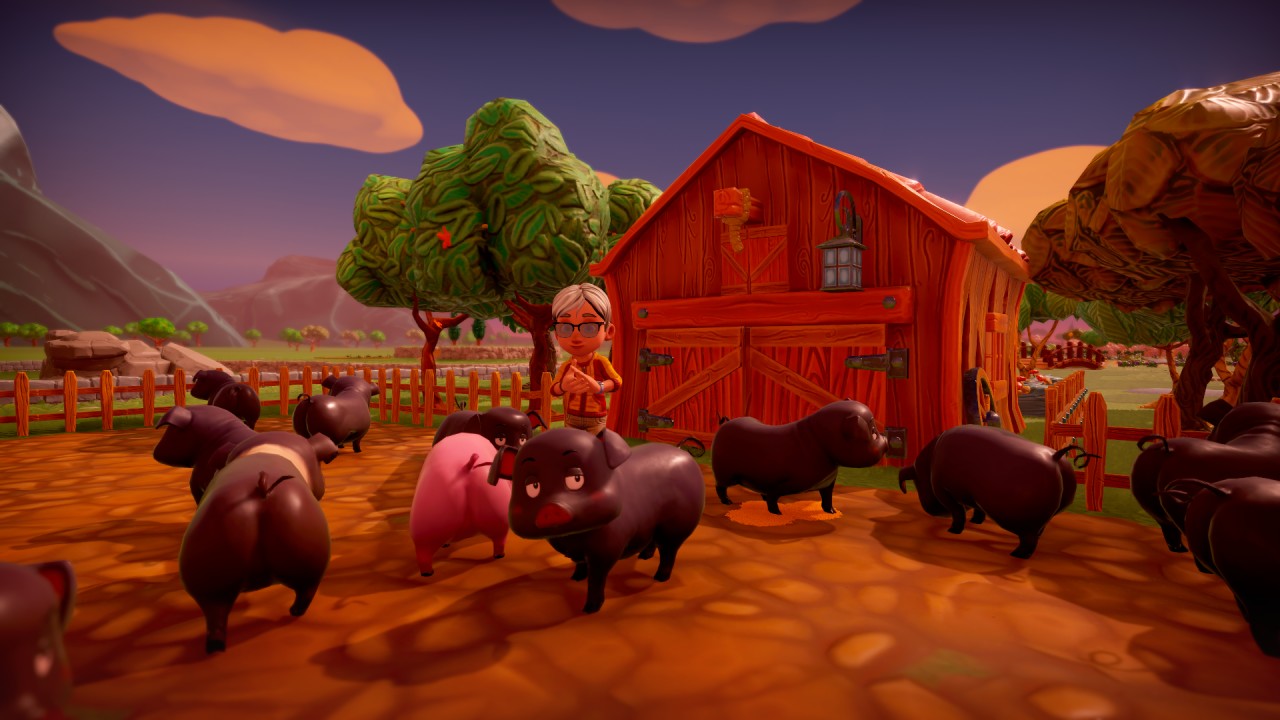 Luckily, Milkstone Studios clearly didn’t want people stuck playing that way either. A great farm has a blend of various types of resources, and most of them require interaction to get the most out of them. Animals must be fed regularly, fish and crops have to be fished and harvested respectively after a set period of time, an assortment of trees means income every 17 minutes, and flowers must be watered every so often to earn the maximum amount of money from them. Crops need to be watered too, and watering them reduces the amount of time remaining before you can harvest them. In fact, if you plant enough of something super quick, like lettuce which only takes 10 minutes, you can essentially run through them nonstop until you can harvest them. They’re great if you want to continue playing for an extended period of time, and they’ve still got an excellent return on investment. At the other end of the spectrum, watering something that takes a day or two knocks hours off of them!

Then there’s the leveling and unlocking systems in the game. Essentially everything has a level associated it: you do, your farm does, and every single crop, tree, fish, flower, and animal does. Leveling the farm up felt most important to me as it unlocks all sorts of new things, including buildings that do special things like store more of each item type and trade various types in for diamonds (another type of currency). Leveling up your harvestable items gives you more money each time you harvest them, and sometimes you’ll need to level up something to unlock something else. For example, an Azoychka tomato requires you to have a farm level of 14 PLUS tomatoes at level 12 and beefsteak tomatoes at level 8. These systems guarantee that you’re unlocking something new or otherwise being rewarded consistently, and it’s terrific to always feel like I’m accomplishing something!

All of this creates a system that works for all sorts of players: you can be satisfied diving into the game for hours and playing nonstop, but you can also set things up overnight or however long you’re away from the game so that you’ll have lots to harvest when you get back to it. The farm gets ridiculously huge as you play, to the point that you can easily have hundreds or even thousands of crops that take an extended period of time while messing around with fields of quick crops too. As you progress you’ll also unlock the ability to use your tractor, which can prep, plant, water, or harvest a 3×3 square, and you’ll also be able to place “points of interest” that you can instantly travel to at any given time.

Farm Together also has events that happen every so often. There have been at least two that I missed: the Fishing Contest and Starry Harvest. Starry Harvest had players earning decorative items by growing and harvesting Shooting Star crops, and the Fishing Contest had players unlocking items by, you guessed it, catching fish. Another event started a little over a week after I started reviewing the game: Lucky Harvest. This event challenged players to plant and grow loads of four-leaf clovers, each of which takes two hours to grow. Some steps unlocked flowers that can be planted and harvested, and as the quest progressed, collecting the flowers was necessary as well. The quest had steps, and as each step is completed, permanent rewards are earned including cosmetic items and even flowers you can grow. The green top hat is frickin EPIC, and I don’t see taking it off of our character for a long time. 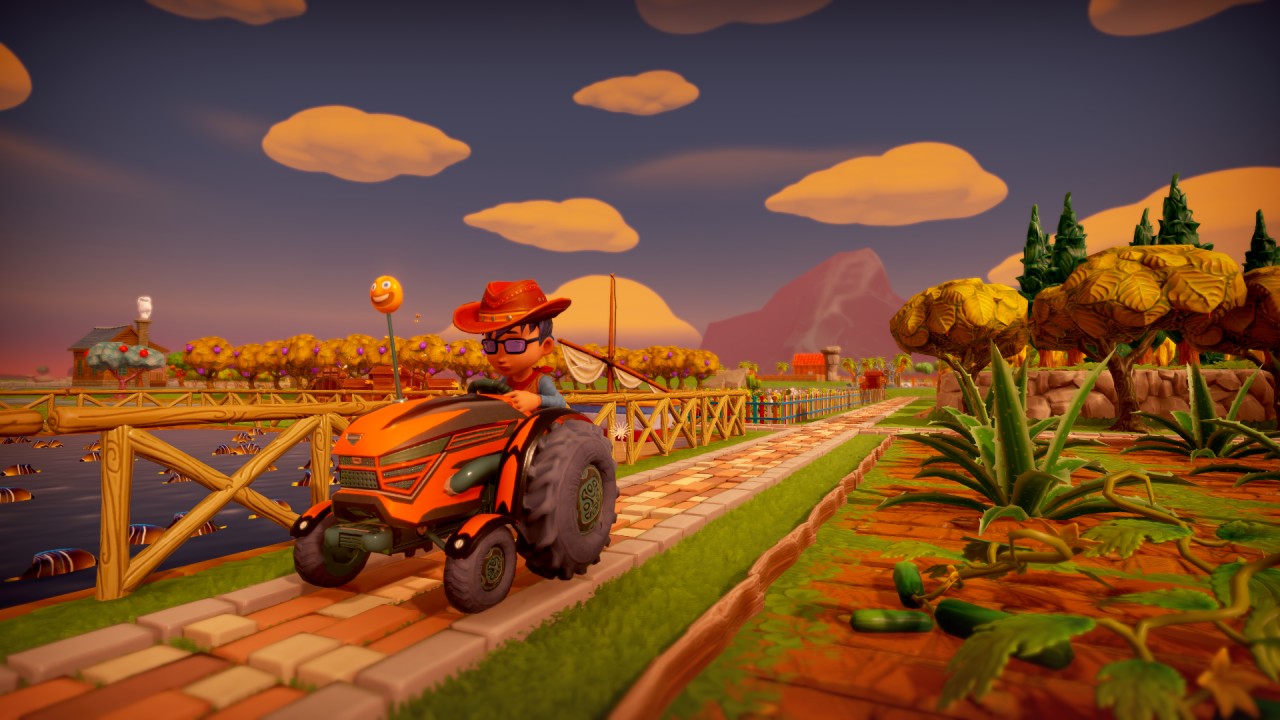 For those wondering why the game is called Farm TOGETHER, the game has a multiplayer aspect to it. Sadly you can’t play split-screen, and there isn’t crossplay, so if you want to play with someone locally you’ll have to have two of the same console. Because the “together”-ness is online-only, you also have to have online service on your console to do any of it. Finding random farms to join is easy, and it’s easy to restrict or enable what actions visitors can take. There’s a lot of added fun joining a friend’s farm and working together, and your own character gains levels too, which carry over to any online or offline farm you’re in. So if you’ve got buddies you play online with, you can hang out with them when they’re online and then work on your own farm when they’re not.

There’s definitely a lot to Farm Together, and it’s a game I can definitely see playing for a long time to come. It does have an addictive quality to it, though, in both good and bad ways. If you’re easily hooked on games, Farm Together may be a dangerous game to dive into; the fact that the game is ALWAYS running means that you may feel like you’re missing out on making money while you’re away, or knowing that all those super valuable Graffiti Cauliflower plots are ready to be harvested while you’re still at work or school. But as long as you can feel comfortable playing it when you want, it’s a terrific game with a lot of meat on its bones. It’s also got a lot of polish: the graphics are super cute and the camera works perfectly with numerous levels of zoom and a photo mode that zooms WAY in, putting everything on your farm into an entirely new perspective.

But there are still some things I’d love to see happen, and chief among them is a fix for the glitch with changing seasons. At least four times during our time with the game, the season has changed to winter and there’s been a weird glitch that makes nearly everything white, like a blizzard rather than just snow. It’s so bad that the game has to be restarted, and something similar happens when it rains as well. It doesn’t happen every time different weather occurs, but it’s certainly enough to be annoying. I also would’ve loved more tutorial in the game as well; there were several things that I didn’t learn about until way later than I should have, such as the ability to warp to points of interest or the importance of building a house. Finally, having the house takes nearly 4 days – which is a shame since there are several unique tasks – and an entirely separate currency – that only exist within the home. I would’ve loved it if the starter home took only a few hours at most, and then the bigger, nicer homes took longer to make.

With all of this said, Farm Together is an easy recommendation for folks who love farming, even with the handful of flaws I came across.

Whether solo or together, this is a farming game that is simply enjoyable to plough through.