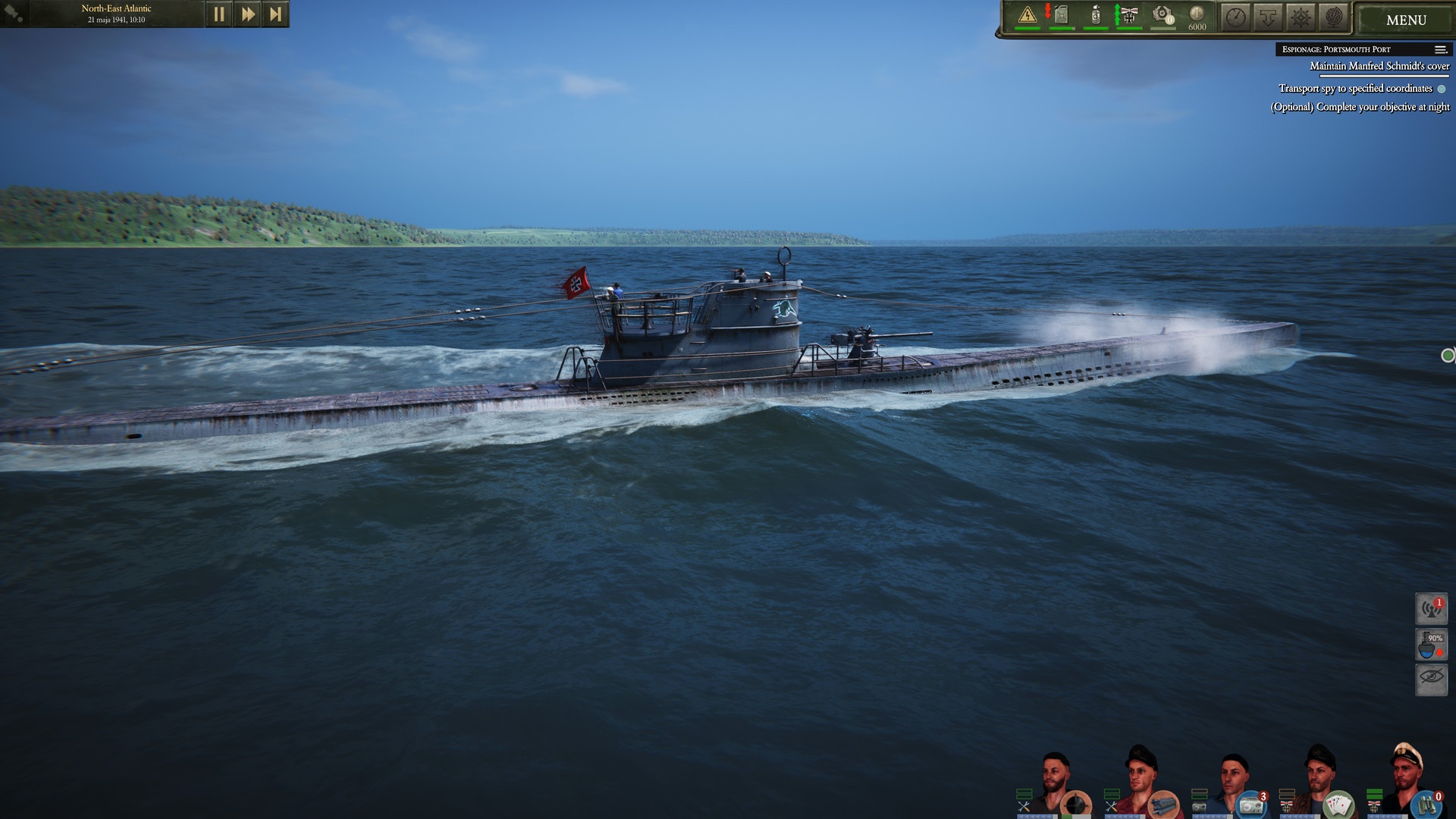 After a successful Kickstarter campaign, way back in June 2016, Deep Water Studio is finally releasing UBOAT into the wild, onto Steam’s Early Access. For those who might not know, the name, UBOAT, is a reference to the term U-Boot, assigned by the German Navy to its submarines. Therefore, UBOAT is obviously a game where you’re in charge of a German submarine during World War II.

While UBOAT is a simulator first and foremost, it is not only a game about the actual inner workings of a U-Boot and commandeering one, but it is also about managing your crew, by making sure that they’re doing their jobs, keeping them fed, and entertained. You’ll be able to explore the richly detailed interior of a Kriegsmarine U-Boot, where you control different officers and assign them to specific duties in order to keep your U-Boot up and running at all times.

Currently, the game only offers a short tutorial and a sandbox mode, but a follow-up to the story of the crew that you control in the tutorial is in the plans. The sandbox mode allows you to take on missions that will take you all over the Atlantic Ocean, manage your credits and inventory, upgrade your submarine, as well as hire new crew members. There are a series of random events that can occur while you’re out on the seas, like a crew member getting infected with tuberculosis, or unforeseen occurrences that change your mission objectives without any warning, forcing you to adapt on the fly. These things help to break the monotony that is travelling quite a bit, but other than that, the game is a simulator through and through, in the sense that there isn’t much to see here if what you’re looking for is some sort of plot. 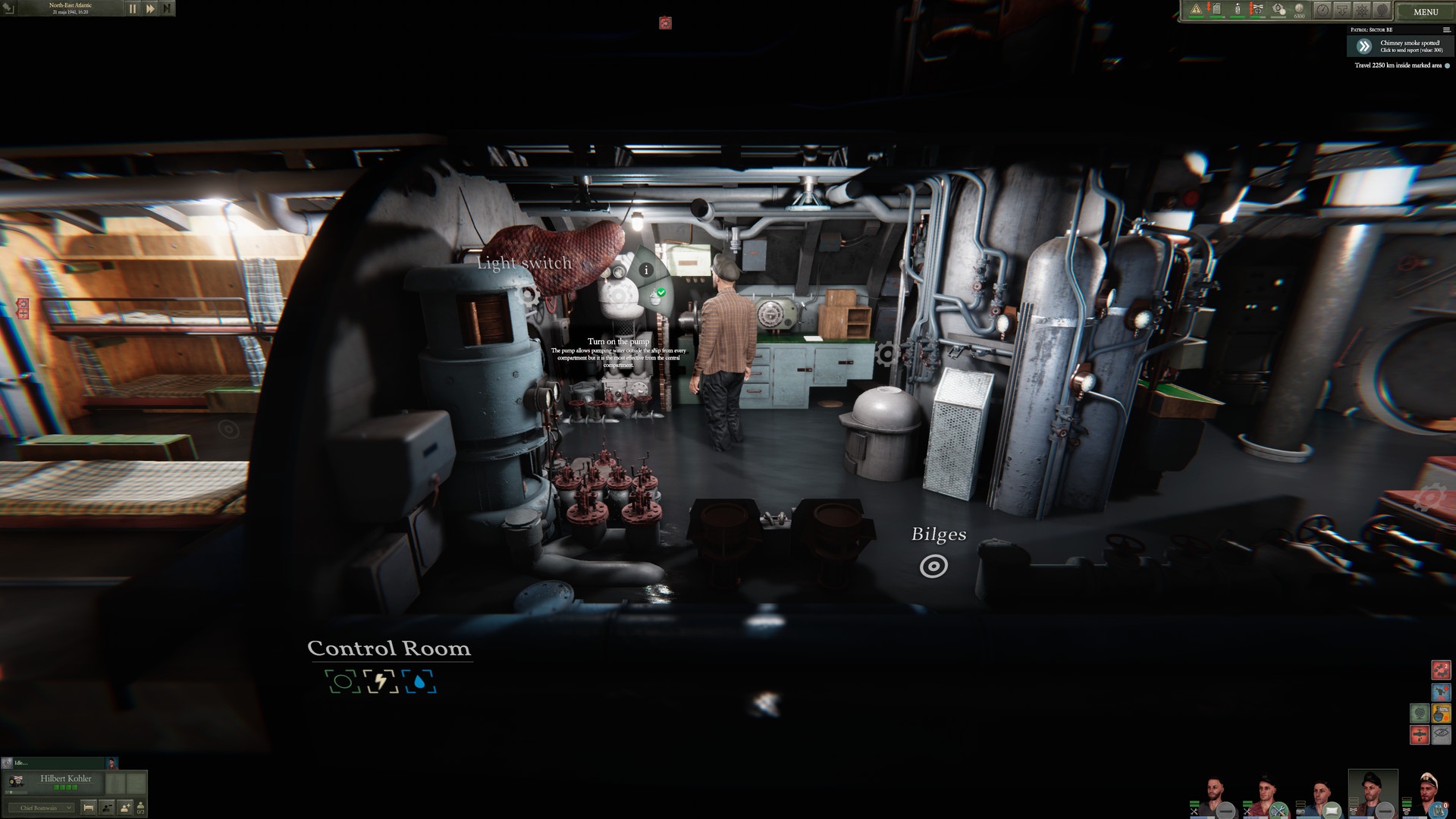 Even though I have never played a submarine simulator before, I’ve been having a decent experience with UBOAT so far. If you’re aware of how an actual submarine operates, then I’d say that this is pretty close to the real deal. You’ll be assigning specialized officers to things like the hydrophone, periscope, targeting enemy ships and firing torpedoes, fixing leaks and sealing compartments to prevent flooding, pumping out water from flooded areas of the submarine, repairing different stations, changing engine speed, diving to the safety of the ocean depths or preying on the surface, or even dealing with enemy aircraft by using anti-aircraft guns on your deck.

The managerial element comes into place by being able to assign crewmen to help your officers perform their task more efficiently, like working on the engines to consume less fuel, or loading up torpedos faster. In any case, I found these tasks to be easier to perform when playing from the section side view of the submarine, instead  of the first person perspective. The game mentions that each view has its own advantages, but I honestly couldn’t find any benefit to playing on first-person.

While managing your crew and keeping track of your enemies is all fun and games, most of the time nothing will really be happening. A lot of time will be spent staring at the world map, where you can set up waypoints and plot your course to wherever you want to go. Sometimes you might trigger some random event, pick up a radio transmission that provides new orders, or hopefully, you’ll find some enemies to break the loneliness of the sea, but other than that, there will be a lot of downtimes. 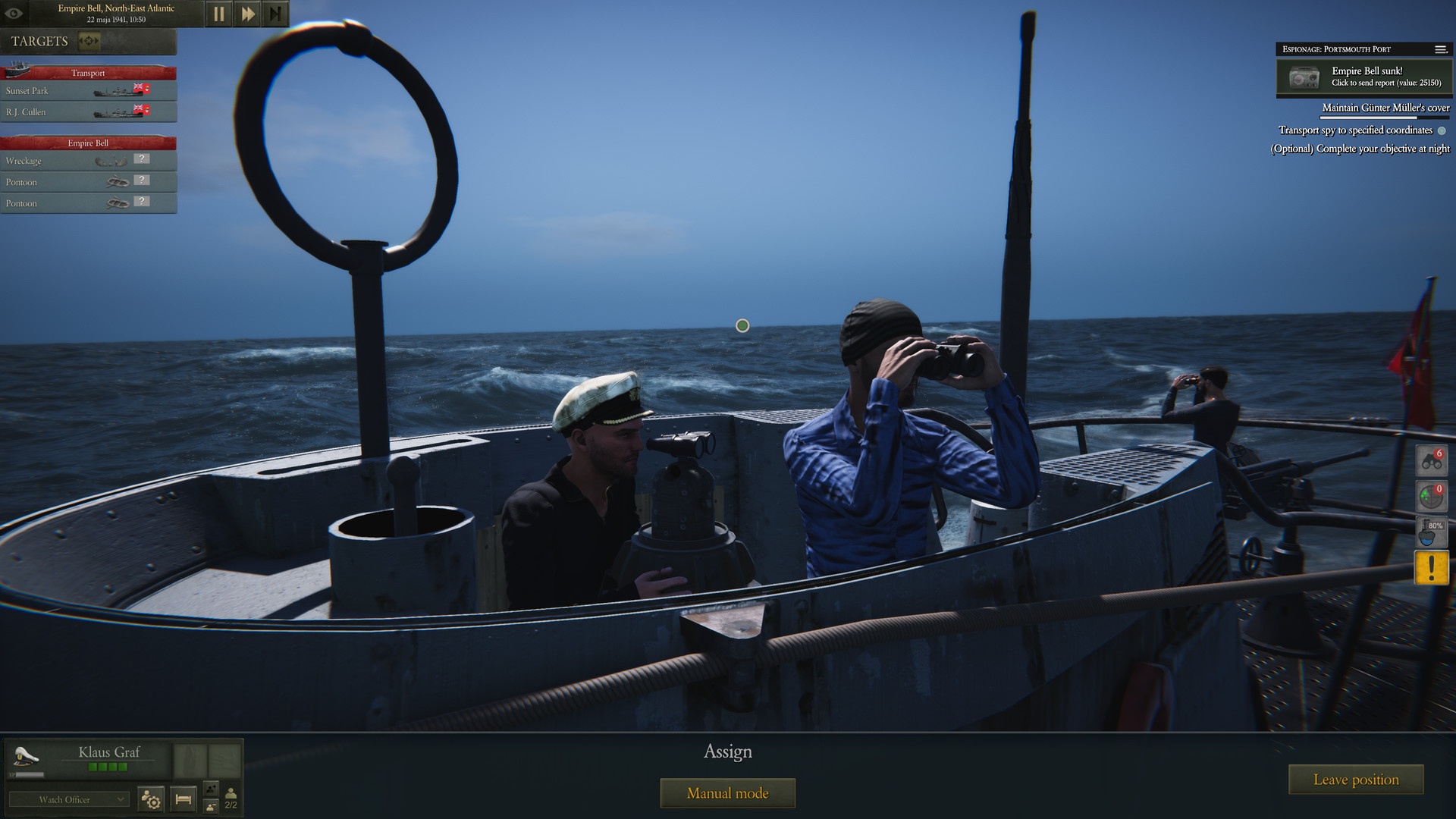 Unfortunately, the game has its fair share of bugs at the moment. One time my submarine got stranded on a beach, even though the plotted course was clearly not set towards land. Sometimes, the automatic course plotting can also ruin your day, as it has no problem sending you straight inland or crashing against the pier, so you better double check the whole course just to make sure. Why would it even do something like that? Then there’s changing between the orbit/map view to the section side view, which for some reason doesn’t feel like it works most of the times, or perhaps this is not really well explained in the tutorial, or I might have just misinterpreted what the game told me. In any case, it’s inconsistent, unlike the long loading times.

I’ve also experienced a rather peculiar bug, where one of my officers got stuck on the bed after recovering from tuberculosis. Overall, NPC movements are pretty wonky, and a lot of times they end up getting stuck on the walking animation while trying to move, even though they’re going against something like a wall or a player controlled character. It’s clear that the game still needs a lot of polishing.

UBOAT is certainly a promising game, at least in terms of concept, there’s no question about that. This is especially true since it’s only one out of two games to have come out recently that fit this niche genre of submarine simulator, with the other title being Wolfpack, which is focused on co-op instead of single-player. With that said, UBOAT still feels like it has a long way to go, and even more so since it feels particularly clunky and it has a few nasty bugs. Given its price, I’d honestly rather wait to see how it fares in Steam’s Early Access before picking it up. If, or when, the bugs have been ironed out and the game has a little bit more structure and endgame to it, I would definitely recommend getting it on PC