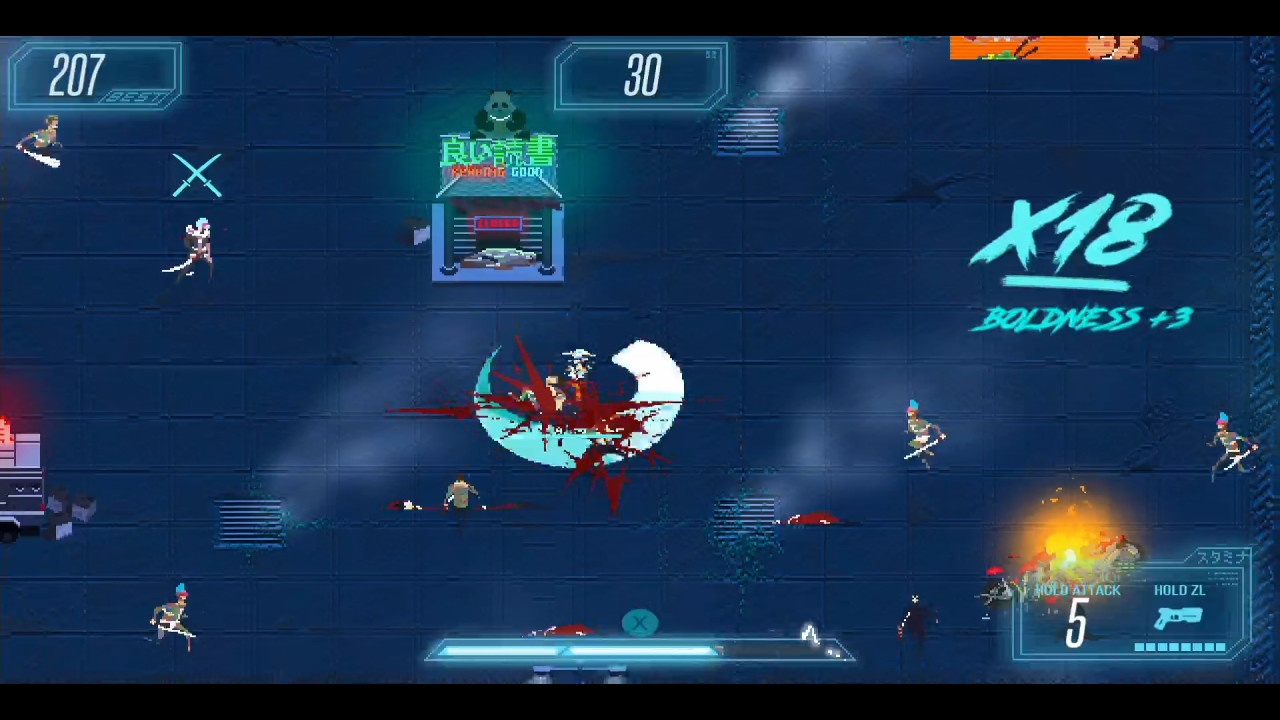 When you don’t have a plot to drive a game forward, things can sometimes get a bit cloudy. There was a long time where you didn’t need to have a story to inspire people to play your game, but those days feel like they’re long in the past, unless you’re specifically going for a retro design and that’s a whole different barrel of worms. But what if I told you a single word could be enough to make players dive into something, headfirst, without needing to know more? It’s the shortest story ever told, and one that’s echoed throughout history on the tongues and teeth of the wealthy and poor, the noble and the savage, for as long as time has provided more than one human being. Ludic Studios knows this story well, and it’s told in their bloody, neon-soaked arcade slasher Akane. That word is revenge.

You don’t need to know who or what wronged Akane, but it’s nice to play the “tutorial” to see a bit of the background that was young Akane learning her techniques. At the turn of the 22nd century, Akane accepts tutelage from an unnamed master to teach her the ways of the sword and the gun. Then, jumping ahead 20 years or so, Akane stands in the empty lot somewhere in Neo Tokyo, vowing to take as many bodies with her before she breathes her last. And, with that, the action begins, and you, the player, are plunged into a pull-no-punches arena of pain and suffering as the game drops you into instant danger. Oh, if you didn’t play the tutorial, you might not know the controls and also instantly die, so consider at least taking a quick playthrough so that you know the difference in the controls. 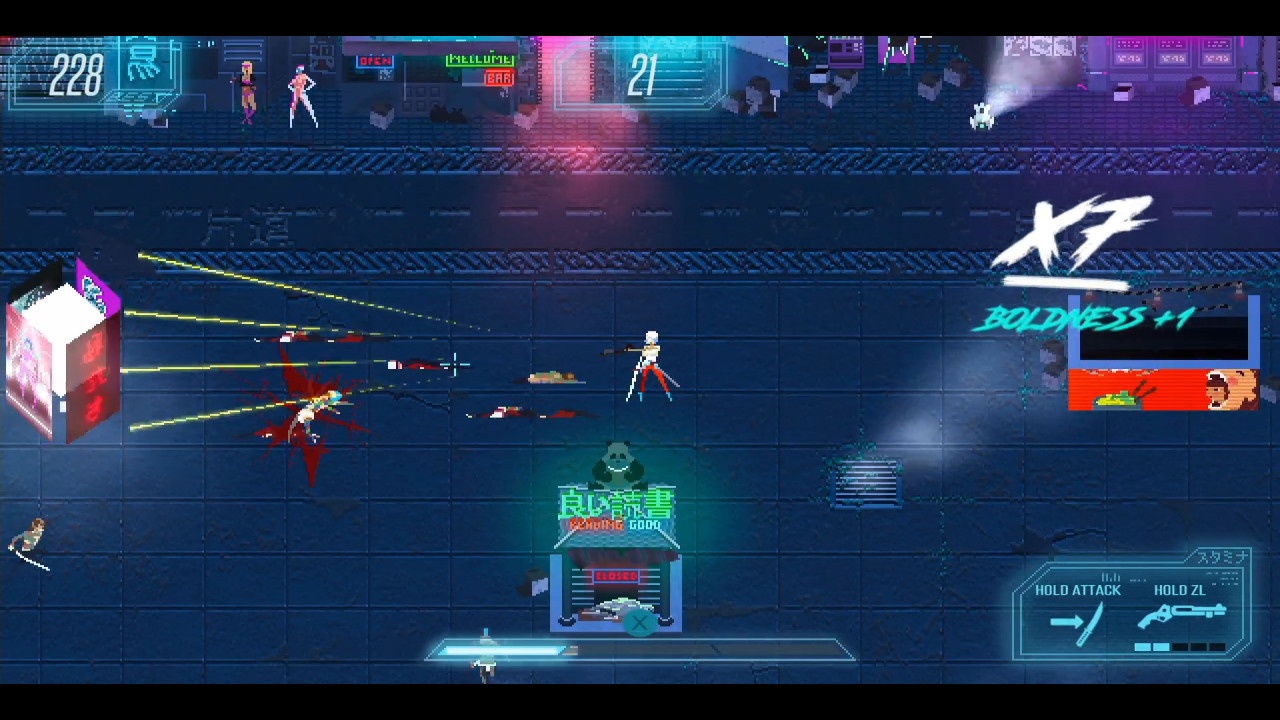 As an arcade slasher, Akane basically has one mission: kill as many people as possible. I have no idea if the game has an ending because it just keeps going, and my fingers got pretty tired after about 400 or so bad guys. Basically, grunts will continue to appear from all sides of the screen, and there isn’t just a simple flavor either. There’s the guys in suits and tattooed punks who just try and rush you with swords, sure. Then there’s the assassin who’ll alert you with a pink cross-hair above his head before taking three very tactical shots your way. There are these massive beasts called Tanks that need about six hits to go down (or one power move). And then there’s the boss, a cyborg ass named Katsuro, who continues to come back to life after every 100th enemy you kill. Katsuro also evolves as you kill him, learning new techniques and approaches till he’s finally this absolute nightmare, doing fast dashes, powerup strikes and firing bullets at you just as calm as can be. Thankfully, Akane didn’t come unprepared.

When you play Akane, the first thing you notice is that a lot of the game is all about rhythm. You get into a groove playing, because it’s the only way to survive. Dashing and slashing both use stamina, and it won’t be recharged until you stop moving. Shooting bullets takes out enemies from afar, but you have limited ammunition and can only recharge it by slashing people up. You’ve got two great power moves that each require you to break your rhythm in order to pull them off. You’ve got this dashing slash that’ll kill anything in the path you choose (including those Tanks) but you need to line up the direction with the R stick, which is on the polar opposite of where everything else is happening. If you charge up your power meter all the way, you can do this omni-directional dragon slash that should kill everything on the screen, but it means charging up your meter all the way and avoiding dying in the process. You can also block, but I think I *only* blocked when it came to Katsuro, and only because I learned the hard way that it’s how to break his swings and actually defeat him ONCE.

Akane evolves as you play it, as well. You get to unlock new gear by doing achievements, like getting 30 kills in a row with 100% katana accuracy, or just beating the boss for the first time, and there are a ton more that gradually change your play style. Each piece of gear is a tradeoff from what you have, and so you really get to mix and match as they come. For example, the different cigarettes you can unlock don’t appear to do anything (I think?) except change your trail as you dash to a different color. Well, I love orange, so that was a no brainer. But then the synthetic adrenaline that slows down time when I get into “adrenaline” mode from doing the special dash attacks was a pass for me because I very rarely used those attacks unless I needed to. Oh, and the second sword you unlock, where you can do a spin-attack like you’re Link in A Link to the Past? I was all over that, and used it a TON to clean house instead of using the dragon slash like I should have. 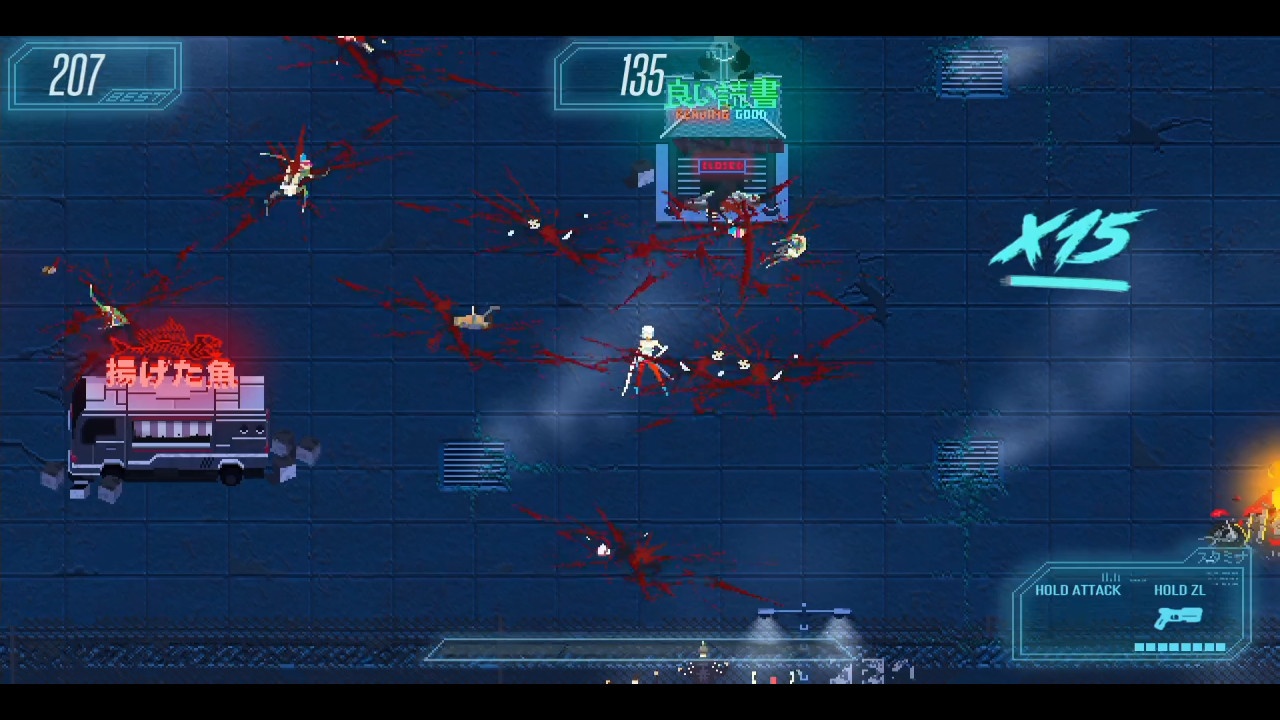 Akane is all about style over substance, though. Even though there’s not really a game to speak of in terms of finality, the enjoyment of the chaos and the brutality is beautiful. Things like Crimsonland are a bit in the past for the Switch, but adding something that’s got some of that murderous flair really work so well. The backdrop of a dystopian Japan is tried and true, and there’s serious hell to pay in the eyes of Akane. Everything pops so well, and the pixel art design gives this an appropriately gritty edge that evokes the right mindset for the cyberpunk, street samurai sort of lifestyle we see on display. When things go right, they go SO right. It’s great to block a sword swing with your own, but it feels right when you slash at the same time and the sound of a parry rings strong in your ears. Deflecting bullets from the assassin to shoot another bad guy instead just makes me giggle, and when you don’t even block, but you slash that bullet out of the air? Freaking amazing. The button mapping for everything EXCEPT the power-up attacks make total sense, and your movements just become fluid as you seamlessly toggle between shooting, slashing and dashing to safety. You feel like you gotta drop everything to do that dragon slash, so might as well make the most of it and take down everything in one button-mashing swoop.

Akane positively bursts with savvy as the driving soundtrack thumps in through your speakers or headphones, filling you with energy and anxiety as you both have to keep your head up and grimly admit that this ends only when you, not they, are dead. The music is an old-style of industrial techno with occasional intermixes of synth and what sounds like movie clips, like the designers took cues from the Wu Tang Clan and wanted to add that extra air of homage. When you finally charge up enough for the dragon slice, a short, animated closeup of Akane plays, showing the determination and exhaustion on her face. You live and die and live again, swapping out weapons and boots for something different, add more stamina, try the uzi instead of the handgun, make those bastards pay harder and harder with every incarnation. Is there an ending? Maybe. But I’m not there yet, and I don’t know if anyone is.

Akane is brutally difficult in terms of sheer swarming and needing to balance movement with recharging, trying not to get pinned down because a single mistake is all it takes to end your run. Yet there is so much class and, dare I say, elegance to the routine that you run that it’s impossible not to enjoy and to be impressed. As there is only one arena to speak of and no story mode present, the game might seem a bit skimpy, but there is so much to do in that small, cramped alley that’ll ultimately be your grave. It’s a damn fine experience, and I encourage anyone to give it a try if you like to use your last breath to spit in the eyes of your oppressors one more time.

Brutal, bloody, elegant and fluid, Akane delivers such a tight and satisfying experience that the only downside is how there isn’t more to see.