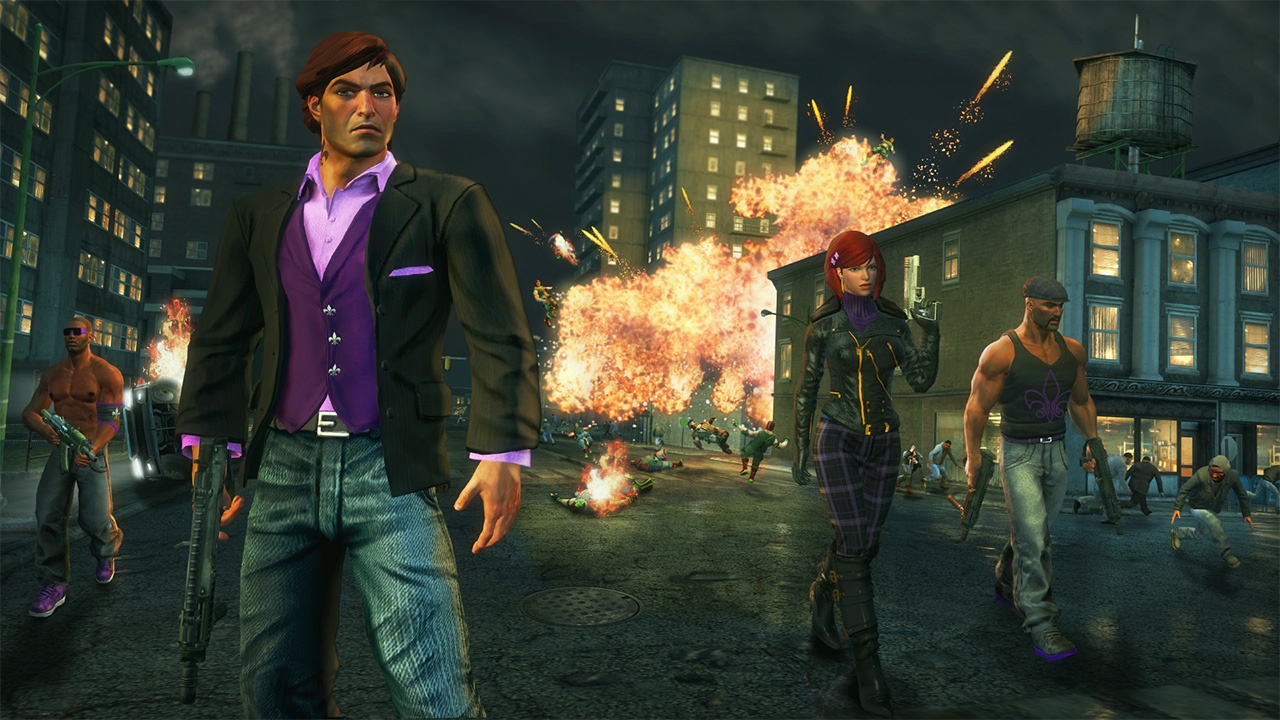 A few months after the launch of the Nintendo Switch and when its first influx of AAA titles began to port over to the system, I noticed an ever-growing demand from a series of forums for Rockstar’s Grand Theft Auto to appear on the console. Alas, it’s now been two years since those days and Switch owners are no closer to running the streets of Los Santos, or even San Andreas. However, not all is lost as Koch Media and Volition have delved deep into the treasures of their back-catalogue to bring us Saints Row: The Third – The Full Package as it gangs up to bring its destructive, yet madcap, mayhem to the streets of the Nintendo Switch.

In terms of creating a sandbox playground in which to cause complete chaos, there’s no better way than to do so as within the world of Saints Row. Admittedly, it was never a series that was never able to match-up to the success of Rockstar’s games, but with its tongue-in-cheek humour, over-sexualisation and gratuitous violence, it was easily the most fun you could have in replicating its blueprint and under those terms, was a far more enjoyable game to play. It’s in this context that Saints Row is best approached. Don’t take it seriously and certainly don’t take yourself seriously either. Just go out and cause all manner of destructive mayhem, just make sure you have fun doing so.

This third, and arguably the best, game of the series follows the exploits of Johnny Gat and a few of his fellow members, who have grown the Saints Row franchise into a multi-million pound organisation. However, a rival corporate gang, as well as a few smaller institutions have muscled in on their territory and following a flunked bank heist, the trio of Saints Row members soon find themselves down and out on their luck. Forced to start again within the city limits of Steelport, your task is to rebuild your empire, fight off the threat of rival gangs and position yourselves back in the number one spot of ruling empires. 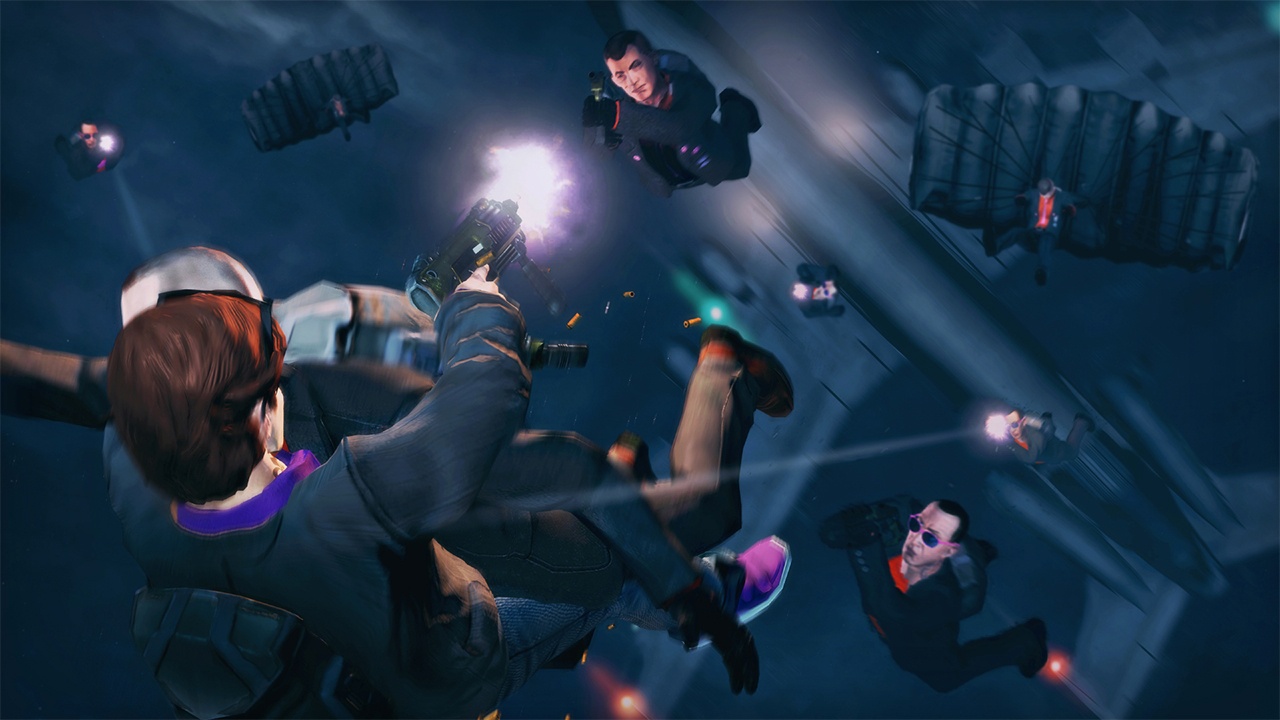 Much like the Grand Theft Auto Games, Steelport houses an extensive playground in which to play, its main setting splits into a series of sub-districts and islands; each one housing a wealth of properties to own and businesses to extort, as well as a host of main and side missions, races and challenges that builds your finances and gains you respect. These soon become important assets on your journey back to the top, as with finances you can buy properties and businesses, each one adding to your monthly income or providing a service such as plastic surgery or weaponry, as well as providing you with safe houses with the purchase of ‘cribs’.

Before long, you start to acquire more wealth and luxury, from penthouse apartments to your own personal VTOL jet aircraft. However, with this ‘Full Package’ version of the game, you also get a wealth of DLC with a series of story missions, extra weaponry, vehicles and all manner of customisable options. It’s here where the fun of Saints Row lies, with an overwhelming amount of options with which to outfit your characters, from a hot dog to a space princess and the now infamous, Genki oversized head. There are also a series of madcap missions from Professor Genki, each one playing out like a series of crazy television shows.

There’s a vast amount of content within the game to keep you entertained, from the variety of vehicles with condos to sports cars, motorbikes to tanks, as well as helicopters and jet fighters; they’re all here and instantly available for you fly and drive. As well as all of the checkpoints dotted around the city that signify properties, stores or missions, there are also a number of hidden objectives to find from photo opportunities to seeking out a rather elusive shipment of adult toys. The range of weaponry is also delivered in a vast scale with pistols, shotguns and rifles, all the way to grenade launchers and drones which produce a barrage of guided missiles. Heck, there’s even a baseball bat that’s shaped like a certain part of the male anatomy. 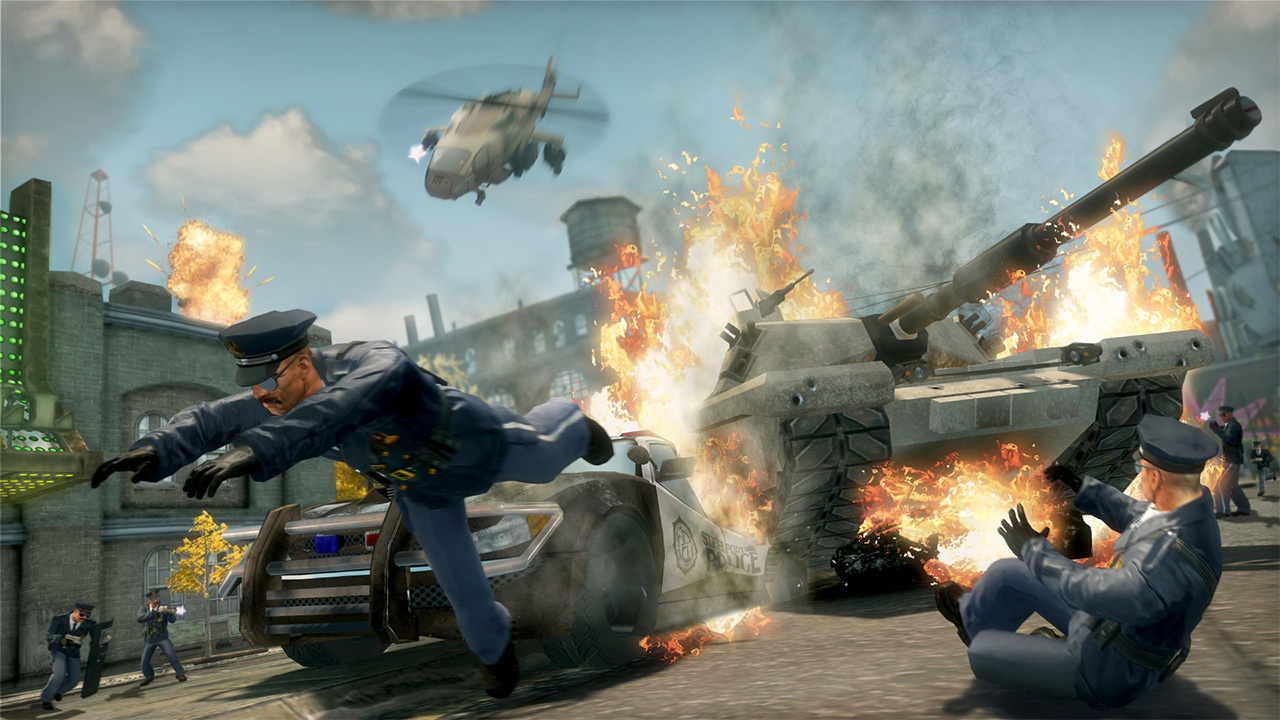 In terms of sexualisation, there’s a lot of it here, making this a game that isn’t really ideal for a younger audience. Strip bars and pole dancers, adult toys and even a mission that requires you to have a sex change. Some may find its content offensive or inappropriate. However, for most, it just simply adds to the seedy backstreet nature of the game, as well as provide some form of humorous entertainment; you simply can’t help but laugh as you run riot in the streets of Steelport naked, swinging your male-anatomied bat around in the face of rival gangs. It’s simply a game that you can play as you want to. Want a serious, hard-as-nails character? Then you can create one. However, if you want to be the meanest hot dog in town, then you can be.

However, with so much variety in cosmetics and mission structures, there are a few instances where the difficulty spikes to a frustrating level; especially when faced with tank-like characters that simply rush you or protection missions that test you to the best of your abilities. These can often be exasperated by some of the game’s mechanics that begin to show its age. There’s no cover mechanic here that many modern games possess, you simply have to crouch behind objects or hide behind corners to take cover from damage and the aiming mechanics and control sensitivities can feel slightly off at times. This can be further hampered by some technical issues too, with stuttering frame-rates when the action gets too hot and a couple of instances where I simply had to restart the game after getting stuck in scenery or the game failing to load the next segment of my mission. Admittedly, they don’t happen too often, but they are most definitely there.

Overall, Saints Row: The Third – The Full Package delivers an experience as close to GTA as you’re currently going to get on the Switch. If you’ve been itching that particular joy-ride, then this is game that will surely scratch that craving. It’s pure unadulterated fun, although it does show its age slightly, but with so much to do and see within the game, it doesn’t really become an issue. A few technical issues and old-fashioned mechanics aside, this really is an entertaining game and with all of its DLC bundled in, plus the ability to now play the game in co-op, both locally and online, there’s no reason why you shouldn’t fall for its violent, but often hilarious, charms. It’s by no means perfect, but at the time of writing, there’s also nothing else quite like it on the Switch and in those terms, makes it a title worth purchasing.

When it comes to the open-world of madcap violence and humour, Saints Row: The Third contains the full package.