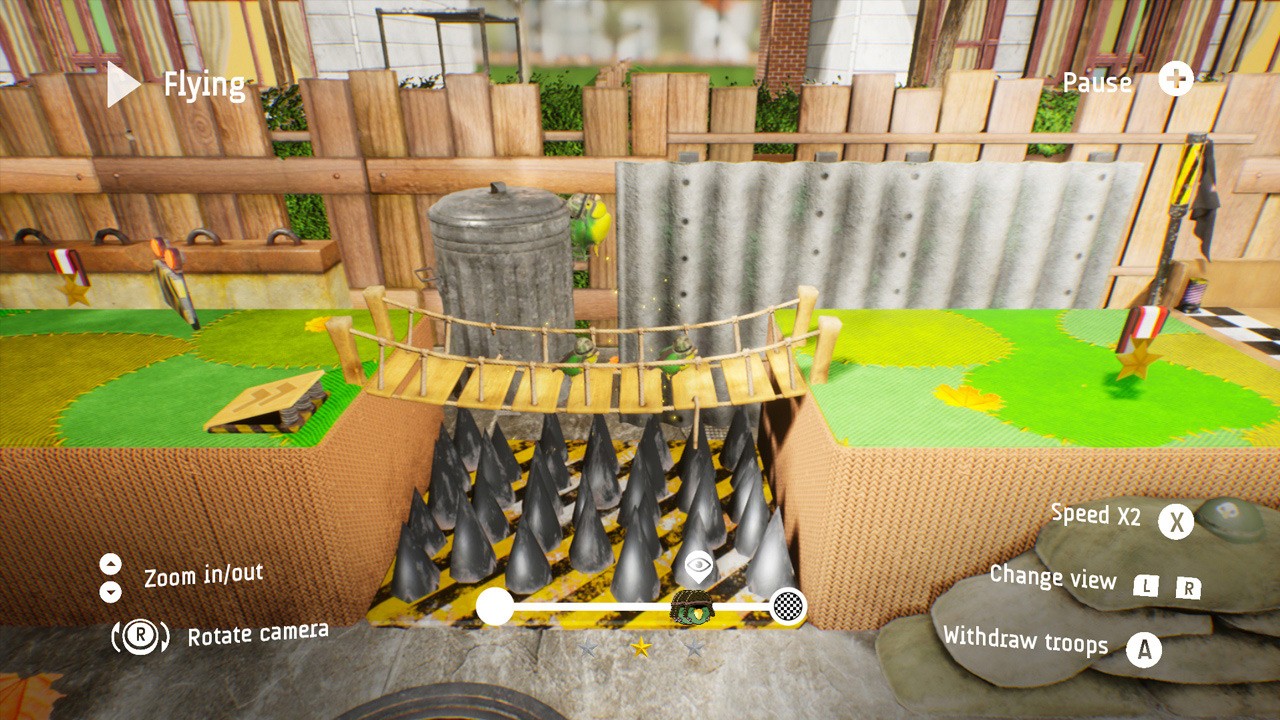 I am very new to the form of gameplay, which Flying Soldiers utilises. Reminiscent of mobile puzzle games and those of a hyper casualised nature, this strategy game will certainly ruffle the feathers of any first-time player. In what could be accused of being the worst military ever, the player will guide these flying soldiers with beaks and wings to safety.

The game is very simple in its mission. You set up objects and tools to guide your bird-soldiers through increasingly hazardous terrain. But these soldiers are rather… limited in their abilities. Unable to glide more than a few inches before landing back on the ground, it’s up to the player to save these birds from spikes, electric shocks, pits and dangerous terrain. This game is a great introduction to strategy games for the uninitiated to the genre. Your resources to alter the trajectory of your birds on their path are limited and develop as the player progresses through a total of 45 missions. I found that the upgrades throughout the levels were paced well and did not make any level too difficult to overcome after some pre-planning and resource management. With multiple types of birds, the player has to be calculated and think ahead to achieve each goal. Collecting medals was fun and made the stages that bit harder, which definitely added a lot more playtime to the comparatively short title. 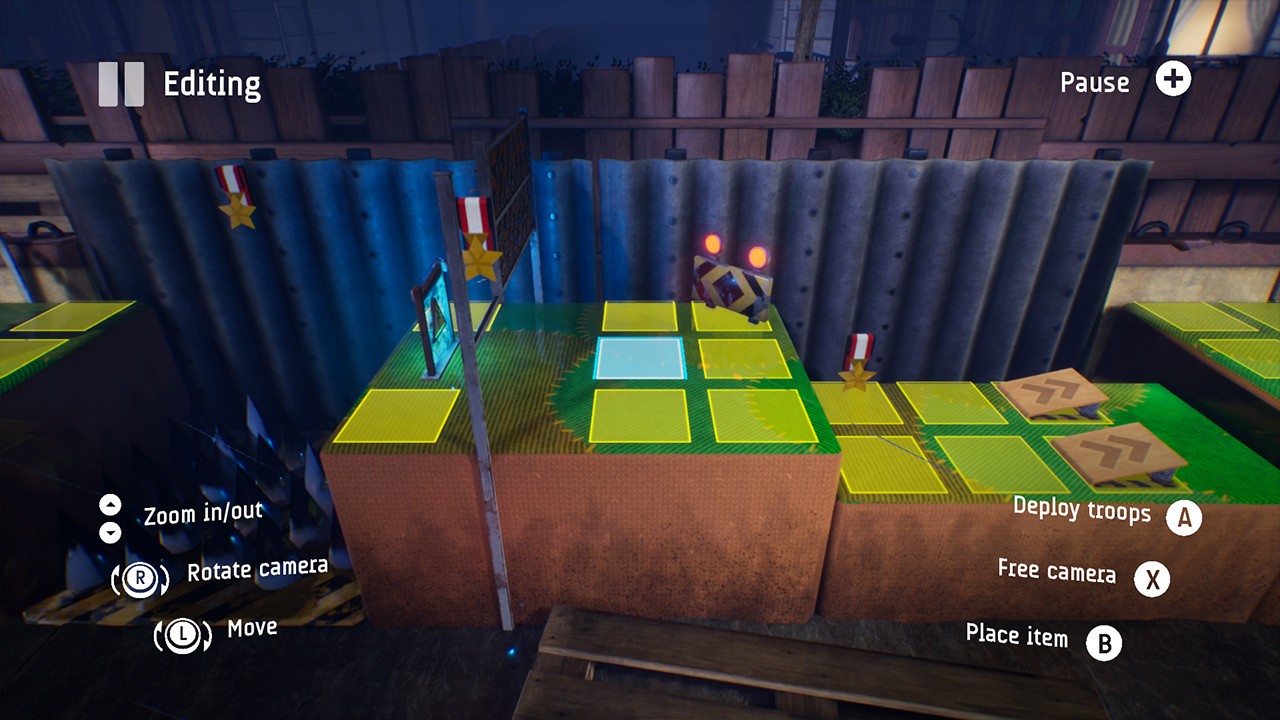 Flying Soldiers has an interesting 3D art-style which has a delightful mix of cartoonish realism, which makes the stages feel alive while retaining a classic charm of an indie game. The birds have differing designs, although these designs are relatively plain and could use more of the imagination that has gone into planning the rest of the game. The backgrounds of each stage change and vary in their themes and concepts, and the differing terrains give the stages some difference and make the world of the game feel a lot bigger. Overall, the visual design of the game feels rather uninspired. For such a great concept, the appearance of the game is rather bland and lacking in variation across stages. I longed to see some great change that would make the design anything but average, but the game did not deliver on this hope. The music is similarly lacklustre and seems to just imitate most military style generic soundtracks – not reflecting or playing on the potential humour of the game’s content in the slightest.

In the game’s menu, you can watch introductions to each campaign. These little videos were unfortunately the best designed part of Flying Soldiers. They had the charm that was suggested in the trailer for the title. I was hoping for a bit more in the menu in the way of post-game extras or an increased difficulty mode as I think this could have elevated the game and in tandem it’s overall quality. 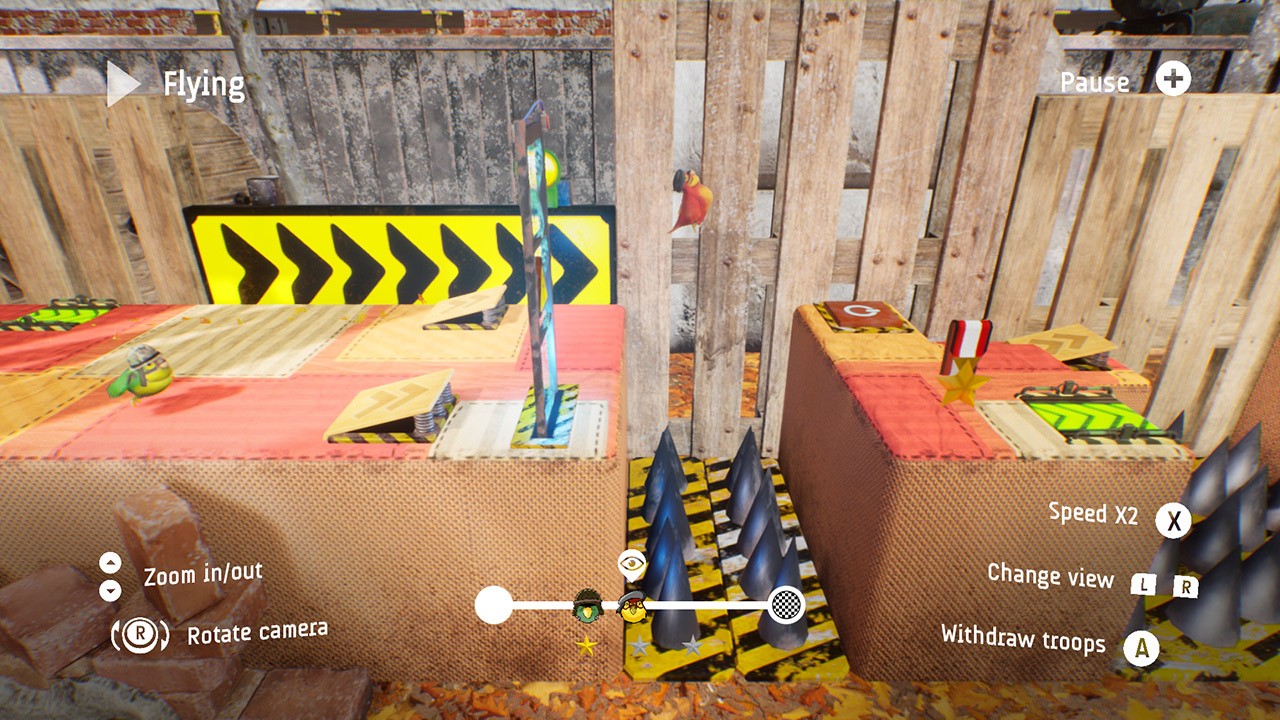 Controlling this strategy game is a bit clunky. Flying Soldiers utilise a grid-based set up to plan the route that your birds will be able to take. I accidentally placed things incorrectly, placing the wrong tools in the wrong places and misjudging the distance my birds would travel. This really came down to how the stages were set up. The child-friendly nature of the game with its large squares and awkward tool selecting comes to hinder the experience of the player. I fought and struggled with the controls more than any other difficulty within the game. If I could sum up trying to play Flying Soldiers, I would probably suggest ‘frustrating’. When I first heard about this title, I was excited to try it out. This game had an amazing premise, but seems to have let itself down in executing this premise. This may be someone’s cup of tea, but it’s certainly not a title I’ll be going back to.

This strategy game is a bird-based disappointment. There are other games which deliver the excitement of this genre better.