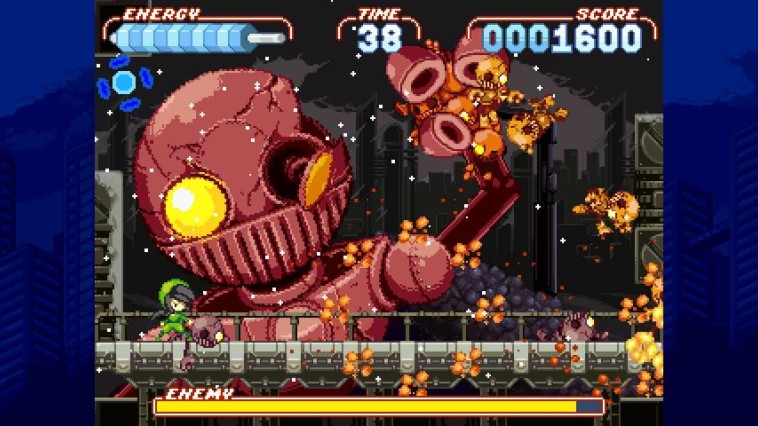 Noitu Love: Devolution is a unique action platform game that has been floating around on PC for a few years now under the title of ‘Noitu Love 2’. Visibly inspired by the 16 bit era, it’s a quirky and explosive game that combines traditional side scrolling platform fun with arcade light gun mechanics.

Set in the year 2288, you take the role of a young woman named Xoda Rap (Paradox spelled backwards) who is a member of a group known as the Peacekeeping League. Everything is all well and good in your city until there is a sudden hostile robot invasion, lead by a dictator named Darnacus Damnation. The plot may be a bit mundane but it certainly gets the job done. Note that there are a couple of addition playable characters that each have a slightly different move sets and alternative skills.

Your mission is split up into seven lavishly designed stages. These mainly consist of platforming stages although there are a few set pieces and changes in-game play style such as flying and forced scrolling mission.

Xoda runs through levels attacking enemies in a swiping fashion as she makes her way up to each of the bosses. One thing I discovered is that enemies usually spawn infinitely so it doesn’t always pay off to stand your ground and fight. Instead by running and avoiding confrontation where possible you will usually progress further and quicker. There are occasions where you’ll be locked in an area and need to beat a set number of enemies to progress, but outside of this it’s normally best to stay on the move.

The main gimmick with Noitu Love lies in the controls. You can move your character around using the D-pad, jump with the L button and all of the other abilities are controlled via the touch screen. To attack an enemy, instead of having to approach them and press a button you simply touch on their location and Xoda will dash over to attack them. Special moves such as offensive dashes, dives and spin attacks can all be performed by either swiping on the touch pad or double tapping on the D pad. 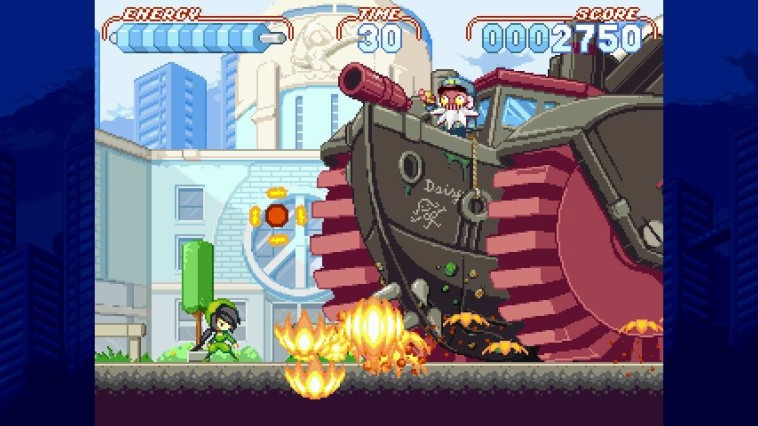 It seems as if the Noitu Love series was designed with keyboard and mouse controls in mind. By merging platforming and arcade shooting this title makes for some stunning fast paced gameplay, unfortunately I did feel as if this broke the aspect of challenge.

There were two main problems I had with the touch screen control aspect. Firstly it made a lot of the combat sections far easier than they would be in a traditional platformer. Rather than having to position you character precisely in order to perform an effective attack and still stay out of harms way, you simply tap on the enemy. This can be done quickly, many times over and as a result makes Xoda a little too overpowered.

The second gripe I have is that performing quick basic attacks is so efficient that it makes a lot of the special moves feel a little redundant. I think it would have been nice if the special moves were implemented a little more effectively to encourage the player to go to the effort of performing combos. Instead the constant enemy taps can get a little repetitive after a short time.

Having said that, one area where this control scheme excelled was during the flying stage. This mid game stage drastically changes the format by giving the protagonist a laser gun rather than a swipe attack. The best feature of this weapon was the ability to perform chain attacks by drawing a line of fire on the touch screen. By performing chain shots it is possible to navigate projectiles around obstacles and makes for some light puzzle solving. I think this was my favourite part of the game and implemented the use of the touch pad a bit more effectively than the bulk of the other stages. 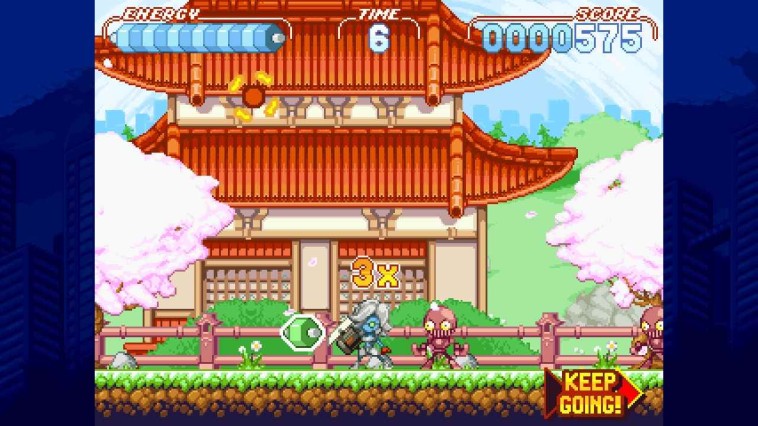 Despite a few minor nitpicks, I still think this game is worth buying. Graphically it’s clearly aiming to be something akin to the more advanced 16 bits games that were released at the tail end of the Mega Drive / SNES life cycle. I sensed a bit of Dynamite Heady, Gunstar Heros & Rocket Knight in this game’s presentation with larger than life bosses, vibrant pixel art, multiple scrolling layers and cross layer interactions.

The quality of the music also matched that of the visuals. The music was exciting and well composed with traditional retro chip tune motifs and some adrenalin pumping percussion. It was a little reminiscent of Mega Man although that may be giving it a bit too much credit.

I would describe the overall difficulty somewhere between easy and moderate. There was certainly the potential for a challenging game here, however the overall length combined with generously frequent check point should ensure that you do not get too stuck. Luckily there are multiple difficulty settings and some extra characters to play as which should provide some replay value.

I did encounter one strange bug when I started the second or third level, as for some reason I spawned underneath the stage and got stuck there. This was the only technical hitch I experienced and it was nothing a quick quit to the main menu didn’t fix.

Overall I do think ‘Noitu Love: Devolution’ is worth giving a try. Even if the unique control scheme is a bit of a novelty, it’s still worth the experience and there is some genuine fun to be had here.