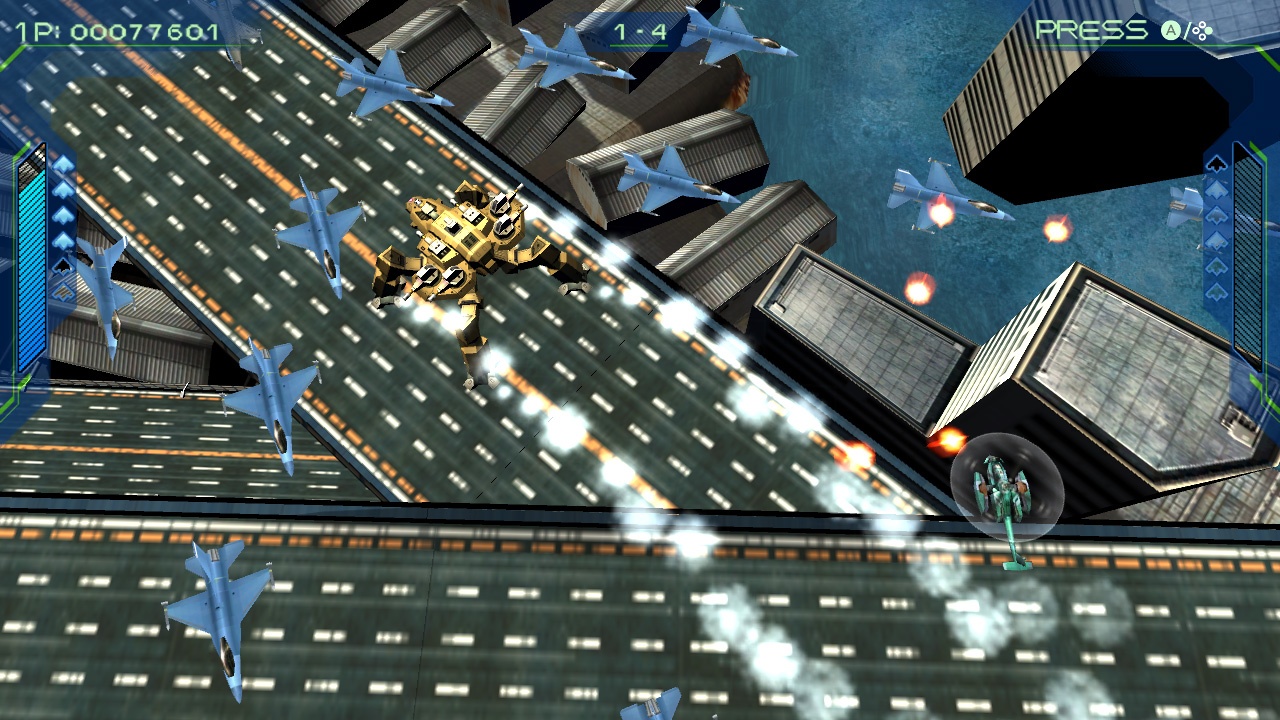 Believe it or not, but once upon a time, the only way we could get our gaming fix was by taking a trip to the local amusement arcade. There was always a thrill in constantly feeding coins into your favourite game and attracting the crowds, as they gathered around your cabinet, in your quest for gaming glory with the new highest score; that was until you ran out of money and had to wait for the following week when you could next return. These days, with the popularity of home gaming, there still remains a niche in the market for the retro arcade style and, although you do lose the original concept of playing within the amusement arcade setting, still offers the casual or retro gamer a great deal of fun.

If you’re a fan of the retro shoot-em-up, or shmup, and more particularly, those developed by Japanese developers Psikyo, then you’re in for a treat, as publishers Zerodiv have released Zero Gunner 2 on the Nintendo Switch. This old school classic, originally released in 2001 and later ported to the Sega Dreamcast, sees you taking control of one of three helicopters; the Apache, Comanche or Hokum. With the versatility of these flying machines, you have the freedom of a three hundred and sixty degree rotation with a firing arc that allows you to fire in all directions; something that was relatively rare when first released as most arcade shooters of the time were limited to a static firing in just one direction. With Zero Gunner 2, you’re going to need this extra element of gameplay as your enemies fill the screen from all directions. 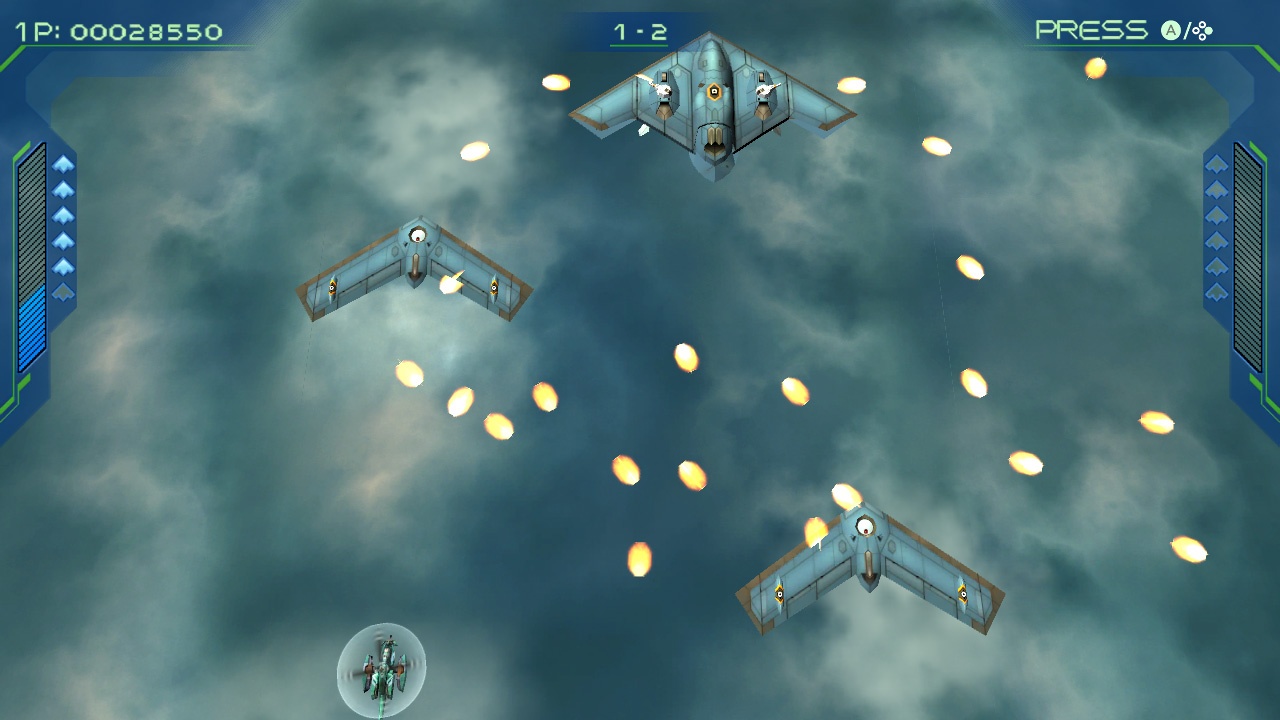 Each of the helicopters at your disposal handle differently from each other and contain varying loadouts within their armaments. This offers a variation in gameplay as you find which craft best suits your style of play, as well as offering new challenges; something else that not many arcade style games offer. As well as the handling properties, the control scheme here also offers the player a unique challenge. Using the left thumb stick, you fly your chopper around the screen in a direction which keeps your firing arc statically forward. However, pressing either the Y or A buttons brings up a rotational dial which, again using the left thumb stick, adjusts your angle of attack. It all sounds and feels a bit confusing at first and does take a little time to get your head around. It’s easy for your initial reaction to ask why on earth the developers didn’t make use of the twin stick setup, however, once you become accustomed to the controls you’ll find an appreciation in them as they allow a greater emphasis of avoiding enemy fire and sustaining an accuracy within your range of shooting and movement. This challenge becomes an important element of the gameplay as you constantly change positions in order to gain vantage points and keep your fire focused on the enemy as they continually infiltrate your airspace from all directions.

To help you combat this relentless onslaught of enemy craft, each helicopter comes with enough firepower to keep the enemy attacks at bay. These offer a range in variety, depending on your chopper of choice, from machine guns to rockets, lasers and even drones. Power ups are gratuitously dropped from downed enemy craft; the ‘P’ varieties offering increased firepower whilst firing with the B button and the ‘E’ elements provide you with a special weapon that is mapped to the Y button. You even have the ability to damage or destroy some of the smaller craft with the rotor blades of your helicopter should they dare to stray too close to you.

Covering seven levels in total, Zero Gunner 2 will have you flying over various landscapes that range from cities, railroads, oil rigs and inside enemy bases. These levels play out in a random order with each play through offering a fresh variety to its replayability. A complete overhaul of its graphics presents you with a clean, crisp 2.5/3D viewpoint that, despite its origins being turn of the century, look extremely pleasing to the eye; there is even an option to turn on a filter which gives the game a more retro look. Each of levels play through a generic set up that sees you clearing the skies from wave after wave of enemy craft, culminating in a boss battle that takes place over two stages. Enemy submarines, bombers and gun emplacements try to smash you until their initial armaments are destroyed. These craft then transform into some impressive looking mechs for the second stage of these battles. 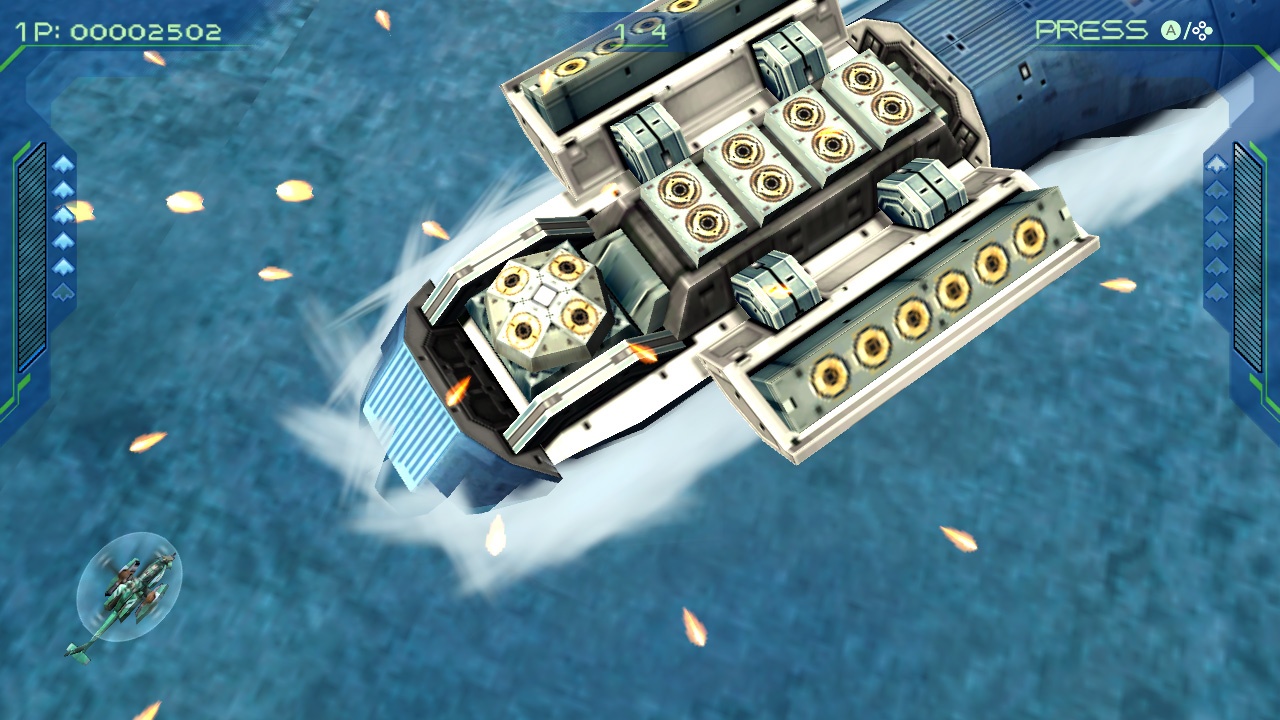 With its limited number of levels, you can easily play through the game from start to end in roughly twenty to thirty minutes. Despite its shortness of length, Zero Gunner 2 does offer a rather stern challenge, even on its default ‘normal’ difficulty setting. The options menu also offers varying degrees of difficulty, depending on how easy or hard you find these challenges, as well as giving you the freedom to personalise your gameplay with the amount of lives and retries you wish to afford yourself. This can add further variety to its replay and longevity values, as well as the inclusion of a two player mode. Taking a joy-con each, you and a friend can work together to combat the forces of evil which can make for some hectic on-screen action. As well as all of these various additions to further boost the length of the game, you also have the addition of a high score table so you can go back and try to beat those personal bests.

As far as being an example of a retro arcade shoot-em-up, Zero Gunner 2 is easily one of the best examples of its genre available today; especially with its unique abilities and various offerings to its playability and replayability. Despite not being able to feed in coins or attract crowds as you play, this game has not lost any of its appeal at all. Then again, with its hybrid capabilities, you could always take your switch to the amusement arcade where you could stay in retro heaven for as long as you wanted.