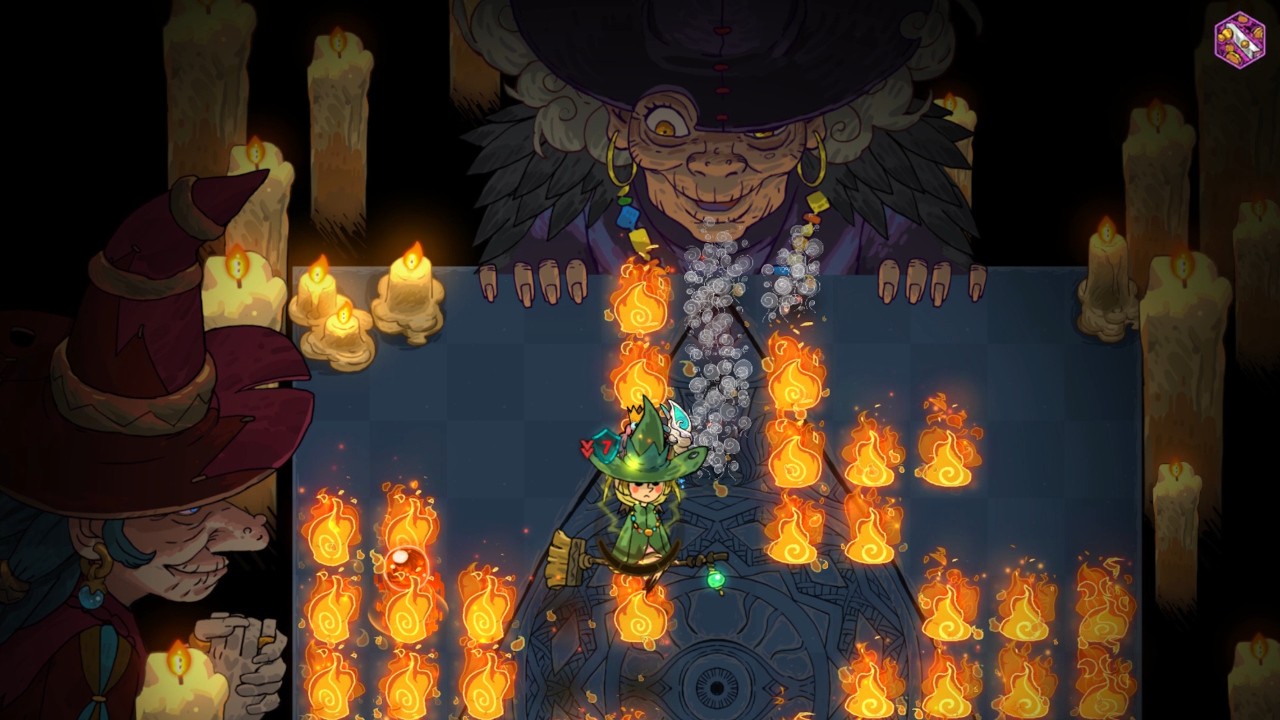 It’s always interesting to see new takes on brand new fields that are really being explored. Take, for example, Crypt of the Necrodancer. It wasn’t the first roguelite dungeon crawler, not by a longshot, and not the first “mystery dungeon” style game to really hook audiences. Instead, it was the first to really make a name for itself by carving out the musical element and making it not only the cornerstone of the play method, but also what kept people coming back again and again in spite of there being no inherent change to the core gameplay. It’s probably why Brace Yourself Games was tapped to make the fantastic Cadence of Hyrule and why people were sort of so-so on Pokemon Mystery Dungeon DX when it launched on the Switch. The mystery dungeon genre is an interesting one to really delve into, so it’s satisfying that NEXT Studios, in partnership with Team17, have crafted a new mystery dungeon approach that’s procedurally generated, multifaceted, and looks just so damn good.

Crown Trick is the story of Elle, a young girl who has inexplicably found herself trapped between sleep and waking in the Nightmare Realm. She soon encounters a snarky, omniscient being that is simply called The Crown, which explains that the Nightmares are seeking to take over the world completely, and it is the fault of a human, not a nightmare, that this is coming to pass. As Elle has unceremoniously been chosen to be the fated champion, she must now delve into the Nightmare Realm and find the source of the discourse, hopefully defeating it and rescuing the living as we know them. Unfortunately, the way ahead is ever changing and amorphous: like a truly bad dream, you can’t remember all the details upon waking, only that you sincerely didn’t like it. Thankfully, Elle can reawaken in the Hall of Reincarnation, properly outfitting herself and even calling upon the aid of other trapped souls to assist her. Who knows? Elle might even be able to defeat some of the more cantankerous denizens and have them gift her their powers so that we might all be able to rest peacefully once again. 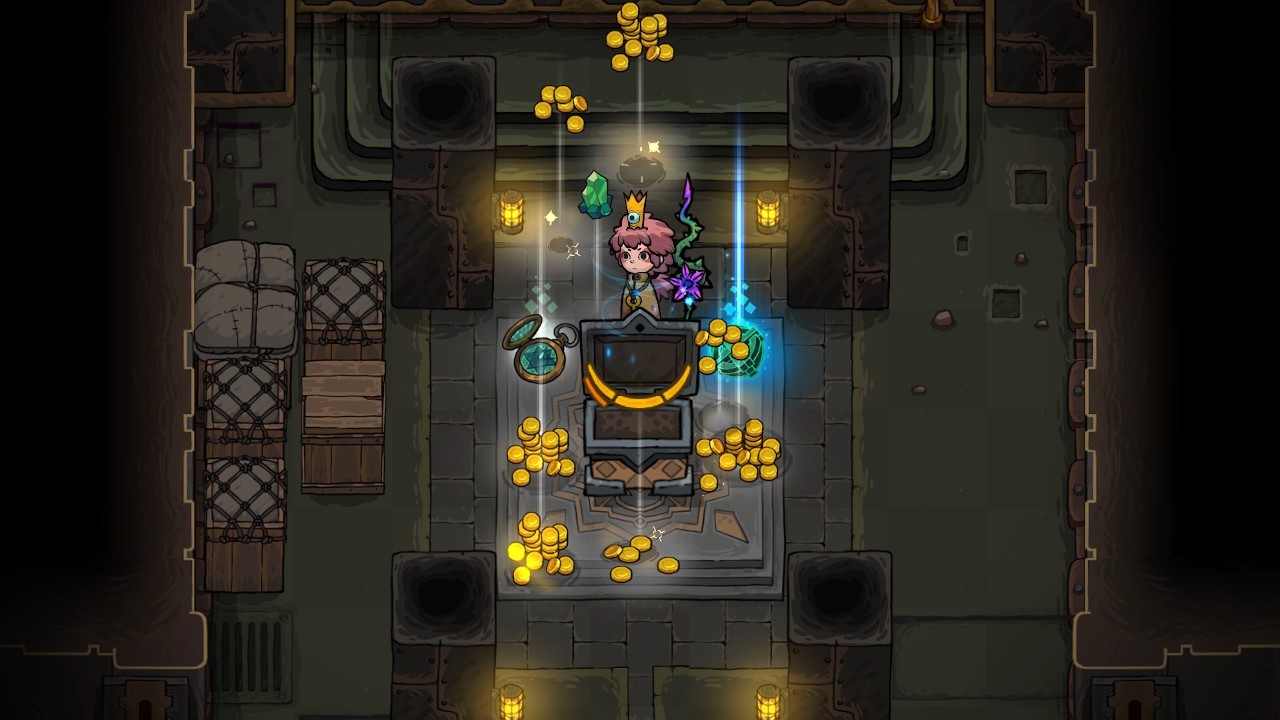 Crown Trick, as mentioned before, is a mystery dungeon style roguelite where Elle moves about in one of four directions to explore the Nightmare Realm, entering into rooms that could be full of treasure, enemies, traps, assistant power-ups or a combination of the three. One of the reasons that I mentioned Necrodancer up top is that NEXT Studios specifically mentions “enemies move when you move” in their description, which is bizarre, and I feel like they needed to grab the Necrodancing crowd’s attention with this concept. The thing is, that’s how all mystery dungeon games I’ve ever played work, so it’s kind of a strange thing to claim. It’d be like a Mario game claiming “you can crush enemies by jumping on them!” Yea, Nintendo, that’s how it’s supposed to work. Anyways, with Crown Trick, your death will reset the layout of the dungeon floor, and you need to clear a certain number of bosses before you move onto the next official world, which you can teleport to in the future from the Hall of Reincarnation, so don’t be worried that you’ll need to do the full game in a single life.

Crown Trick does three things incredibly well, with the first being the visual presentation. From the drop, it’s very evident that a lot of care went into both the character design and the animation of this game. Elle stands out as a very specific protagonist, and all the enemies that she encounters from minor penguin-type goons to angry robots, silent gunmen, and the imposing Familiars all look and feel fantastic. I noticed there was a bit of a loading wait when it came to generating the different floors, but the wait is worth it in the payout. There’s no issue with the response of the game in terms of movement, animation, swinging and shooting styles or most interactions. Players may notice that you need to confirm some things more than once (particularly when it comes to items on the ground) for the game to fully recognize what you’re requesting, but it’s a very minor complaint.

The second thing that Crown Trick succeeds at is the sheer amount of variety in terms of loot, equipment and playthrough ideas. There is a metric ton of items and ideas to think about from the very beginning, and it only expands exponentially the more you play. There are weapons that have wide and crazy attack tracks, from vertical three panel swipes to horizontal four panel stabs, with all sorts of complications for elemental and status-affecting damage mixed in. You can constantly find more blueprints in different treasure chests to unlock more weapons available at the stores between levels, and enemies also have a reasonably high drop rate for gear. You’ll find that you gravitate towards certain weapons, and that they mix well with different artefacts (passive equipment that adds more buffs) and potions (dispensable magics that you can both find and concoct). As you rescue more people to join the Hall of Reincarnation and allow yourself to improve your runs, the weaponry gets even greater. Once I unlocked guns, the game took on a bold new approach, because shooting an enemy in the face from five panels away gave me an advantage that was unprecedented. 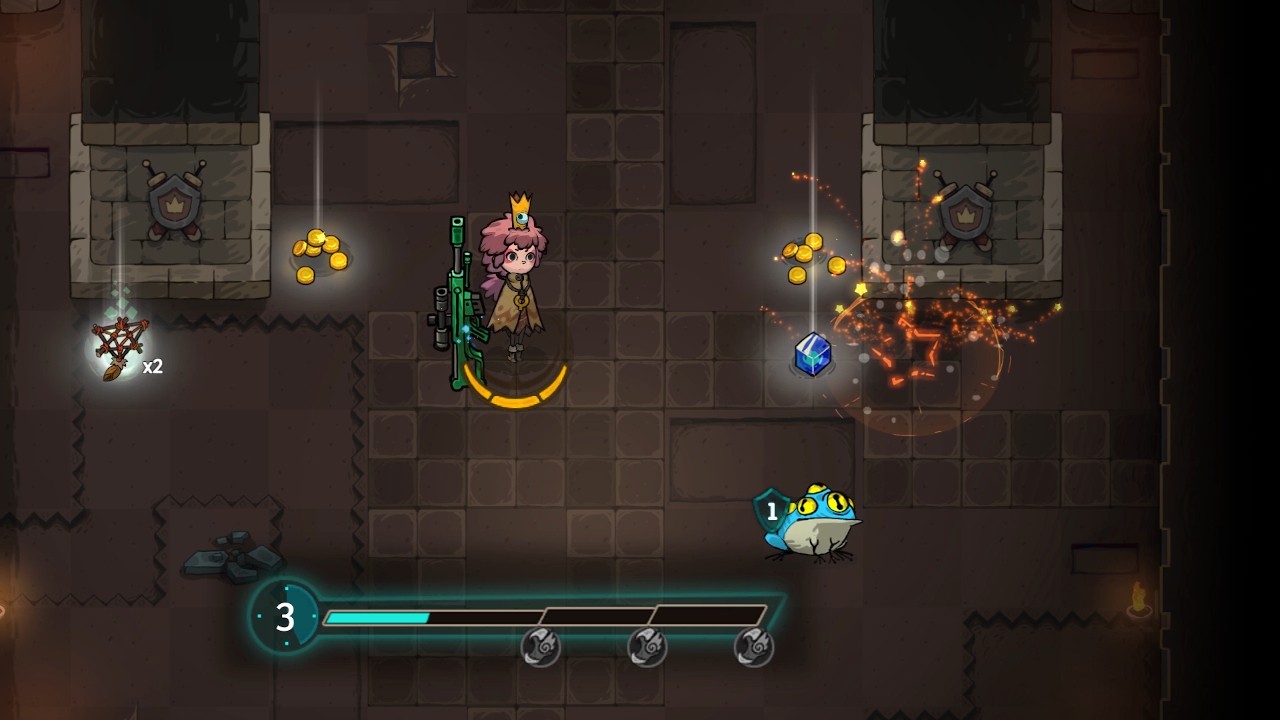 Third, the combat approach, and this is a big one, as it’s the bread and butter of the game. Crown Trick really wanted to stand apart, so there are so many levels to unwrap here. The biggest point is the existence of Blinking, which is the limited ability to teleport to a certain point on the map without using up a turn. Given that everything is turn based, Blinking is not only a strategic gold mine, it’s also the only way to survive certain boss attacks when you have no chance of escaping the blast radius. You need to really work out the how and when of Blinking, though: you have a limited number of charges per battle, and recharging sometimes requires you to finish combat before your Blink Boots can go again. You combine that with the Familiars, which are skill granting monsters that can be defeated and then added to your party in pairs of two. Players can decide, after a fashion, whether they want two familiars that compliment each other (two lava-type sets of skills) or are contrasting (maybe an electrical with a water?) to best utilize their potential. Skills use magic points, which are also limited, so choose wisely. You can only “remember” three Familiars at a time, so do your best to hold onto the ones you really enjoy. Additionally, being able to “break” the enemy through either successive attacks or just well timed elemental strikes can render them stunned and more susceptible to damage, so there’s a place for your inner barbarian amidst all the other careful, magical combat.

When you mix all the aforementioned stuff together, what you get is Crown Trick’s special and addictive blend of gameplay mixed with both strategy and luck. You can add to your run by investing both gold at the stores and special Soul Shards to improve other aspects (more weapon choices on spawn, more potion potency, etc.) but what comes next is entirely up to you. You might be super lucky, find a few Dream Keys, get some stat-buffing scrolls and steamroll through enemies until you get to smack around the boss with some really well placed skills (though which bosses you fight will even be randomized). You might be terribly unlucky, get stuck with some weapons you’re not as happy with and then need to pray for a decent drop while actively blinking away from charging enemies, sniper bullets, exploding mass radius attacks and remembering that the loading screen told you “Lava floor panels deal lava damage” (which is one of my favorite things I’ve read in a load screen). In any case, like all great roguelites, you accept your death will come at some point, and only great patience will be your saviour. You need not move forward at breakneck speed unless you want to. The best plan, often, is to move into the room, assess the situation and then move forward with such deliberation and determination people might think you’re trying to Apperate. Good strategists survive the fight with plenty of HP in reserve for the next round. Bad ones might win through sheer flailing and successful “breaks”, and then have one HP left to move into the next round and, oh look, no more potions.

Crown Trick isn’t the best damn game ever, but it’s one of the better mystery dungeon titles that I’ve played in a long time. It was more satisfying than certain ones I’ve encountered, and I would put the addiction on part with Necrodancer or even Izuna the Unemployed Ninja. There are a ton more blueprints for me to discover, not to mention I’m still hoping to find a Familiar with a better name than Swashclucker (though I highly doubt it). It’s punishing but rewarding, long form yet fast to play, and positively a treat for the eyes and for the war general’s mind. Plus, we get to save people from bad dreams, and there are few endeavours more noble than that.

A freaking massive dungeon crawler that combines tons of equipment and skills with the art and animation stylings of a delightful surrealist movie.