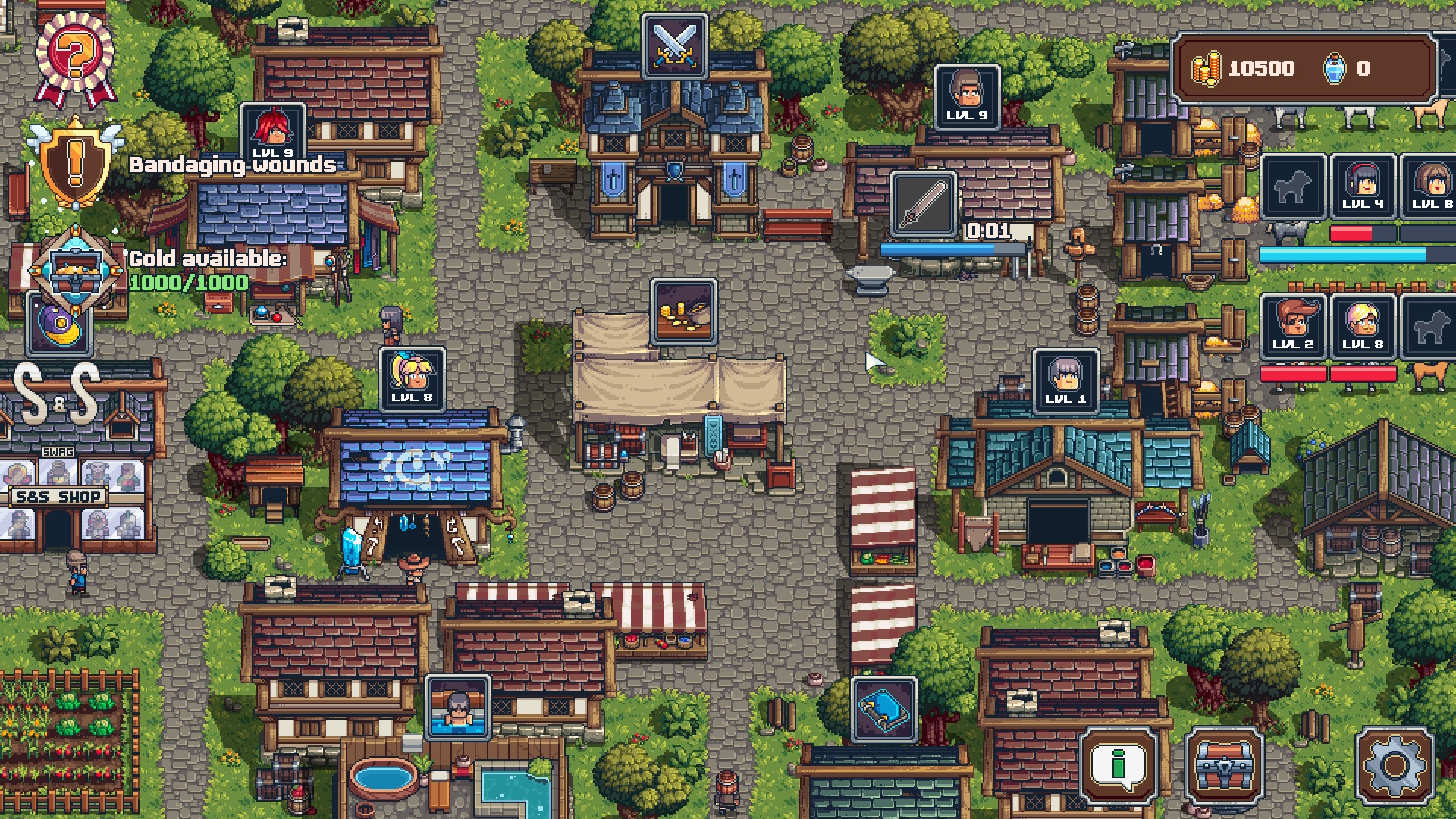 What could possibly get me to put down the Switch and do a PC review for the first time in months? Why, it’s another release from TinyBuild! After missing the boat with both Graveyard Keeper and Pandemic Express, I was able to secure a copy of the newest simulation, Swag and Sorcery, which comes to us from Lazy Bear Games and Uroboros Games. Lazy Bear, you may remember, already brought us Punch Club to the Switch, so we’ve seen a good investment of time in their simulation skills. Swag and Sorcery is quite a bit different than Punch Club, though, if you’re in the market for a good looking idle game, this might be right up your alley.

Swag and Sorcery takes place in a kingdom far, far away, where the people are falling into despair, the royal advisor plots an usurpation, and the king really, really wants his great-great-grandfather’s fresh suit back. The king has this idea that getting the suit back will grant him magical properties and rebalance peace and happiness in the kingdom, which no-one thinks is true but that’s the joy of being king. So you, dear omniscient player, must find brave and somewhat expendable heroes to set out and find the missing suit, one dead body at a time. No, it’s not always the bad guys: it’s often you, but that’s okay, there’s always healing and more corpsed heroes to hire and carve deeper and deeper into the monster filled underbelly of the world. 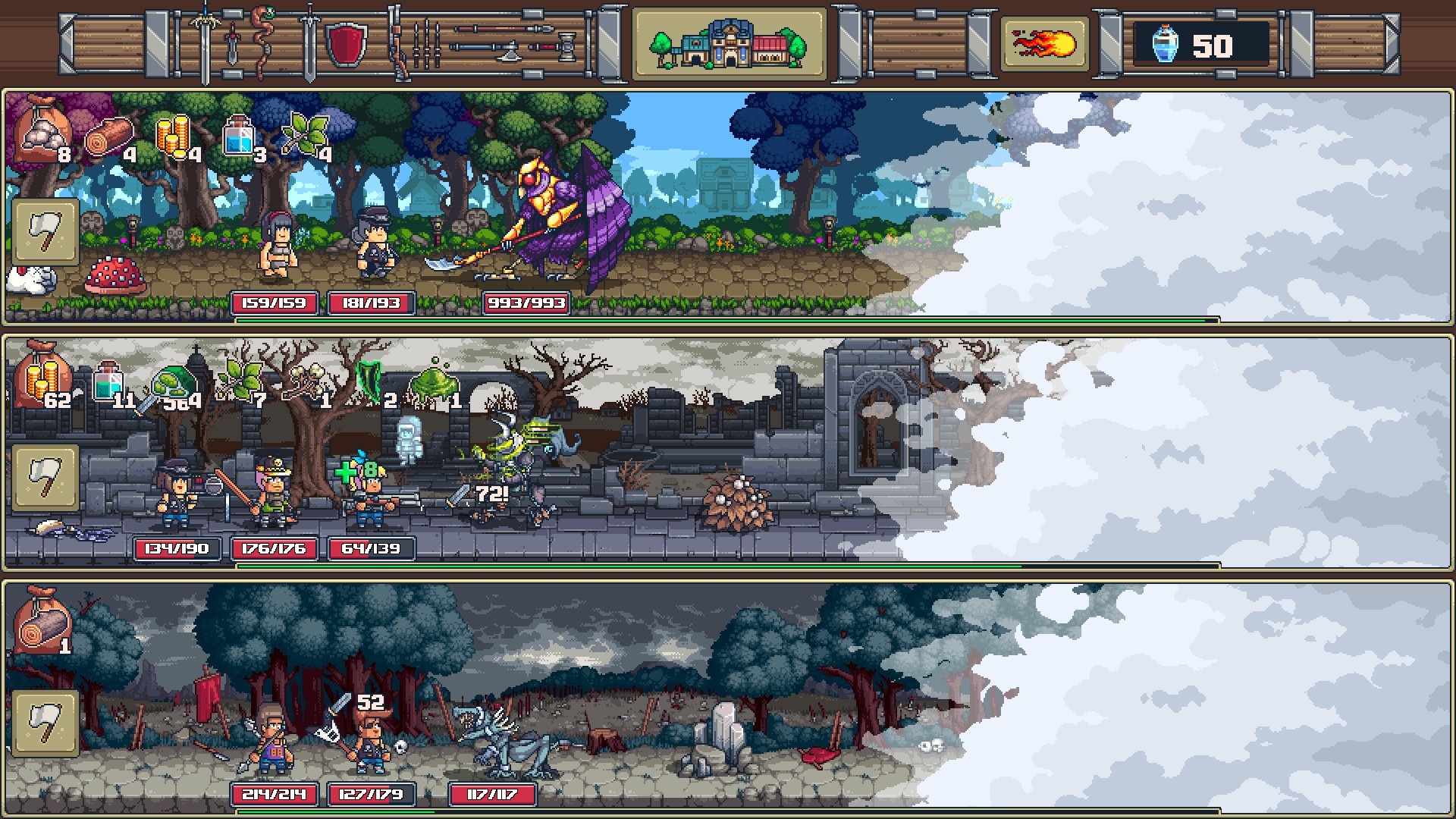 Players coming into Swag and Sorcery should know what they’re in for in terms of gameplay before anything else. First and foremost, yes, this is a simulation game, but it’s specifically a grind simulation game. There’s a lot of stuff to be found and to be utilized in the game, but every single item takes time. For example, you’ll need to go on quests to find different items, and that, in turn, will lead to additional quests that slowly but surely open up. One of the first quests you get asks you to simply retrieve five copper ores from the nearby woods, and then bring them back to the blacksmith. Once you dispatch a hero to the woods, however, you have no control over what happens next. Sometimes you’ll find several ores, trees, berry bushes or whatever immediately, and that’s what you need, boom, all done. Other times, you’ll encounter several waves of monsters, and you just gotta deal with them with whatever equipment you happen to be wearing. You can control when your characters decide to flee from their adventuring (and fleeing is preferable to dying, since you’ll keep whatever loot you’ve already found) and, after you unlock them, you can cast some spells, but the attacking itself is automatic. Once the adventuring is complete, you can replay and go again to try and amass extra loot or stop and return to the village.

Once in the village of Swag and Sorcery, there is a ton to do that incrementally gets rolled out and improved. There’s equipment to smith and stitch, but only after you refine the materials that you get from, yes, adventuring. Leveling up characters through the training ground greatly improves their stats and is a more definitive way to survive adventuring than just making equipment. There are potions to craft, old equipment to be sold on the market, healing in the church, improving happiness in the spa, and, most unique of all, participating in fashion shows at the fashion house. These fashion shows tie most directly into the “Swag” portion of the game, asking the player to mix and match the hottest looks in order to win reputation and gold, thus spreading your name and improving your access to better looking (and thus better functioning) accessories and equipment. Each of the buildings can, over time, be upgraded, but it certainly takes a ton of gold, materials and, as a result, time.

For people who enjoy the hurry up and wait sort of gameplay that Swag and Sorcery provides, there’s a lot to enjoy throughout. Firstly, it is a very good looking game that performs admirably. With an install size of under 800MB, TinyBuild and company have done a fantastic job of streamlining the title to be far more stable and responsive than some other titles that have been released in the past. Swag and Sorcery uses a good amount of “juicy” pixel design, aptly called so because of the hyper saturation in color and design. Every single character, from the heroes that you hire to the elegant greaves you buy from the fashion house to the elite ghouls you fight in the swamp has a gorgeous touch upon their sprites and angles. The animations of sword swinging, arrow slinging, spell casting, and even the slight poses during a fashion show all look fantastic. For a game at this price to honestly look so good, it’s a bit shocking, and I think it goes to show what the creators think of in terms of investment. 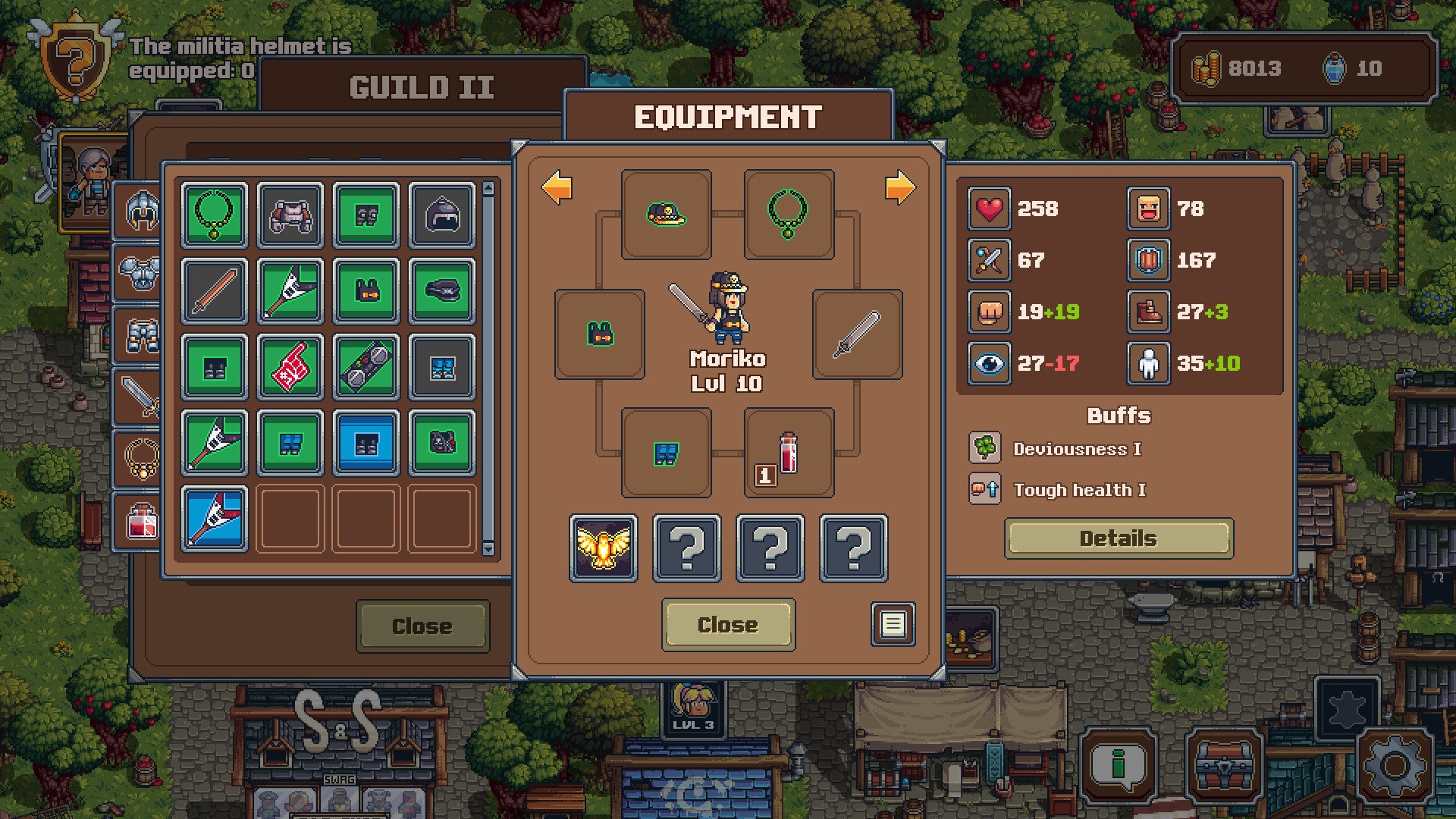 There is a lot of game to unpack in Swag and Sorcery, which is both a blessing and a curse due to the way it’s laid out. There is a certain difficulty spike that occurs a couple of hours in that sets the tone for the rest of the game, and you just need to decide if it’s something you want to live with or walk away. Basically, the common enemies that spawn become exceptionally difficult (with the elite enemies being downright impossible) and you need to grind and adjust as such in order to succeed. Even with two parties going at the same time on different adventures, you end up active idling a lot, where you can’t do anything except watch carefully and throw up the surrender flag as soon as things look like you’ve reached as much as you can loot for that run. Then return to the village, don’t waste money on healing (just wait until you’ve regained health) and then head back in. It’s got some of the trappings of those mobile phone games but without the ability to pay and speed things along, putting it both above pay to win experiences and below normal simulations like those we’d see from Kairosoft. When things are working out well, you get into a routine of adventure, craft, sell, buy, outfit, style, check missions (which are seemingly never ending) and get ready to repeat. Figure out which parties work best together, level up those who need it, get better equipment, decide on investing in tanks or ranged heroes, then do it all over again. I’m several hours into the game and there isn’t an ending in sight, and I’m unsure how far I want to go.

The overall tone of Swag and Sorcery is a positive one, from the game’s design and unabashed nature to the decent voice work during the plot expositions (though I do wish there were more of those) and a jaunty and enjoyable soundtrack to keep everyone in line. This isn’t as passive as some people might want it to be, and it’s not nearly active enough for the adventure or action crowd. It’s an idle game that asks you to pay attention when it needs you to, and ignore it otherwise. There’s no penalty for having the game sit quietly in the background as you do other tasks, so, as long as you can direct up to two minutes of constant attention at a time, you can slowly play this game over a number of hours. However, because Swag and Sorcery isn’t automated in a number of places, you’re still forced to make sure you’re giving it due course with your mouse and scrolling around the screen. Fun, in a certain direction, but not really concrete in either the active or passive world. Keep these facts in mind before you decide if you want to help the king get his swag back.

Swag and Sorcery is both simulation and idle clicker without enough invested in either side to really make it a breakout title, but it’s still a visual winner.