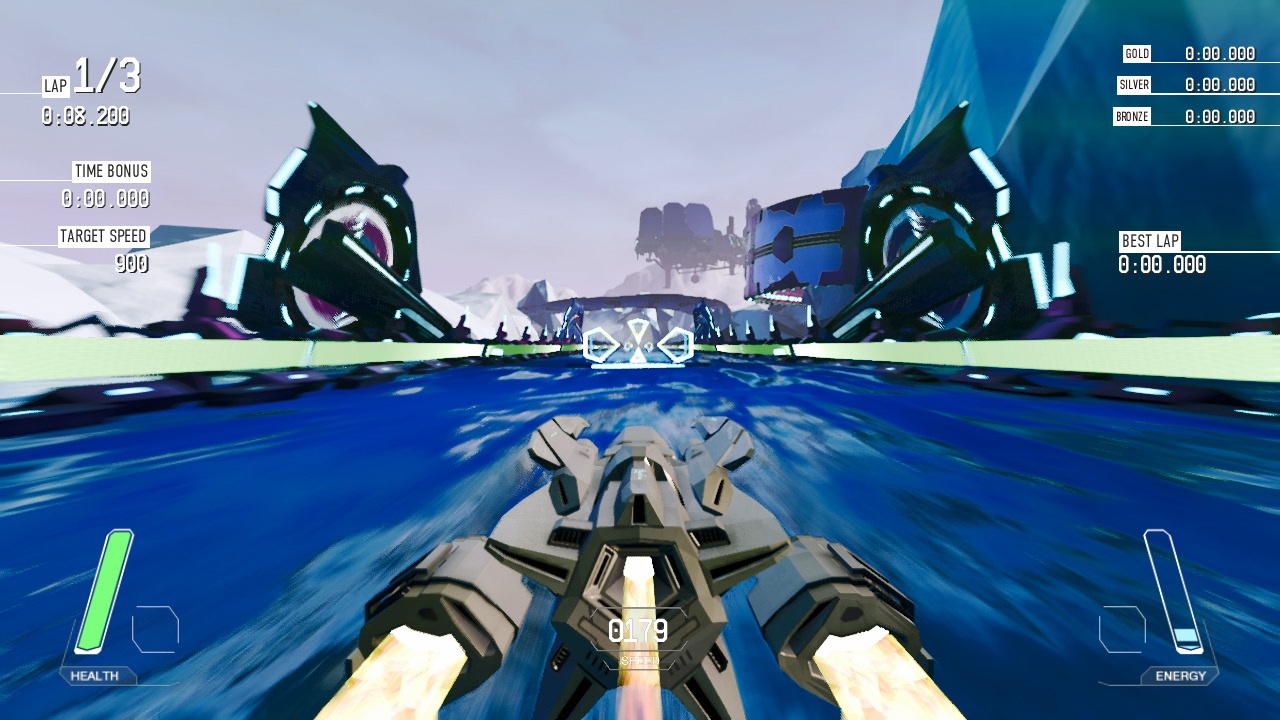 One of the most innovative games to come out of Sony and their Playstation One console, was undoubtedly Wipeout. It has since spawned numerous sequels and spin-offs, as well as spattering of other titles that have tried to replicate its formula. The latest of such titles, which has been in development for over two years, comes in the form of 34BIg Things and Nicalis’ Redout, as it hurtles a release onto the Nintendo Switch.

Much in the same vein as Sony’s game, Redout presents itself as an anti-gravity racing game with a series of futuristic ships and challenging tracks that slope and twist around a variety of locales. In terms of replicating the same, successful formula of the Wipeout series, this game does a pretty solid job of following within its footsteps, with a mass of content, variety of interesting track-layouts and ship designs, as well a few other features to bring a more unique model to the gameplay. From the offset, you can choose to play from a series of game modes such as career, quick race and local split-screen, as well as online, racing. However, it’s best to start off with a career game, as everything that you unlock here is carried over to all of the other game modes.

You begin by picking a model of craft with which to race with, as well as picking from some extensive customisation options in decal liveries and colours. Once your selection has been made, you immediately partake in your first event. There’s also a lot of variety here too, beginning with a time trial style race, you then move on to series of events that covers pure racing, power-up racing, elimination events, tiered racing and even boss races which take place over a series of tracks that are linked by portals in a Le Mans style endurance race. Once you find yourself on the track, at least in your first race, the game highlights several of its elements in a form of tutorial play. As with the majority of racers, speed is controlled with the ZL/ZR shoulder buttons, whilst the left thumb-stick controls your steering. 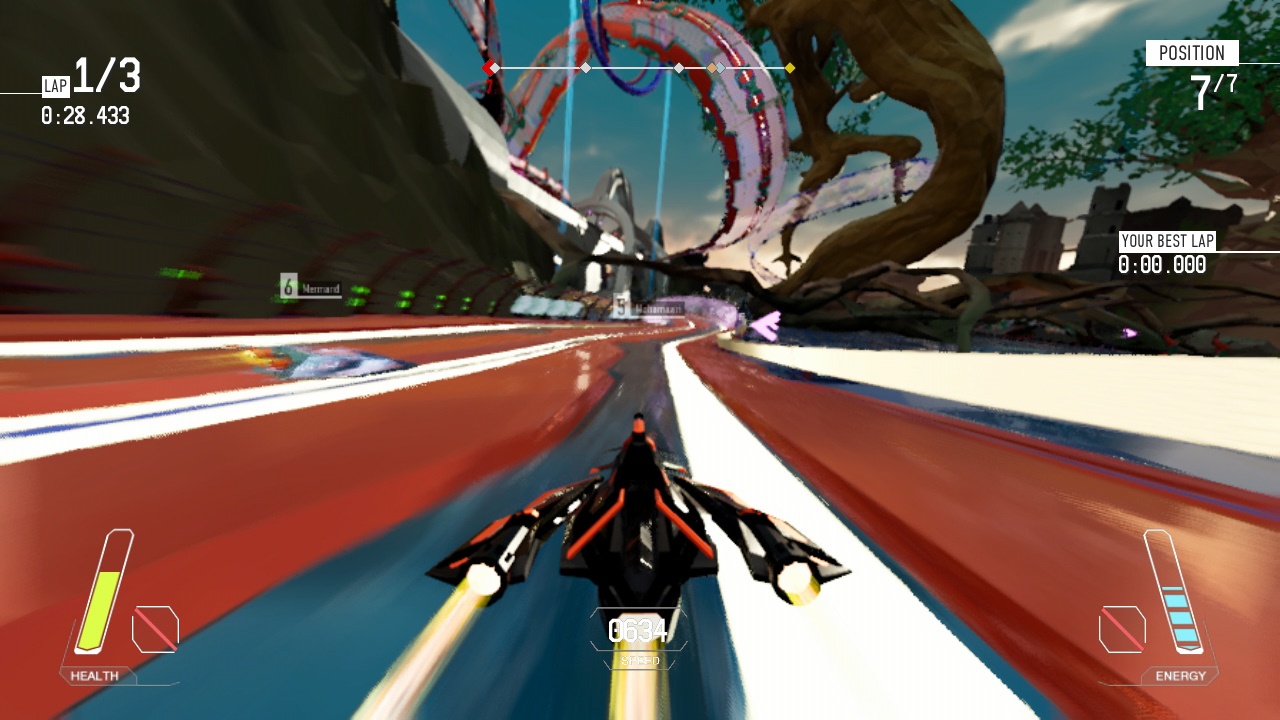 However, with Redout there are further elements that need to be taken into account to ensure a smooth ride. The first of these involves the use of the right analogue stick to fine-tune the steering mechanics. By directing left or right, you can strafe the course, or present a more controlled drift around the tightest of bends. However, as the game presents some of the most interesting track designs I have seen in a long time, you also have to account for your pitch too, lifting your nose as you ascend vertical ramps, or pitching forward on an incline to maintain your level of speed. It can take a few goes to get used to the layout of this control scheme, bur before you know it, it becomes a very intuitive and interesting way of maintaining control of your ship.

The second element comes in the form of your ship’s energy. As with other, similar games, your craft possesses an energy bar that slowly depletes as you make any forceful contact with the barriers that line the course. However, your ship also comes with a boost facility, implemented by the B button, which increases your speed for the duration of which you hold your button down for. The downside though, comes in the form of boosting also depletes your energy levels and once consumed, causes your craft to destruct; losing you valuable time or places within the races. To combat this though, each event you participate in awards you with XP levels and monetary awards, which can be used to purchase upgraded or different classes of craft, as well as bolt-ons that can offer a variety of buffs, including one that can drain another ships energy in order to keep yours topped up.

These mechanics all add to create an interesting level to the game, however, in order for a racer to be successful, especially one in the vein of Wipeout, it needs to utilise a good sense of speed and smoothness within its control scheme. Thankfully, on the Switch and despite running at 30fps, Redout does a good job of conveying a good sense of hurtling around the tracks and, in some way, does possess a smoothness in its control. When you add this to an impressive level of content, depth and options, Redout does come across as a very competent racer. However, that’s not to say that this isn’t a game that has had to make certain sacrifices to get it running on Nintendo’s console and unfortunately, it’s here where the game slams on its brakes to produce a few elements that are, to put it nicely, a bit disappointing. 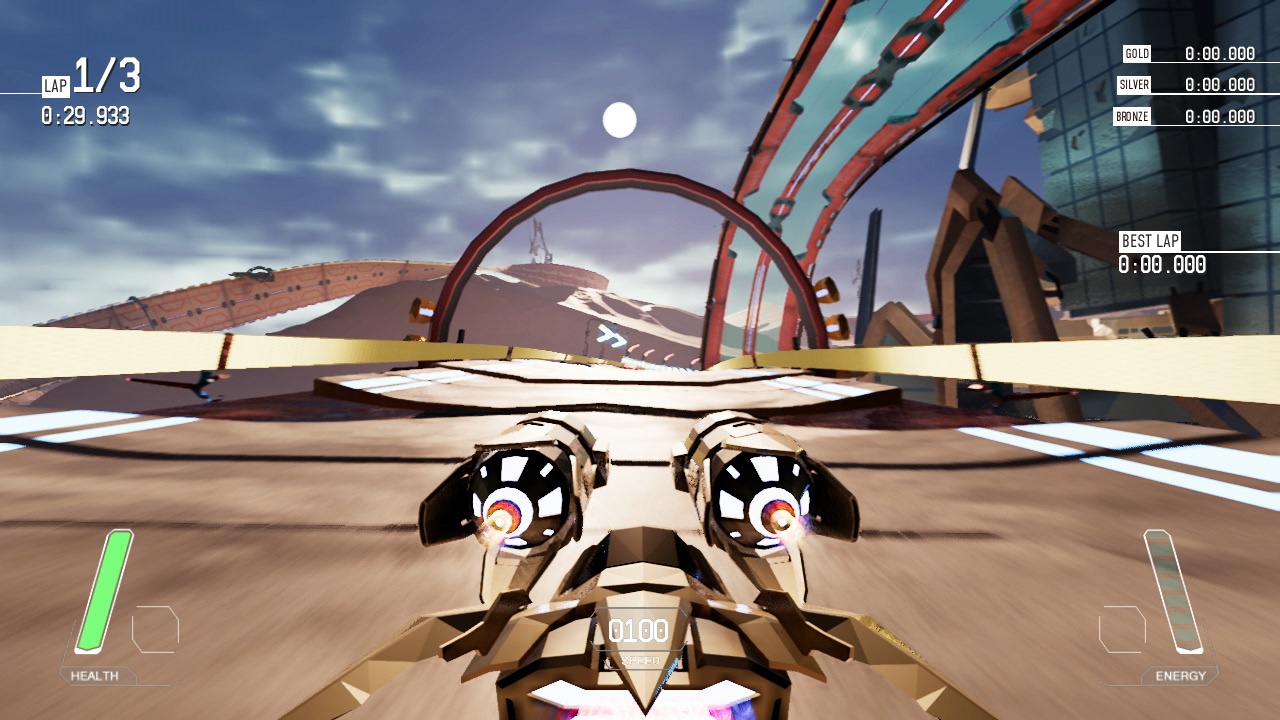 The first of these come in the game’s visuals. Despite containing some really interesting tracks that twist, turn and loop, there are segments throughout each one that look downright ugly with some very muddy textures. This can be off-set by some areas looking distinctly beautiful, but throughout each of the courses, a grainy resonance reverberates throughout. There were even instances where I felt like I was playing the game on my old Sega CD, which can’t be denied, had some of the worst graphical presentations in recent years. As well as its downgraded visuals, much of the scenery and trackside extras have been cut back from the other console versions of the game, producing a lacklustre backdrop to each of the races, as you hurtle through lifeless locations. It can be argued that you race at such speed, that this isn’t necessarily important and to some extent, I agree.

However, I also felt that the races themselves felt pretty lifeless and I never felt that I was taking part in anything particularly important, or exhilarating within the thrill of the race. This was largely due to a redundancy in the feel of racing against other competitors, as you simply flashed past them or they flashed past you. There was never any real jostling for position or manoeuvring to find the perfect race line to take advantage of your opposition and when you couple this with its devoid presentations, soon begins to nurture a feeling of dullness within its gameplay. I’m not saying that this is a particularly bad game, or even boring to play, it just simply doesn’t reach the same level of urgency as the game on which it is based upon. I also encountered problems with the game’s online capacity and have failed to find a single game or lobby on which to play. I’m not sure if this is due to a low player-base or the game itself, but every time I tried, I was presented with a message informing me that the servers were not responding. Hopefully, this will fixed soon in a future update if it is the game.

Overall, Redout is a very competent racer that does a lot of things right, However, due to the constraints of the Nintendo Switch, has also been forced to cut back on a few elements that produces some lacklustre moments. Saying that though, it does have a lot going for it and for me, these far outweigh its shortcomings. There’s plenty of options, depth and content and although three hours in, am still nowhere near the endgame. It also contains some nice extras, such as sponsor demands which require you to race within certain constraints; the completion of which earns you some nice monetary rewards, which adds to the layers of playability that this title possesses. Oh, and that soundtrack too, well it’s simply scrumptious. If you’re looking for a Wipeout game for your Switch, then Redout will deliver that experience and in more ways than one. However, if you’re looking for an exhilarating ride to invest you over the long term, there are better alternatives out there. To put it simply, it’s a good game, but unfortunately, just strays a little too far from being perfect.