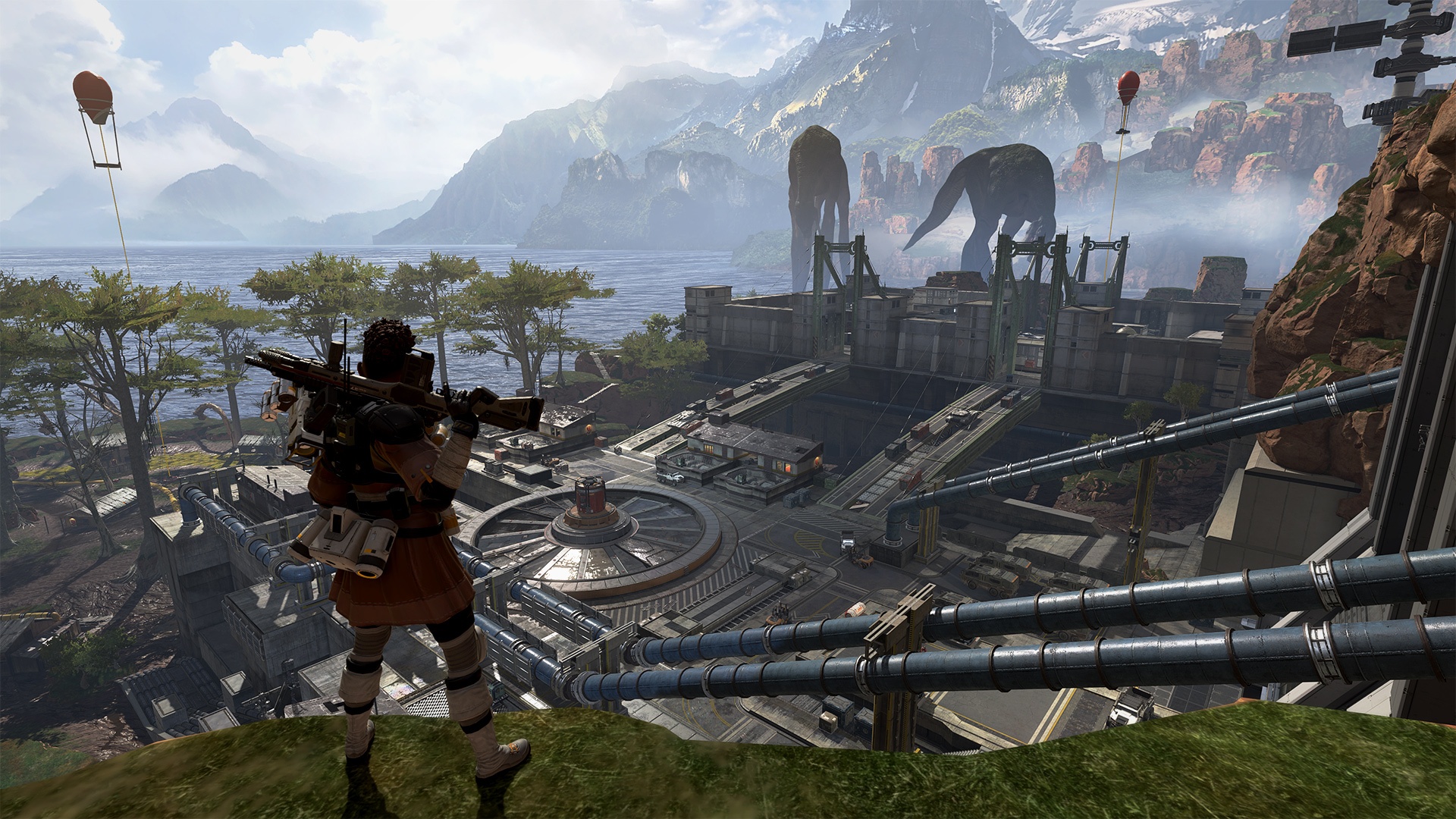 If you’re suffering from Battle Royale fatigue, I imagine eyes were rolled at the surprise dropping of Apex Legends. After all, this year we’ve seen the likes of Tetris drop it’s own spin on the genre (side-note, it’s surprisingly competent), so it seems no IP is safe from the last-man-standing type gameplay we’ve seen so much of lately. However, while Apex Legends doesn’t reinvent the wheel, its possibly the most refined example of the Battle Royale system, and despite being free-to-play, it’s far more polished than most full-cost alternatives.

If you’ve played the likes of Fortnite, Player Unknown: Battlegrounds or Call of Duty: Blackout, the premise is the same – drop onto the map, scramble for weapons and ammo and fight to survive until the end. As players drop and time elapses a deadly ring cuts off parts of the map forcing you to face enemies in tighter and tighter conditions. The map is expansive and offers plenty of variation across its bio, from confined airbases to murky swamps, offering sniper hotspots and plenty of ground for close range combat.

Your team drops empty-handed, leading to a mad dash for weapons, ammo and armour which are spread throughout the many buildings that litter the Kings Canyon map. Choosing where to drop is important, as is dropping as a team – going solo is an option but one that’s not in the slightest recommended. Different areas sport different tiers of loot and hot zones usually offer up the best quality items, but that can mean entering early firefights weaponless. Often, it’s better to drop further away at the cost of these weapons and make your way to the centre of the map, building up your collection as you go. 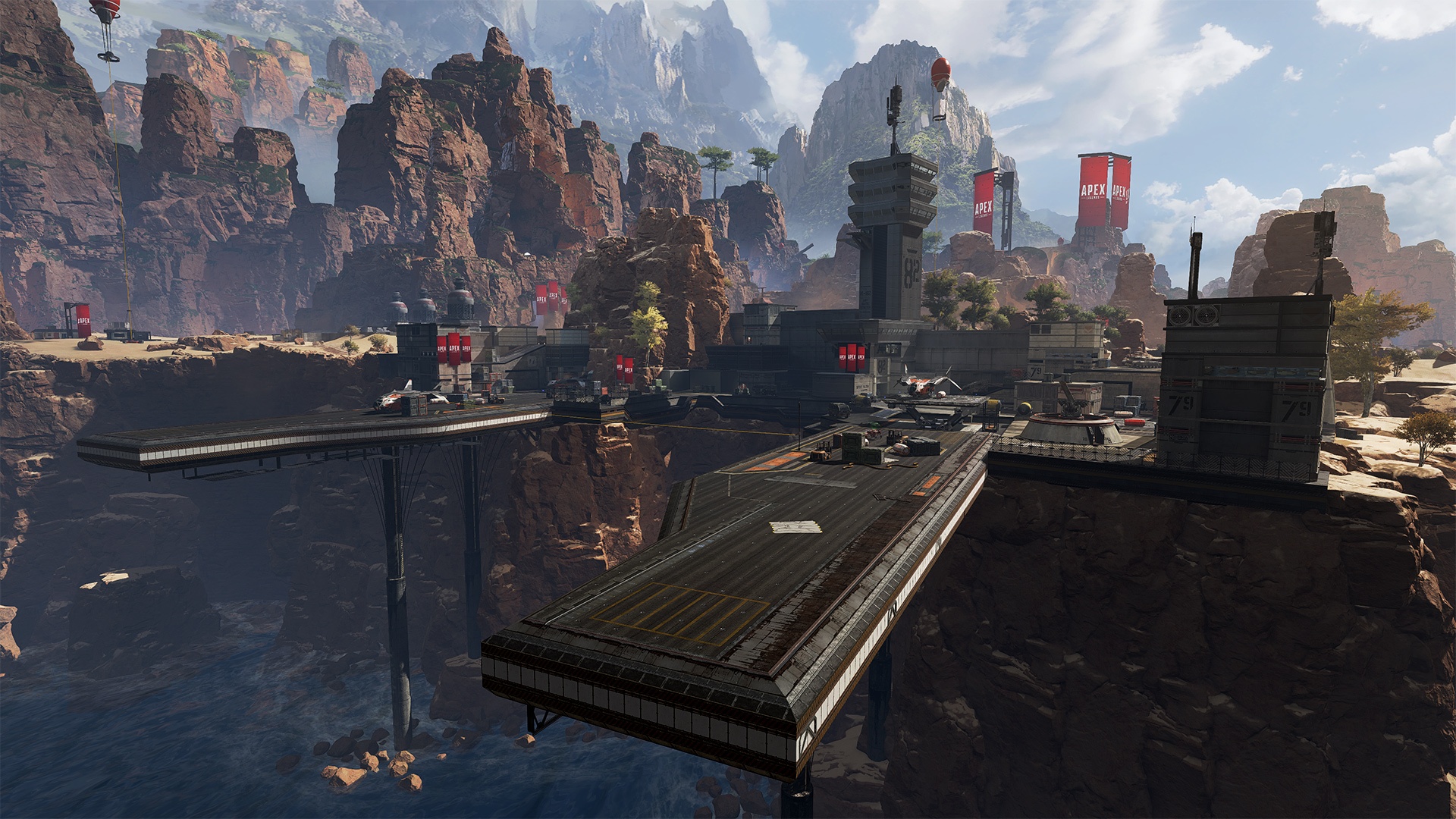 You rely so heavily on teammates, to both stay alive and resurrect you, that making tracks alone often leads to an early grave. If you’re downed, the only way up (bar an incredibly rare item) is to hope a squad mate can reach you before the timer runs out or you’re finished off by an enemy. In the case of the latter, then it’s up to your squad to find a respawn point to bring you back, albeit setting you back to square one; weaponless and vulnerable. Matchmaking is a little hit and miss, especially with no punishment for griefers as of yet, but if you’ve got two friends that play, you’re on to a winner; the game rewards team work and what better way to experience this than with a couple of pals.

At launch the weapon selection is decent with four or so options for each weapon type. Each gun can be equipped with useful buffs such as stabilizers and sights, all of which have to be scavenged too. Each one also has different ammo types, although ammo can sometimes be a bit scarce, so it’s sometimes best to throw down your gun of choice and go for something that won’t give out mid-fight. Due to the fast-paced nature of the game you’ll mostly use machine guns and the like opposed to distance weapons, but it’s nice to have the option there. There’s also several grenades but again, the game focuses on constantly moving so waiting for the timer to go off on these often makes them redundant.

Apex Legends is proof that Titanfall can survive without it’s titular Titans. Respawn took a massive gamble releasing a title set in its popular universe with the glaringly exempt mechs that normally take centre stage, but surprisingly, they aren’t at all missed. It’s mostly down to a fantastic ensemble of characters that are incredibly well designed, with each one proving unique enough for every player to find their niche. The eight launch heroes are distinctive, versatile and offer genuinely enjoyable abilities that make each one feel different to deploy. Lifeline boasts a heal ability that proves vital in almost every match, and her ultimate drops a payload of high tier loot that can be a complete game changer. More aggressive Legends include Gibraltar, a shield dropping juggernaut with an ultimate that litters the battlefield with bombs, and there’s strategic heroes such as Wraith who can open up portals that quickly transport herself and her allies across the map. Having a good balance of heroes is useful, but you’ll find that the abilities of the more aggressive heroes less useful in the fast paced environment when compared to the characters with defensive abilities.

Characters otherwise handle exactly the same (although the heavier characters look and feel like they’re slower), employing similar handling to that of the Titanfall series. While you can’t wall run, you can quickly climb objects to escape enemies, as well as speedily slide downstairs to traverse the map quickly. It’s a super fluid experience and movement is perfect for the game’s style. 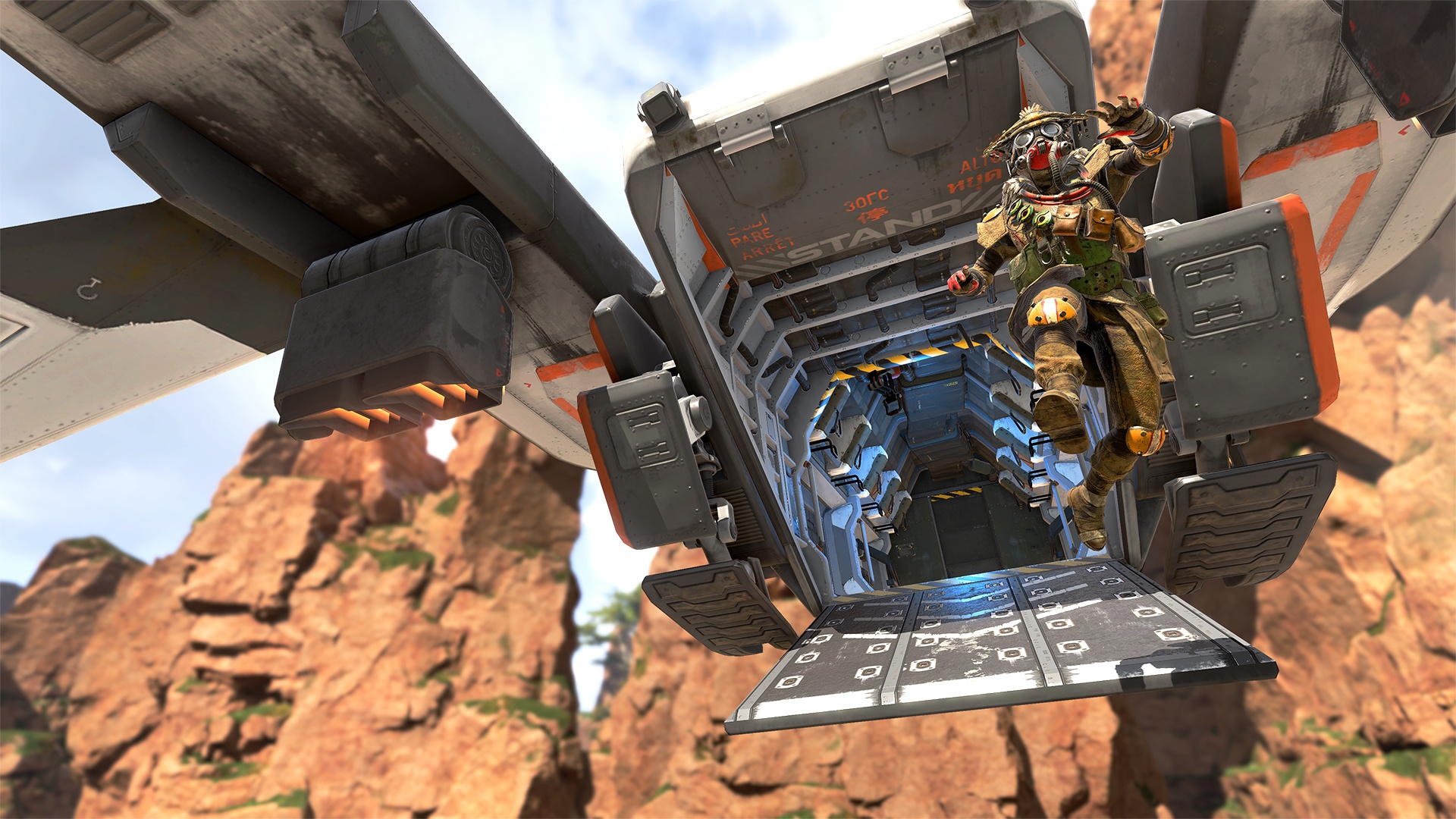 Despite sharing a lot of familiarities with its contemporaries, there’s one thing that Apex does better than any game of this genre, and possibly any multiplayer game ever, which is in-game communication. The ping system allows you to highlight almost everything, from ammo and weapons, to enemy locations. You can strategize with it, for example by pinging areas you’re interested in exploring or keeping your sights on, or even use it to let your squad know what ammo you need. It makes the measly communication wheels in games such as Overwatch seem redundant. For a game where communication is critical it means that everyone, Mic or not, can stay in contact with their team. Furthermore, there’s speech to chat and speech to text options that, while not as sharp as their alternatives due to variation in accents etc are still excellent inclusions. Impressively, the ping system is completely unobtrusive, with commands simple to initiate or cancel which remains imperative in such a fast paced battlefield.

Obviously being free-to-play comes with its own potential pitfalls, namely making the monetised stuff obscenely expensive and necessary to win. Luckily, this is void in Apex, so far the only thing coins can buy you are aesthetic stuff such as skins or voice lines, and despite the bulk of skins being the same across all characters (save for a few unique ones for each Legend) they’re all high quality and well realised. There’s a battle pass coming too, and while details are scarce in regards to cost and content, I’m having so much fun with Apex Legends I don’t mind investing in such a high quality title, after all, I believe Respawn genuinely deserve the support.

Overall, Apex Legends is a beast of a game and for a newly launched title, it’s suffering from very few teething issues. Its compelling cast, fast paced gunplay and slick controls make this a Fortnite killer in every sense. If you don’t believe me, look at the massive player base that’s already formed – after all, 25 million people can’t be wrong.