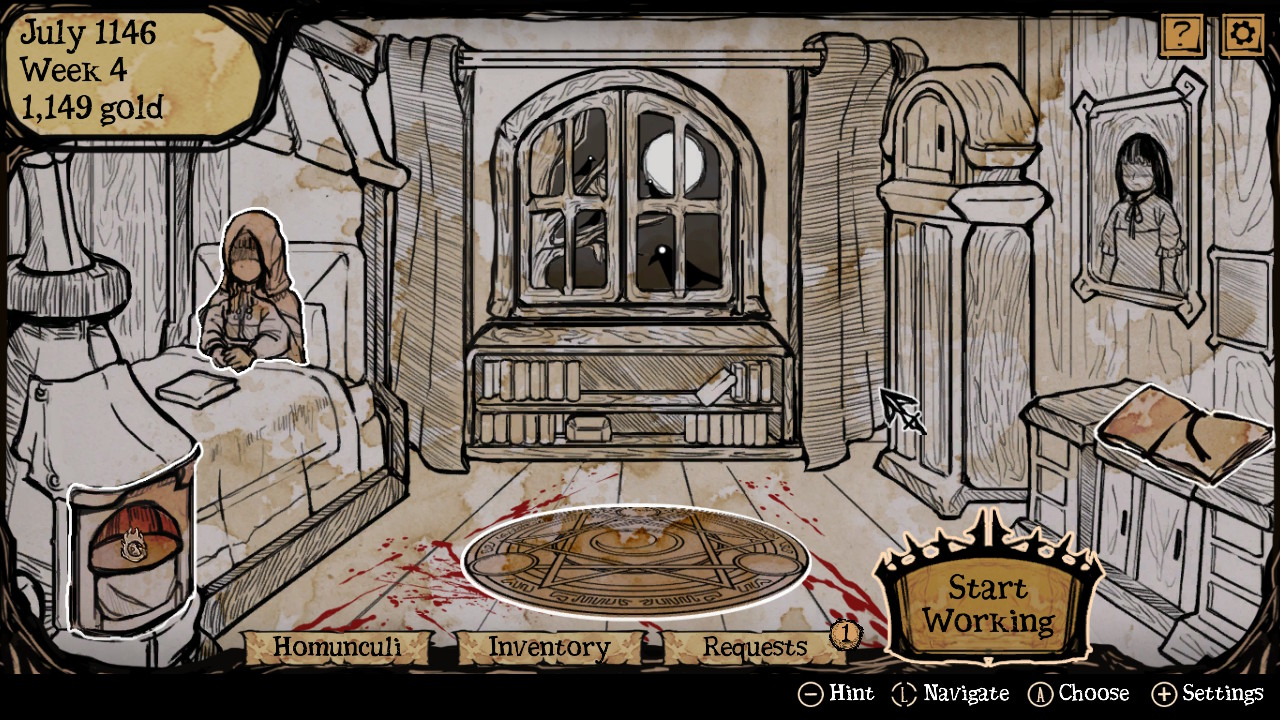 My Lovely Daughter is a game that sets out with the express purpose to disturb and repel the player. Though there is an undercurrent that’s meant to address certain sensitive topics, like child labor, neglect and abuse, it’s done so with a very bizarre tone that almost makes it impossible for a players to fully lock into those ideals in a real world setting. While there’s something to be said for what Gamechanger Studio is trying to say, there’s a much bigger issue in the how it is said, not to mention what’s left when it’s all stripped away: is there still a worthwhile game left underneath?

Faust is the on-the-nose name of our main character who awakens one day, head throbbing, with a severe case of amnesia. He’s not sure who he is, or what he does, but he is aware of one thing: his daughter is dead. She’s sitting in her bedroom, cold as a corpse, and all that remains is a Soul Stone: the product of dark alchemy. Faust realizes he must get this stone back into his daughter so that she may live again, but the process isn’t easy, nor is it pleasant. Faust will create multiple homunculi – human like beings crafted through alchemy from various materials. These materials don’t come cheap, though, and so the homunculi must head into the village and work, getting gold to aid in the creation of their brothers and sisters. Once these beings have become strong enough, Faust must extract the soul stones from them…and only through murder is Faust able to get these artefacts into his possession. 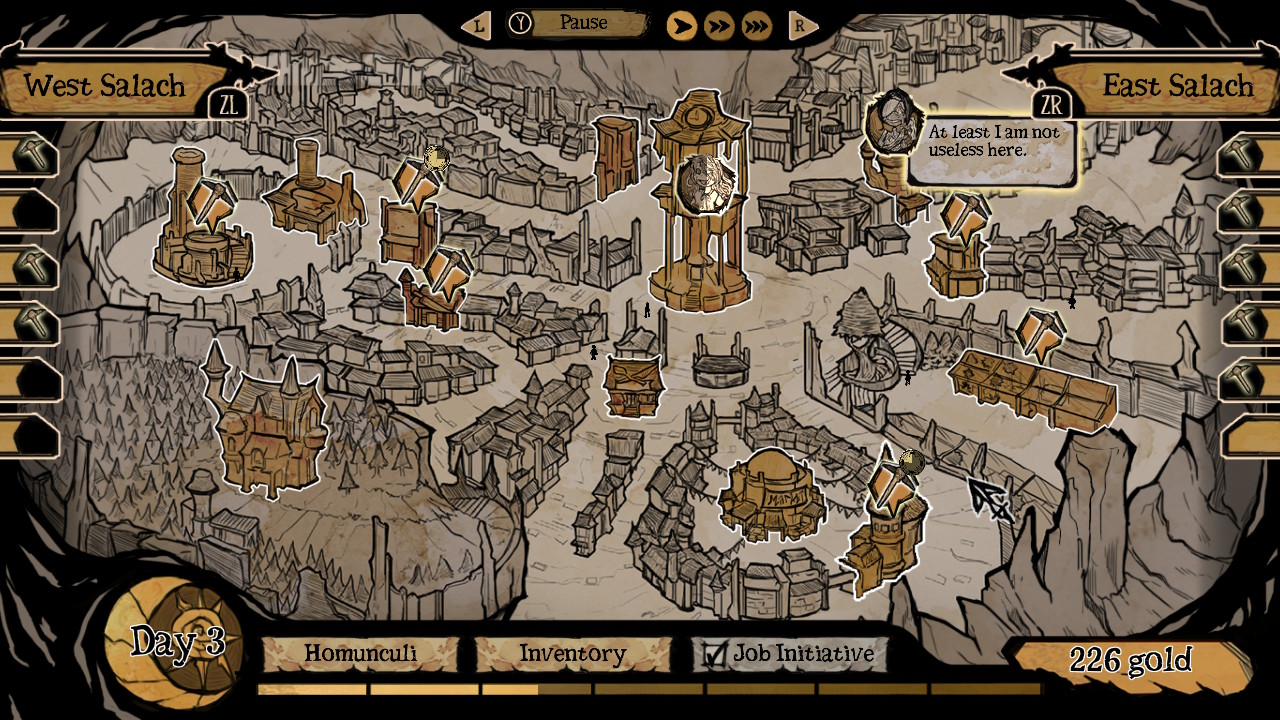 Ignoring the darker elements for a moment, My Lovely Daughter is, essentially, a time management game with a simulation trial and error system built in. You need to make the right homunculi to create affinities to add to your daughters soul: joy, sadness, anger and fear.  Each being you create is attuned to one of these four facets, and then they can increase their potency through work and spending time with you, as well as giving them gifts that you find/buy. When you think they’ve reached their full potential, you snuff them out, adding those attributes to your daughter’s Soul Stone, and start over again. Jobs only last for a limited amount of time, so you need to choose the right work fast: a fear-based homunculi will do best working in a fear-centric job. The gold you get for their work goes into buying new materials to make a new homunculus or two, and repairing the rooms of your home so you can add more and more slaves to your chamber. Oh, and making sure to buy embalming salve to keep your dead daughter’s body fresh, because she starts to stink almost right away.

In terms of just straight gameplay, My Lovely Daughter can be quite boring when you strip away the theme or aesthetics. It’s a lot of the same, over and over, of make, work, kill, repeat. You slowly start to figure out that the entire game, mechanically, is just a matter of trying things until you finally get it right. There’s a book that Faust uses and references to figure out what went wrong with his life prior to awakening, and it’s slowly revealed that he lost his wife and daughter and his job and everything else, so the book acts as a great ledger to chronolog what he’s attempting to do now. You’ll eventually get enough to bring your daughter back to life the first time, but things aren’t quite right, so you need to try again and again…and again, until you get the right combination. In that sense, it’s kind of cool that there are multiple endings that can be found throughout a relatively small game, even if they do circle back to the same themes over and over.

Yet, as you may have guessed, My Lovely Daughter hinges entirely on how it’s presented and the story within. Every single time you create a new homunculus, it needs to be named and housed. You’ll play with it and give it chocolates to build stronger affection, you’ll do your best to choose the right jobs so that it suits the personality best. You’ll get letters slipped under the doors, telling you how much fun they’re having and how much they love you. Then you need to kill them to take their essence, and it’s never just a “now is dead” sort of thing. Every murder has last, pleading words before you confirm, and then a small blurb to read to describe what you did as well as artwork to accompany it. Then seeing their entries in your book, along with copies of their letters to their “dad…” it’s a dead feeling. Everything is deeply and truly upsetting in this aspect, and it is driven further by reading the book and seeing that Faust does care so much for this lost life, and wants it back so badly. Since the character’s name is FAUST, however, you can imagine that nothing is really straightforward or easy in this regard, and, ultimately, nothing feels like it’s resolved. 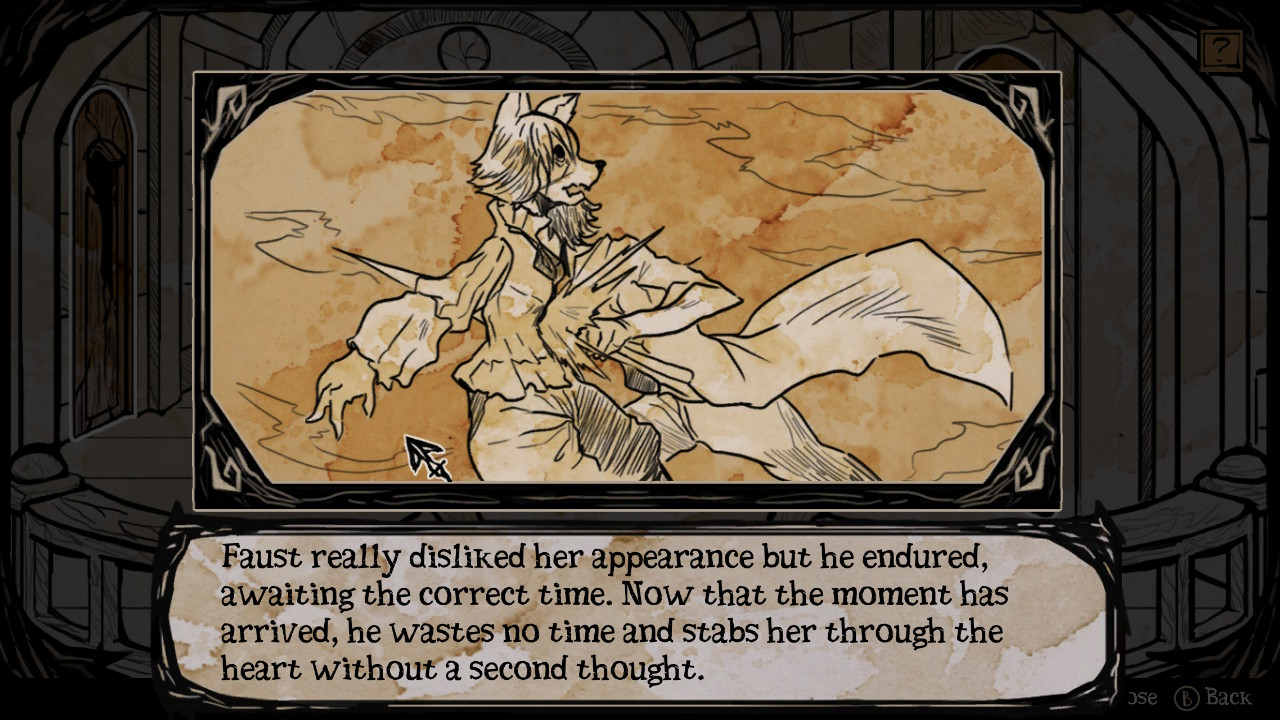 While the art style of My Lovely Daughter is appropriately gothic, there’s too much disconnect for most players to really feel like I’m being taught a lesson in any way. The disclaimer at the beginning of the game gives the impression that I should learn something from this, but nothing is taught that most people would not already know. The villagers turn a blind eye to the horror of the creation and destruction of the homunculus, but isn’t that already widespread with the use of child slaves and soldiers the world over? The fact that Faust is in a hell of his own making doesn’t necessarily seem to matter when you’re hellbent on trying to get the ending that makes everything tie together, but, without spoiling too much, the “true” ending makes a paradox of ends justifying means, and it doesn’t feel organic or logical. With Layers of Fear, realizing the truth about what became of the man’s family is a terrifying revelation that makes perfect sense once you put together all the clues. My Lovely Daughter is missing a chicken and egg moment that keeps the player in a state of confusion as everything circles the drain. The addition of the Inquisitor DLC to the Switch version does add some extra content, however, including an ending that feels far more appropriate for the overall theme of the game. You’ll know it when you see it.

My Lovely Daughter has a lot of interesting content from an artistic perspective, and I cannot deny that it accomplished its goal in unsettling me and making me think about it. For players who are collectors of oddball titles that capture something other mediums do not, this is a fine addition to the shelf, and I pray we can all do some kind of grouping for our digital Switch titles soon. If you’re looking for something with more than a few hours worth of gameplay, though, you won’t find it here, and I have neither the temperament nor the stomach to go back and play it again. Come for the disturbing story, stay for the repetitive gameplay, and really consider hugging your kids when all is said and done.

My Lovely Daughter is certainly a haunting tale to tell, but the meat and bones of the game – repetitive task assignment – is just an undying chore.