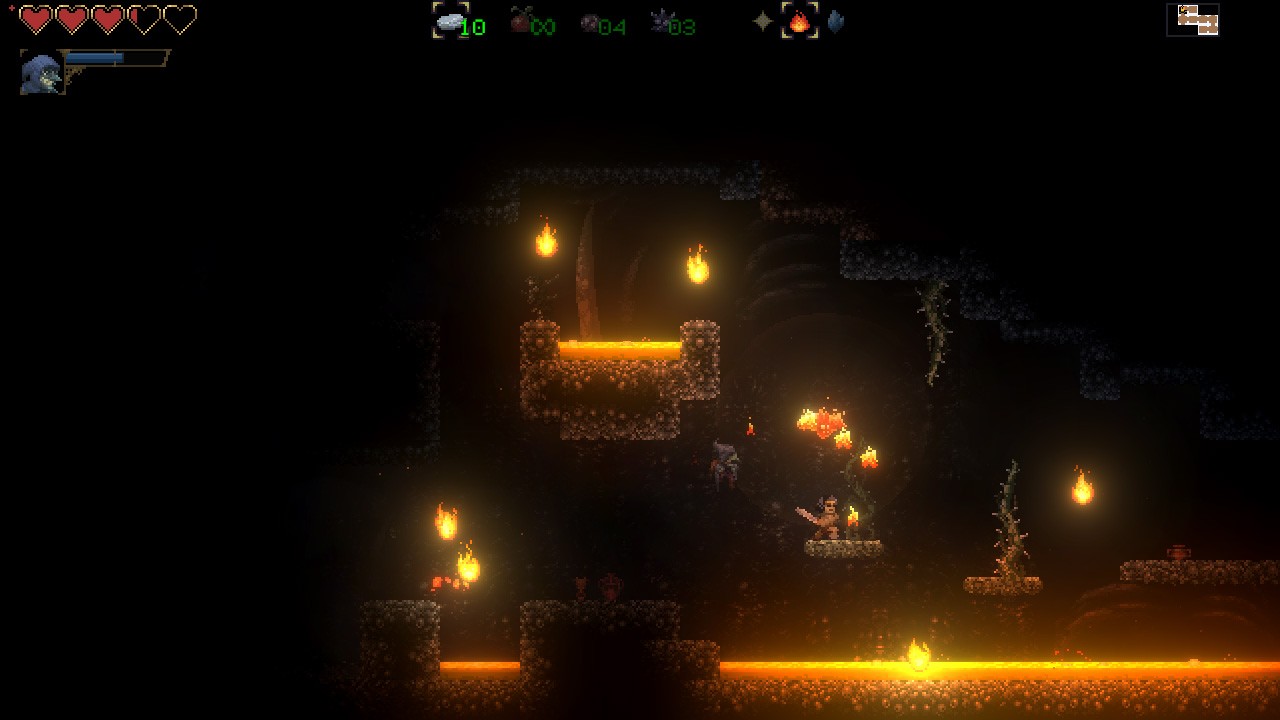 You’re quite possibly looking over this title thinking was that a typo on ‘barbarian’? No; the spell checker is wrong: this is Batbarian: Testament of the Primordials, the legend of cave-dwelling and bat control. Batman and Batwoman were taken. Wrapped in a barbaric loincloth or two to verify that this is indeed a fantasy-based game (this is confirmed by the appearance of orcs in an early flashback), you take control of the hero/heroine as they attempt to escape a cave they seem to have fallen into.

Batbarian: Testament of the Primordials is like most retro platformers on the surface. But labelling is soon thrown out the window, and you dive straight into this brilliant game, on a path to either escape your dark prison or reap the rewards by collecting lots of coins. Just to set this up, you pick either a male or female barbarian – only cosmetic differences as the dialogue is the same, and find yourself falling to your death – with an apt dialogue choice to chat about nothing or scream. About five or so minutes in, you get a flashback that shows you falling to your death after being prodded by some orcs. Now, you find yourself trapped and have to escape with the assistance of your bat companion. 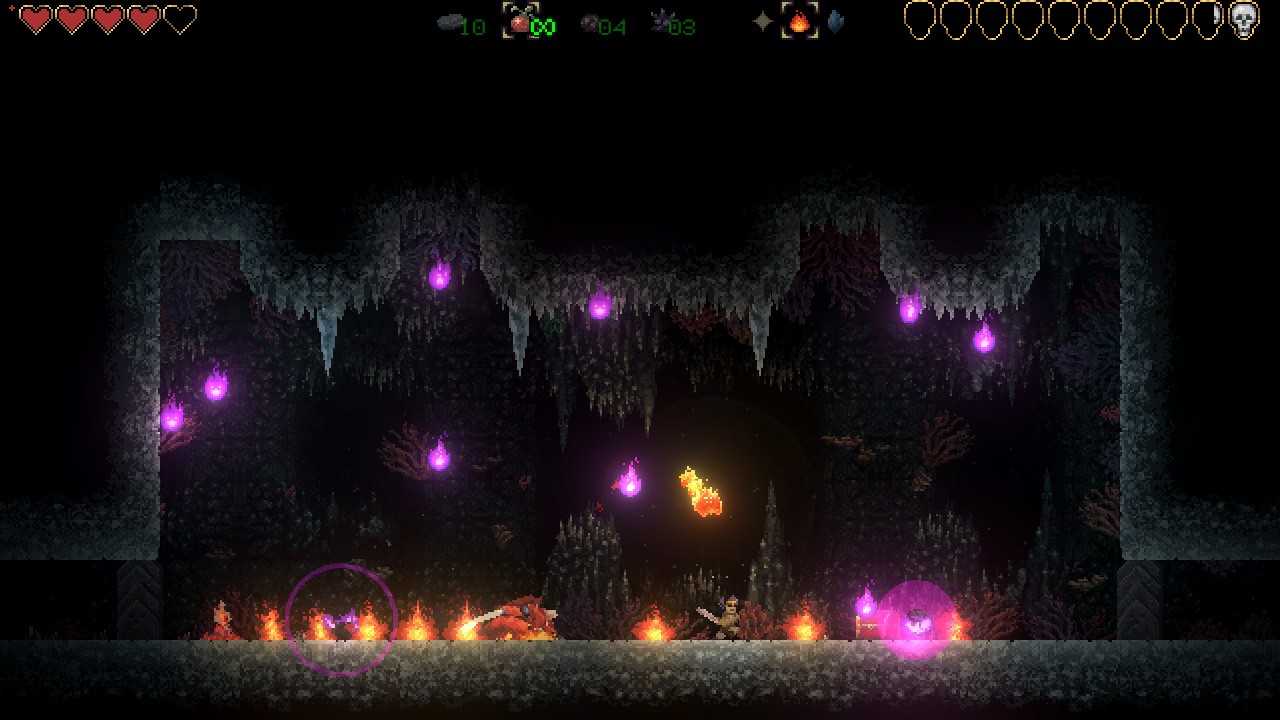 Typically, the area isn’t very well lit as you’re deep underground, but there are some lanterns in place. These are usually triggered by walking into them, but in a lot of situations, they are out of reach, so you have to use your luminescent bat to light them up. Simply asking won’t do, you throw berries in the direction you want them to go using the right stick to aim, then letting go. Additionally, you can pick up rocks to throw at the levers, and also enemies, but alas they’re limited. It’s worth noting that as helpful as your bat, Pip, can, be, they can also light lanterns that remove platforms you need to reach other areas. In this case, you can throw sticky berries away from you, buying you just a little more time until they catch up.

Platforming is very good, and initially, you have a simple jump that evolves into a running jump to reach higher places and longer distances. You can either use the analogue or d-pad controller to move about, but it’s down to your preference as both feel pretty tight and despite the odd miscalculated jump, the controls are responsive, as is the combat. As a melee-based fighter, you get up close and personal and get away with button-bashing if needs be with the occasional ranged attack, made better by your companions. They will follow you around, such as the wizard and you can fire their magic with the x button, pending you kill lesser enemies to fuel their manner.

Batbarian: Testament of the Primordials is a very self-aware title, and you’ll either love or hate the humour. I loved it as you often get the choice to respond ludicrously, on par with say something like the Monkey Island series. There didn’t appear to be any consequences for your quips, but well worth reading through the options. The comedy doesn’t feel forced and keeps the momentum relatively fresh, and the engagement with NPCs almost feels like a little reward to an extent. Speaking of rewards, like any decent RPG, Batbarian: Testament of the Primordials has a few levelling up mechanics – an improvement in strength, that sort of thing, and among the goodies you can pick up, you’ll have access to a fruit machine that gives you three chances to level up randomly. It’s pretty funny, and if you don’t get what you want, the alternatives still help. 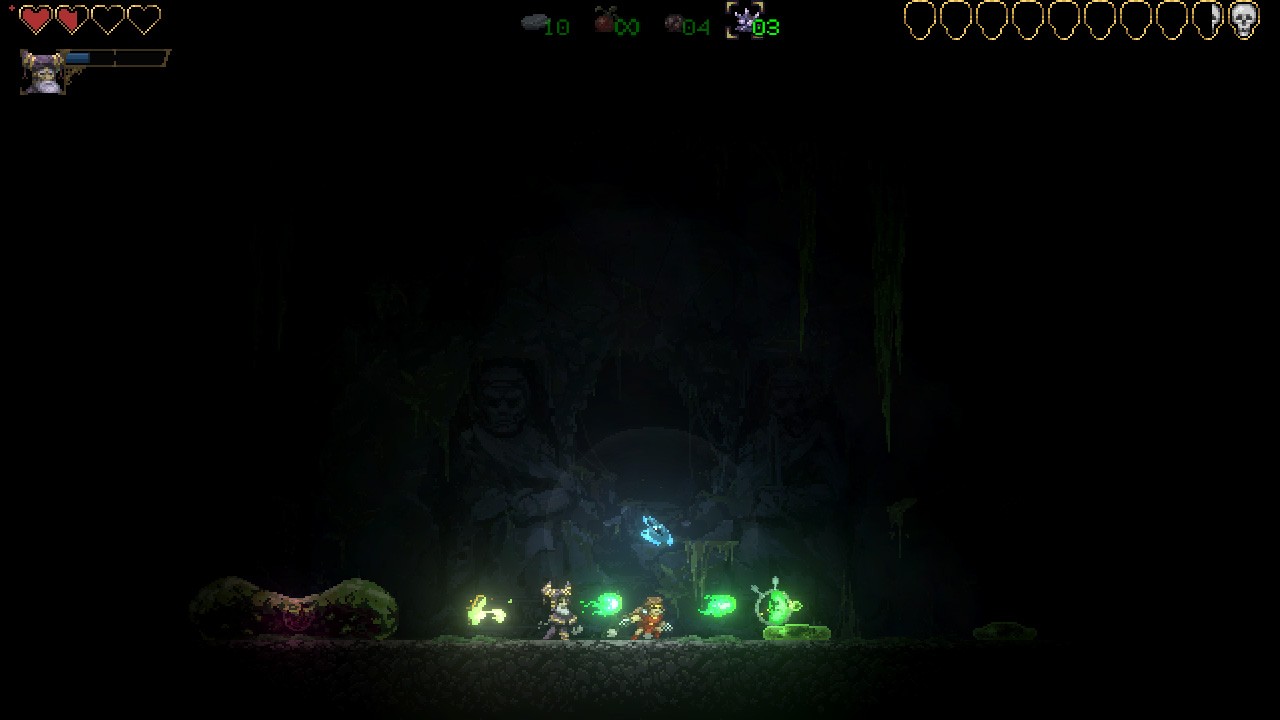 For a simple-looking title, Batbarian: Testament of the Primordials is very enjoyable with lots of hooks to keep you playing, despite the appearance that this is a one-trick pony. While a lot of the areas and puzzles look the same, I never once found it dull or repetitive enough that I considered stopping playing. The only time that occurred was the boss battles. As combat is quite simple, there isn’t much scope, nor room for error, so I ended up dying a few times that I would have preferred. Still, there are many bonfires scattered about (no, it’s not a Dark Souls clone) and you can save your game a restore a little health. Sure, it’s not fun to have to repeat the same sections, but at least you don’t have to start from the beginning.

In an age where retro and pixel art games are in abundance, a lot of these games feel the same without any real standout points. In Batbarian: Testament of the Primordials’ defence, the bat mechanic is a lot of fun, and the way the screen lights up is enjoyable. But the real highlight is the humour – it doesn’t take itself seriously, incredibly human, and makes the experience oh so much fun.

Batbarian: Testament of the Primordials Review

A platform puzzle game that feels like an adventure, its strongest point isn’t its steel, but cutting wit throughout. On the surface, it’s a run of the mill platformer with a retro aesthetic, but deep down, it’s an enjoyable experience.