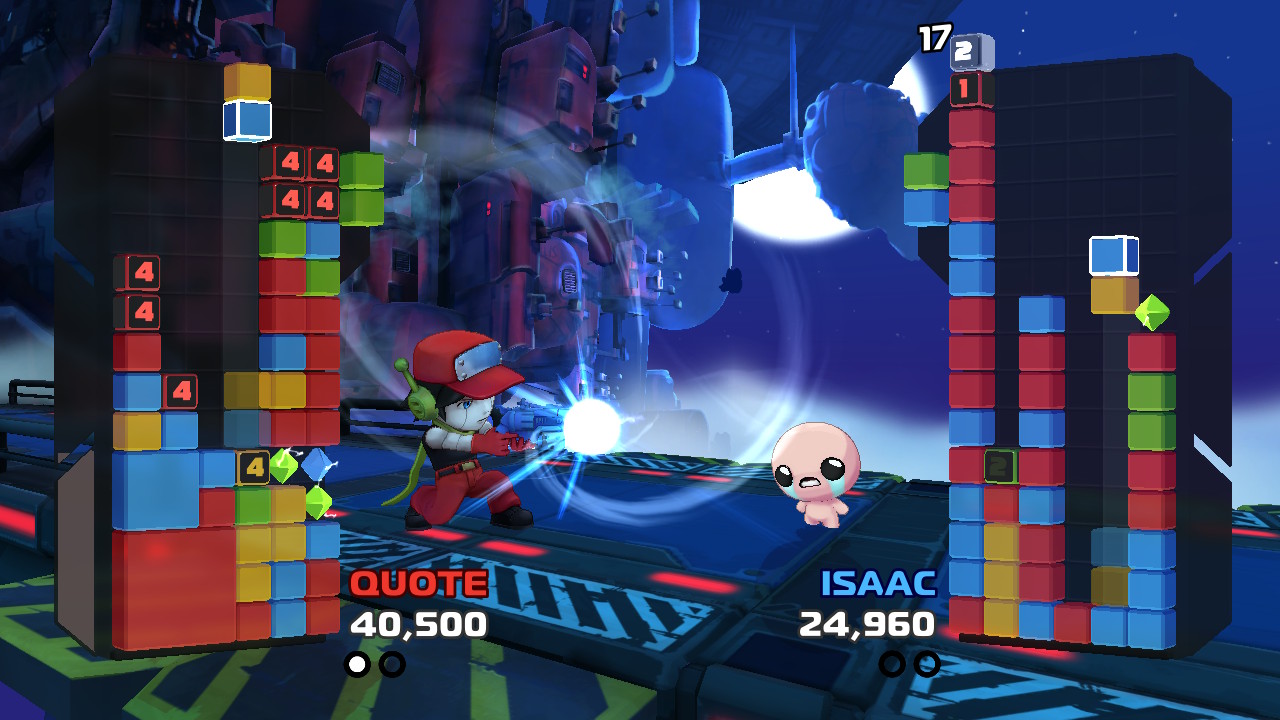 It’s been roughly ten months since Nicalis hit us with Blade Strangers, the impossibly odd but strangely fun fighting game that brought characters in from all walks of life. It became clear that Nicalis wants to make sure it takes advantage of every horse in the stable, from Umihara Kawase to Isaac to some Tezuka characters that got picked up because sure, why not. After that, Nicalis teased that we would be seeing another crossover title, and I’ve been waiting, with bated breath, for what was to come next. Now, at last, the long-awaited Crystal Crisis has finally landed on the Switch, and, for the right kind of player, it’s a massive game changer.

Believe it or not, there is a story sitting in the center of Crystal Crisis. Basically, there’s this Red Crystal, which represents the epitome of power, and it’s so damn strong that it’s torn a rift in space, time and dimensions. The result is now a bunch of worlds that are normally separated are now able to access each other through portals. It’s very similar, in some regard, to how they explain the different characters fighting each out in Blade Strangers, but this one is more open ended and traditional: the hunt for a powerful artifact is reason enough for Astro Boy, Solange and Johnny Turbo (wait, what?) to fight against power hungry bad guys who are also somewhat familiar, such as Akuji the Demon, but I don’t want to give away everything. With twenty characters, there’s literally someone for everyone, both in aesthetics and execution.

Crystal Crisis is a tile matching competitive puzzle game that carries a massive number of unlockable characters, modes and ideas within it. The core mechanic is as such: you get two blocks at a time, usually of different colors, and you can spin them on a 90 degree axis to position them before dropping. Four blocks together in a square formation make a massive, single block, and this block can grow in either a square or rectangle shape as long as it’s symmetrical.  You’ll eventually get a crystal bomb, that is then used to blow up the big block (or series of small blocks) as long as they’re touching, and this punishes the other player by dropping blocks on them. Chain multiple explosion together through angles and timing to hit even harder. There’s also a couple of speciality items that automatically destroy all of one color block on the screen, and if this sounds familiar to you at all it’s because it’s the same core principle as one of the greatest games of all time: Super Puzzle Fighter II Turbo. If you were a fan of insane puzzle games during the PS2 or Dreamcast era, you know this game, and it’s addictive as anything. 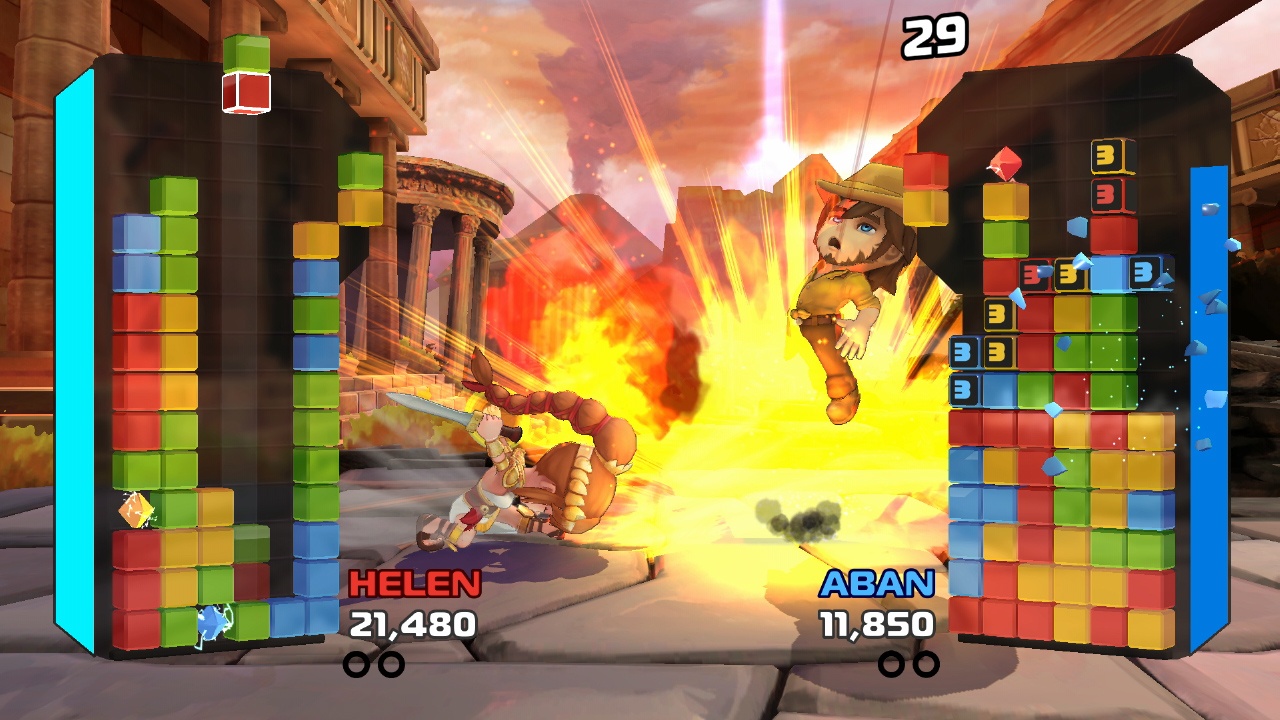 Naturally, each character that you get in Crystal Crisis has different “attack” patterns, meaning the variety of colors that they drop in retaliation is different for everyone. For players who are very casual and just looking to enjoy the game’s idea and presentation, you won’t need to worry too much about this as long as you keep the difficulty level to normal or lower (and game speed at 1)and just have a good time. However, for higher echelons of play and difficulty (looking at you, survival mode), you’ll want to learn and understand how you attack and how you get attacked in return. For example, if you do happen to pick Akuji, you’ll notice that he’s got a small core of red in the middle of an otherwise well-varied field. If you hit your opponent with a large combo and they can survive, you may have set them up with a multi-chained retort that can easily put you in a rough spot. There isn’t any character who is wildly unbalanced in terms of the traditional rebuttal, though the new mechanics of Crystal Crisis do make for more interesting situations.

Crystal Crisis offers two things that make it a bit of a wild leap from other tile battling games: wrapping and bursts. The wrap effect, which can be turned on and off, allows for players to move in a full loop around their screen, which not only means potentially faster jumping to opposite ends of play BUT you can also split your blocks. This is huge, as the potential to build up single towers without needing to intersperse off colors goes up, and it’s a skill that takes a while to do properly but can benefit you a ton in trying to get through the story mode, which is a shockingly long task.  If you get the wrap down, so will the computer, so just be aware of it, and make sure to get good at it before springing it on friends who might be unfamiliar. You’ll be ruler of the roost in no time flat. Also, remember to turn it off before you get punched in the head on higher difficulties, because, shocker, the computer is way better than I am. 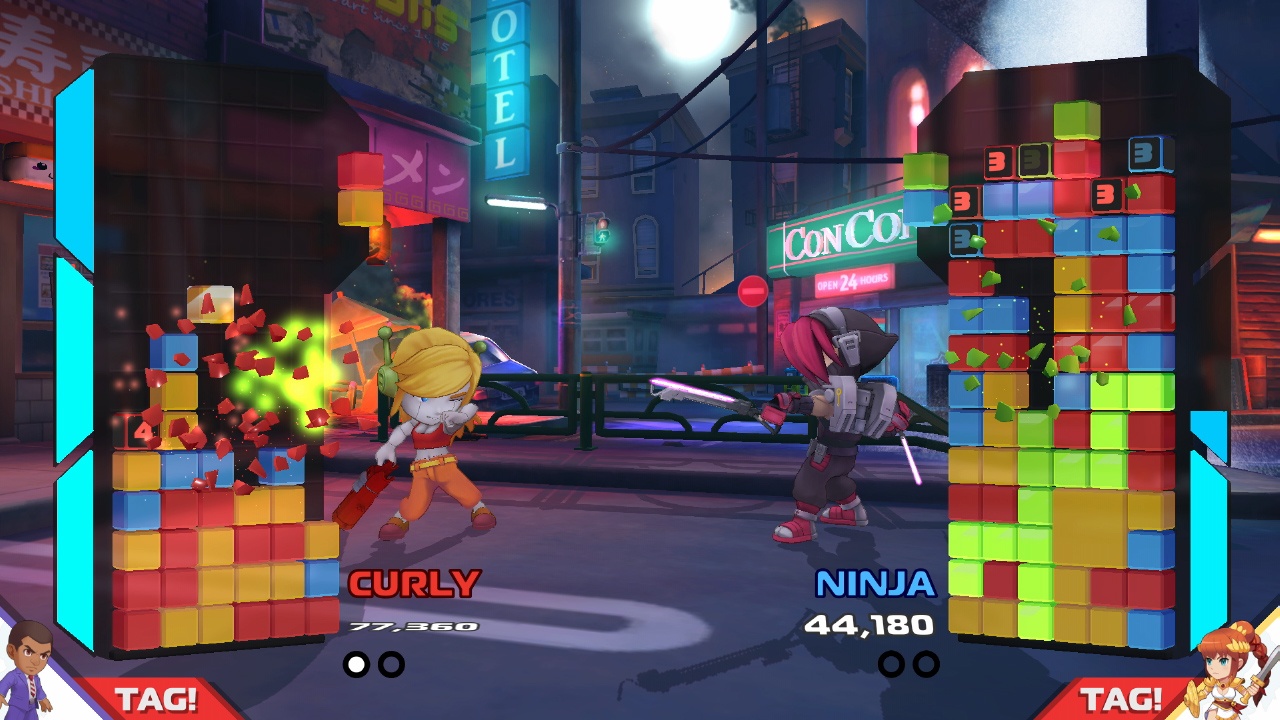 The burst effects are probably the coolest part of the gameplay, affording players a chargeable meter and two forms of execution. As you perform combos, you generate more juice to the meter, which allows you to do either offensive or defensive manoeuvres. These can range, on the offensive side, from slamming the opponent with blocks to purposely destroying their giant bricks before they can, to the defensive, which can eliminate blocks you don’t need, remove a ton that are clogging up your screen, or changing some colors to make your next attack even sweeter. The more filled the meter is, the more potent the attack can be, so keep this in mind before firing off anything. My personal favorite is Johnny Turbo using some of his Turbo energy to prevent the opponent from speed-slamming their blocks, effectively stopping them from being any threat for a couple of turns. If you’re a bit unsure of the timing of these things, I recommend turning on the burst assist, which’ll automatically fire off a burst if you’re about to die and can’t see death when it’s staring you in the blocks. Again, very helpful for story mode. Also again, if you hate the extra mechanic, you can turn it off in the options. Nicalis were very aware they were trying new things and that not everyone would want it, so this is incredibly forward thinking of them

Crystal Crisis is very interesting in presentation, though I’m still not sure if I completely love it. The character sprites and voices are fantastic, sure, and the animations between fights plus the short animations from doing bursts are both cool and funny, so there’s no complaint there. However, the default visual is something called “grid mode,” which puts both players’ fields in a slightly askew manner. If you’ve ever watched The Magicians and seen when they visit the Library, you’ll have an idea, but it’s basically like the game is shown at an angle from the side. It probably adds to some cool perspective, and allows the sprites to have different mannerisms than something flat, but i seriously didn’t enjoy it and it made me a bit sick. Thankfully, once again, it can be disabled in the options. So, if you’ve been paying attention, you can play this game with crazy board physics, awesome power moves, and a different perspective, or you can disable all of it and just have a good tile fighter with a ton of characters.

In overall execution, Crystal Crisis has succeeded wildly as a game that fills a niche that’s certainly dry and empty on the Switch. Firing off games of Crystal Crisis can be fast and easy, and it’s a concept that anyone can pick up, though few can master. There are a ton of single player game modes, a lot of achievements to work towards, galleries to learn more about the game and see what you’ve unlocked, and an online versus match that should be well populated once the game launches officially. The only complaint I have is slightly long load times between the menus and the fights, but I feel like the payoff for these load times is a distinct lack of lag or problem in the main game itself. Plus, like the aforementioned Puzzle Fighter, the novelty is here with plenty of meat to back it up. Having Solange fight Blackjack by hurling waves of blocks at each other with dramatic poses, sayings (all voiced in Japanese, THANK YOU) and interesting techniques is damn fun, and can be enjoyed by most everyone. I totally support this great endeavor that Nicalis has accomplished, and I hope we see more crossover titles like this in the future. For now, I’m going online to wait for players to start to appear: I wanna get ranked as Isaac as soon as possible, and I’ve got a terribly unfair advantage with the last week of play practice.

Crystal Crisis finally brings competitive tile puzzles to the Switch with a fresh cavalcade of characters, some innovative techniques, and plenty for everyone.