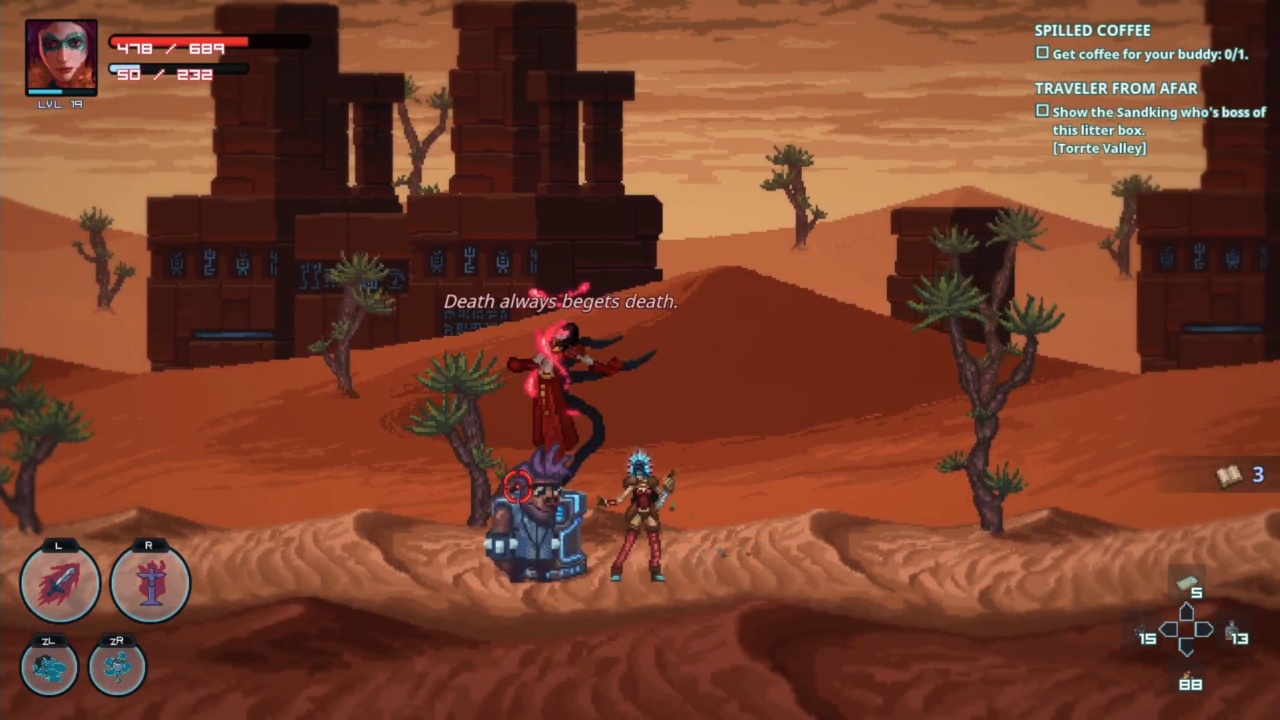 Warlocks 2: God Slayers might initially have new players scratching their heads, trying to figure out where the original Warlocks is. As it turns out, the first game from Frozen District was called Warlocks Vs Shadows, and was nowhere to be found on a Nintendo console. Another crowdfunded title, Warlocks Vs. Shadows was received with a sort of tepid atmosphere: the game was fun enough, but was only available on Steam and, strangely enough, Playstation 4. An RPG brawler, there was enough to keep it entertaining but not enough to really crack anyone’s top ten lists. Well, Frozen District decided to join forces with Fat Dog Games and Qubic to give it another try with a new release that, at first, seems to be a limited Switch exclusive. Warlocks 2: God Slayers will come to Steam at a later date, but the Nintendo faithful get to give it the first impression.

In Warlocks 2: God Slayers, you and up to three friends play a character of different strange skill classes (Spirit Lord, Pyrodancer, Drunk Goat) who’ve been taken prisoner by, I dunno, let’s say slavers. You’re offered a chance of freedom from Noddy the Shaman under the condition that you come and check out the Order of Warlocks, a Guild that does quests and kills monsters around the world using dimensional portals. Things go alright for a bit until the Evil Gods get angry that you’re killing all their monsters, and now it’s time for you to stop being a nuisance and die. Thankfully, because this isn’t called “Murdered to Death Simulator,” you can power yourself up and get ready for some toe-to-toe action with so-called deities, and maybe prove that you can’t just tell a good fight to curl up and die. 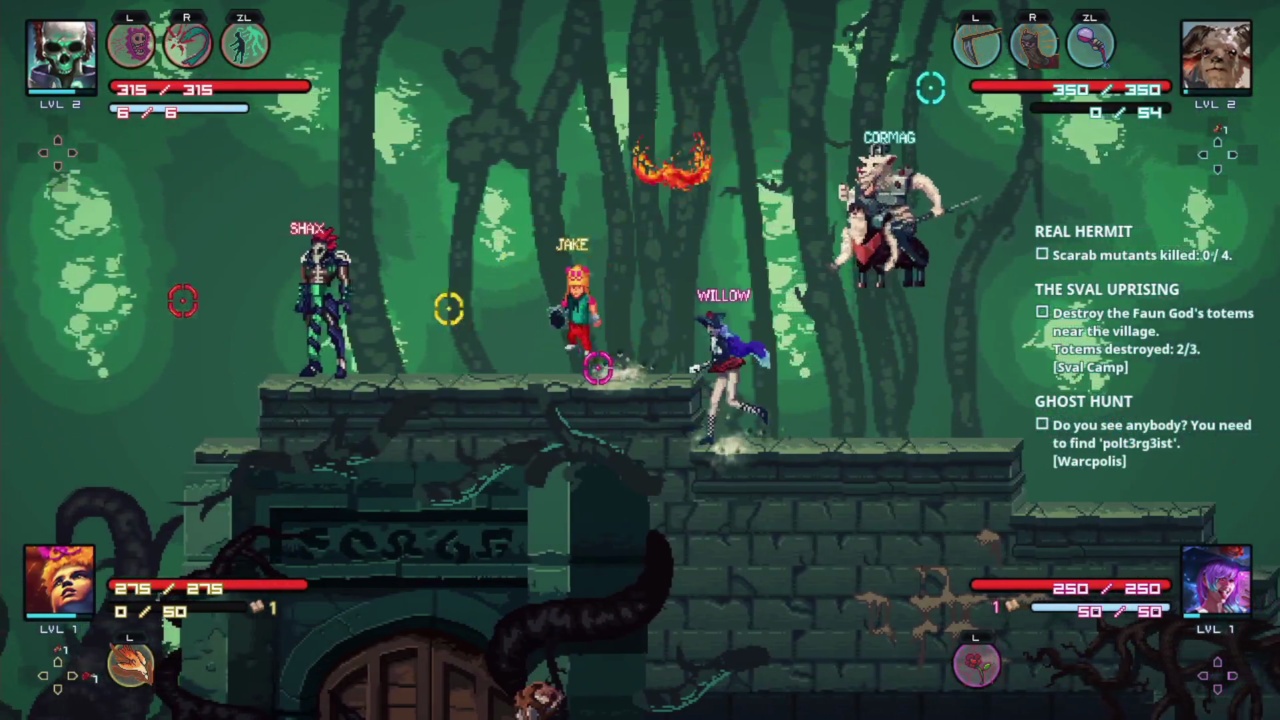 With Warlocks 2: God Slayers, you get dispatched for a series of quests that take place in different parts of this mythical world. It works best as a multiplayer experience: if you’ve participated in raids in MMORPGs, you might have an inkling of why things become more fun. Players are able to choose different characters to balance out strengths and weaknesses, compete to see who does the most damage in wave battles, and grab loot that’s dropped from enemies. Especially at first, the loot tends to be inconsequential items that can be sold for fun and profit, but, gradually, you find actual equipment and even some damage modifiers. I call them damage modifiers because they’re never actually weapons. For the characters of Warlocks 2, all damage is done in timed cooldown energy blasts, with various ranges (Cormag’s swing is much shorter than Styx’s bolts, but recharges faster) with some enhancements mixed in. You get into an objectively set pattern of knowing where you need to stand in order to strike, when you need to pull back, and when you simply need to accept this battle won’t be finished easily. In some cases (especially with boss battles), finding out when to run, hide, lick your wounds and try again is essential to, well, not being totally dead.

When it comes to presentation, Warlocks 2: God Slayers ticks a lot of great boxes in the visuals department. A strong upgrade from the first installation, all the characters look a bit pixelated on the selection screen but are clear and detailed once you get into the actual game. The NPCs all have a distinct style about them, from the inconsequential but annoying imps running about to the different styles of archers, knights and necromancers who’re trying to do you in. The aforementioned boss battles are magnificent, and really do a great job of impressing size upon you. Similar to Sundered, once you get into a boss battle you feel the gravity of the fight, and you have to do your best to find weak points and not get slaughtered in the process. The visuals, again, are a good reason to have multiple players diving into this at once: seeing how everyone interacts in fights and compliments each other leads to some really good experiences during the more difficult quests and especially in boss fights. 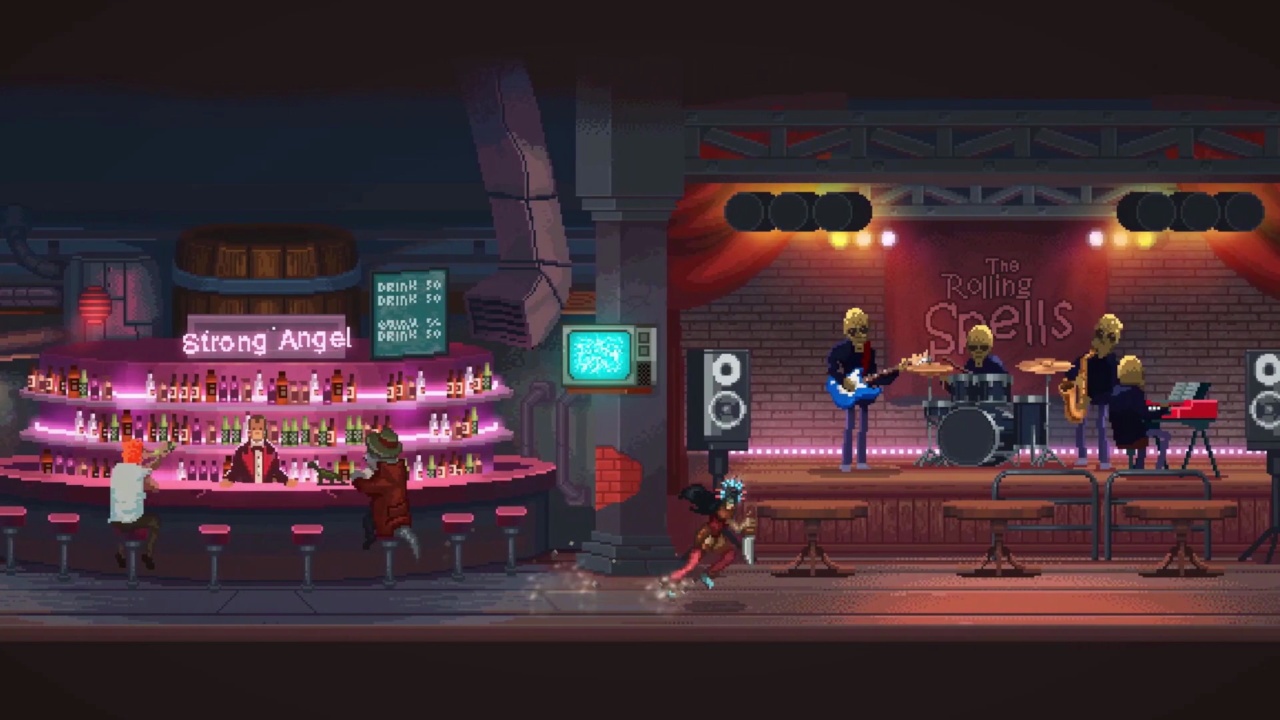 Warlocks 2 does take a WHILE to get good, however, and that might be a large deterrent for a lot of players. The gold drops from enemies at the beginning is pathetic, and you’ll be several quests into the game before you can even afford to buy another piece of equipment to try and boost yourself. The maps aren’t too big, but it can be annoying to traverse them over and over again if you die during a particularly heavy enemy wave (and you will) or if you decide to teleport back and unload some of the mishmash you’ve picked up during the course of your adventure. There are some really cool skills that characters eventually get to unlock, but it takes quite a few levels, and you don’t really feel like you’re getting stronger during those times, just adding more stuff to your screen without a lot of payoff. And as for the single player grind…oof. Remember how I said that the gameplay felt like an MMORPG? Those are always a lot more fun with other people, which is why the second M is in the damn title. Even if you don’t have someone right next to you to play, you can always join a guild or just latch onto someone else’s party and go off. Instead, with Warlocks 2, you gotta have someone with you right there, from the very beginning, or you just feel the game gets lackluster. It’s a grindfest intermixed with some funny but eye rolling dialogue and some truly repetitive music.

As cool as the boss battles are, they’re not the only part of the game, and the quests themselves are often a lot of the same: destroy something, find something, kill other things, and the payoff never feels equivocal to the effort put in. At the end of the day, that’s what Warlocks 2: God Slayers really boils down to. It’s a multiplayer grind that’s balanced by having other people there to share the experience and challenge things up for you. I love the Drunk Goat as much as the next person, and I got a few good chuckles out of what was happening on-screen, but nothing flew high enough to keep me motivated or was lowball enough to slam out in a couple of minutes. If you were a fan of the first Warlocks vs Shadows, then this is right up your alley, with better graphics, improved skills and more humor. If you want something that’s a real action RPG, however, this one might be a bit too off-beat to really land.

Warlocks 2: God Slayers might be the sequel that fans of the original have been craving, but it’s lackluster for newcomers who aren’t onboard with the approach.