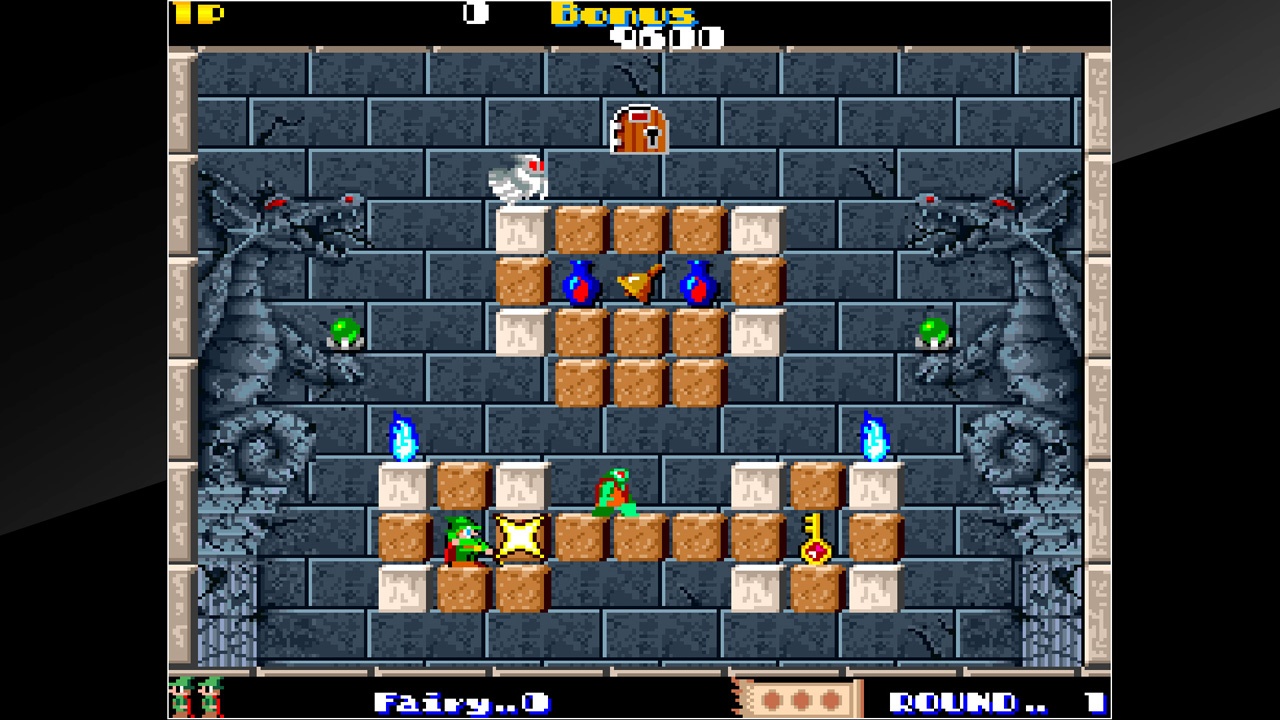 The competition to lock down the retro titles is becoming a bit of a fragmented environment on the Switch, but I’m glad to see that Hamster is still getting work regardless. Whether it’s Konami locking down arcade versions of their NES classics or the NEO GEO team seeing if anyone still wants a horse racing simulation, these fine people have been permanently given a great position in modern retro history. The Arcade Archives have still been a fun, bright spot on the release calendar, giving a better glimpse into the arcade culture of yesterday, and the most recent addition to my library, Solomon’s Key, is certainly no exception.

If the name sounds familiar, you may have had a go with the NES release of the late 80s, or maybe you went ahead and grabbed it on the Virtual Console back in 2006 (remember that, Nintendo?). You play a wizard named Dana, and you’re going through a massive castle of demons and traps to find the fabled Solomon’s Key, which will lock away darkness once again and save the world from evil. Dana is alone in this quest, and there are fifty rooms to get through, and you’re only going to be able to die so much before the game is over. Oh, and there’s no saves or password systems, because this is an arcade game, so buckle up, you gotta do this ALL at once. Or, you should, but really, the Hamster ports allows for save states and unlimited coins, so you’re never in real danger.

As mentioned above, Solomon’s Key is all about getting a key in each and every room, and then getting your behind to the door in order to escape. There are enemies abound, and plenty of things between you and that exit to make your life hard. You have two activities to give you an edge: block making and fireballs. Block making (and also block removal) is how Dana is able to get to the keys, as each room tends to be vertical and requires a lot of jumping in order to get to the goal. You can only do small, pithy jumps onto blocks that are directly in front of you, so you gotta really work on your technique to make sure you add and remove blocks properly to make a stairway and get where you need to go. You can also remove blocks Mario style by headbutting them twice, and this talent may save your life and prevent enemies from eating you at least a couple of times. Fireballs are…well, fireballs are nice and all. They generally one shot enemies and clean up things, but they’re also limited. You can recharge the three balls you’re allowed over time, and you can find items (by and by) to increase the total that you have in reserve, but you shouldn’t be too dependent on them by any means. The blocks – the unlimited, ever growing blocks – are your real source of power. 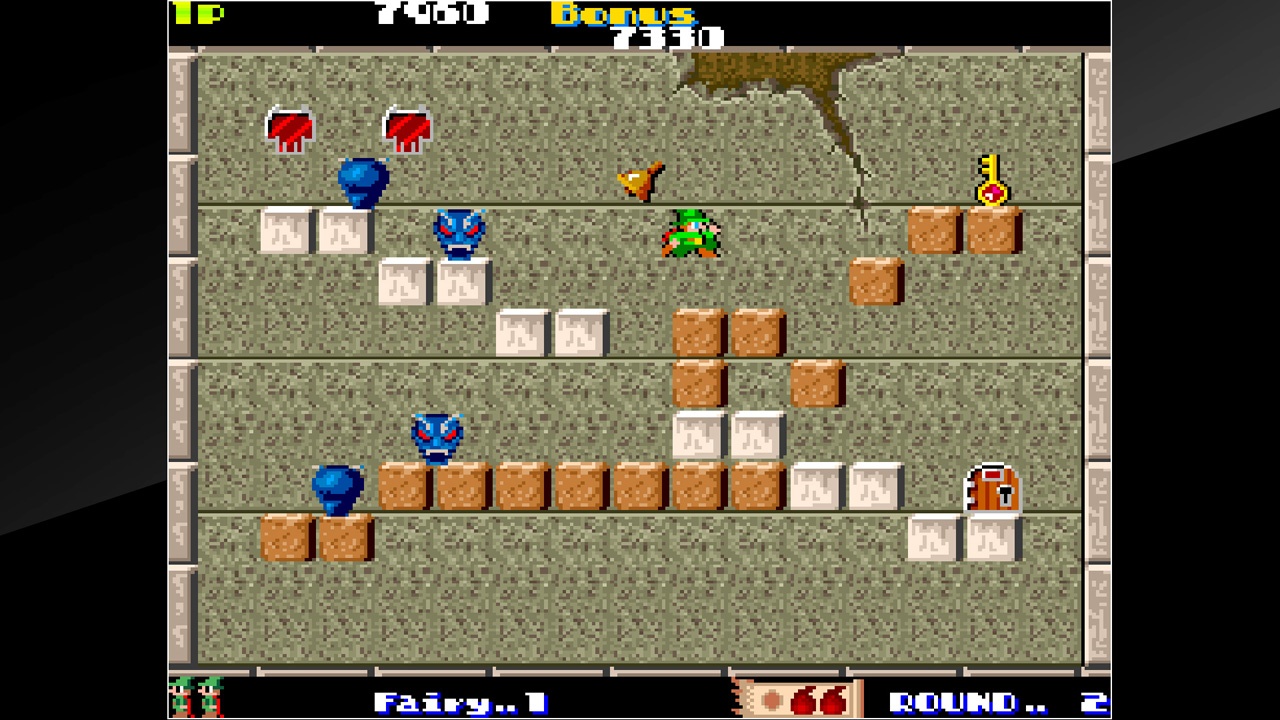 Figuring out exactly how to navigate and utilize Dana and their talents level by level is one of the biggest factors in enjoying Solomon’s Key. At its heart, it’s a puzzle game with a two form time factor: an actual timer that counts down (those precious points!) and the enemies that sometimes continue to spawn and invade your screen. You get additional bonus points for finishing with plenty of time leftover, and also for finding hidden items around the screen (usually inside blocks). Solomon’s Key, as a result, develops into what I consider to be a three form arcade game. The first form is merely trying to figure out how to win: fifty levels can take a fair amount of time, even if some are quite short. The second level is then figuring out where all the secrets are and where the items might be tucked away, so that you can maximize the score. The third and final idea is to get it all down to a science, to become so well versed in the game that you can burn through it in record time, but that really only exists for the faithful and those who are determined to hold a record in something. Most of us trying the game will be more than happy stopping at stage two.

To be honest, Solomon’s Key is one of those rare arcade games where the port that many people are familiar with is only slightly different than the arcade version. When you look at the original release of things like Bad Dudes, Contra or even Donkey Kong 3, there’s a distinction in graphics and soundtrack, giving a clear edge to the arcade versions. With Solomon’s Key, a side-by-side shows that the spites are maybe a little more simplified, and the backgrounds are static instead of colorful, but this is a pretty straightforward version. There’s nothing terribly majestic about how the arcade version looks other than, again, maybe a little more color and the soundtrack being a little crisper. This feels like it should be a good thing, since fans are more accustomed to the NES version, but I was almost a bit let down by this. I wanted something newer and surprising to make me say “Oh, so that’s the original!” It’s not a terrible thing, but it does dilute the experience. 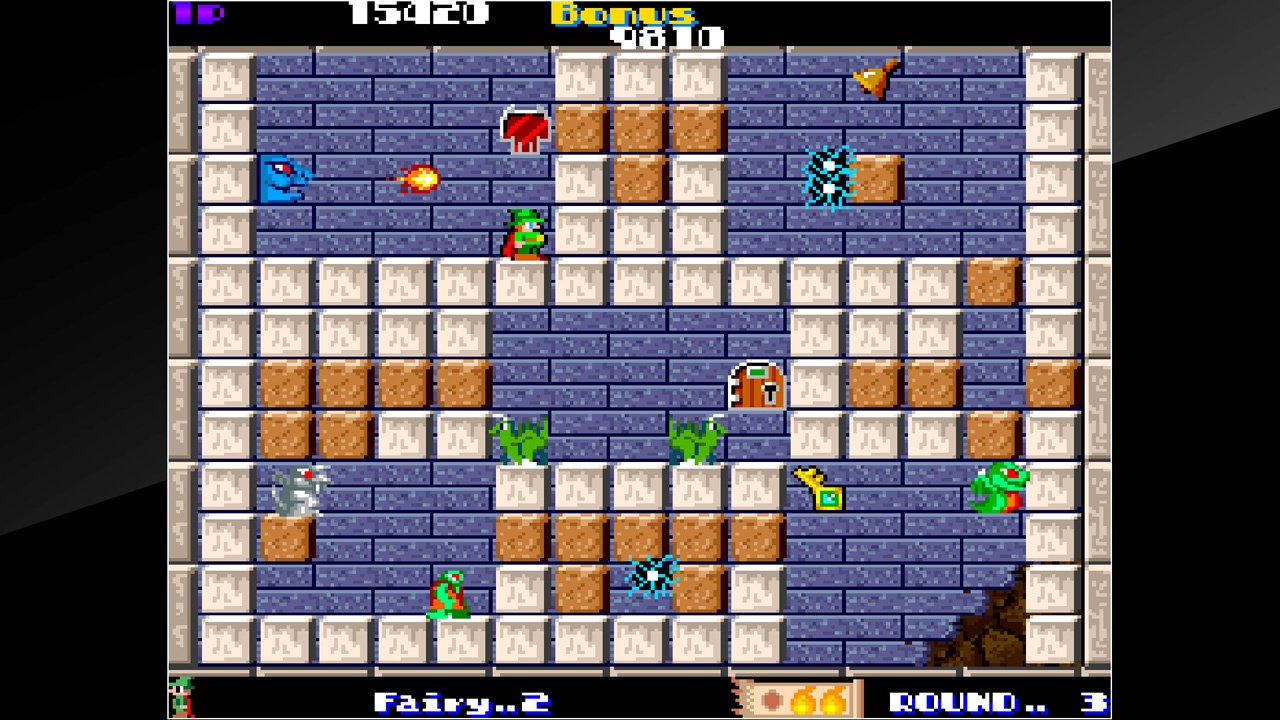 Still, gameplay is as you’d imagine, and Solomon’s Key encourages you to make mistakes and find out more about how and why to play. Figure out, early on, that there isn’t any fall damage, so making complex pathways with quick escape routes can be key to survival. Realize that enemies respawning is way more dangerous than just finding ways to trap them somewhere, and figure out the right place and time for that. Discover that rapidly creating and destroying bricks gives you a temporary “hover” sort of ability that can be the difference between life and death if enemies are a bit too close for comfort. Then, when it’s all said and done, approach each stage with your fingers loose and your mind clear. The last thing you want to do is get one room mixed up with another, think you’re safe if you pass by one spot and then find hell coming down on you. It’s surprisingly engaging, and you get into a good rhythm of muscle memory.

The Arcade Archives: Solomon’s Key game has been a good spot of fun, and should sit in nicely with fans who have fond memories of any of the original versions. With things like the online leaderboards and speed competitions, the Switch port will play nicely into the hands of the small but strong community of retro enthusiasts who continue to expand and challenge each other in the infrastructure that these games have created. If you’ve got any love for the old school puzzlers, either from firsthand experience or watching others play, now is the time to put on your wizard hat and robe and prove that you truly are the Greatest Sorcerer.

Solomon’s Key is still an iconic game of the 1980s, and, simplicity aside, stands well in this arcade version of the classic puzzler.