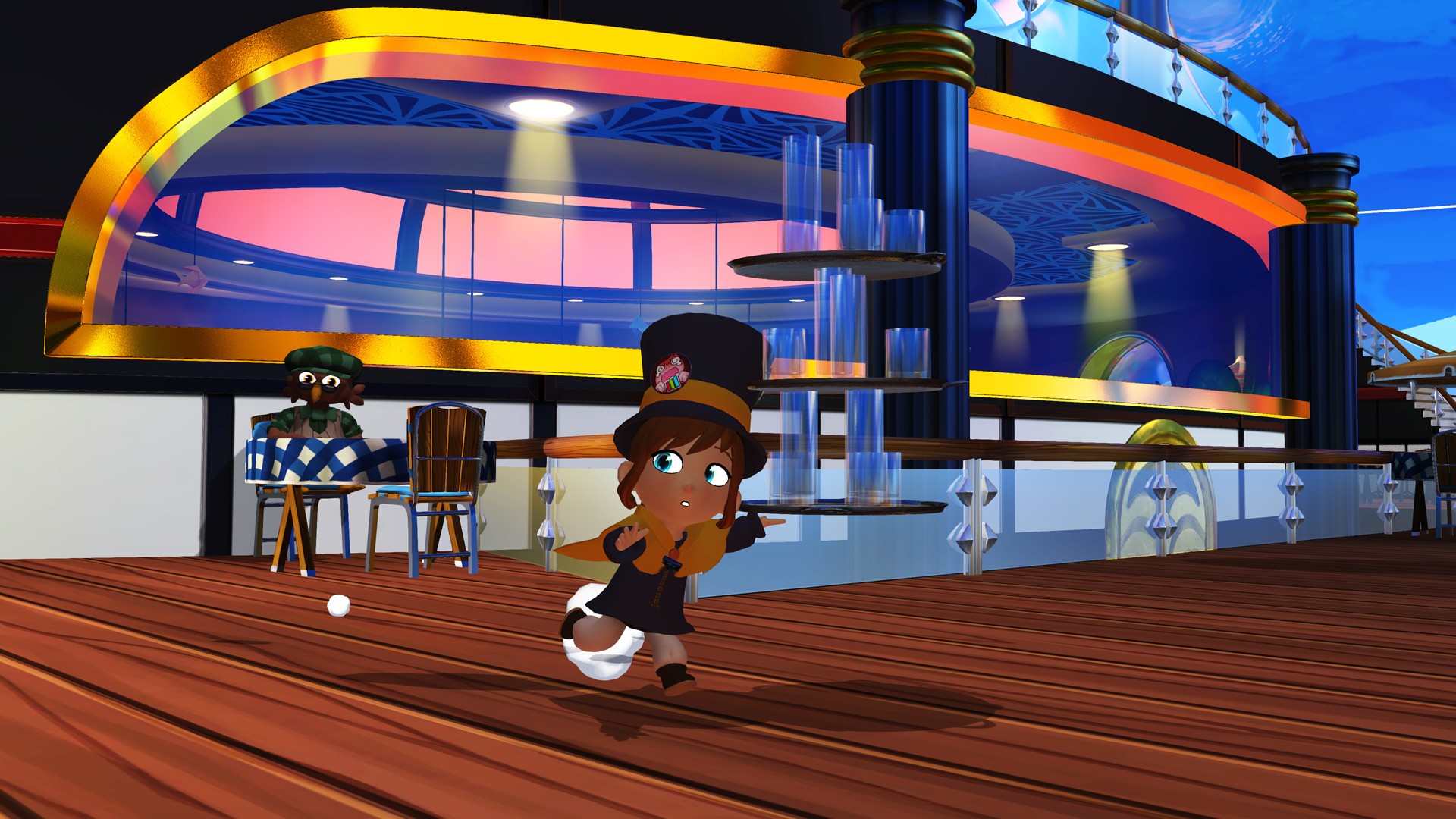 Obviously, this applies more to the Nintendo family of game consoles but there’s no doubting the success of the Mario franchise within a variety of gaming genres. From Karting to 2D platforming and the more recent 3D lands and open worlds, it’s a formula that many have tried to replicate on a number of various platforms. Whereby some have produced a very playable game, the majority have fallen by the wayside, but it can’t be argued that none of them have ever really captured the same level of pure playability and charm as Nintendo’s flagship character. However, there is one game that has managed to replicate the ingredients of classic platforming perfectly as A Hat in Time jumps a release onto the Nintendo Switch.

Developed by Gears for Breakfast, with publishing through Humble Bundle, this game was originally sketched for release on the now defunct, Wii U, before seeing previous releases on the PC, Xbox One and PS4 platforms. It seen some success on these consoles, rivalling the playability of Nintendo classics such as Super Mario 64, Super Mario Sunshine and Super Mario Galaxies. Seeing its release on a Nintendo console is whole different prospect though, but largely thanks to a number of elements that comprise the core of the game, it’s safe to say that this is a Mario clone that holds enough weight to safely stand on its own within the house of Mario.

The game follows the adventures of Hat Kid, a young girl who is travelling through the universe to return to her home planet. With her fuel reserves at maximum, she embarks on her return voyage, safe in the knowledge that she has enough fuel for the journey. However, as she passes by a planet controlled by a Mafia corporation, they demand payment for passing through their airspace. After refusing to bow to their demands, the Mafia representative duly smashes the window of Hat Kid’s spacecraft; sucking everything within into the void of space, as well as her precious stock of fuel reserves which scatter across the four corners of the Mafia’s globe. It’s now up to you to explore the regions of the planet, collecting your vital resources before heading back to continue you journey home. 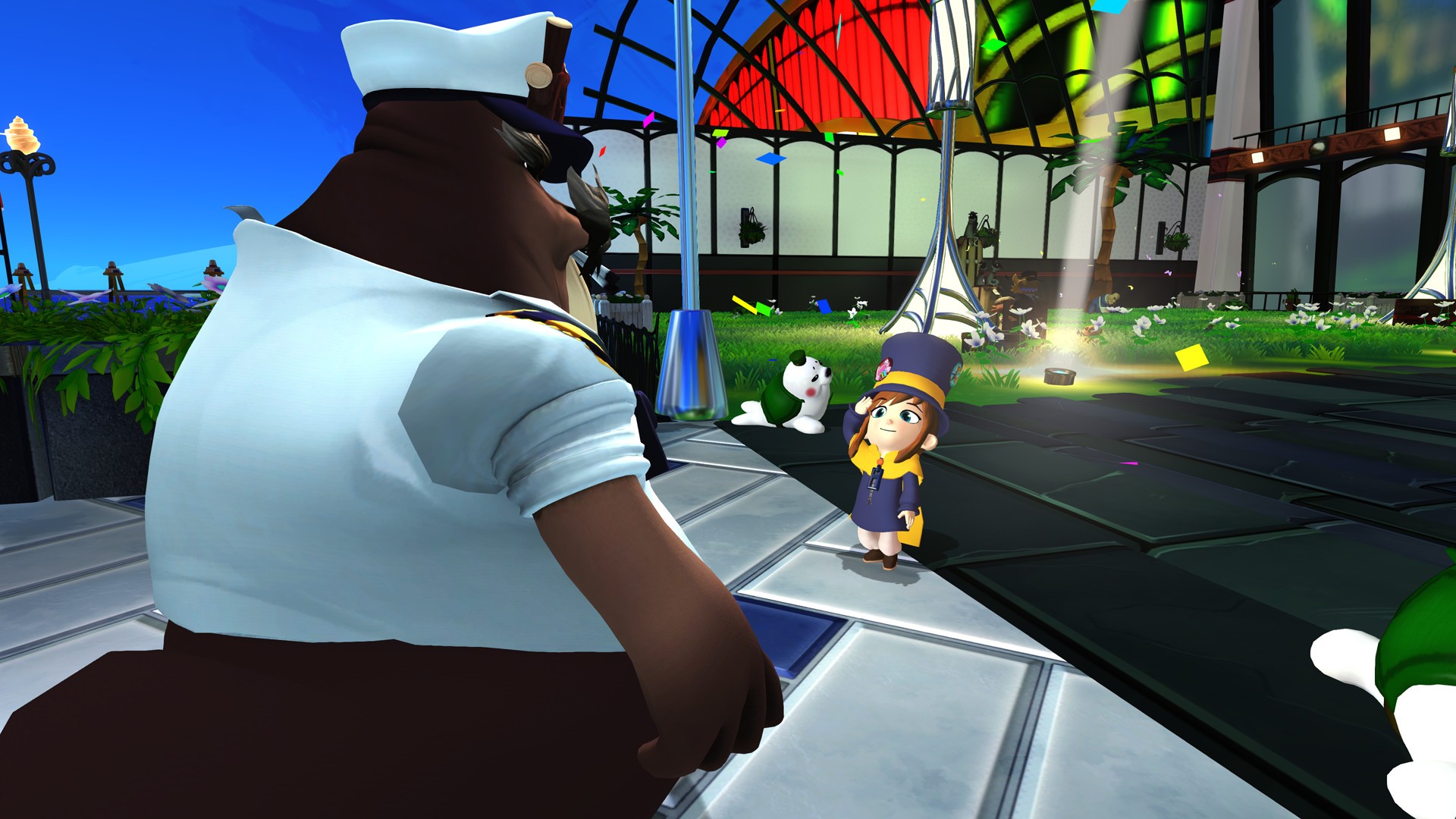 There’s enough of a story to warrant an investment into its gameplay, as well as a huge amount of charm that forces you to explore every nook and cranny of the four regions which you get to explore within the planet. There’s an instant familiarity about the whole set up, from the charming and colourful visuals, to the tight controls and jumping mechanics of its platforming premise. If you’re familiar with the variety of Mario’s past escapades, then you’ll take to A Hat in Time like a fish to water. You have a variety of moves at your disposal, from double-jumps, tight-rope walking and wall jumping to arming yourself with an umbrella to dispatch a variety of enemy types and the ability to home in your objective should you find yourself lost. However, there are a variety of other elements that come into play to bolster your arsenal of moves and abilities.

Throughout the game there are an abundance of collectibles from the main task of finding your lost time pieces, or fuel for your rocket, to gems that act as a form of currency for the purchase of abilities, or tokens that can inserted into a slot machine style of mini-game to win prizes to the lost relics that reveal extra levels in the form of Time Rifts. However, the biggest of them all comes in the discovery of balls of yarn which, when enough have been found, can be used in the manufacture of new hats for your character; each one boasting a new skill set to help our hapless hero. These add extra abilities such as the Winged Visor that allows you to run faster, or the Witches Hat that grants you the power of throwing potions that explode. The more hats you create, the more you can do around the world; each one being easily accessible through a radial menu that allows you to switch in and out with relative ease.

Each of the levels present a variety of locations and freedom amongst their 3D platforming areas. In fact, there’s a fantastic variety to many of the game’s components from the scare-feast, Halloween themed, Hide-and-Seek gameplay of the Spooky Forest to a runaway train that hurtles down the track within a dusty desert. The boss battles too, contain a staggering amount of variation within their levels, creating a game that constantly changes and evolves to produce a unique style that invests you in its ever-changing style of play. It’s here where the main level of investment comes into play. Exploring each region is addictive and great fun in itself and contains so much, that you’ll easily miss things and make new discoveries, but it’s the unravelling of the next unique level-design, boss battle or level task that produces a smile to keep you playing.

Its level of playability is fully complemented by a pristine level of presentation through its graphical style and audio qualities. There’s a massive amount of humour throughout, with a host of cutscenes, lovable characters and gameplay variations that produce many laugh-out-loud moments and elements that simply ooze with pure charm. There’s a high level of voice work throughout, with real emotive values and a soundtrack that is head-hummingly addictive as you play and matches each of the scenarios that you find yourself within, from the excitement of a boss battle to the eeriness of the Spooky Forest. It also contains a perfect balance in its difficulty, making this a game that will appeal to all age ranges and offers enough challenge for gamers of all ability. 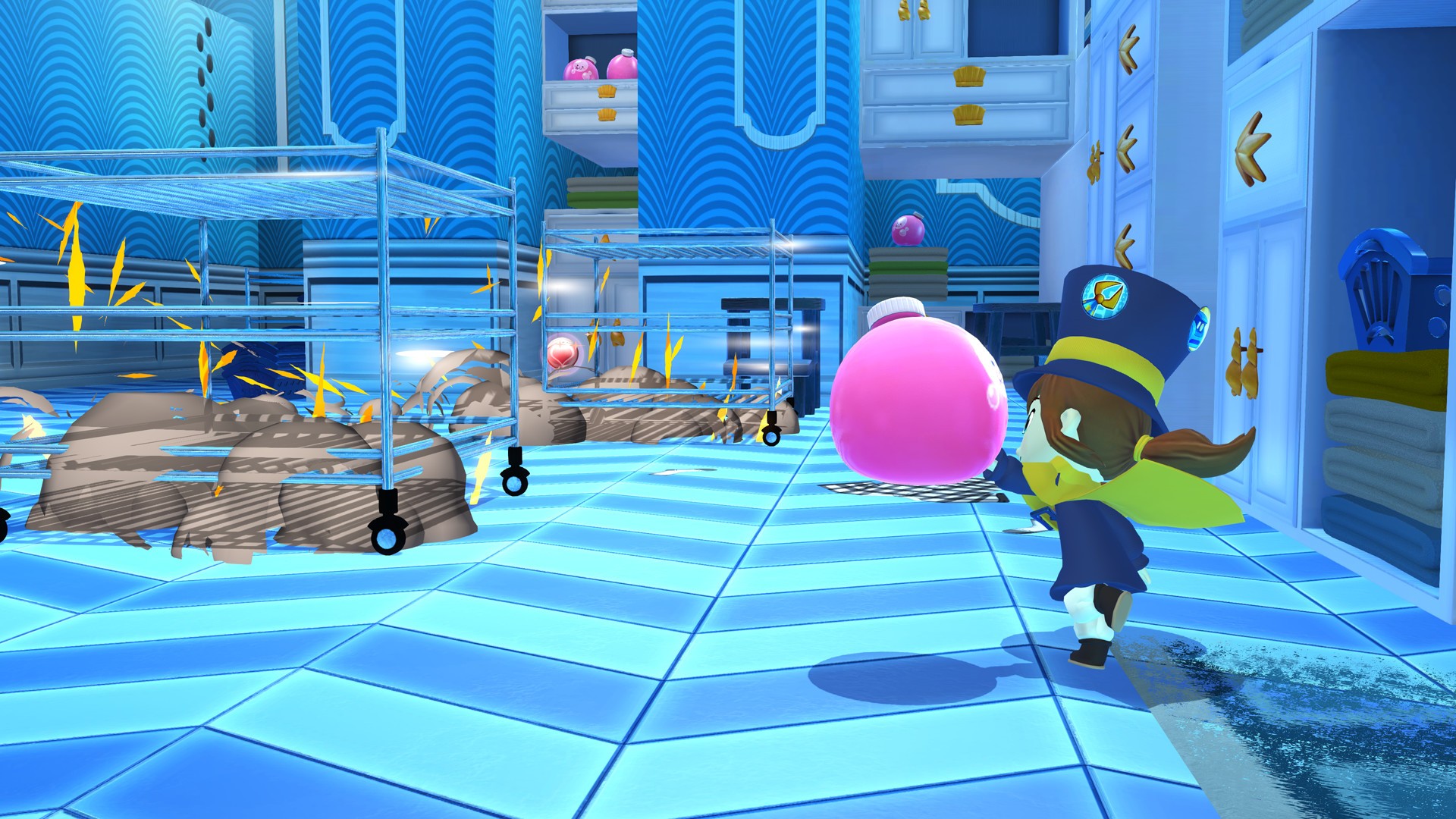 Upon release, there is also an extra amount of content available with the Seal the Deal DLC. This adds an extra chapter to the game, its setting taking place on board a cruise ship within the environment of an icy tundra. It’s one of the standout levels within the game, with an interesting location to explore, although it is considerably smaller in size and scale compared to the main game’s level designs. This DLC also comes with a ‘Death Wish’ option that allows you to play a variety of levels from the core game, but adds a touch of difficulty with a few new twists to bolster the challenge. If you’re looking to add more to the base game, then this DLC does provide some interesting additions to prolong the fifteen hour or so playthrough of the main campaign.

Despite all of its charms, playability and general level of fun, the game does, unfortunately, come with a series of performance issues that don’t necessarily break the game, but can add some frustrations to the overall gameplay. A minor gripe can be had with the positioning of the camera throughout certain segments of the game, especially in the more confined areas of some levels. It’s not that it’s particularly bad, but you can’t help but notice on a number of occasions that its placing is less than ideal; especially within the confines of the DLC level. Its biggest issue though, comes in the performance of its frame rate. Again, it only rears its ugly head at certain stages within the game and is by no means a constant problem, but again, it happens far too much to go unnoticeable and can at times, hamper your ability to play the game as the game begins to stutter at a crucial jumping time or enemy encounter.

Overall though, A Hat in Time is a solid Mario-clone in the genre of 3D platforming games. It holds enough content, charm and playability to be able to stand on its own; although it also has to be said that it doesn’t quite reach the lofty heights of Mario’s level of gameplay, but it’s pretty darn close. There’s never a dull moment with some interesting locales that beg to be explored, a whole host of fun boss fights and more collectibles than you can shake a stick at, well, an umbrella really. Its crowning jewel though, comes with the fact that you can play this in local co-op too, as well as extend its play-time with the Seal the Deal DLC that adds some interesting elements to the base game. If you’re a fan of 3D platformers or the Mario games of yesteryear, heck even Odyssey with the hat changing mechanic, then you’ll find plenty within this package to fall in love with and if you’ve never, ever sampled the delights of a Mario game, then why not try this one out for starters, after all, it’s definitely worth taking your hat off for.

A Hat in Time - Seal the Deal Review

A Hat in Time is a 3D platformer that is inspired by and encapsulates the charm of a certain moustached plumber and is a game worth taking your hat off for.