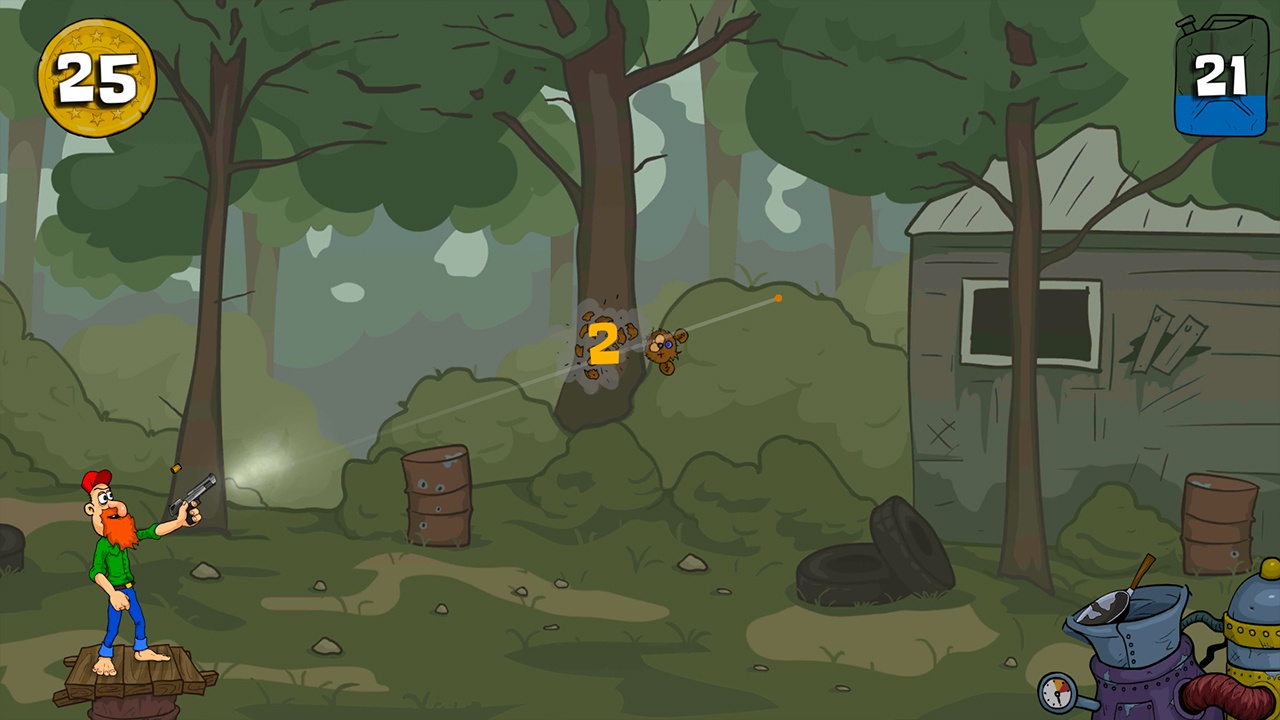 I try to be open minded about every game that comes my way. As much as we all want to pretend there’s nothing but top caliber titles on the Nintendo Switch, the inclusion of the touchscreen, the portability, and the massively expanding market for casual and younger players makes it a prime target for more simplistic and sometimes low effort games. That’s sincerely not a bad thing in many cases. There are some truly great mobile games that’ve come over to the Switch, as well as PC ports from lesser known developers, and it expands our reach in great and far distances. I earnestly enjoyed my time with titles like Bloons 5, King Oddball and Severed (the last being more of a 3DS port, but you get the theme). Yet, when there’s a game that just feels objectively bad and wasteful, it’s hard not to come down on it with my full weight. That’s sadly the case for Redneck Skeet Shooting, which smug players will probably say you can tell from the game’s title.

The game has zero plot or story, so don’t bother trying to piece together one. You play a dude named Bill (with some unlockable costumes to make Bill more effective), and it looks like you’ve built something that acts like a wood chipper without the chipping. Bill wants to shoot stuff in his backyard, so he’s loaded up the machine with whatever is handy around the yard: bird houses, teddy bears, frying pans, chickens, etc. Those items come flying out of the machines, and Bill shoots them to shreds. This is the long and the short of the game, with the added bonus that, over time, you can unlock new areas to go shooting (the Supermarket Parking Lot, for instance) and new, more high powered weapons to blast everything to smithereens. You aren’t going to find bosses or some kind of deep, mystical lore within this game. Just bigger guns, more difficult stuff to shoot, and better rewards. 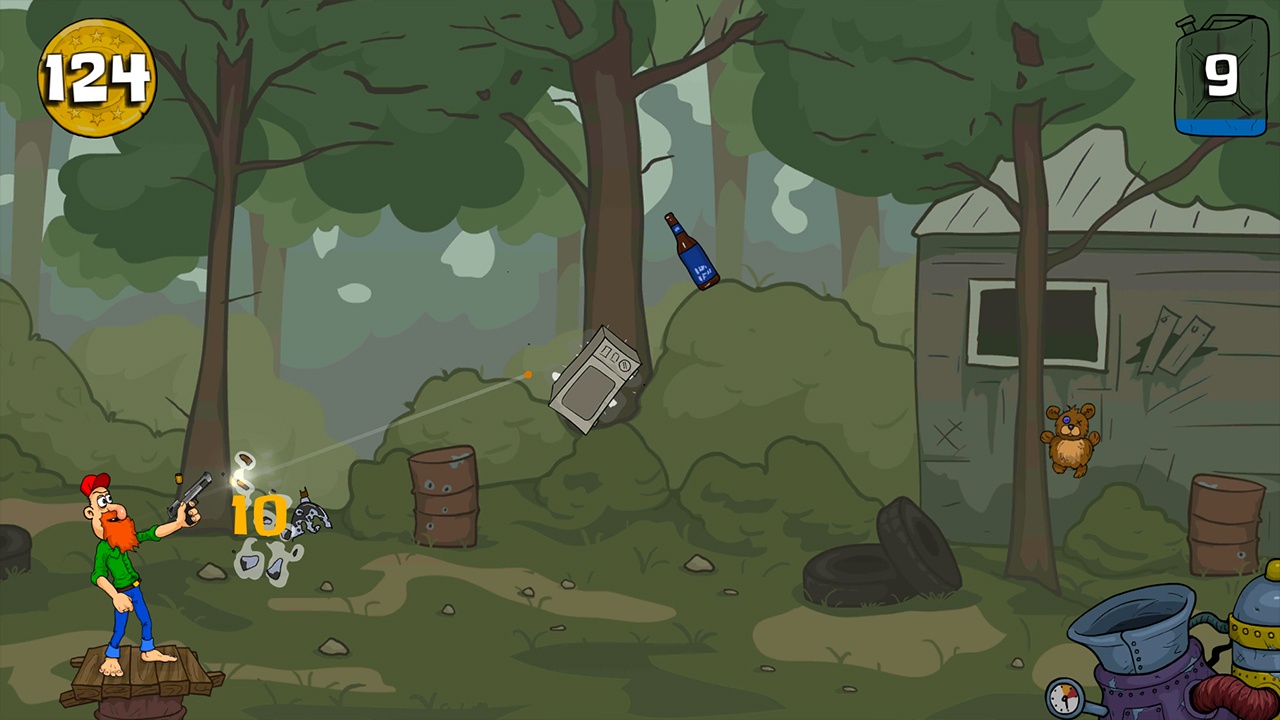 As you shoot everything in Redneck Skeet Shooting, you get coins to pay for the unlocks. To the game’s credit, there’s a decent amount of replay in that sense if you’re a completionist. You’ve got several guns to choose from after you unlock them all, from the simple Sloth 19 pistol all the way up to a Soviet-inspired Kuznetsov Rifle, and the rate of fire and kickback increases with each iteration. Starting in the backyard, you gradually make your way out of your backyard, across a rural who’s who of target ranges (including the strangely misspelt “Dark Forrest”) and ending in someone’s Mansion who clearly doesn’t want you there. In total, there’s not a massive amount to unlock, but there’s enough and the dev team of Mad Gamesmith promises, in game, that new everything will be coming soon. That’s probably contingent on the game selling well, so, tragically, don’t hold your breath on the game getting bigger.

This is because Redneck Skeet Shooting is a terrific bore when it comes to playing. The controls are wonky as hell: there’s just one button to shoot (not that you would know due to a lack of options in the game menu), and you can aim up and…that’s it. Your shooting arm naturally drifts down when you’re not holding up, so you don’t even have full control of where you’re trying to unleash your unlimited ammunition. In theory, you can do cool things like get a coin bonus of a multi-shot, or have items collide with each other in midair, but it takes a long, long time to really understand the downward fatigue that comes with aiming. You need to learn how to lead the objects for a significantly longer time than most other shooting games made in the last twenty years or so, and it doesn’t always feel satisfactory. But that’s alright, because you’ll have a lot of time to practice if you want to get better, as the payout from getting successful shots is absolute trash. 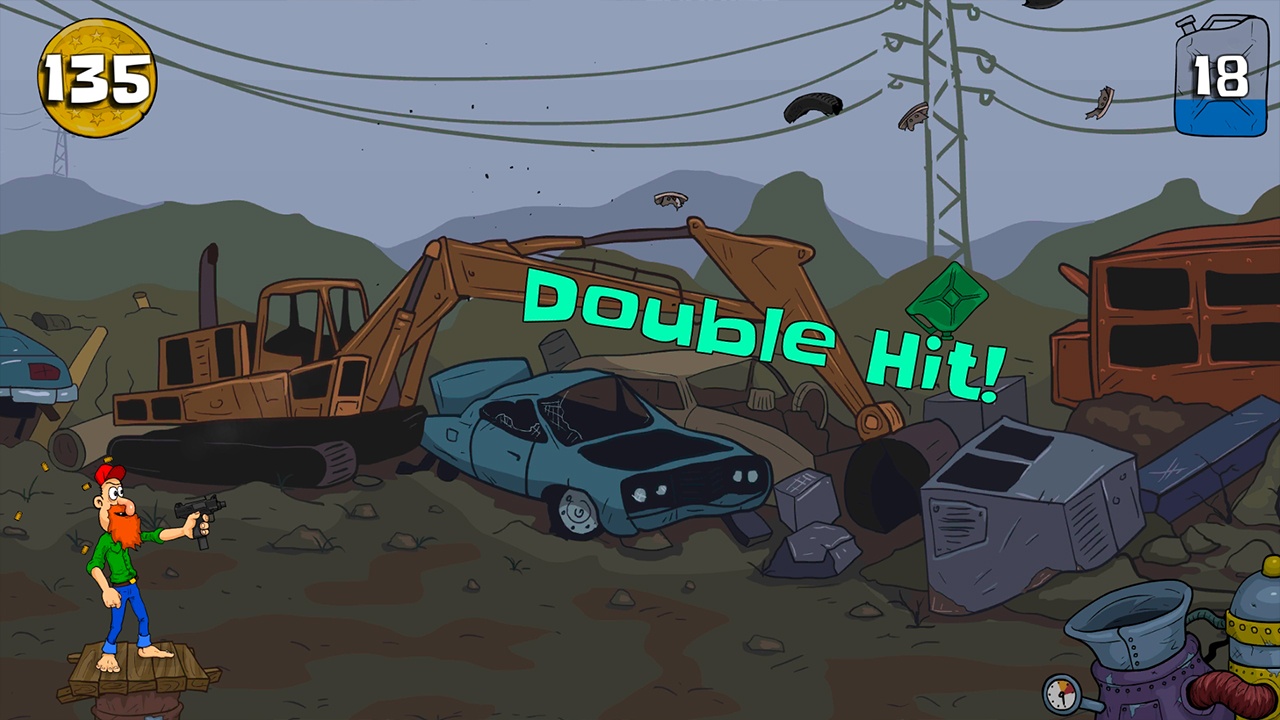 Unlocking the first couple of whatevers (either a new weapon or a new area) requires getting coins that are somewhere in the thousand range. For the highest object that you get from the first level, you might be able to get fifty coins. That’s the best case scenario for when the machine arbitrarily generates the right item and you’re happy and it doesn’t seem like a hopeless slog. However, most of the time you get things like the teddy bears (2 frigging coins) or the bird houses (ten coins). And you can’t just shoot in an endless rate, either. Anywhere from four to ten items in (it really seemed arbitrary), you’ll see a pack of dynamite fly out of the machine, and shooting that ends the current run and you get to see the massive number of coins you got in that setting. Then you can either go to the trophy room (literally just a showcase of all the guns you have and all the items you’ve found in the areas) or restart and shoot again. Missing an item doesn’t afford a penalty. Getting a combo shot gives you a bit more in the coin department, but not enough to make it worthwhile. Finding every trophy in each level is cool and all, but Jesus Christ does it take a while.

After you get the first couple of upgrades, Redneck Skeet Shooting becomes a better affair, but the magic dies almost instantly. You’re just a dude in a trucker cap and overalls, shooting bottles and squirrels and whatever else comes out of your machine, and the controls positively suck. There are no touchscreen controls, so there isn’t even like a cool mobile feel to the thing: it’s just button after button with that weird dragging sensation every time you need to shoot. All the time you spend figuring out how to shoot with the pistol goes out the window once you get the “Uzzy” (Uzi) and I can’t even believe that I put so much time into a game that’s boring, repetitive, difficult due to creation and not design, and ends quickly compared to what you need to do initially. The only real saving grace is that it’s only five bucks, and the likelihood that this’ll become one of those infamous “90% off” sale items is crazy high, meaning, if you’re morbidly curious, you’ll probably be able to get it for under a dollar within five months. Seriously, though, unless you are dead set on completing your “Redneck games on the Switch” collection, don’t grab this game.

Harder to enjoy than a Lynyrd Skynyrd cover band and without the possibility of Freebird, this simple arcade shooter is one for the swamp, not the Switch.