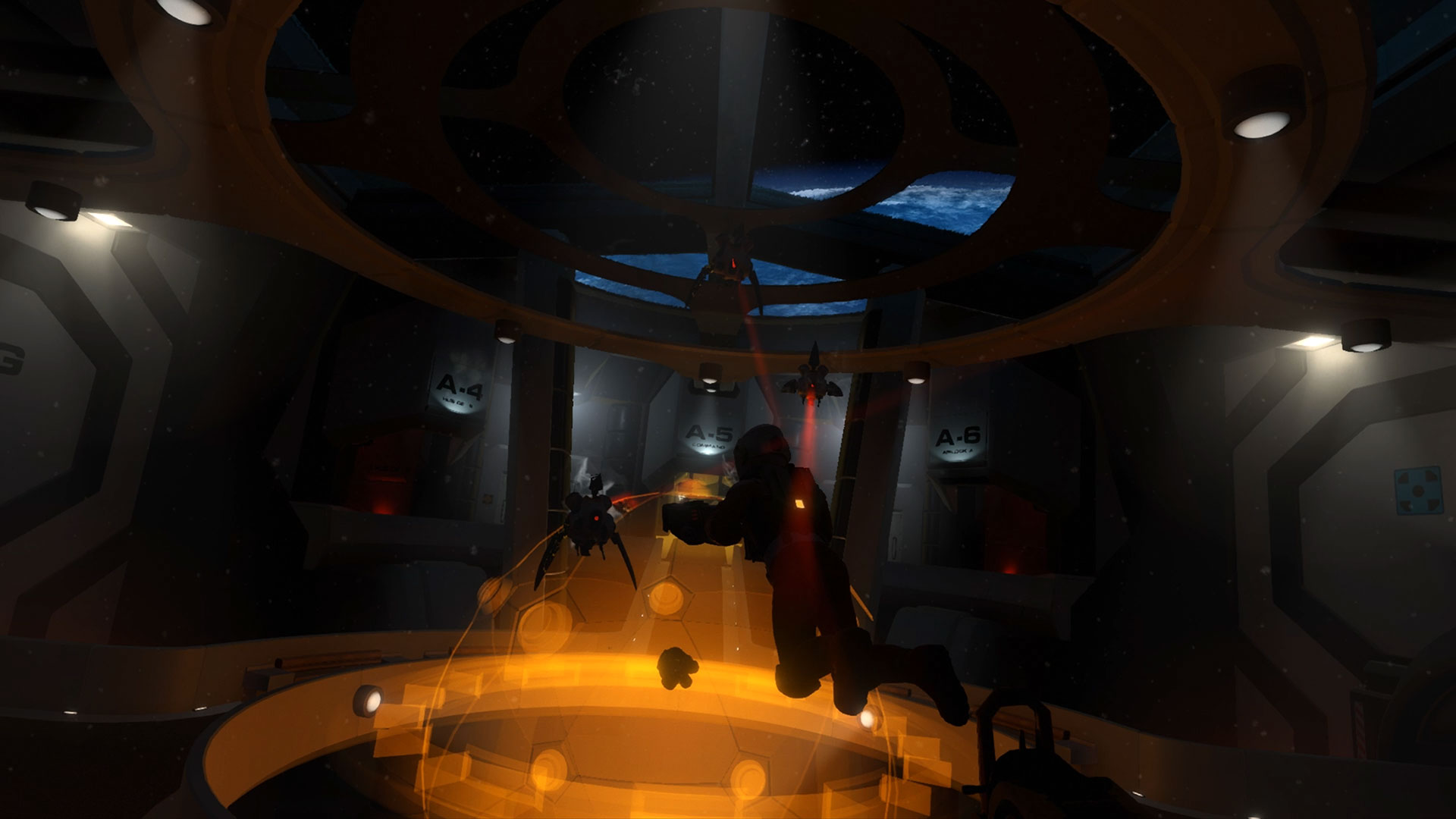 Disclaimer: This review is based on the 2D experience, not PSVR.

Downward Spiral: Horus Station is an FPS action/adventure game that thrusts you into the dark and mysterious ambience of the abandoned Horus Station that is floating around in space. I dived into Downward Spiral relatively blind, aside from reading a quick synopsis on PSN and glancing over a few screenshots online. The game boasts, “A story that’s discovered, not told,” with a focus on heavy environmental storytelling and no dialogue or cinematics. This piqued my interest because I actively seek games with heavy narratives, and hold story over gameplay, graphics, and the like.

What started as a great experience ended with frustration and a few rage quits.

The title screen opens to a vast desert landscape with sandstone structures reminiscent of a dilapidated Stonehenge. Had I not read a synopsis online, I never would have initially thought that the game took place in space, or the barren landscapes of Mars. The opening menu isn’t very sophisticated and there are options for single and co-op campaigns with the choice to play in a survival or peaceful mode. Out of three different difficulties, I chose the Standard setting in survival mode so I could still feel challenged, but also enjoy the atmosphere of the game.

Had I been using a PSVR set, the opening of the game would have thrust me into the lonely ambiance of space. But, because it was played in 2D, that experience was lost on me.

Downward Spiral is completely in zero gravity, and it gets frustrating. The game starts with our unnamed protagonist in a small chamber. In the standard 2D version of the game, you are instructed to use L3 to push yourself along the walls and railings in order to traverse the Horus Station. However, the game doesn’t tell you that you can also use L2 to grab onto railing. There is definitely a learning curve before mastering the basic movement mechanics. It took me at least 20 minutes to learn how to move around, but I still struggled once I made my way to an open area. 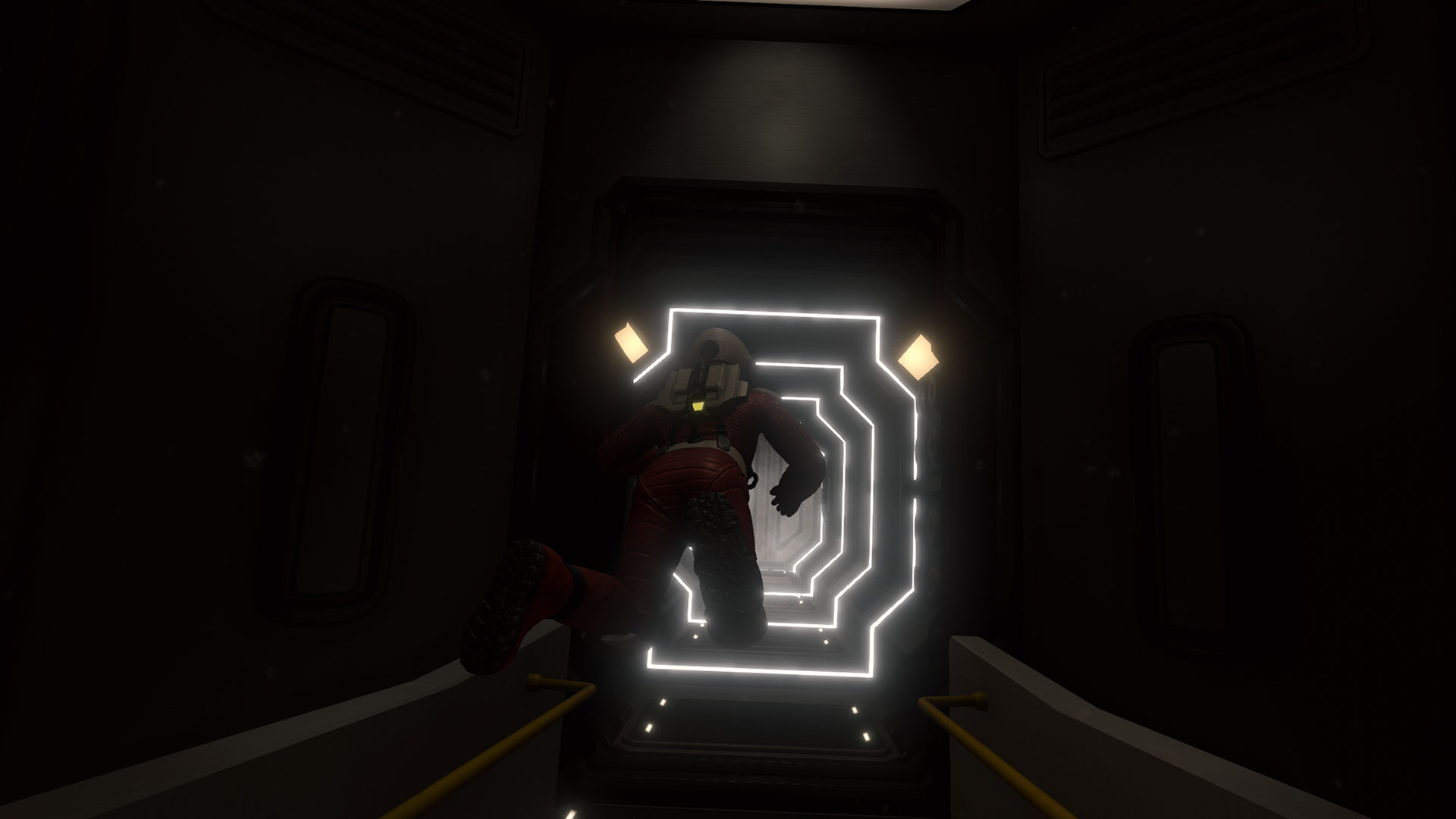 Spending way too much time to admit in learning how to travel from Point A to Point B took me away from enjoying the game to its full capacity. Eventually, you find a grappling hook-type gun that lets you quickly zip from wall to wall. Though moving about each area took less work, it didn’t make traveling any faster than if you were to randomly bump wall-to-wall (like how the game first started).

Downward Spiral has very rudimentary objectives: you spawn in a small chamber and you have to unlock doors to reboot power at specific locations within the abandoned Horus Station. Sounds pretty simple, but it is anything but. I had so many problems trying to move around in the game that it took forever to accomplish any of my goals—“goals”, really meaning “open doors, rinse, and repeat.” The environment is dark and mysterious enough to want to explore each and every nook and cranny of the Station, but for a game that boasts a discovered storyline, turns out I couldn’t find anything of importance.

Throughout your exploration of Horus Station, you find different types of weapons that are unique to fighting different types of hostile robots with differing styles like ranged and melee fighting techniques. I will hand it to 3rd Eye Studios that they made a fun arrangement of weapons designed to destroy each type of robot.

The game does struggle with its levels of difficulty. Standard difficulty is way too hard—after three hits from one of the hostile robots, you instantly die. There are med kit areas around the Station, but you never need them when you come across them. I tried changing the difficulty in the settings menu, but adjusting difficulty wasn’t an option, so I had to start a new game file on Easy. This drew me back quite a bit and I started to get fed up and frustrated even more trying to catch up to my old save file. 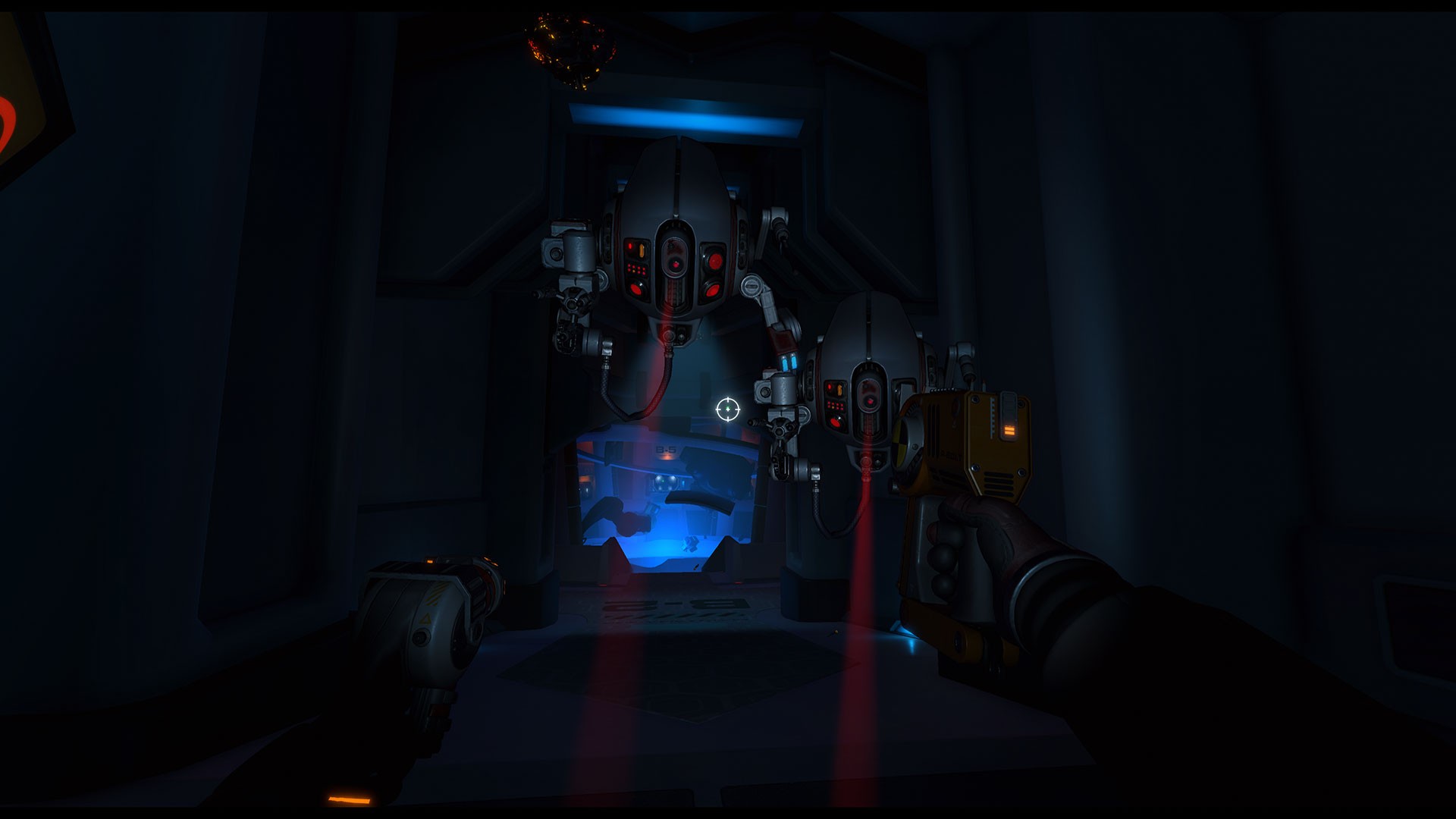 Despite the game’s focus on environmental storytelling, I was laser-focused on accomplishing my tasks but struggling with basic movement took away from the whole immersive experience. I could see how the game would have played much better in PSVR, but it doesn’t stand a chance on its own as a standard 2D game. At first, I was impressed with the quality of the graphics and the interior designs of the ship—but, because the game moves so slowly, it got old very quickly. Each area of the ship is also a cut and paste of the previous, and I kept getting lost because there was no real map system to reference. Everything just looked the same.

Taking the game for what it is, Downward Spiral: Horus Station is meant to be played in VR and should stick to being played in VR. However, the game feels void and repetitive that I don’t think playing in VR could salvage the disappointing, boring, and overly complicated gameplay for relatively simple objectives. VR couldn’t have salvaged my overall negative user experience while playing this game.

The 2D version of Downward Spiral also didn’t give many opportunities for replayability because there is no suspense after your first experience. I also couldn’t imagine playing with another person in co-op mode unless it were in VR; however, co-op seems like a wasted addition to the game because there isn’t enough content to warrant co-op: you could choose to fight endless hordes of enemies, but the gameplay is so bland that there’s no attractive way to make it seem fun. I will say that if I had a VR headset, I would give the game another chance. But until then, I am perfectly fine without getting lost in the void of 2D space. The game is a walking simulator with a nonexistent plot but with some adequate combat mechanics.

A walking simulator with a nonexistent plot but with some adequate combat mechanics.