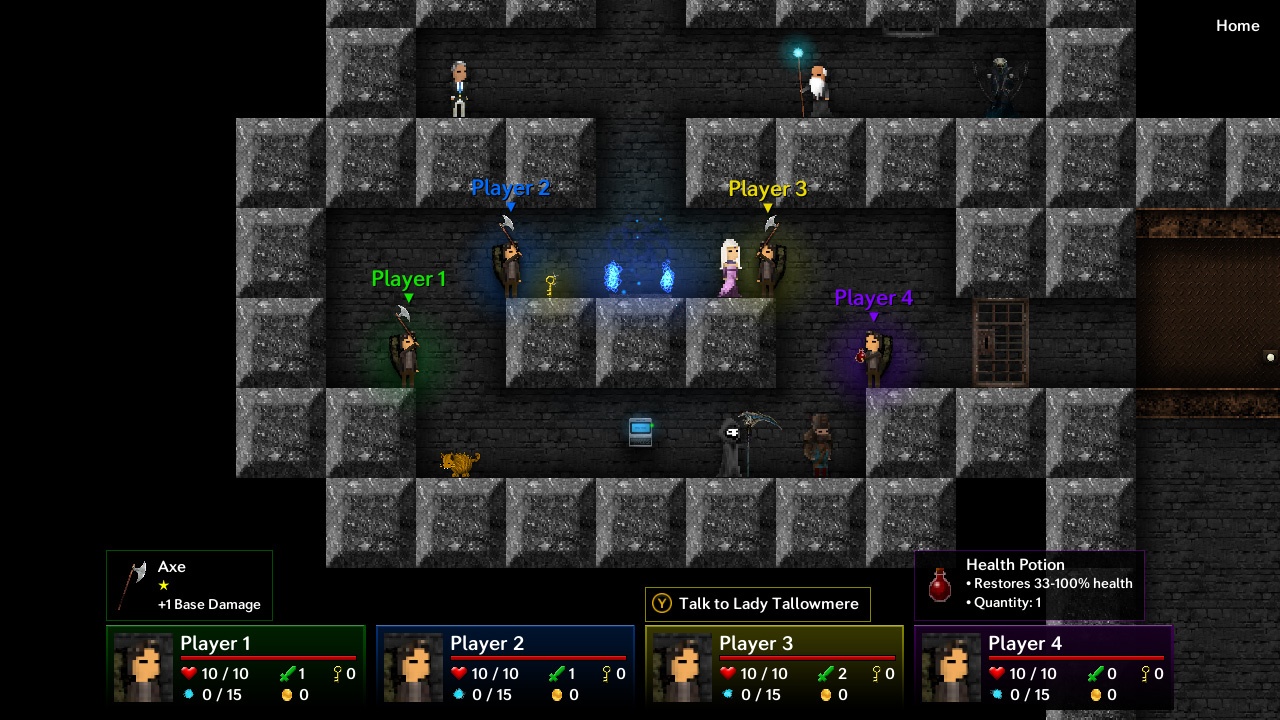 Sometimes people can only do one thing, but they do it really well. No one faulted Michael Jordan for being poor at baseball because, well damn, look at his career. When you heard the Chris Gaines album, you quickly forgave and forgot it because Garth Brooks has done plenty right otherwise (musically). And Chris McFarland does one game: Tallowmere. And he does it a lot. But man, does he do it well.

Tallowmere is as blood simple as you can get with a roguelike dungeon crawler. Lady Tallowmere is a weird chick who loves making hyperviolent dungeons and asking you to go into them and see how far you can go. Full disclaimer: I dunno if there’s an end to these dungeons. But they go quite deep, and quite long, and are very, very roguelike. You start with an axe and a shield, and you really only need to do three things: jump, hit, and raise your shield. Good luck, see how far you can go. Make it 200 rooms or two, Lady Tallowmere doesn’t care, as long as you indulge her obsession.

As a 2D platformer disguised as a dungeon crawler, Tallowmere has a lot of unique points for it right out the gate. For one, I assumed the oldschool pixel art application would mean clunkier controls, and that’s simply not true. My hero moves and zips around pretty fluidly, and the triple jump made for some strong control overall. I mean, don’t get me wrong, the enemies move pretty fast as well, and I’m not a fan of that, but there’s nothing wrong with it. In fact, having these older graphics with newer handling was a breath of fresh air, especially when I realized how stupidly hard this game is. 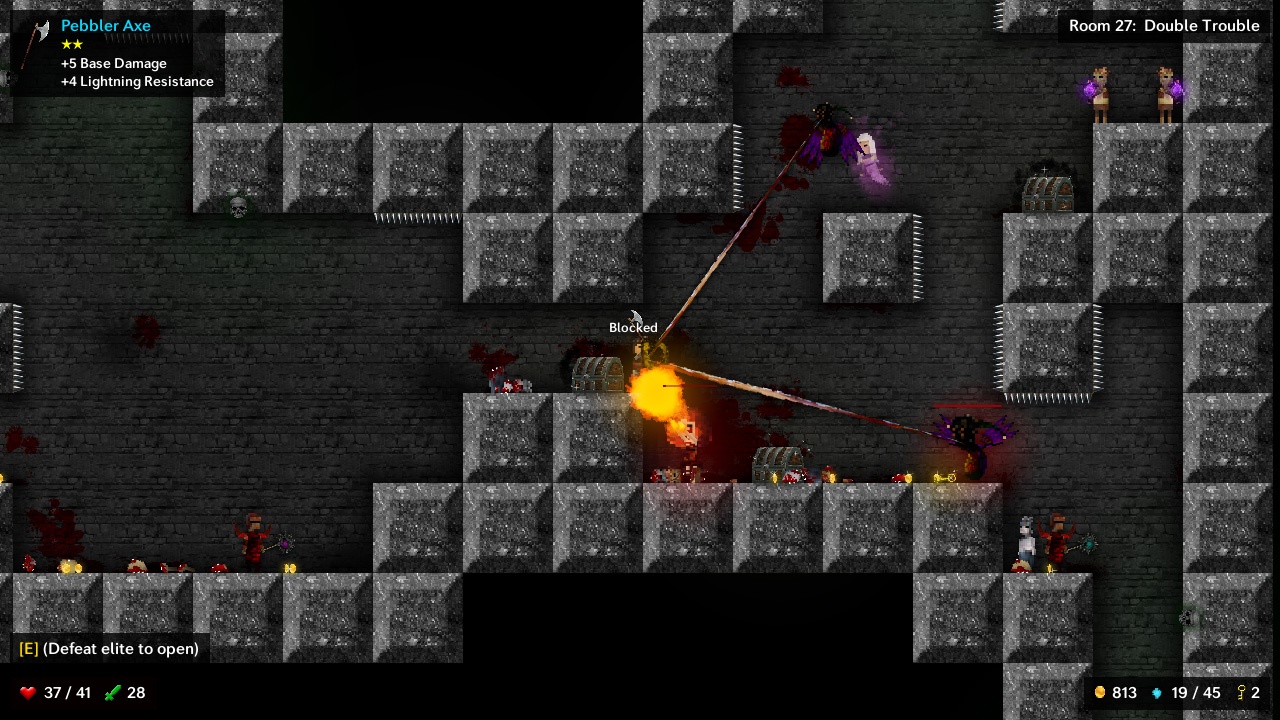 Tallowmere’s purpose is to die. That’s it. You are going to find armor, weapons, upgrades, the best of the best, heal yourself, be a hero, and die horribly at some point. Maybe you’ll run into too many spikes. Maybe an elite enemy will trap you in the corner and mutilate your face. Or maybe you’ll simply misjudge where that projectile is flying and take it right in the stomach. Either way, death is ahead. A lot of roguelites on the Switch promise a little something in terms of trying and trying again. Usually it’s unlocked items, improved skills or at least better knowledge of what can and will happen in the future. Tallowmere only lets you know that your fate is sealed the moment the game loaded up, so good luck, sucker.

You’d think this would make the game unappealing, but having the theoretical ceiling removed is actually quite relaxing. I don’t get mad when I end up impaled before finding a single treasure chest. You know how some people play Solitaire or Candy Crush because there’s not really a purpose? Tallowmere is the masochist’s card game, without the cards.  You’re gonna find insane weapons, like a damn flamethrower, and get a ton of gold to buy stuff once you discover a waypoint. You’ll get decked out from head to toe and sacrifice a bunch of kittens in order to have a health advantage (that’s actually a game mechanic, and there are scoreboard penalties, don’t worry). You’ll turn on every punishment that the Reaper has to offer just to see how far you can get and, when you finally hit your vanishing point, you’ll still get beat to death by something that probably looks like a specter from Hell, and that’ll be it. It’s almost like Tallowmere is unexpectedly offering philosophy lessons in the process, or at least exercises in Buddhism and letting go. 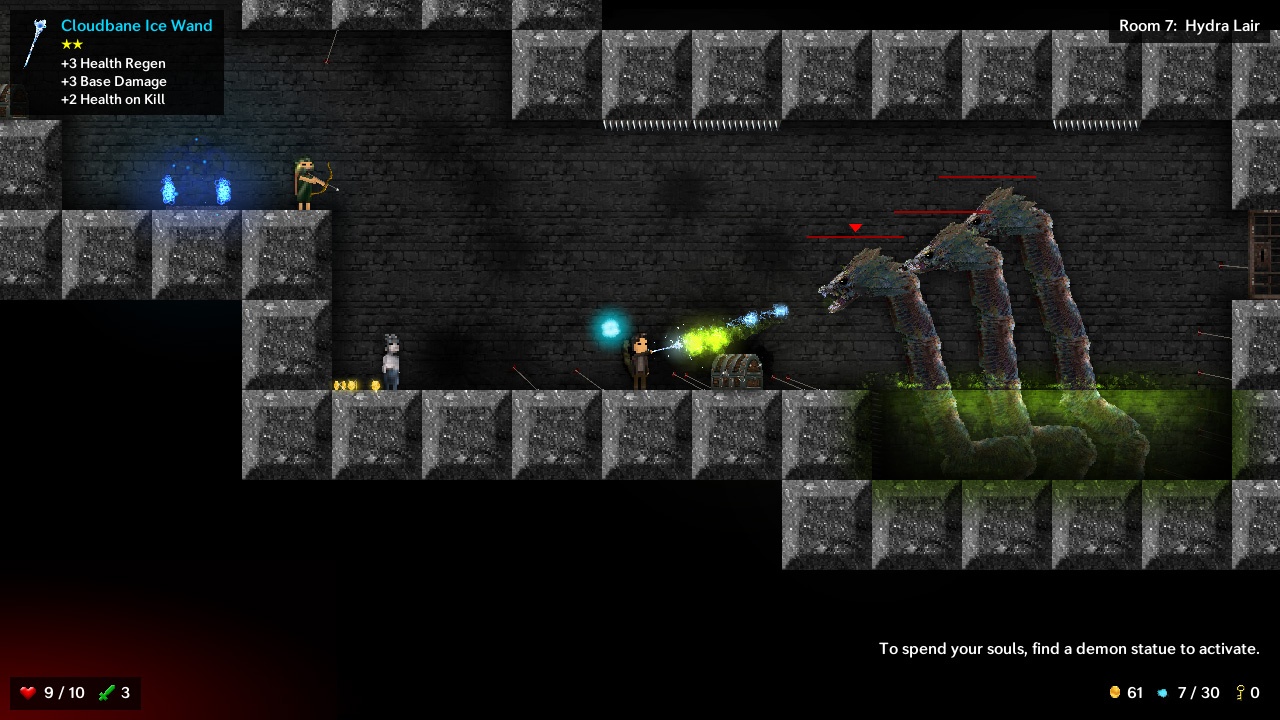 Now, this definitely doesn’t make Tallowmere perfect. For one, roguelike or not, you feel like you’ve seen most of what the game has to offer in about three hours. There are different strength levels to each of the equipment pieces you can find/buy, but the pool isn’t infinite: this isn’t a sprawling collection fest, it’s a tight and simple roguelike. Additionally, the number of times you end up being pinned down and essentially drained of life is a bit infuriating. It’s one thing to die while running into combat or running away, but to get setup either by enemy density or status affliction and not be able to do anything whilst dying kind of sucks. And, if I’m being perfectly honest, there are a lot of roguelikes on the Nintendo Switch at the moment, and more are coming. You really need something gimmicky to hook people and keep them onboard, because indies are coming fast and furious still, and 2018 looks like it’ll be an even bigger year for the Switch.

I do like Tallowmere, don’t get me wrong. I can’t imagine playing this game as a mobile title because the buttons feel super important for swing and shield timing, and a little extra landscape makes more sense on the Switch rather than, say, a tablet. But this isn’t going to be for everyone, and I think Chris McFarland wants to see the interest and reaction from fans, because Tallowmere 2 isn’t that far off. If it comes to the Switch, I think there’ll be a fair number of fans, but I can’t guarantee that comes from sales of the original, especially when it’s been out on other platforms for years. Still, the price is right, and drumming up business in order to ensure the sequel is pretty appealing, so fans of witnessing their own murder may yet find enjoyment therein. I just hope, someday, that Lady Tallowmere’s bloodlust is quenched, because I’m running out of grunts.