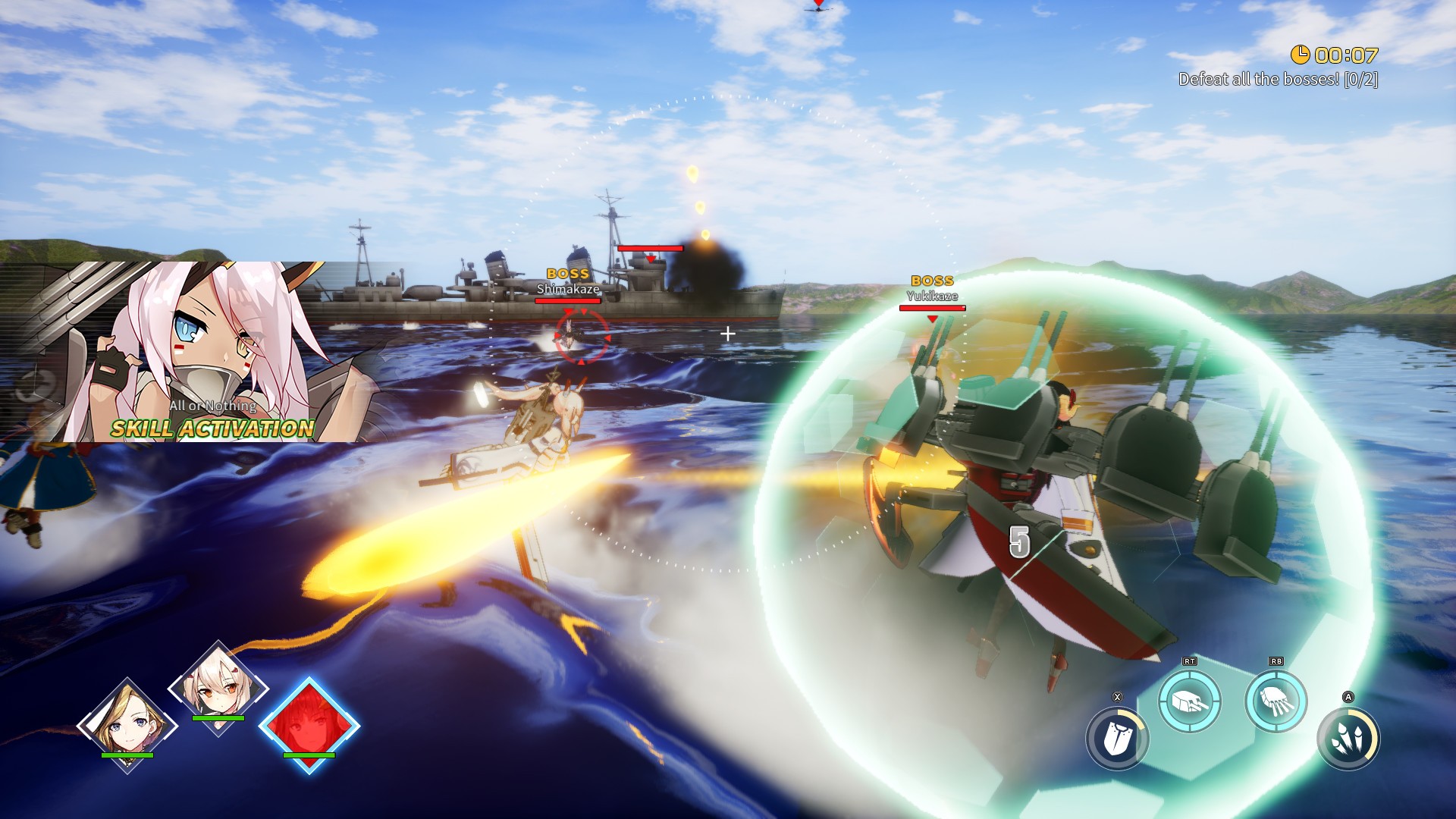 Azur Lane: Crosswave is a new PS4 game created by Idea Factory, Compile Heart and Felistella, based on the popular mobile game. Crosswave serves as a kind of spin-off to the main game, telling an original story and featuring action RPG gameplay in contrast to the mobile game’s side scrolling shoot ‘em up style.

Azur Lane: Crosswave features a lot of story. It all plays out in visual novel format, and it’s the game’s main focus. The story follows a large number of Kansen, anthropomorphic female versions of real life warships that took part in World War 2. Each Kansen belongs to one of the nations involved in the war. These nations are Eagle Union (United States), Royal Navy (United Kingdom), Sakura Empire (Empire of Japan), and Iron Blood (Germany). The characters of the various nations have come together for a tournament of sorts, but things don’t go to plan. There’s a reasonable amount of content here for Azur Lane fans, with the story mode lasting around 8 hours. In addition, the English translation reads clearly and is without errors, which is good to see. One of the highlights is that the game’s story is fully voice acted in Japanese, which really helps to bring it to life. There’s a large cast of Japanese voice actors featured, and they all provide a good performance.

Something that immediately stands out about Azur Lane: Crosswave is that the artwork is very nice, it’s all quite detailed and colourful. Sadly, the character portraits aren’t animated at all, unlike a lot of other modern games. In addition to this, almost all of the character portraits are reused directly from the mobile game. It feels a bit lazy, and would be disappointing for people who have played the mobile game and already seen this artwork many times before. 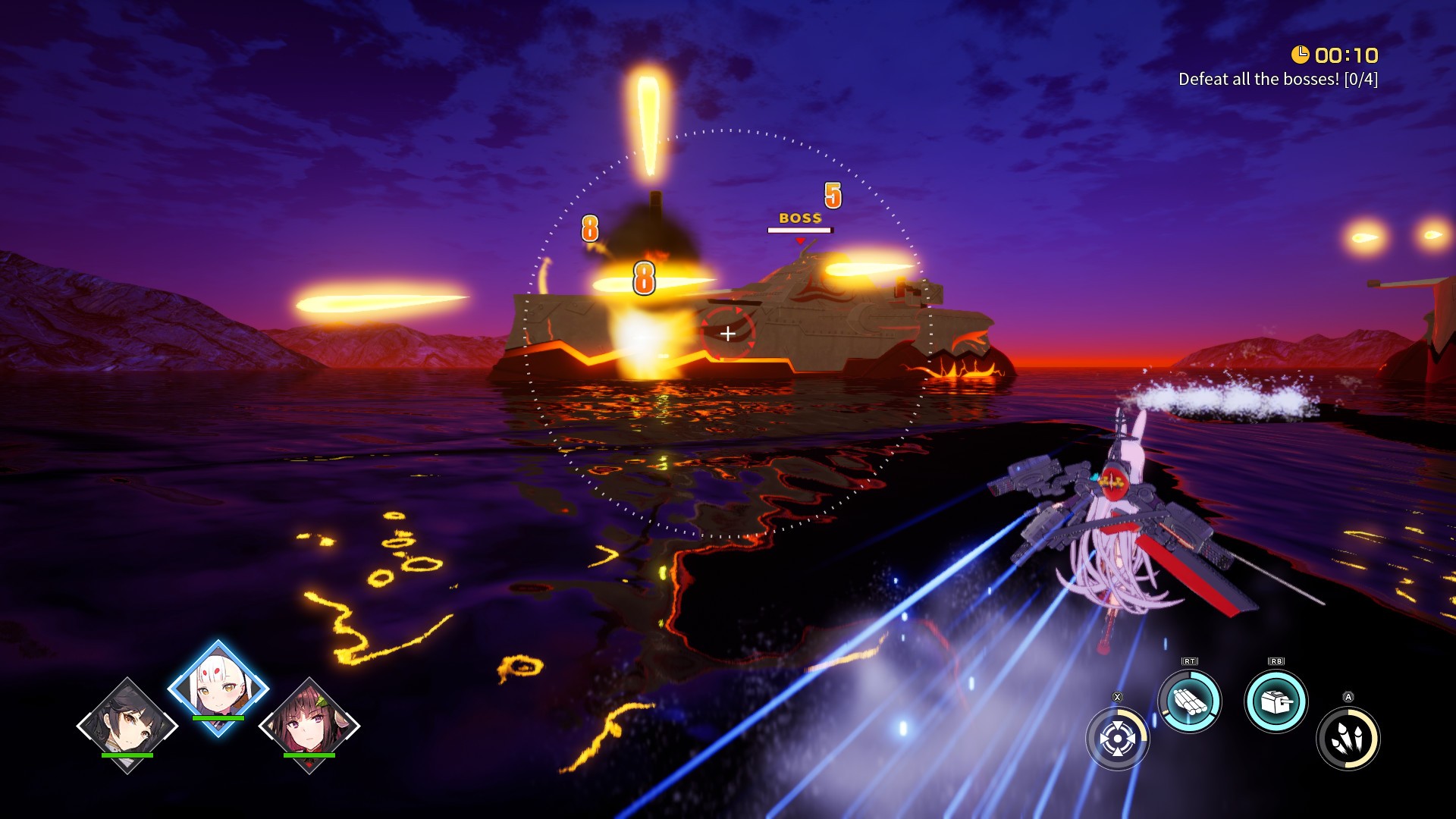 Most of the Azur Lane: Crosswave’s content and running time is found in the visual novel sections that make up the majority of the game. Battles look kinda flashy, but there’s little substance, and the majority of them last less than 2 minutes. After choosing up to three main ships and support ships, you find yourself floating in an ocean environment. You can switch between your main ships using the D-Pad at any time. Players zoom around the ocean and engage other ships in battle, both traditional looking ships and the anthropomorphic ones. New playable characters are unlocked by spending A Points. These points are earned after each battle, and you get larger amounts as you progress through the story. There are 28 playable characters in total, plus one more available as DLC.

To attack enemy ships, players use the controller’s triggers to fire regular attacks, and the X button to fire a special attack. The square button triggers the character’s unique ability, which will power them up. Each of these attacks has a cooldown gauge that stops them from being used again for a short time. Enemies tend to have large amounts of health, and the game strongly encourages you to clear the battles in under 2 minutes to get the best rank. Due to this, a lot of the time you will be looking down towards the bottom of the screen at the cooldown gauges for your attacks, rather than the gameplay itself. As you can imagine, this tends to be distracting. The game could benefit from more strategy, or better placement of the cooldown gauges. All of this soon becomes repetitive. The battles boil down to little more than this: going into a mission and simply spamming all your skills, then keep spamming them for a couple of minutes until you win. 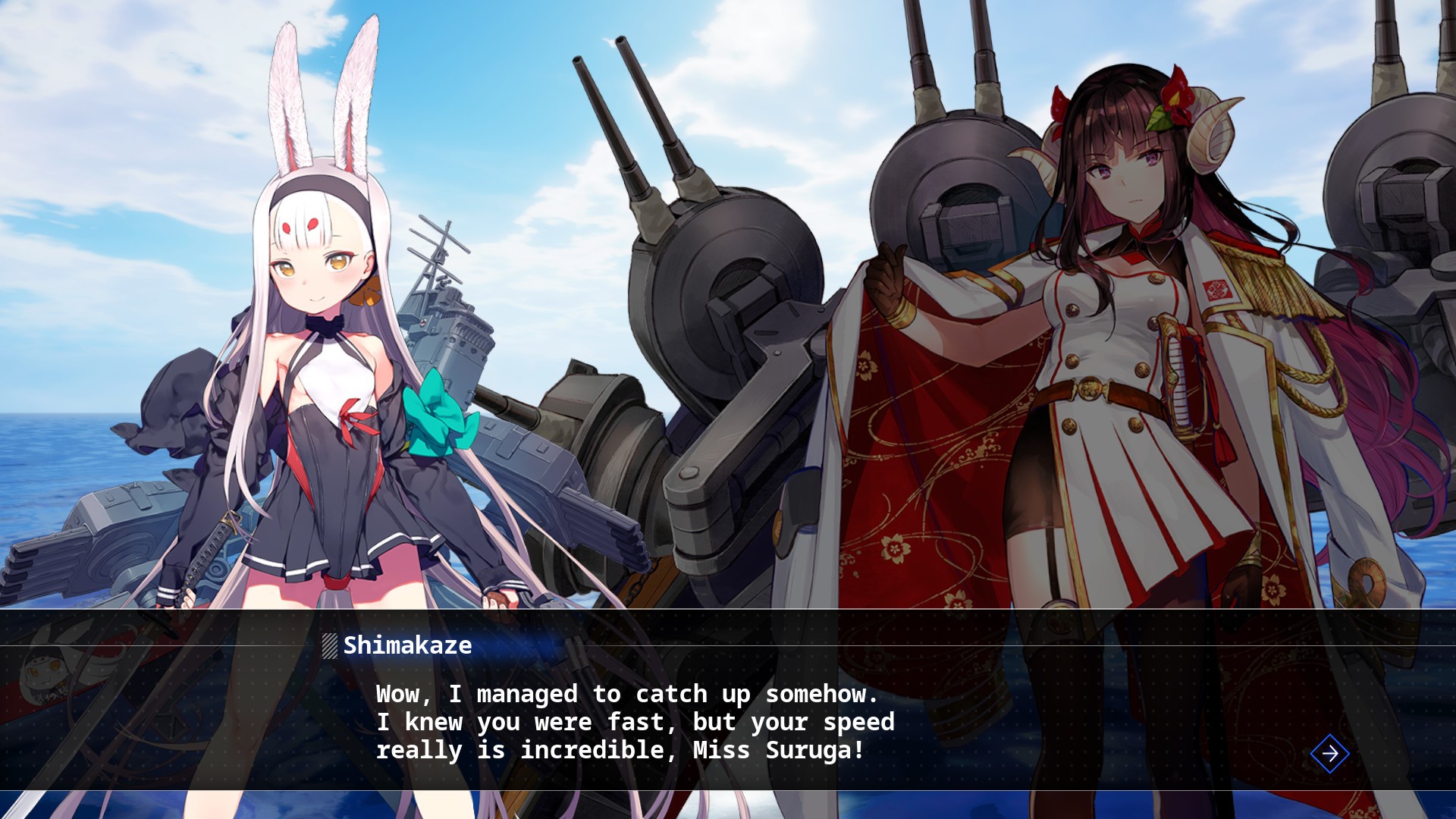 Azur Lane Crosswave’s graphics are decent overall. The visual novel sections that take up most of the game look sharp and the font size is easy to read. The ship battles feature some reasonably detailed character models and bullet/explosion effects, with the overall look of the battles being quite busy. There’s a lot going on at once on screen, which does cause the occasional frame rate drop, but it doesn’t detract from the experience too much. What does detract from it is the heavy reuse of environments. All of the game’s battles take place in the same sea environment, with the only difference being the enemies that appear. This makes the battles feel even more repetitive than they already do unfortunately. The music is also lacking, with only a few different tracks playing over and over during the course of the game. It gets repetitive after a couple of hours.

Overall, Azur Lane: Crosswave is a game that will likely feel underwhelming to all but hardcore fans of Azur Lane. The action RPG gameplay is shallow and repetitive, which only leaves the hours of visual novel dialogue between the many characters as the game’s main draw. As a newcomer to the series, I often found it difficult to follow parts of the story and keep track of who is who and the characters’ relationships to each other. With heavy reuse of artwork, music, and environments, it unfortunately has the feel of a low budget game. Considering that it’s not a low priced game however, I’d advise any interested people to wait for the game to go on sale.

Azur Lane: Crosswave is a game that will likely feel underwhelming to all but hardcore fans of Azur Lane.