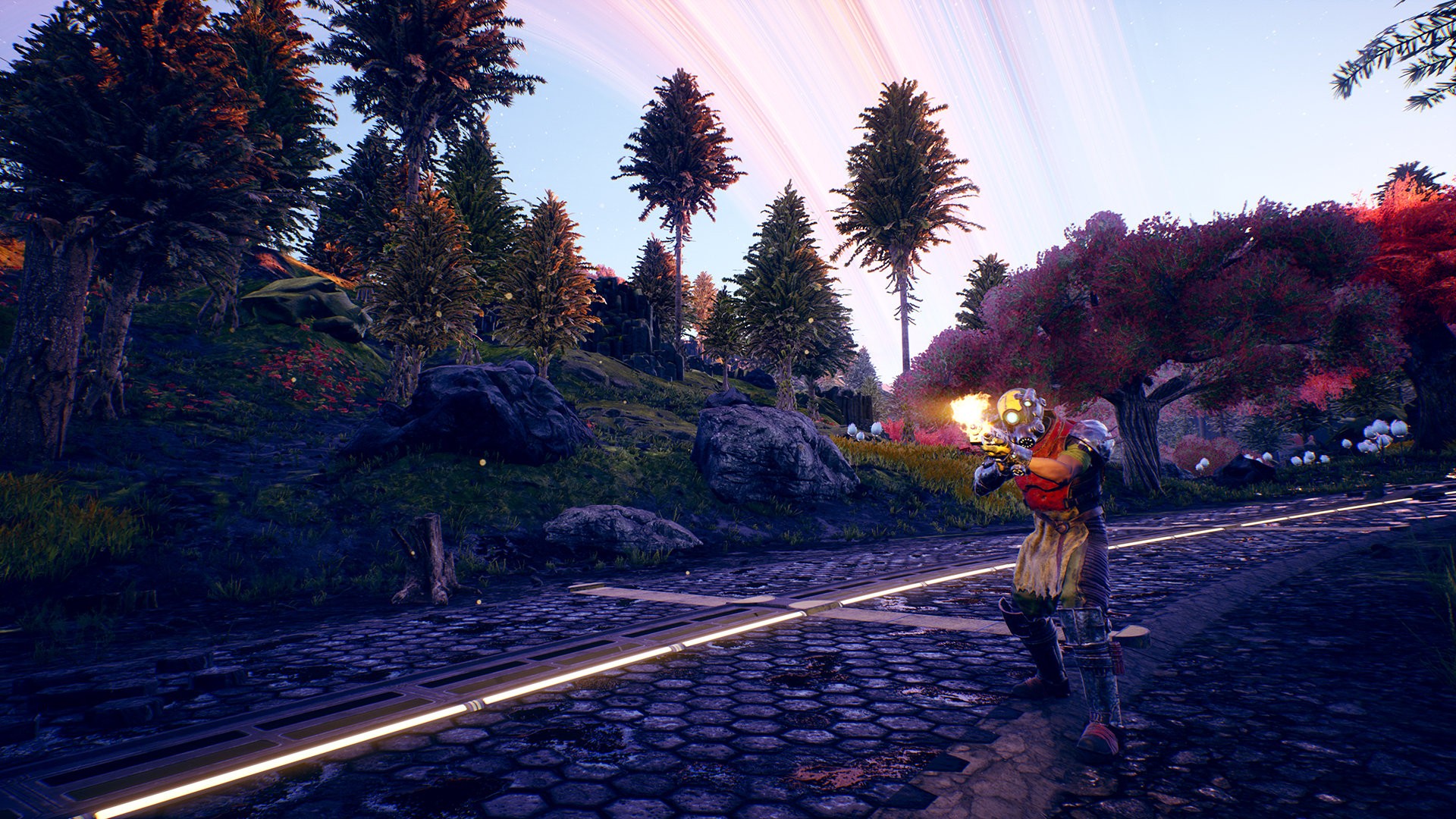 Personally, I never understood the obsession with Bethesda’s RPGs. They were always overly simplistic, bloated with meaningless content, and offered very little in terns of narrative and side-quest complexity. And to surprise to absolutely nobody, the best games with a Bethesda logo stamped on them, are titles published by the company, but developed by third party studio. Fallout: New Vegas is the best example of that and what is even less surprising, is that Obsidian, the studio behind New Vegas, has also manged to topple any of Bethesda’s efforts with the just released, The Outer Worlds.

The Outer Worlds, just like New Vegas is a dystopian, over the top RPG, with a great narrative, full of eccentric and polarising characters, which are both impactful and memorable. But where The Outer Worlds truly gets a leg over Bethesda’s rather pathetic Fallout 4, is in the department of world design. As the world, or rather the worlds of The Outer Worlds are filled to the brim with colourful and eye-catching landscapes, thrilling fauna and flora, and a multitude of towns and settlements, which are all distinct and unique. And what makes the world design even better, is that it is all justified within the title’s ingrained lore, as well as the surface level narrative.

Each and every single in-game town is based around an industry which is both keeping people employed, and alive. However, the said industries are completely monopolised, meaning that every planet is controlled by a single company, of which the owner, is a member of The Board – a galactic super corporation, which holds the planets of The Outer Worlds, in its grip. And this corporate centric environment allows for a trifecta of tension between the corporations, the employees, and dissidents. And this leads to a multitude of interesting, and captivating storylines which all are a part of the wider plot – thanks to the title’s reputation mechanic.

In-game reputation of your created character, can be a double-edged sword. As on one hand, it can allow you to further you in-store discounts and unlock more questlines for certain factions. But on the other, it can completely lock you out from certain towns, and settlements. And in fact, negative reputation with certain factions can completely alter how the core narrative progresses in your case. For example, during my playthrough, I had poor standing with the board, meaning that all Byzantium guards had an order to shoot me on sight and this disallowed me from completing some of the quests around Byzantium, as the mission specific NPCs would be hostile towards me. And while I found this rather disappointing, as in order to do those, I’ll have to play the game from the very beginning, then ultimately, it has reassured me that The Outer Worlds is a true RPG. 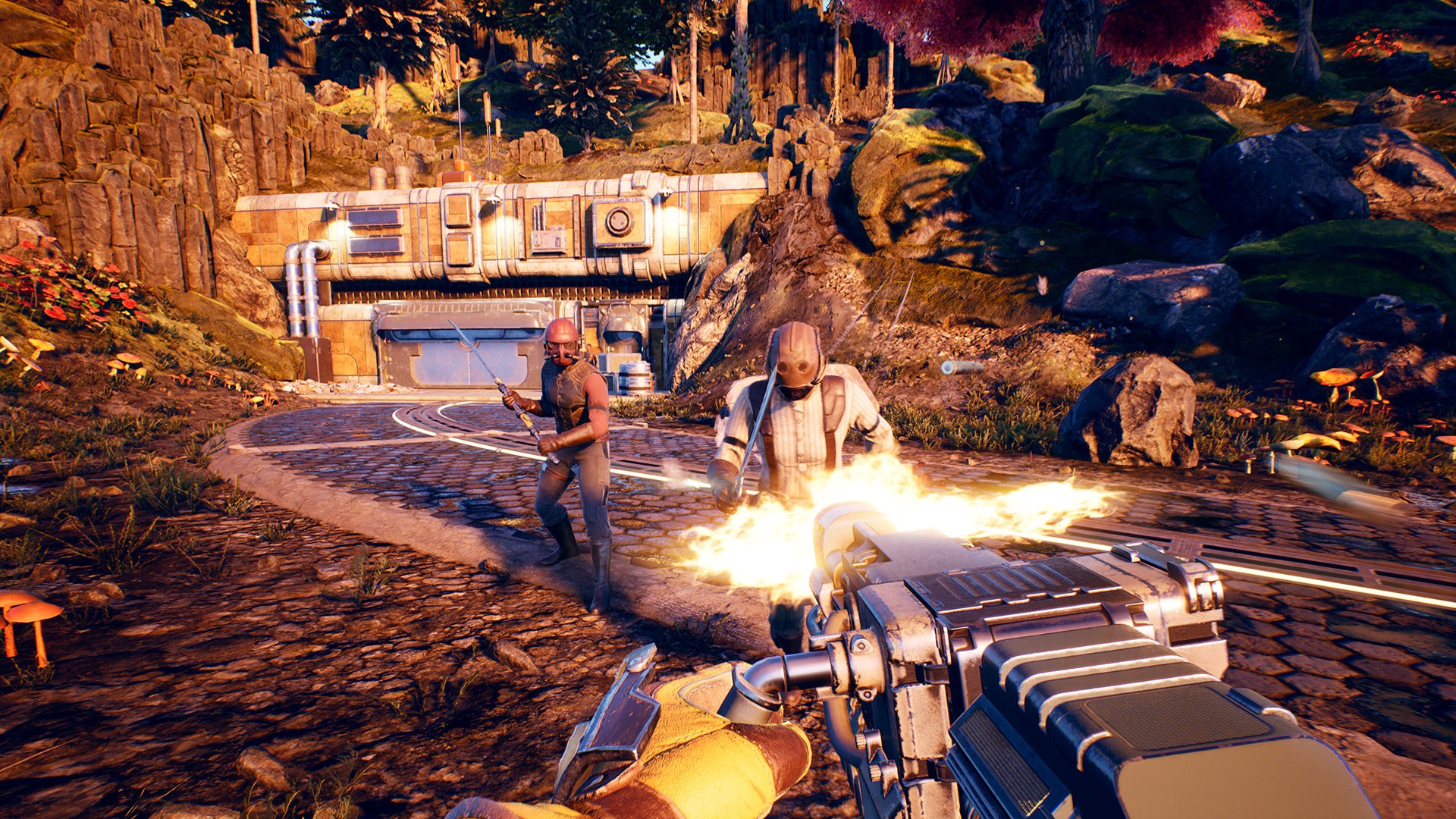 Unlike in most RPGs, The Outer Worlds allows you to kill and slaughter absolutely anybody. So, if you want to go through the game, curb stomping everybody you come across – you are welcome to do so. And this does not only allow you to proceed further with the story, but at times, it also allows you to save some time, as killing some NPCs allows you to skip entire storylines, and if you are using a melee weapon, it quite literally allows you to cut straight to the chase. And this is where The Outer Worlds is at its best, because it allows you to do everything you want, however you desire and while The Outer Worlds always gives you a plethora of choices, then there is always that one ultimate choice which begins with the trigger and ends with the barrel of your gun.

In most games, plot-centric decisions are often incredibly black and white. However, in The Outer Worlds they all have varying shades of grey, as all the in-game factions, even the smallest ones, have two sides to them. So, the good guy deserters may just want to live their lives outside of The Boards grip, but at the same time, they also won’t stop at anything in order to keep their camp going – and this includes the annihilation of an entire city. And while this is just a single, very specific case, then it is only one of many and in order to experience all the available choices you will have to play through The Outer Worlds at least a good, half a dozen of times.

The in-game decisions do not just start at end at the narrative level, because just like any good RPG, The Outer Worlds allows you to pick your armour, weapons, skills, abilities, and companions and all those impact on the development of your character. As certain armour types and helmets give you a boost to certain skills such as technology or stealth – and the same goes for your companions, of which you can have two at any given time while exploring. But at times, it is for the better to leave certain companions at your spaceship, The Unreliable, as your in-game decisions affect your relationship with them. So, while leaving the reverend behind will negatively impact your hacking skills, then ultimately, it will allow you to be in a much better standing with him and have him support you in future missions.

In short, there is an abundance of skills and abilities within The Outer Worlds. However, the same cannot be said about the weapons and equipment. Sure, the title at hand is full of different potions and boosters, which are constantly cluttering your inventory. But as far as weapons go, there is only a handful of them. And while there are additional variants to each weapon, then those only differ in name, and damage output. And if you like, you don’t even have to collect new weapons, as you can fully upgrade your starting handgun, to a point where it will be just as good as the Mark 2 version of it.

The Outer Worlds, also features weapon and armour attachments, but those alter the visuals of your equipment very little, if at all. So, if you are fan of customization, you will probably be disappointed with the experience which attachments offer, within The Outer Worlds. And these meagre upgrades system, in accordance with a minuscule number of equipment, makes The Outer Worlds feel somewhat incomplete. As if it needed more months in development, or at least another expansion – which is surely coming because upon completion of the main storyline, as not all planets are unlocked. 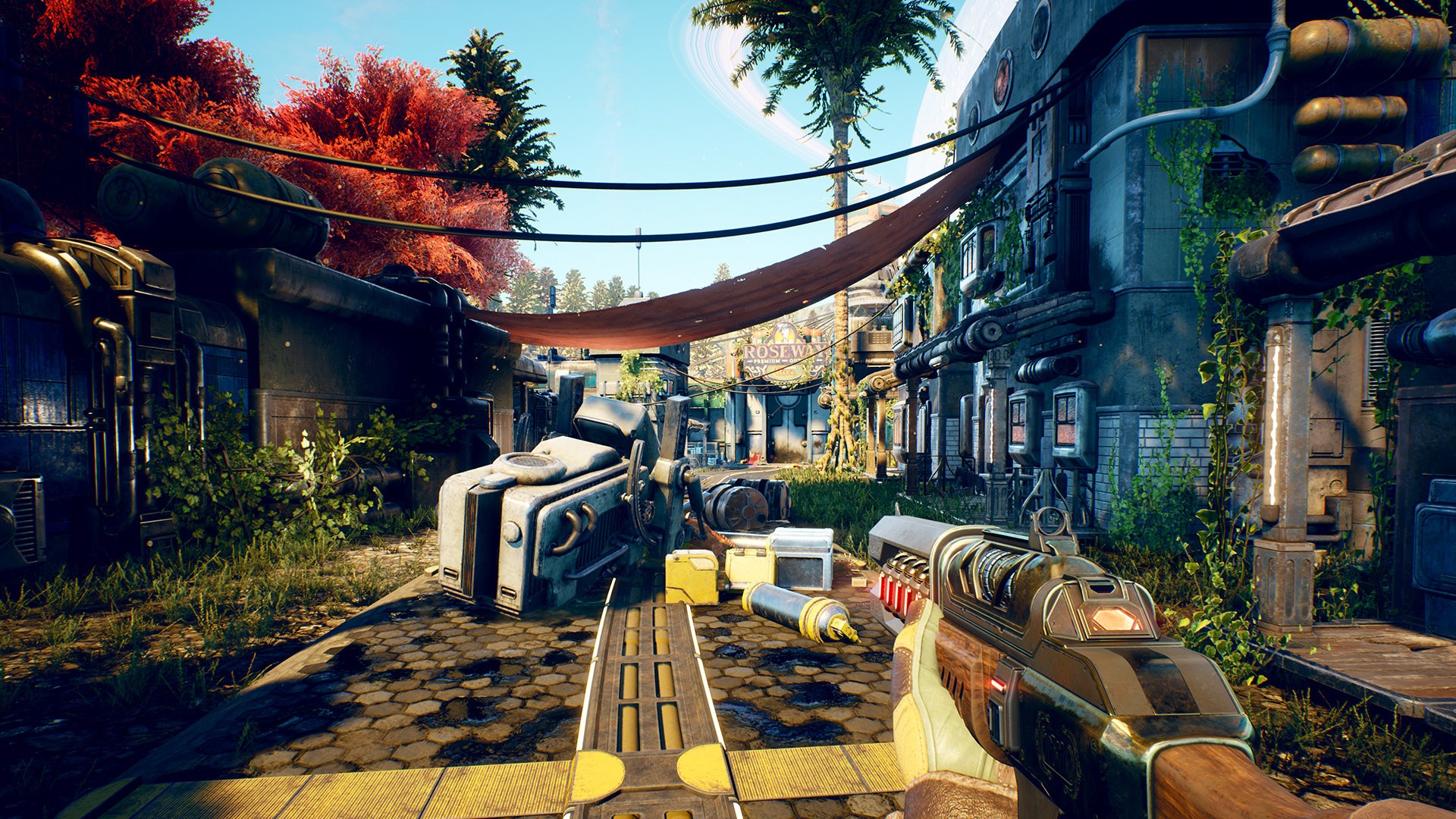 Since we are on the subject of planets, then it has to be said, that in terms of infrastructure and architecture, they do leave a lot to be desired. And this is mainly due to the fact that all-in game planets and locales are rather small, and they are full of buildings which simply cannot be entered. And this is especially disappointing, because at around 10 hour mark, after you reach the second major planet, you will spend most of your time staring at locked up buildings, which are nothing more than a part of the scenery.

All of the above, in addition to miniscule number of in-game cutscenes, make The Outer Worlds like it has been rushed to completion by Obsidian. Don’t get me wrong, The Outer Worlds is a fantastic game, and it only comes second to The Witcher 3: Wild Hunt. However, no matter how you look at it, you can’t but feel that Obsidian has released it as soon as it possibly could, just to move onto the partnership with Microsoft. And sure, we may see some DLCs, or even expansions in the future. But as things stand, the narrative and world design, are the only two things that really keep the title together. I still had great time with it, and it was definitely worth the money, but I’m just disappointed that there wasn’t more.

As for The Outer Worlds’ technical side, it is borderline immaculate. The framerate is stable at 30fps, even on the standard PlayStation 4, the title only hitches whenever and autosave kicks in, and unlike other modern RPGs, The Outer Worlds never crashes. However, the title’s technical prowess has been achieved at the cost of loading screens, which are unfortunately rather common. As nearly every in-game settlement, and larger building, features a loading screen which can last as little as couple of seconds, or as long as a minute with change. But in the end, this is a small price to pay, for something that is so rare these days.

Ultimately, The Outer Worlds is a fantastic game from start to finish. And while it can, and does feel rather shallow at times, then at the end of the day, it is still a great game, with a fantastic story, and a fair amount of cutting-edge with and satire. And if you are torn between spending your hard-earned money on either the newest instalment of the Call of Duty franchise, or The Outer Worlds, then the latter is by far the better choice. It may not feature a multiplayer, but the amount of content which it possesses will last you for hundreds of hours.

The Outer Worlds is one of the better RPGs of this generation, and if not for The Witcher 3, it could easily claim the number one spot.