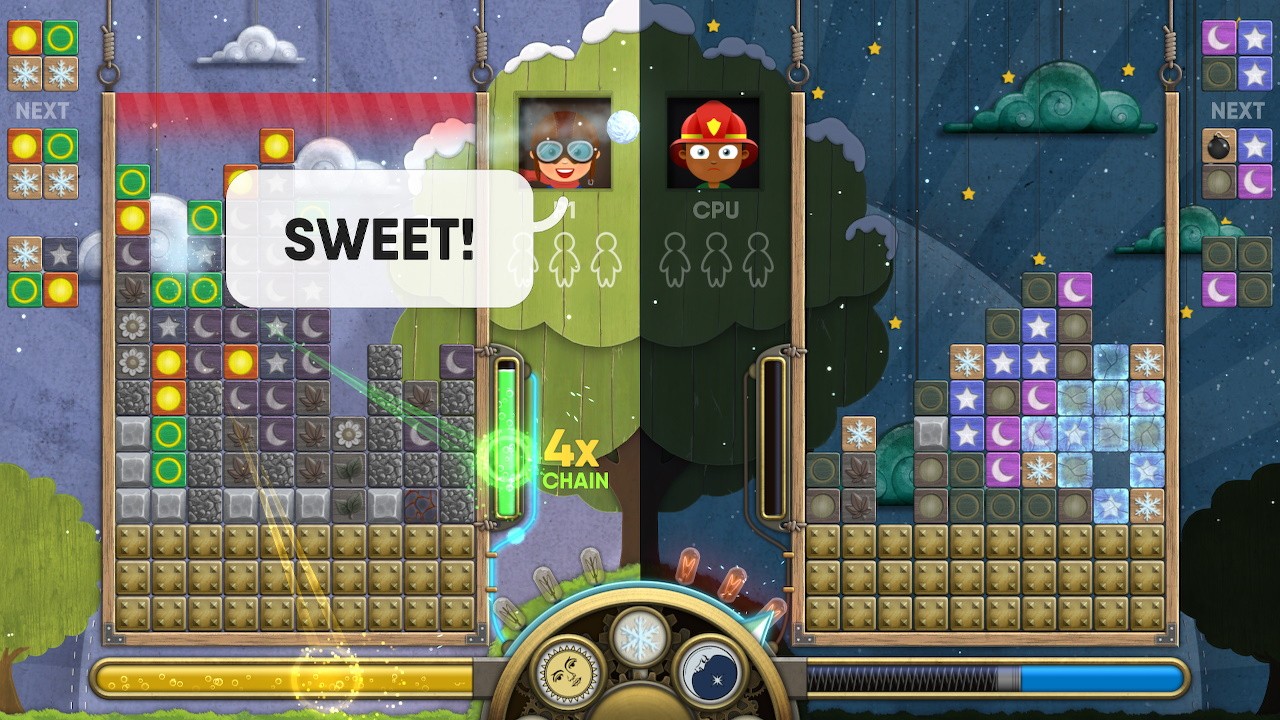 Trying to bust into the puzzle game market is a difficult and sometimes enormous endeavor. We have too many companies that either have longstanding, familiar names (Tetris 99, Picross) or a fair number of free-to-play imitators that are making hand over fist on the mobile market (looking at you, Toon Blast). Even still, the demand exists for some longer form games that have more to their puzzling than “keep smashing blocks forever and pay us a dollar once in a while”. So, while Day and Night may not have been initially on my radar, this cute and surprisingly complex game from Ridiculous Games has made a splash on my Switch and on my family, and it’s easy to see why.

Day and Night plays in a style that’s very similar to games like Tetris Attack or even Pokemon Puzzle League. The initial presentation is a match four style in any direction: as long as four of the same tile are touching, it’ll trigger a reaction. You can counter an opponent’s reaction by getting your own set of four before the timer (your opponent’s reaction meter) dies down, but you need to be careful. The studious will know that creating combination chains will result in stronger and heavier reactions, with the result that the strongest of “attacks” creates a permanent, unmovable line of blocks along the bottom of the screen. So, if you’re not careful and too vested in trying to make larger combos, you’ll end up in trouble in no time flat. If your blocks cross the invisible line at the top of the screen, that’s the end of the match for you. If that was all it was to Day and Night, we’d already be home for lunch and this game would be sitting ugly at 2/10 for zero creativity and innovation, but we’ve only just touched on the very tip of concept, so let’s delve further into the game itself.

As you might gather from the title, Day and Night focuses on different phases of time, which creates different effects in terms of gameplay. Since most matches are best two out of three, it’s important to note that you’ll get blocks that are grayed out and will only work in the opposite timezone. For example, you’ll often get two suns and two moons in the same cube, with the former working in Day mode and the latter in Night. The blocks out of phase cannot do anything until you rotate timeline, so you need to gamble your attempts as you play forward. Sure, it’s important to be making those attacks and getting those combinations now, but what about when the tide turns and you’re on the other side of the sphere? Suddenly it becomes apparent that your opponent, at some point, planned out a counter attack and has been waiting for the change in tide so that they could lay a devastating combination before the game even begins. There’s nothing worse than feeling smug about winning a single match, then having the creeping horror set in as your opponent fires off six combinations before the word “go” is even uttered to start match two. It’s great, and it keeps you guessing and on your toes to make sure that the gameplay does just get stale and repetitive. 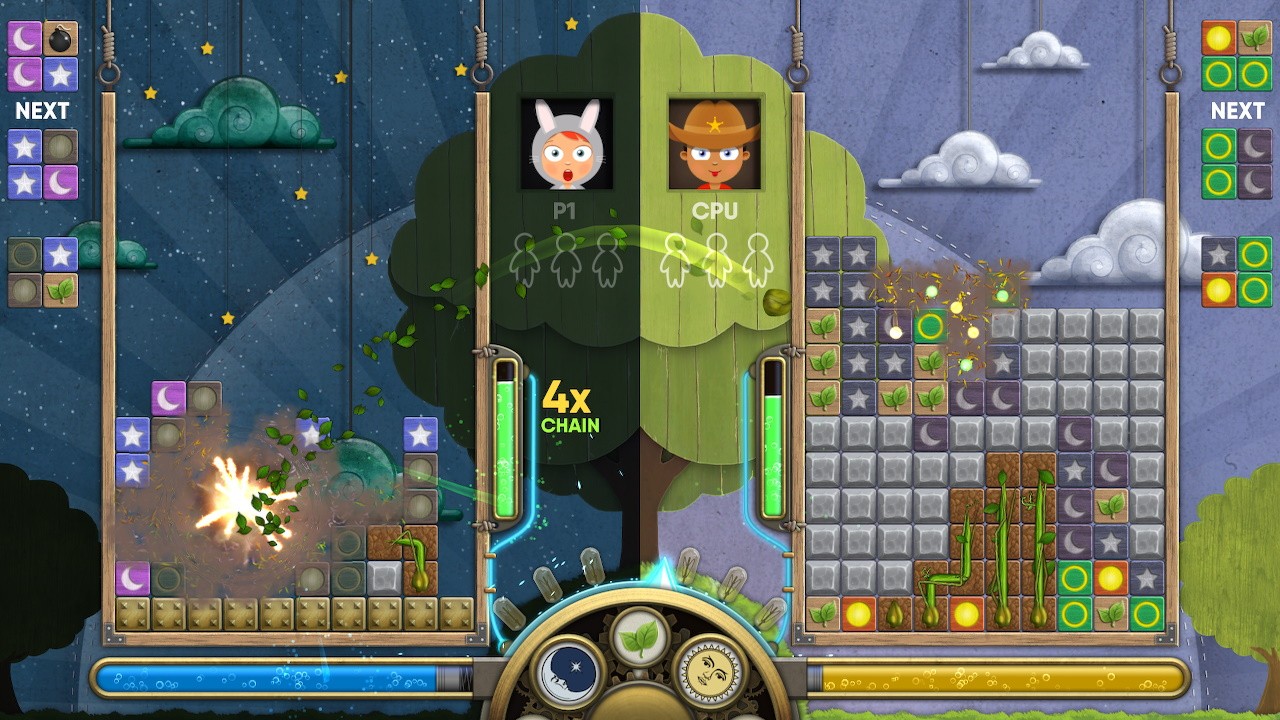 Speaking of which, Day and Night also sports a number of speciality blocks that require a bit of concentration and serious focus to utilize properly. You’ve got your seasonal blocks, which need to be triggered in groups of four in order to work, but successfully attacking with them without your opponent countering leads to interesting effects. Firing off a set of spring blocks plants a sapling on your opponent’s screen that slowly grows and creates a tendril of non-matchable blocks that could, theoretically, reach to the sky and spell game over. Additionally, you have one off blocks that could help or hurt you. Things like the bomb block and the crusher block can destroy a ton of additional blocks if they’re fast dropped, so consider the location before you decide where you’re going to move next. Additionally, the ice block is the biggest pain of all time, a block that will generate a screen long horizontal row of ice that blocks you off from the rest of your tiles for a certain number of turns. You can avoid this by setting it down slowly, but it’s easy to look fast, think later, and slam it down and freeze yourself without realizing what you just did. It’s something that you can thankfully blast through with an explosive block (or it will thaw in eight blocks or so), but damn does it trip you up when it appears, and it almost never seems to trip the AI.

Right, Day and Night as a solo endeavour. I was sceptical about this game when it landed because you take far, far too long in rehearsal (which is what they call the tutorial), and the concept seemed very basic at first. However, once you clear the initial setup, you find there’s a ton to do for both versus play and single player mode. The story mode takes advantage of the cute backdrop of Day and Night, which is a children’s school play, and weaves a very stereotypical but nonetheless cute storyline for each of the six “worlds” that you can play through in the story mode. Tropes like “let’s kick the bad guys out of our old west town!” and things like that. The CPU players are fast, don’t get me wrong, but they also aren’t particularly lethal or vindictive in the first two adventures. As you get into the later stages, you’ll find the game scales wonderfully, and you really need to plan out attacks better, thinking a few moves ahead and making sure you’re on top of things in order to succeed in three different wins (no two out of three here, you gotta get three). The whole thing is also scored with familiar classical music, so, while fitting, it also doesn’t need you to focus on the original music in order to fully enjoy the slightly campy experience of the school plays. Just rock out and read the text bubbles from everyone, it’s not voiced. 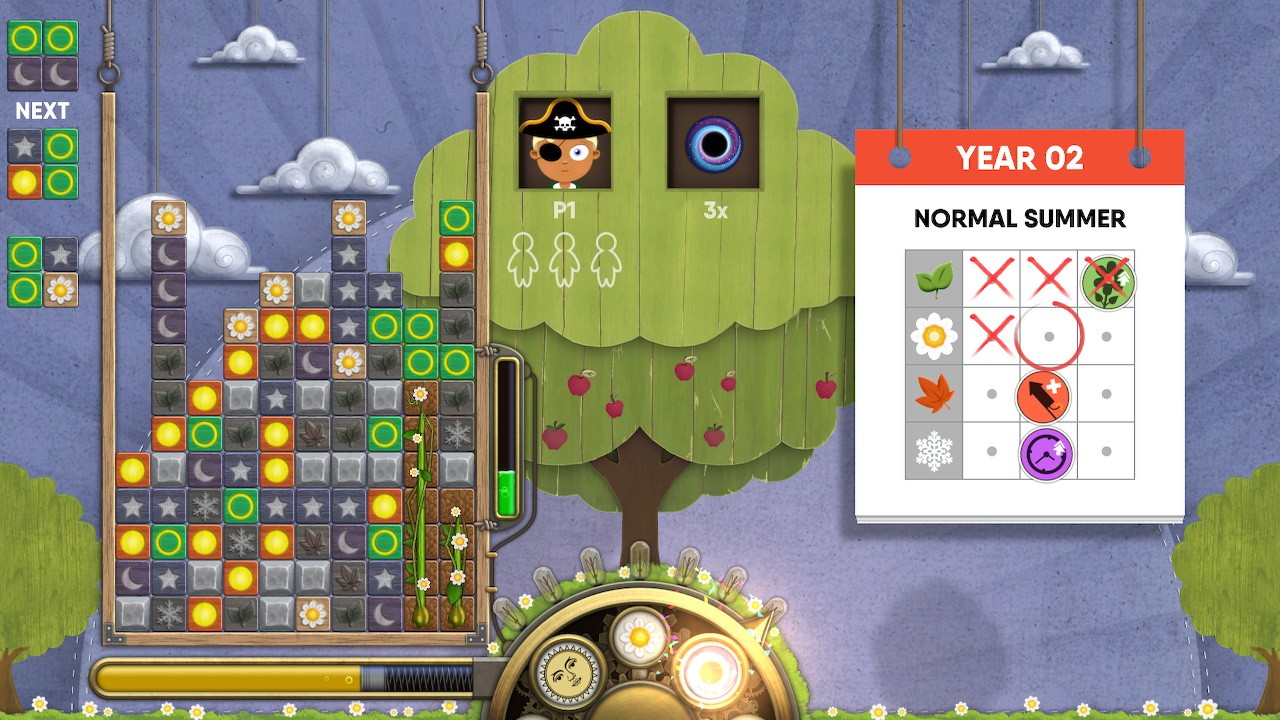 Additionally, there are the Survival and Dare modes. Survival is just what it sounds like, and it’s for those solitaire enthusiasts who love to see how long they can play the same damn game in one sitting. That’s never really been my thing, but that’s also why I checked out of Tetris 99 some time ago, and so this is a good option for other people. The Dares are basically skill quests to challenge you to play in different, weird ways. Super speed mode, play with the controls reversed, play with the screen upside down…distinctly difficult but funny modes of play. The reward, of course, is the same for beating different story mode chapters: hats. You get adorable hats to put on any one of the multinational child avatars you can choose from in versus mode, and good on Ridiculous for having a good variety of player characters. Sure, you could always have a design your own, but that can be costly and time consuming: just have a little something for everyone on the planet, and everyone is happy. Thank you for doing this, Kayo looks adorable in a Bunny hat, and it’s my favorite way to humiliate other players.

Frankly, I’m stunned at how much I like Day and Night. The price is right, the performance on the Switch is fantastic in either handheld or docked, and there’s a really good amount of replay value right off the bat. The only disadvantage I can see is that it’s a relatively small game with a very, very generic (but appropriate) name that’ll make it difficult for people to find it outside of word-of-mouth. Nevertheless, if you’re looking for a complex and fun puzzle game with friends and family that’s also very cute and snappy, then you can spend all week playing Day and Night.

When cute meets complex it can turn messy, but Day and Night perfectly balances fantastic game play with a very sweet presentation that works wonderfully.