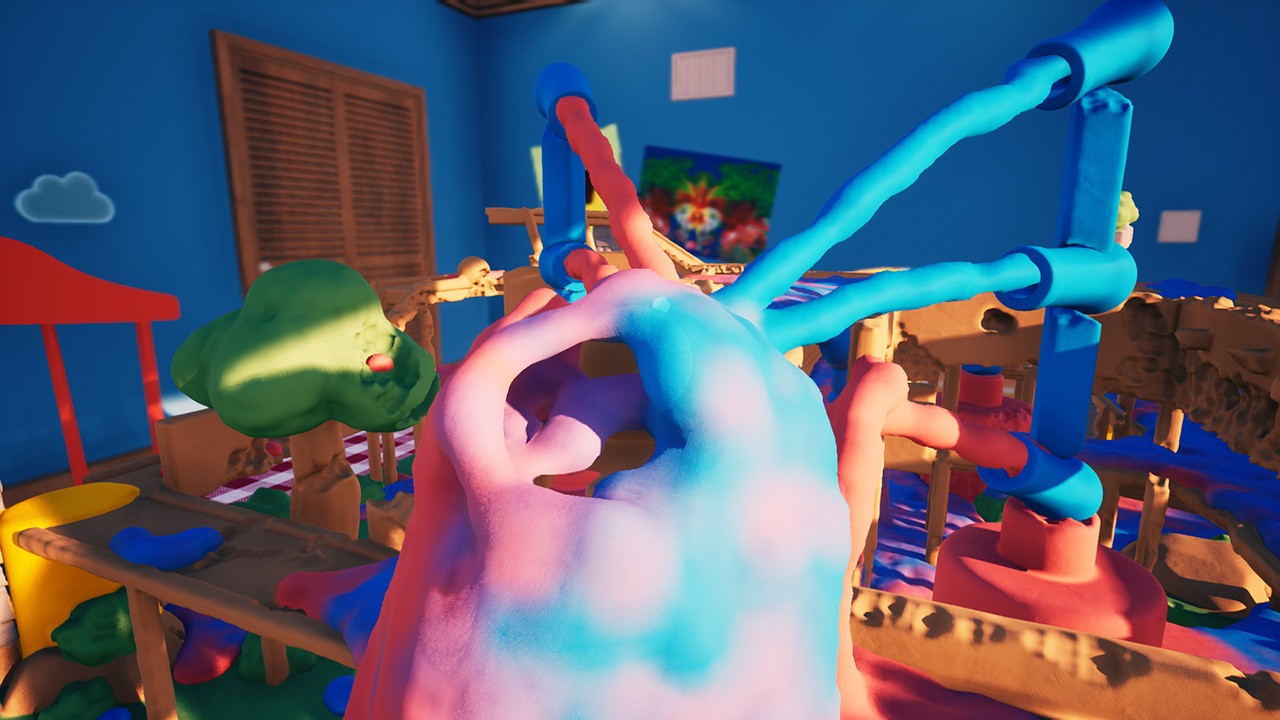 I don’t think I’ve ever seen anything like Claybook before. It’s an incredibly vibrant and creative world where you take on the form of a piece of clay, though most of us would associate as plasticine or Play-Doh given the colour, but clay comes in all kinds of colours, as Claybook portrays.

There’s an abundance of features from the outset, giving you a few options. The main ‘campaign’ is separated into books which you can unlock one-by-one by collecting in-game stars. There are five books from the start. The book ‘In The Woods’ is the first you can play. Outside of that, you can create your own book that can be hosted just for yourself or for others to play. Again, you can divide your own book into chapters to tell your own… clay story?

For the sake of the review, I delved into the editor to see what it was like and was quite impressed with what you can do. There are the options to add assets as seen through the main game, gameplay mechanics you can implement, forcing those who play the level to have some restrictions and less free reign. It felt a little complicated to get into, but once mastered, it was more a case of managing time effectively. For me, I would start a world then have a sudden idea to scrap everything, restart then do the same again. It’s not on par with the likes of Super Mario Maker, but enough to experiment with. Forgive the cliche, but the limitation is your imagination. To some degree. 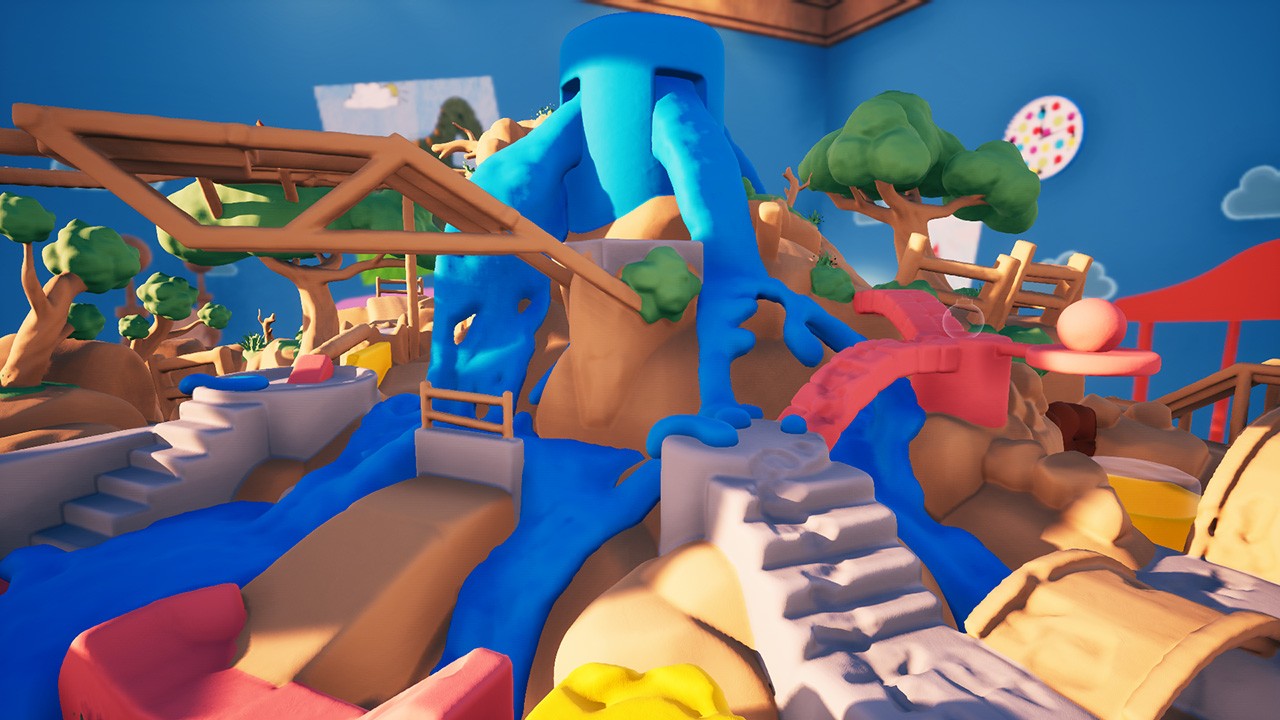 Going back to the single-player, it all starts with a tutorial. Of course! The HUD seems a little over-populated at first, but once you learn the hot-keys, it’s not so bad. You have a choice of shapes that can be switched to on the fly – each having their own role depending on the obstacle. I have to say that the physics in Claybook are brilliant. Every shape interacts with the environment according to the structure; choose a sphere and manoeuvre around the play area with relative ease. Pick the cube and movement is clunky, but it’s better at climbing stairs.

The interaction each shape makes is brilliant. Start off with one colour, and as you traverse the clay areas, your chosen shape begins to merge with other colours – giving that dirty messed up appearance you see in any pile of Play-Doh handled by kids of any age. The only thing not present in this clay fusion was the extra bits that land on the floor then gets trod into the carpet. In that sense, Claybook is bliss – messy play without the aftermath. I did note that with the clay you play, while it happily rolls over the terrain and water flows as you would imagine clay may move, gravity doesn’t appear to be present, even though you’re causing destruction. Structures don’t collapse. Good for kids, but something to make older players feel a little miffed.

But it isn’t all about exploration as there are set goals for each level – notably implementing the time factor. Aside from writing a review in ample time, I like to dive deep into a game and take my time. Claybook is precisely that, but as you are being timed – and ranked, there is a slight sense of urgency to beat your unknown peers a.k.a. online leaderboards. My first attempts were a marvel – having been listed at the bottom of the boards consecutively. It was time to up my game and start meeting the challenges, and this is where the single-player side of it starts to slip away. 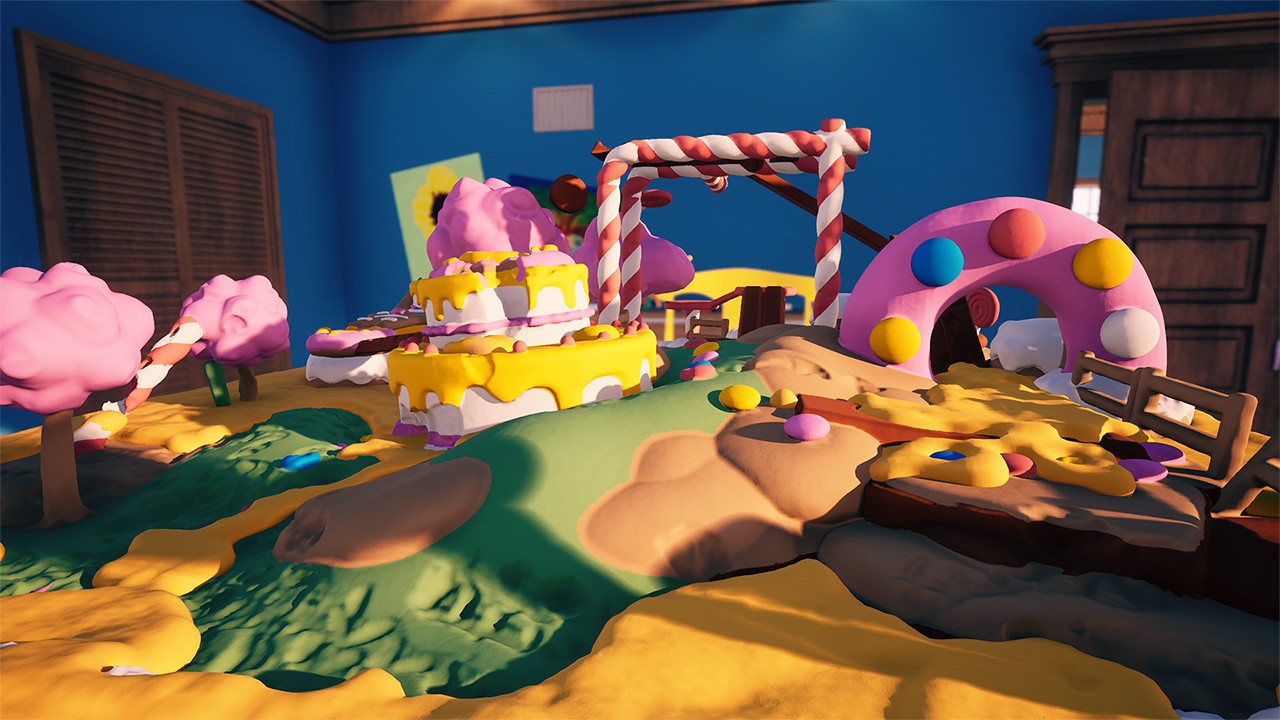 With the timer ticking away and the destructive element of carving away at clay with your own shapes, I often found myself literally digging a hole. There is a feature of rewinding time and going back to a previous point, but it was always too late for me. While the physics are great, they are slightly slow in movement which is a good and bad thing. The good means you have additional time to position yourself around impending pools of clay trickling down, but on the other side, the water effect is so slow that while waiting for it to run down a path, you end up rolling about undoing what you just setup. This is down to the camera angles as they were the most frustrating part. You do have full control, but when you’re a ball of clay buried deep down in a hole, there isn’t really an advantageous point to get a good view.

And while I’m having a moan about the camera angles, I have to say that the music drove me nuts. With a colour palette that looks fresh out of a soft play centre and gameplay that points in the direction of children, it makes sense to have ‘nice’ music. It was just so repetitive that I couldn’t bear it any more. Once I took that element out of it and then ignored the time side of things, I found I could start enjoying the game more.

Even though there are a few negative points raised above, Claybook is, in fact, an enjoyable game and such a great concept. I personally felt a bit let down by the competitive element of it (I couldn’t bear being at the bottom of the leaderboard) plus the camera angles. To counter that however, Claybook does allow players to progress even if they haven’t completed all objectives. I let my 9-year-old try and being the cruel father I am, didn’t give her the solution and make her work it out. She got quite frustrated, but once she worked out how to play it, she did just enough to get through, then went on to the next level. Perhaps it’s a generation thing? I personally would have tried to unlock as much as I could.

I’d recommend this for younger children, or a family play session. It can be a little frustrating for some, so you need to give them a few pointers. That said, Claybook is a unique, vivid and forgiving puzzle game.