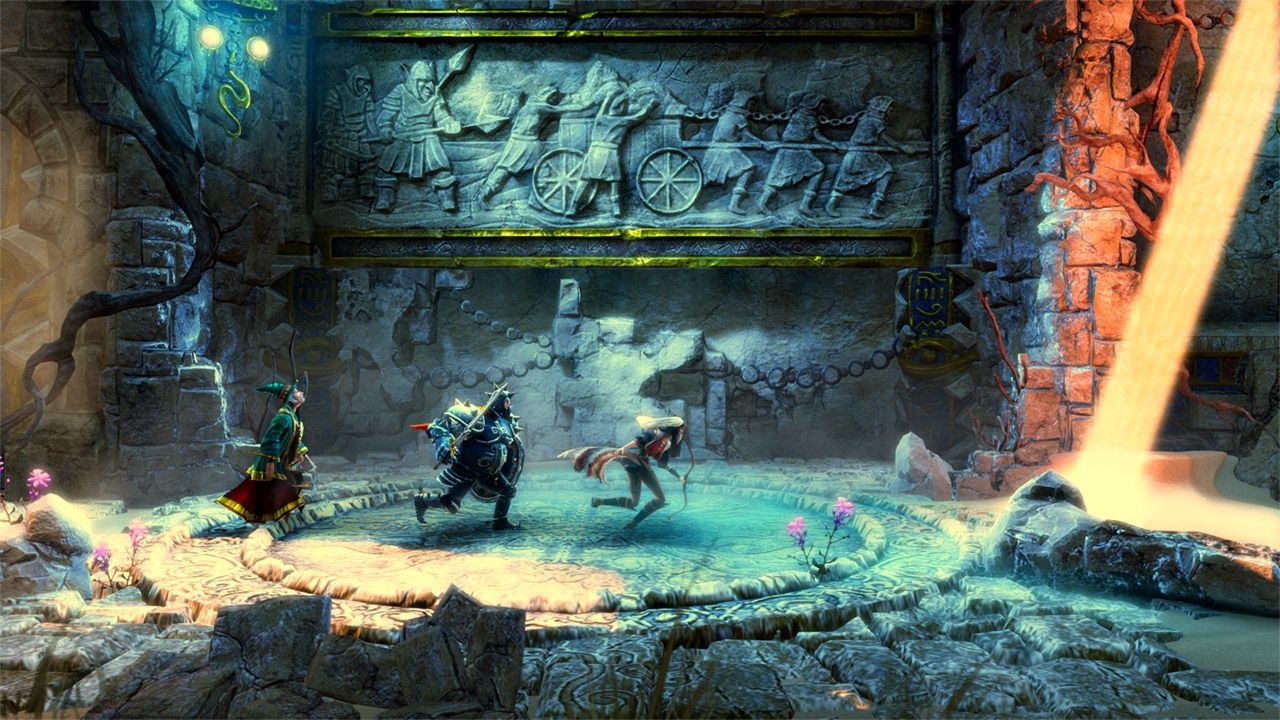 I’ll admit, until I played Trine 2 the series had very much slipped underneath my radar. The high fantasy side-scrolling platform series always looked interesting, but I just never found the time to delve into the medieval logic and physics puzzles that make the series so popular. But for a game that’s now eight years old, Trine 2 is perhaps the finest puzzle title to land on the Switch in quite some time, and it manages to feels fresh regardless of its seniority.

It’s the Trine series’ USP that sets it apart from its competitors. Switching seamlessly between three characters at the click of a button gives you ultimate control over situations, allowing you to approach puzzles however you see fit. Spread between these puzzle sections are platform sections and a great combat system that, while not the main draw, is incredibly fun and offers the same loose approach to give you ultimate control over situations.

The three characters each offer powers and abilities that make them all unique in their own respect. Amadeus, the wizard can create movable platforms and manipulate the environment, while Zoya comes packed with a bow and arrow and a grapple hook. Pontius acts as the backbone of the group, a sword and shield hero that can destroy obstacles and take on enemies with ease. A skill tree can be upgraded throughout the game too, unlocking more useful powers and abilities as you progress through the games chunky campaign. 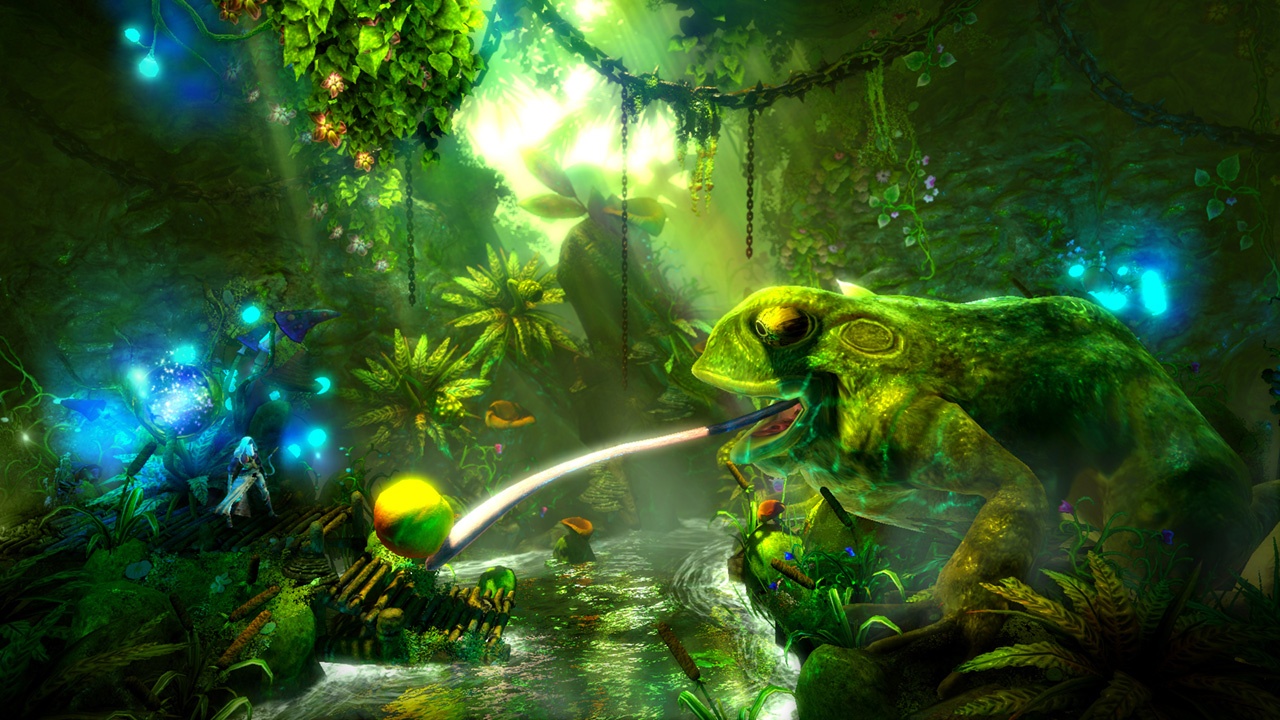 Tying the whole thing together is a fairy-tale-esque medieval setting that’s straight out of a children’s fantasy book. The light tone goes hand-in-hand with the motley crew of heroes you command, even if the storyline is fantasy by numbers, which is by no means a deal breaker. The beautiful environments, like goblin-filled forests bursting with bright, gorgeous flowers and overgrown fauna, make the perfect setting for the adventure. The character design is also flawless, and even outside of the horrible goblins and giant, monstrous boss battles there’s a great attention to detail, with giant frogs and scurrying crabs providing environmental hazards along the way.

There’s a great mix of logic puzzles, balance tasks and everything in between, all requiring the utilization of multiple heroes. The best thing about it is, is that these puzzles are usually none-linear, so just because it feels like a job for Amadeus, you can often complete most conundrums with one of the other heroes, if not a combination of a couple. For example, at one point I was trying to reach a hidden area that seemed straightforward, and in a normal situation I would have used my wizard pal to create a couple of blocks for me to jump upon. However Amadeus had been felled in battle and I was yet to find a respawn point for him. Instead, I used Zoya’s grapple hook to swing off a couple of nearby trees to nail a sketchy landing on the platform I was aiming for. It’s this freedom that makes Trine so enjoyable, with your imagination being your most vital tool.

But if you’re worried that making puzzles so approachable also makes them too easy, you’d be hardened to find a single section of the game that doesn’t require at least a modicum of planning and thought. You don’t however feel overwhelmed with difficulty, but they’re often not as straightforward as you at first think. 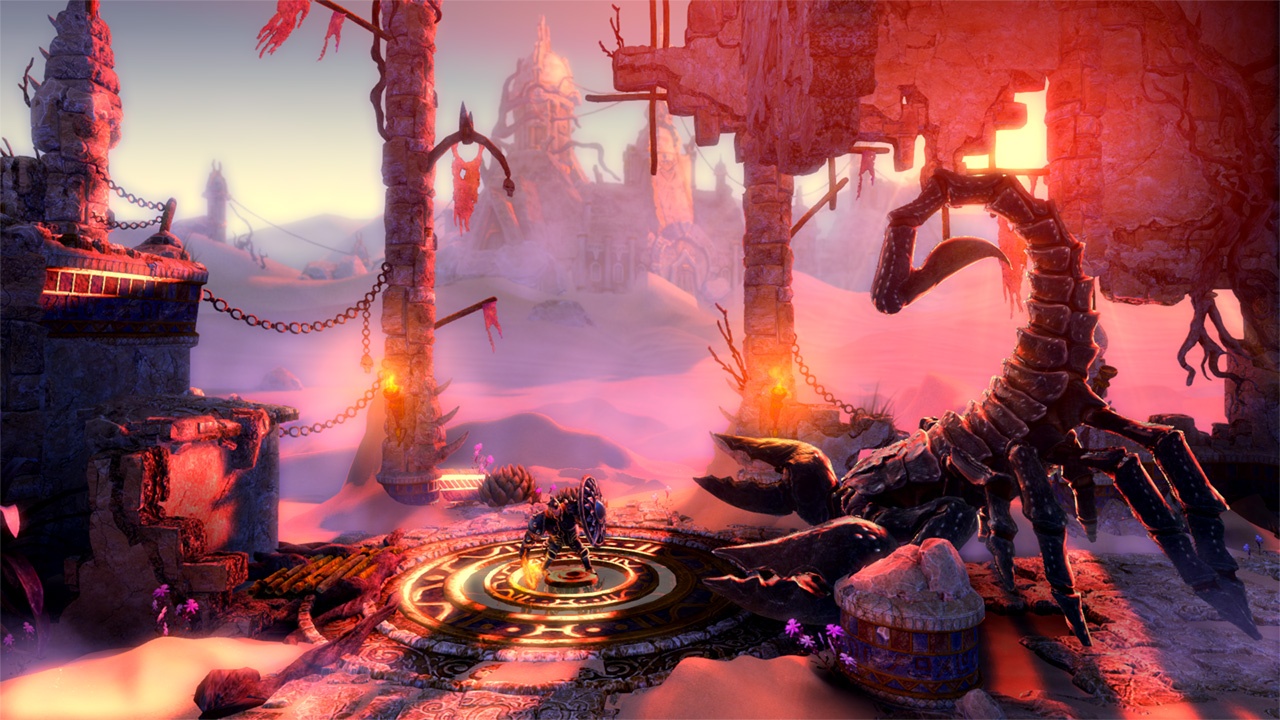 While puzzles make up 80% of the game, platforming and combat make up the rest. Its certainly not an afterthought, and combat is often as fun as the platforming. Many of the skills you unlock aide with fighting goblins, such as frost arrows to slow them down, or a hammer throw that knocks even the toughest bad guys down. It’s really enjoyable just to play around with enemies though, for example using Amadeus to levitate goblins around the map is hugely entertaining, as is swinging into them as Zoya. Again, it just shows how much fun Trine is when it let’s you be you.

Chapters are pretty meaty and take a while to journey through, but the Switch edition of Trine 2 is the ultimate package for anyone who wants to delve in. On top of the base 13 chapters there’s a chunky expansion pack included called The Goblin Menace, as well as the bonus Dwarven Caverns chapter. You can also take on the game with a friend in multiplayer, as well as having loads of collectables to hunt down.

Despite a promise that the rest of the series will be making its way to the Switch at some point, Trine 2 is beefy enough to keep you going for some time to come. It’s fantastically polished, beautifully designed and the perfect fit in handheld mode, but just as fun when docked. Great puzzle mechanics are both challenging and fun, with enough leeway to let your imagination go wild.

It’s fantastically polished, beautifully designed and the perfect fit in handheld mode, but just as fun when docked. Great puzzle mechanics are both challenging and fun, with enough leeway to let your imagination go wild.