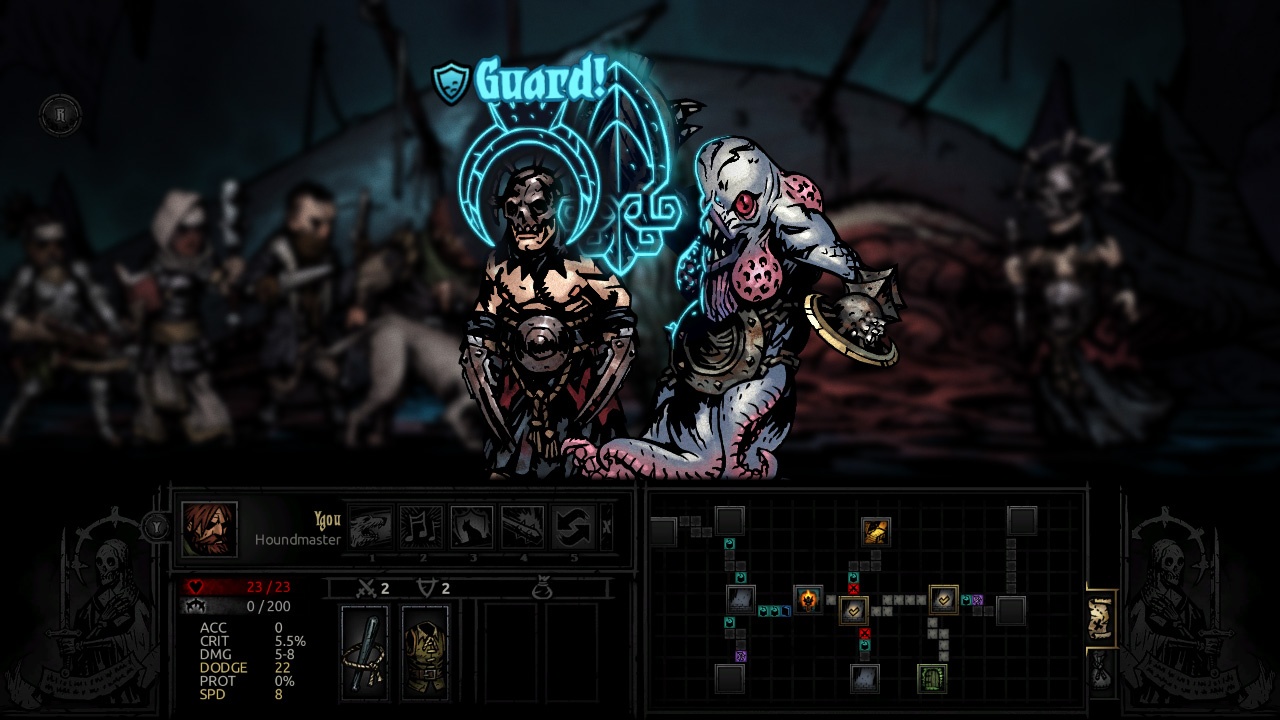 The dungeon crawler is a genre that continues to change and help define the era of gaming into whichever iteration it was born. Having played variations that involve both unsettlingly sexy monster girls and clearly inspired pixel monsters, it becomes very obvious that you can look at any base style of game (action/adventure, puzzler, dungeon crawler) and see how it’s shaped to better understand what is popular, interesting or at least different whenever that game was released. But, every so often, there’s a title that really seeks to try and emulate the way that certain games used to be made, and there’s two approaches to this. The first is to be very direct and clear in your intentions, and you create a game that looks and feels like it could have existed a couple decades ago, but you decided to throw in awesome Japanese monsters instead. No problems there. The other is to wrap the core mechanics and ideas into something that fools the audience so that they get hit with the nostalgia wave in an unexpected move. The latter is what brings us to Darkest Dungeon.

The premise of Darkest Dungeon is fairly straightforward to follow, but still difficult to swallow. You’ve been contacted by a far distant Ancestor, who writes a letter of terrible woe and strife as he describes what has befallen the once mighty and pristine home that is simply called Hamlet. Having expended much of the family’s fortune on wasteful opulence, the Ancestor has, accidentally, unearthed a great evil that tears and eats away not only at the home, but the land around it as well. Having no other course of action, he pleads with you to come and take care of the madness that lays beneath the ground, and to bring any and all help that you can in the process. There are several different dungeons with multiple levels to explore, and, only when they’re all dealt with, can you dive into the heart of all this decay: the Darkest Dungeon. Oh, and if you want to hire several dozen mercenaries in the process, that’s cool too.

If you really want to get an idea of what you’re in for, be sure to sit and listen to the entirety of the opening cinematic. Besides being able to enjoy the grating, broken voice of the narrator (voice actor Wayne June), you also get to understand the ideas and the style of the game as we move forward. Darkest Dungeon seems like a heavyhanded title, but it perfectly encapsulates the mood of everything from the moment you start the campaign. It’s gothic and shadowy to the point of being depressing, but not in a way that seems like a cry for attention. The writing and script of Darkest Dungeon really hits upon the similar notes that you’d find from Edgar Allen Poe or a lot of the Victorian era monstrosities, and, for a fan of that style of writing, this game is an absolute delight. If you’re not really into the flowery language of the damned, don’t worry: most, if not all, of the information can be quickly condensed and skipped without needing to focus on it. But, in my opinion, the framing at the beginning and the end of this game is some of the better written game script that I’ve heard/read in quite some time. 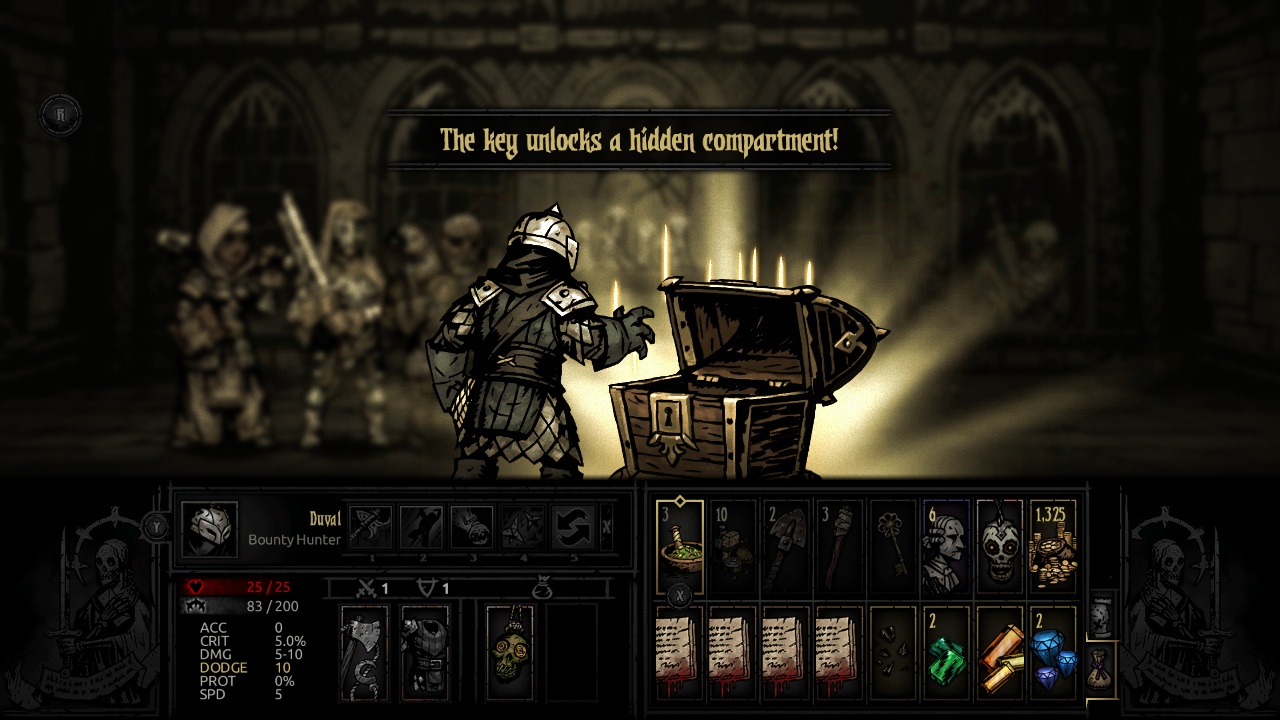 Alright, now that we’ve gotten our feet wet, let’s take a look at the game’s progression. Darkest Dungeon is a sidescrolling crawler that takes a party of four slowly deeper into the aforementioned cursed sections of the Hamlet’s underground. By and by, your heroes will encounter monsters, traps and treasure and have to deal with all of them accordingly. Darkest Dungeon is an oldschool roguelike, meaning two very important things. Firstly, your characters that you hire and dump time into are going to die. And when they die, they’re dead. A quick glance around town shows that there is no resurrection priest, no mortuary where the dead may yet live again. This is a sort of punishing curve that’s along the lines of the classic Wizardry titles, but murmuring and praying do nothing here except waste time. This is gonna be frustrating for many newer RPG enthusiasts, who are used to imprinting upon a single character and always have a phoenix down up their sleeve just in case. Here, the quest, not the bodies, are the most important thing, and, as morbid as it sounds, you just gotta make it back to town with one person left alive so that you can hire more meat shields to keep the story going.

Secondly, it means that you’re not entitled to a damn thing once you get into the crypts. The floorplan is mostly unchanged, but the contents of the room are randomized within reason (see also procedurally generated). This means you might hit five traps in a row, followed by three very large, angry enemies, and you’ll simply get beaten to death before you can even think of what to do next. Others, you’ll have empty hallways that feel suspiciously void of danger, and then find a pack that you assume is trapped but actually carry five important torches. Nice!

And it’s not enough to simply have the strong and the magical in your party. Darkest Dungeon takes an amazingly unique turn by inflicting the weight and the ardor of the quest upon your party members over time. Food is something that you’ll never have enough of, and hunger depletes hit points as well as stress. The torches that slowly burn out affect not only your ability to see things in the dungeon, but also how well your party deals with everything that arrives. And the stress itself is a very serious faction that will change your characters in wildly unpredictable ways. My plague doctor suddenly became incredibly zealous and wanted to do all the fighting himself, despite having no real weapon to speak of. My crusader was selfish and greedy, and looted all the treasure chests we found for himself, resulting in tons of found gold and artifacts lost to his NPC pockets. Getting back to the surface meant that I could use the tavern and the Sanctuary to try and shave some of that stress off, but hiring more bodyguards in the meantime resulted in lost cash and time. Thankfully, everything you unlock in the town stays unlocked, so, when madness and damage takes your whole party and it’s game over, you lose crawling progress, but not necessarily game progress. 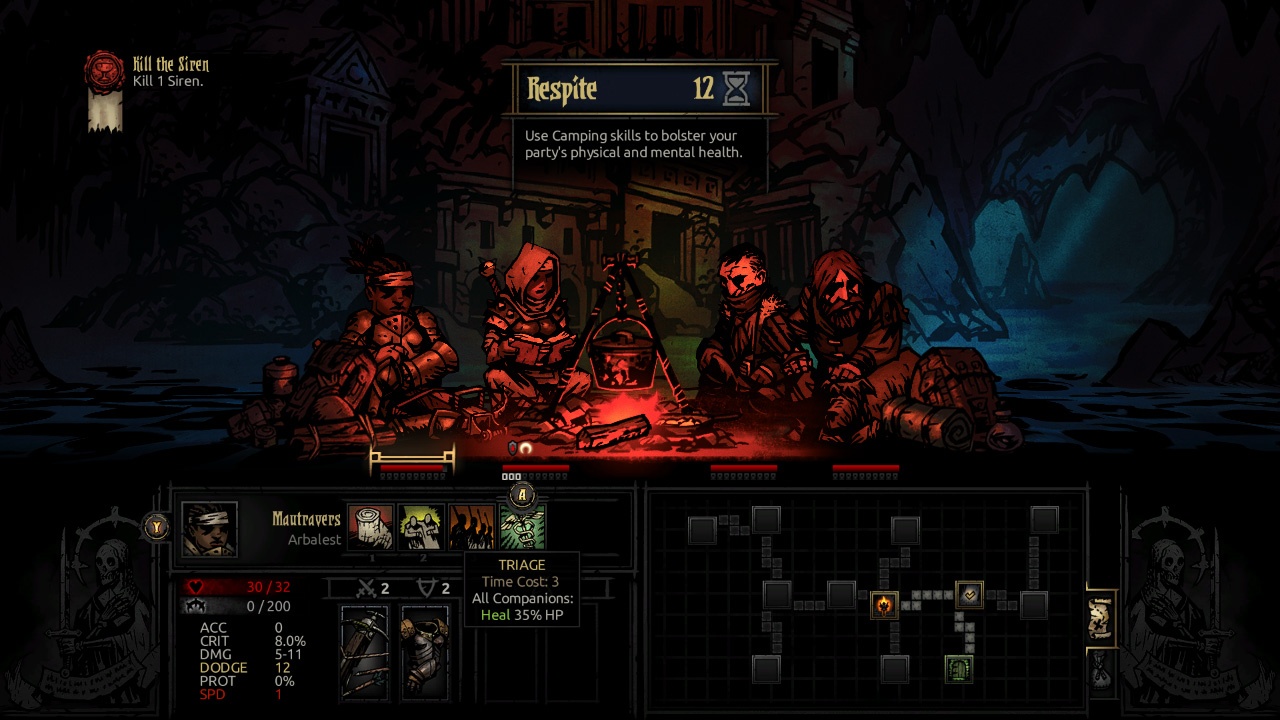 The biggest question on everyone’s mind is how well Darkest Dungeon performs as a handheld experience, and I’m pleased to say that it’s really quite solid and incredible. Speaking as someone with a -6.00 prescription, I had no problem reading the text on the Switch’s handheld screen without needing a magnifying glass. The text, yes, is small, but not illegible. Additionally, the controls are something that I think players are going to have a bit of difficulty with at first. Red Hook Studios did a phenomenal job of assigning buttons and touchscreen controls to most every option, so players might do well by mixing and matching the two ideas to create the best interface. I found that map navigation worked best with my fingers, as well as character selection, but perusing my inventory and combat itself was easier using the physical buttons. In any case, it’s far from impossible to figure out what’s best for you when it comes down to the controls of this incredibly gorgeous game, and it’s worth taking a few minutes to figure things out so you can enjoy this on the go.

And you’re going to want to enjoy it everywhere you go, because Darkest Dungeon asks a lot from the players and delivers even more. With three difficulty levels, a new player might be inclined to scoff and jump straight to “Darkest” because it is considered normal. Don’t. Don’t do that. Try Radiant first, and get a better idea of what the game considers to be easy. Try to make it through a dungeon. Bleed. Go mad. Lose a handful of characters. Fight to the first boss and curse yourself because the Prophet doesn’t care that the healer is at the back, it’s gonna smash her first. Stop and reflect that this is the easiest difficulty and the game is trying to help you, and realize what that means for higher levels. Darkest Dungeon is, in a word, a motherfucker, and it only gets harder the further you go. If you’re crazy enough to try the Stygian difficulty, you’ll have everything that the dungeons can come up with thrown at you with the added “bonus” of a time limit that will actually delete your save game if you miss the window. That’s some nefarious, angry and borderline brilliant sadism that players must be salivating to get behind.

These are the kinds of games that get me out of bed and onto the screen every day. This is the level of artistic design and concept combined with legitimate gameplay and execution that players both need and deserve on the Nintendo Switch, and I’m almost jealous that other consoles could try it first. But, here, in it’s polished, full form with available DLC, Darkest Dungeon is in terrifying, complete transformation, and it’s ready to claim hearts and lives for a whole new group of players who feel they’re ready for the attack. Will you be the one to try and bring light back to this blighted land? Or will you simply be another addition to the ruin ?