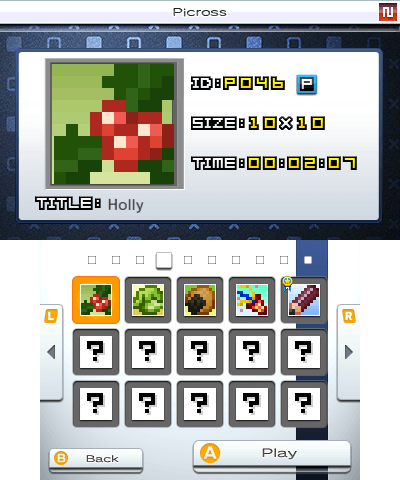 Picross E8 is another entry in the Picross series from Jupitar Corporation. Picross is a picture crossword puzzle game, in which you are presented with a grid of squares with numbers round the outside. Each row and column will have a set of numbers assigned to it and you must use them to work out which squares to fill within the grid. Once all the correct squares are filled a pixel art picture will be revealed.

Picross E8 doesn’t add anything that isn’t already present in Picross E7. E7 contains a good variety of modes and all of these are still available in E8. You have the standard picross mode with 150 puzzles to complete; there is a Mega picross mode with 150 puzzles, each one containing numbers that spread across more than one row or column. Lastly there is a Micross mode with a total of 3 puzzles, each one is a giant picross grid consisting of 64 smaller picross puzzles. After doing the maths, that’s a total of almost 500 levels for you to complete, that’s a lot of hours of picross to enjoy. 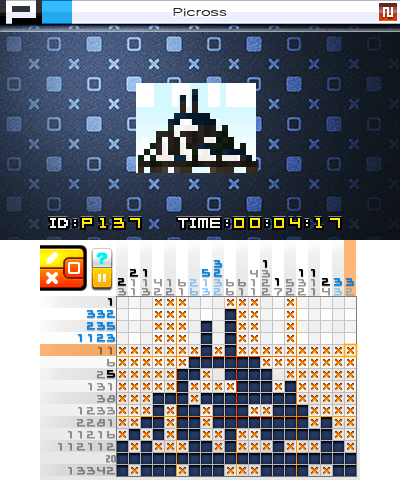 It’s a real shame that there wasn’t anything new introduced to mix things up for this entry in the series. A new mode or functionality would have made Picross E8 feel a lot more justified. All that has changed is the puzzles being new, which isn’t immediately obvious as it’s just a grid and some numbers. Once completed though you can see by the picture that they are indeed entirely new puzzles.

The game’s controls are very simple, giving you the option of using the stylus or buttons to navigate around the grid in order to fill it in. The rules for picross are equally simple and with a very user friendly menu and tutorial you’ll be flying through the levels in no time whatsoever. 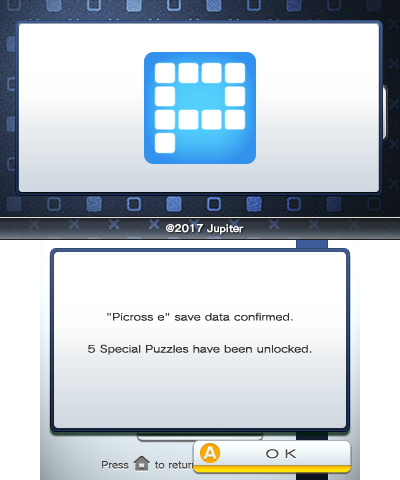 As for difficulty the game is fair but challenging, ramping up by increasing the grid size as you go. You’ll start off on small 5×5 grids which will take seconds to fill and ramp all the way up to 20×15 grids that may last you a good 30 minutes to complete. It’s important to note that the ability to save mid puzzle is available and is essential for some of those tougher grids; allowing you to tackle them in shorter bursts if necessary.

Picross E8 is a solid picross game with plenty of content and a good variety of different modes to try out. The game disappoints by lacking in any new content compared to its predecessor but with simple and tight controls and a fair but challenging difficulty you can’t go far wrong with Picross E8 if you’re a picross fan.