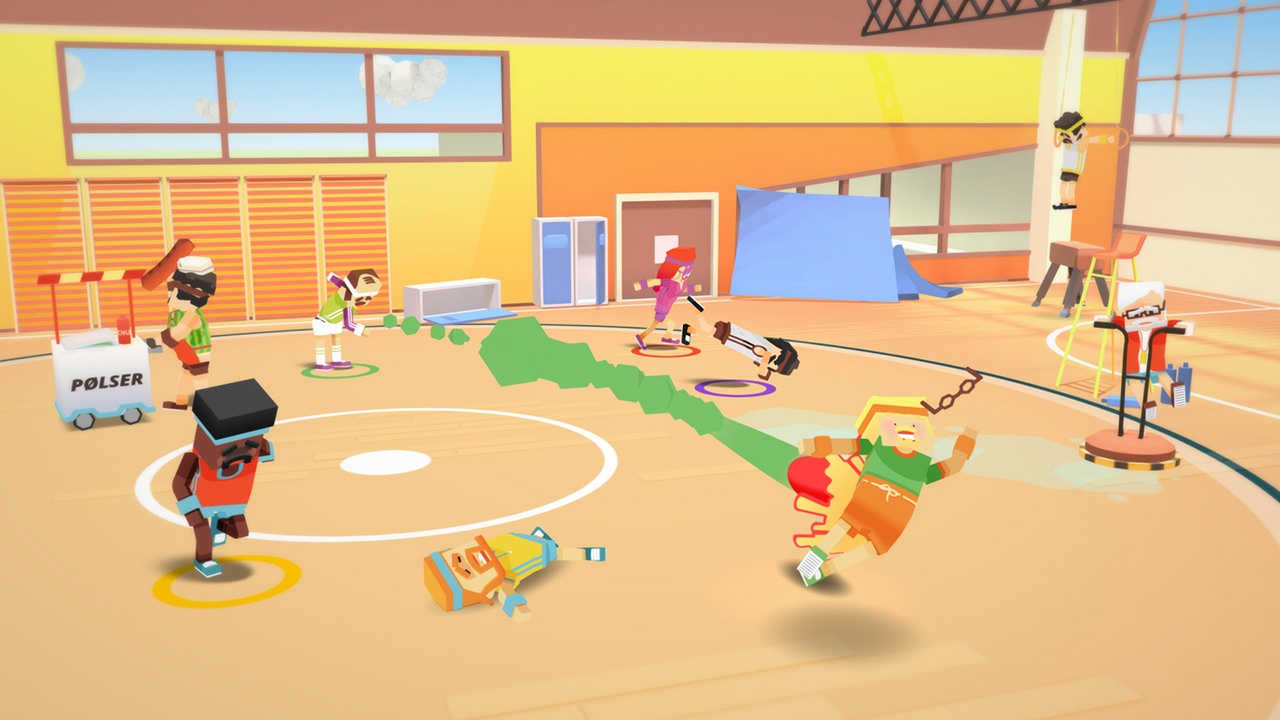 The iconic movie Dodgeball: A True Underdog Story is one of those films that is simultaneously bland as hell, incredibly relatable and strangely quotable. When you really deconstruct it, there’s a lot of simplicity that was rife in comedy films in the early 2000s, but that neither excuses the more boring moments nor does it overshadow the genuine laughs that get generated from some iconic scenes. But, most importantly, it reminded people that dodgeball is a real sport, and, even though we may not be watching it on the Ocho, it’s identifiable and played all over the world. Perhaps in Europe the sport is even more a mainstay than I realized, because I haven’t seen a dodgeball related video game since the SNES days, but the folk of Game Swing wanted – nay, needed – to create a modern dodgeball adventure. So, without further ado, let’s dive into the world of Stikbold!

Stikbold is more of a party game first and a solo adventure second, but the solo adventure is necessary to unlock extra characters and to also fully appreciate the world as we know it in the game. A story mode expedition puts you in the shoes of Björn and his teammate Jerome as they prepare for this year’s dodgeball championship and bringing back their pride/rank as the best of the best. Last year, Björn was distracted by a sultry dodgeball vixen by the name of Heidi, and they won silver instead of gold. This year, as the final match approaches, Heidi and her teammate are kidnapped by a dude in a devil outfit. Though coach wants to simply accept their abduction as forfeit and declare his team winners, Jerome and Björn would rather win honestly. So, with the clock counting down to their automatic victory, the duo sets out to rescue Heidi and win back their glory in an honest and hardworking way. Of course it’s absurd, it’s a video game about competitive dodgeball, let’s just have fun with this. 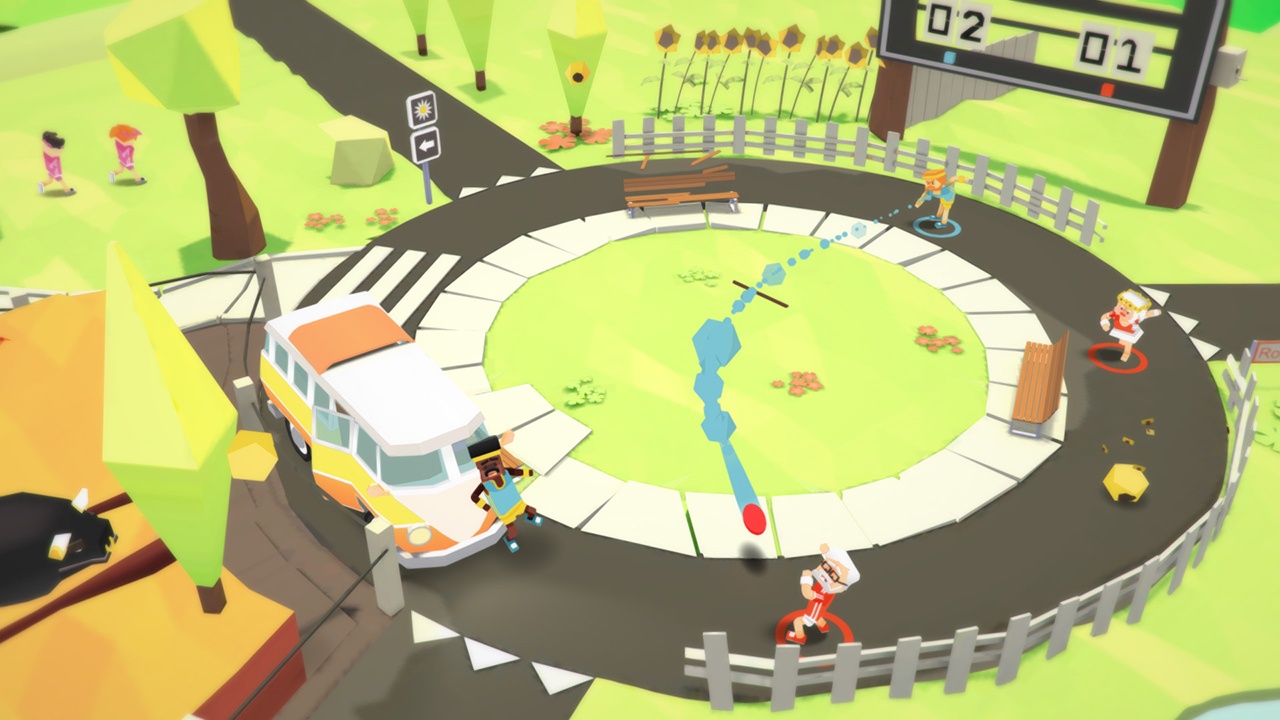 In fact, if you like the goofy and strange tone that sets up the main story, then you’re going to love Stikbold! from start to finish. Though there’s nothing that quite reaches a level of “zomg random” (thank God), there’s plenty of offbeat moments throughout, and that’s mostly held in place by the fact that everyone, everywhere, settles things with a game of dodgeball. Gang of hippies won’t help you out? Dodgeball! Lifeguards unhappy with the way you’re treating their beach? Dodgeball! Green Peace knockoffs trying to sink this dude’s boat under the supposition that whales are more important than people? Blow up the whale then dodgeball! This is a game that’s fully dedicated to its own insane idea from start to finish, and it never, ever wavers from that central idea of dodgeball. The fact that there are bosses, like in a real RPG, that need to be dealt with through dodgeball, is just fantastic. Although a lot of the human conflict could easily be settled through communication, currency and consistency, throwing balls at each other just makes for a better game.

Story mode won’t eat up a ton of your time, but it will enable some really great moments of play overall, especially for the future. For one, it will help you master the twin stick technique of playing dodgeball, which is all about moving, aiming, throwing and dodging. Since opponents gradually get more difficult as you play through, the story mode perfectly shapes your techniques so that you can do better later on in the other modes. Plus, you’ll unlock new characters (purely aesthetic, no bonus dodge skills here), have some cool mini games that you wouldn’t normally see (did you think I was joking about the whale?) and enjoy the wacky ride of Björn and Jerome from start to finish. Plus, you can do the story mode with a friend/loved one, which I highly recommend. The one downside of the game is that, since you’re only one person, the AI teammate needs to really pick and choose certain things, and it never, ever chooses to throw the damn ball when I want them to. Instead, they’re always passing it to me and getting hit by waves or buses or whatever else is inconveniencing the stages. I can’t yell at a computer, what am I, my grandfather? So at least have a friend there so you can curse someone out while you have to stand stock still to get them back on their feet.

The dodgeball action itself (which is the entirety of the game, regardless of mode) is incredibly fun and shows off some real skill when you start to get better at the game. Getting hit once isn’t a guaranteed out, but it will slow you down and make you an easier target for that second kill shot. You have up to a team of three, and this is where the Deluxe part of the game’s title takes place. Game Swing decided that the Switch, with an inherent multiplayer feel, should be able to have three on three action, and it works wonderfully on the big screen. Playing in handheld/portable mode is totally plausible and there’s no issue with controller communication, but it’s simply a very small screen for six people to all stare at, especially with how fast the action moves. Not to mention most of the stages have little extras happening (falling rocks, beehives, water), so keeping track of all of that is just much better up on a television. But getting knocked down doesn’t mean game over as long as your teammates can revive you without getting killed themselves. It’s hazardous, it’s high octane, and it’s a terrible amount of fun. 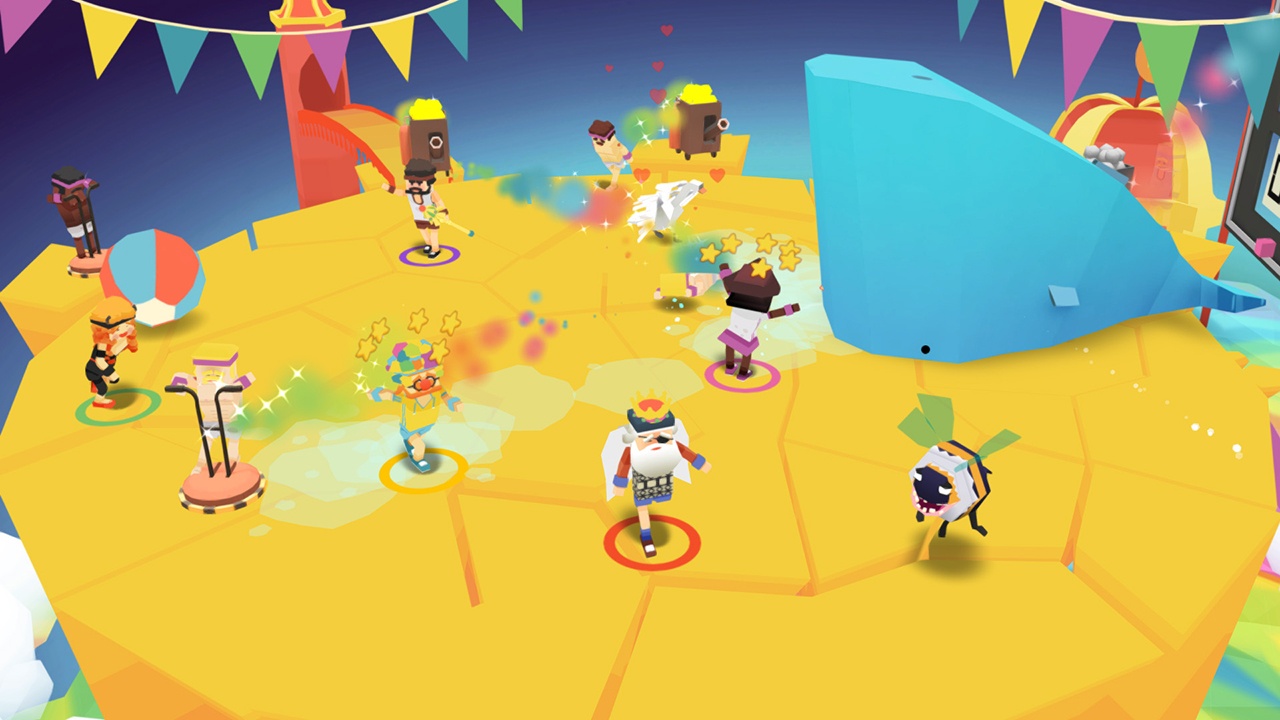 Besides the six player action, Stikbold! Deluxe also incorporates a new Wheel of Rumpus feature, and I kind of love this thing to death. Channeling their best interpretation of a 1970’s game show, you favorite characters take part in a wheel of mystery to decide the when and where of their next dodgeball showdown, and the winners get…chintzy accessories for their characters. Win everything to be…the winner of chintzy accessories. It’s hilarious and fun, and is actually the perfect solution when you want to play a few rounds but don’t want to manually decide every aspect of the how and what you’ll play next.

What ultimately makes Stikbold! a repeat experience is the essence of charm and genuineness. The game moves forward in every avenue with a giant smile and a total dedication to what it’s doing, and the blocky artwork and upbeat soundtrack only add to this. Had a dodgeball game been made in the US, much like the movie, there would have been undertones of derision and snarkiness that may have appealed to some but would have taken away from the overall tone and message. There’s no insincerity within Stikbold!: just dodgeball, from all angles, at all times, and done in a really spectacular way. One thing that always brought me back to Super Dodge Ball (the best dodgeball game to date) is that it took itself seriously while focusing on the gameplay and mechanics. Stikbold! goes one step beyond that and injects some personality and heart, bringing you not just a game, but an experience. If you have any room on your Switch for something a bit offbeat but totally rewarding, then put down the bat and pick up a ball: it’s go time.