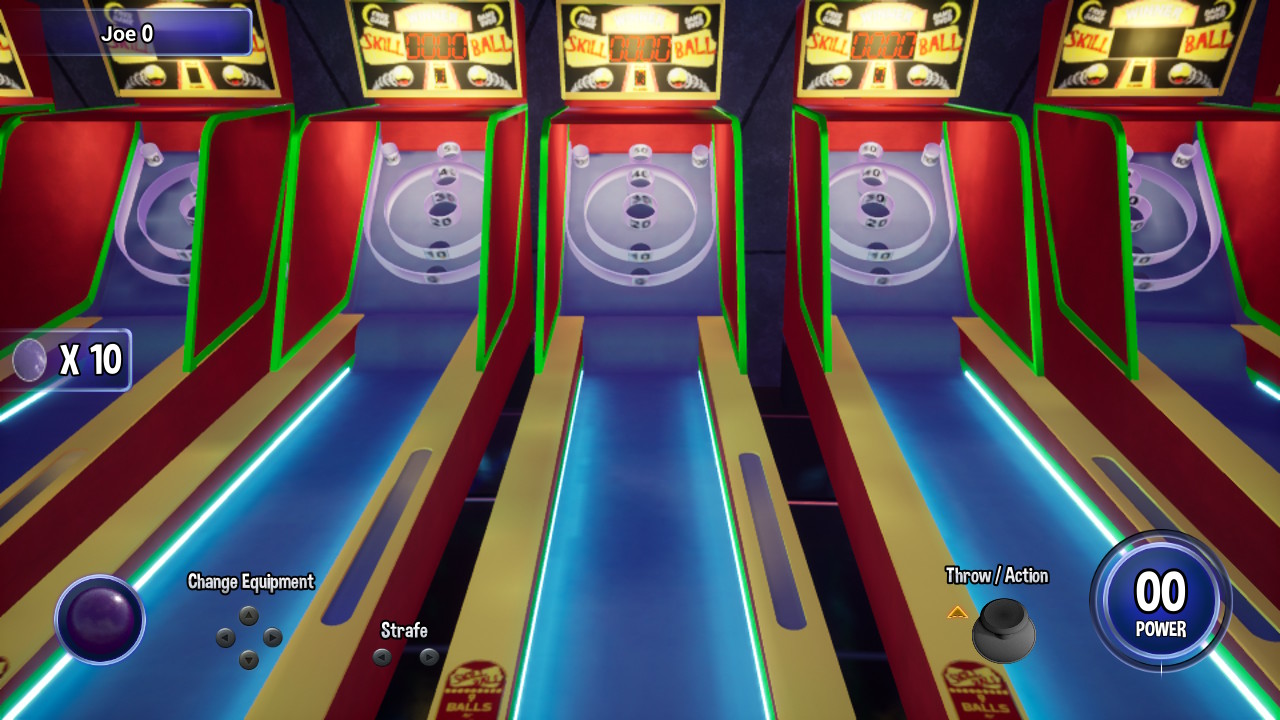 On paper, Party Arcade seems to be the perfect fix for people out there looking for some classic and new style games to play with friends, family and strangers alike on the Nintendo Switch. It’s got a pretty decent plethora of activities that cover any range of play styles, from single player to multiplayer, and it does give the appearance of having something for everyone. You’ve got a Skee-ball knockoff, some billiards, a bit of ping pong and loads of other games that emulate a lot about the Game Center experience. You can play in a tournament of your own design, do local or online playing with friends, and even use tickets for some cosmetic additions to the game. Unlike some other carnival/arcade type games that I’ve played in the past, there aren’t any silly “prizes” that can be bought with the tickets: you can only put them into little affectations to make the game more colorful in your own perspective. I personally recommend investing in some new balls for the skee lanes,  because that’s where I spent most of my time after touring the arcade.

Things are supposed to execute in a motion control manner for a majority of the activities, which makes sense. For example, with something like darts, they used the tried-and-true method of swinging the Joycon while holding and then releasing a shoulder button. While far from perfect, this methodology has proven effective in other titles (including recent Mario Party games), and is vastly more enjoyable and superior to the button configuration. Farsight Studios decided to map nearly everything to the right joystick, which is such an odd choice. In order to shoot, throw or do other actions, you usually need to hold back on the right joystick, then flick it forward. It’s truly bizarre, especially with things like hockey bowling (a combination of air hockey and bowling). The result, interestingly, is that I was really, really good at those free throw arcade games and really, really terrible at being able to make proper billiards shots. 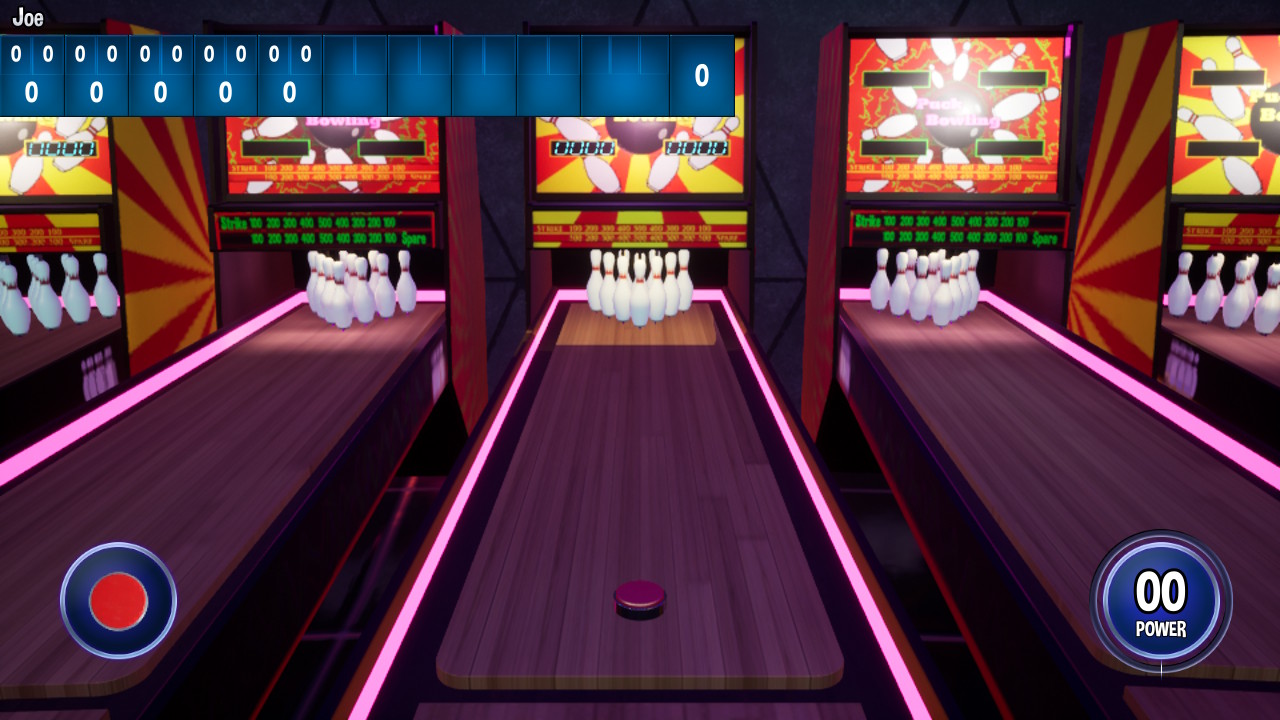 You’ll notice a lack of witty preamble or relatable anecdotes at the beginning of my review, and there’s a reason for that: I just need to get through this review. Often, with games, I can find a bit of something to latch onto and hearken back to my days of childhood gaming, or connect to things happening in the current gaming world, or even find some goofy parallel to misdirect before dropping into the main meat of things. The sad part is, Party Arcade is just bad. And I mean that from someone who plays predominantly indie games in my free time, looking for the diamond in the rough and still finding some appreciation for the rough itself. Party Arcade is something that could have easily re-corrected its route in a handful of ways, but never got around to doing so. Things like really base graphics and simple sound aren’t necessarily a problem, but they’re brought into sharp focus when you have a mode in which you walk around the virtual arcade itself, looking for the games. Then you see that, outside of the main activity designs, everything supposedly takes place in a dark, dank, neon-soaked den where you’d expect serious crimes to be occurring just out of sight. But don’t worry, you’re not here to score: you just really want to play Plinko.

This immediately brings me to another huge problem. Those tickets that I mentioned before have their uses, however limited. Then there are…the other games. There are a handful of activities that make up the thirteen games you can play in Party Arcade that are ridiculously, insultingly limited, like the Slot Machines, or “Disc-O” (which is a variant of The Wall or Plinko from The Price is Right). These activities, by themselves, are fine, albeit nonsense and simple ticket machines. But you can’t just simply play them. Every turn on these games require separate tokens, which you get from completing other, non-token games to a certain degree of success. I achieved a bronze ranking in billiards, which meant that I didn’t totally suck out and delivered a decent amount of win. The result was a whopping five tokens, which equaled five spins of the slot, two drops of the disc, or a single go at “Stop Light,” that asinine game where you push the button to stop the LED as it whirls around the table. These games are meant only to hook kids into trying to win easy tickets (and, for the slot machine, to start that long road of gambling addiction). Granted, the tickets can be used to unlock “challenge mode” for some activities, but these are unlocks that are in the thousands: wasting all my tokens rarely netted more than 20-40 tickets. In a game with a skeletal number of unlockable prizes in the form of extra game modes, these token titles are a true waste of time and mean to fill out a mediocre array of activities into something deceptively more robust.

Playing this game on the go was a nightmare. Even when I was in airplane mode, every single game I tried to play was book-ended by nags to try to get me to turn on the wifi because it was SO GODDAMN IMPORTANT that I share my Bocce Ball high score with the world. When I wasn’t in airplane mode, every failure to find a wifi connection inside the commuter line would result in it launching the wifi connect screen, trying to scan the dorms of Brandeis as my train went by, desperate to tell SOMEONE my Corn Hole score. It was so damn infuriating and honestly anxiety inducing that I ended up refusing to continue to play this game while commuting to and from work. I’ve got enough waiting for me at the office, I don’t need to also feel like a failure for not providing my own pocket wifi. 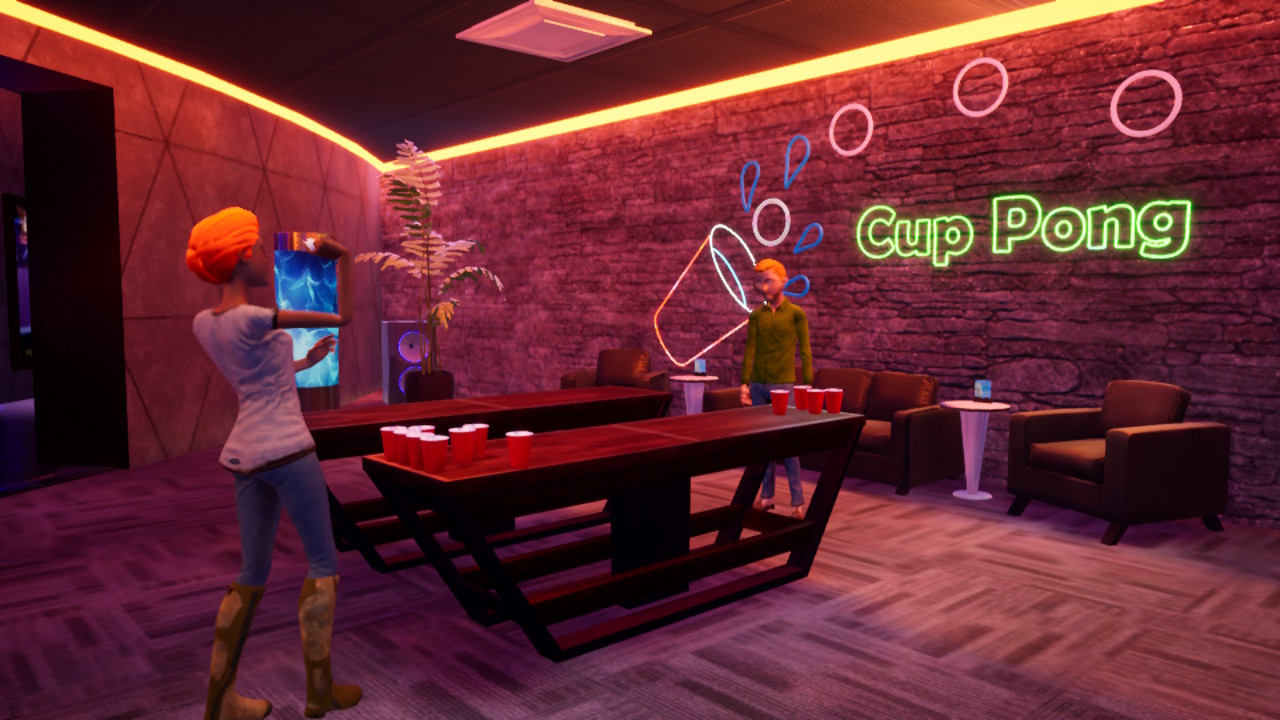 But all of this, ALL of this, pales in comparison to the simple lack of easy and acceptable multiplayer. “Elliott, you said there was multiplayer!” you bray in protest. Yea, because I set things up to appear the way the game packaging looks: like something might actually be good. Yet, in order to enjoy a simple versus game of Ping Pong with your son, daughter, brother, sister or literally anyone else, that person not only needs their own Nintendo Switch in hand, they also need to have their own copy of the game. This is some serious bull hell, on levels that I can’t even paint properly. To play Ping Pong against someone – a game that can be played with two books and a ball, if you’re desperate – you need to have two Nintendo Switches in the same room, two copies of Party Arcade, and enough boredom with LITERALLY EVERY OTHER TITLE OUT THERE to resist playing against each other with those other games. The logic is insane. I have a better chance of plucking a stranger out of a crowd and them having Mario Kart on their Switch and racing against them than finding anyone else with Party Arcade. The only way this could work is if I bought a second copy, gifted it to someone who I didn’t mind losing their friendship, and then nagging them to play Cup Pong, which has all the disadvantages of beer pong with none of the drunken benefits.

The entitlement of Farsight Studios for expecting this game to work is baffling. There are two good things I can say about this game: the install size isn’t too big, and it’s already being slashed in prices everywhere online. This isn’t even a fascination buy: this is a grief present, ready-made and wrapped for people you don’t like. The Troll and I has a certain B movie appeal, whereas Party Arcade is a sin against children and grandparents alike. You can buy the supplies needed to play many of these games for less than the MSRP of the full title, and everyone has a friend with a pool table in their basement. Deeply, truly consider what it means to support this kind of game design before purchasing.

I can’t tell if I should laugh or cry at the fact that this pile of unkept activities costs thirty dollars.