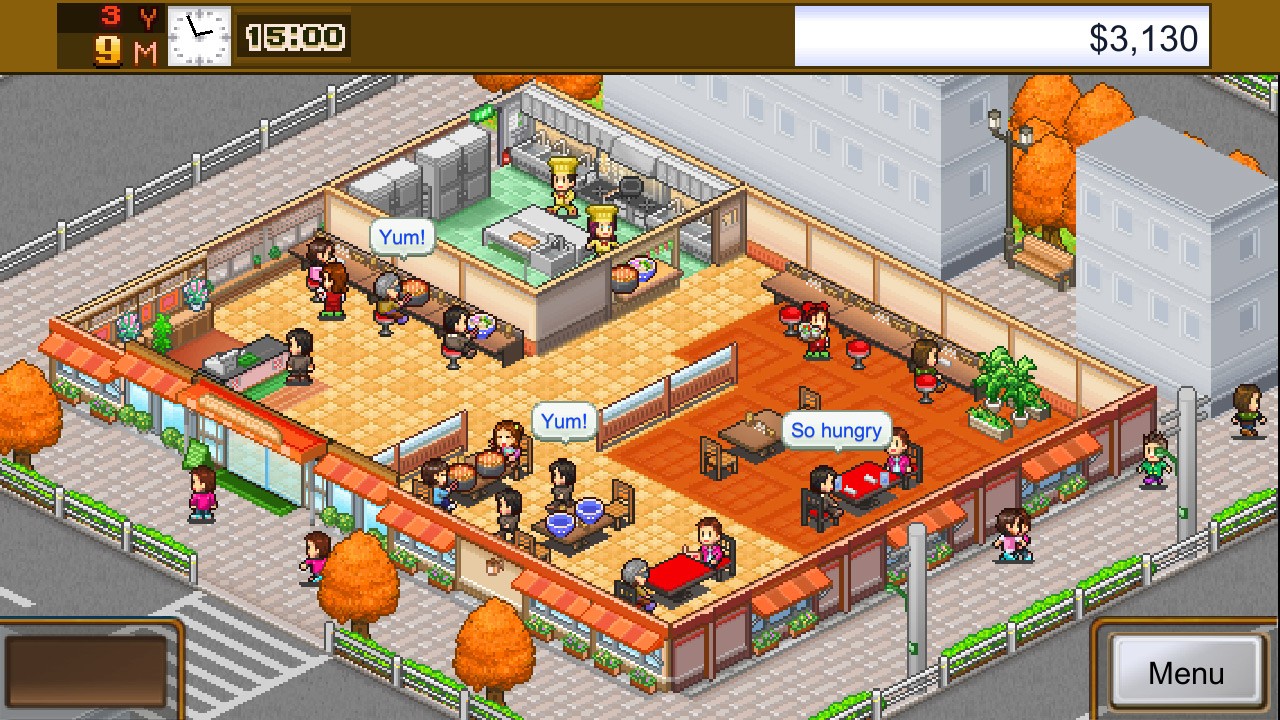 Kairosoft has done it again, taking one of their mobile games and porting it onto the Nintendo Switch. This time around it’s Cafeteria Nipponica. Just like the usual Kairosoft games you are in charge of running a business or organization of some sort. In this situation, a restaurant. Your goal is to build and expand your food empire. The game starts off pretty slow though. In the beginning you’re given your first restaurant. What you can do, starting off, is buy and place new tables, add furniture and hire new workers. Be wary though, when the game starts you don’t start off with much money to begin with. In this game, it doesn’t take too much too end up in debt. I found the best strategy is to first hire more staff and just grind out more cash until your stable enough to buy more things for your restaurant. 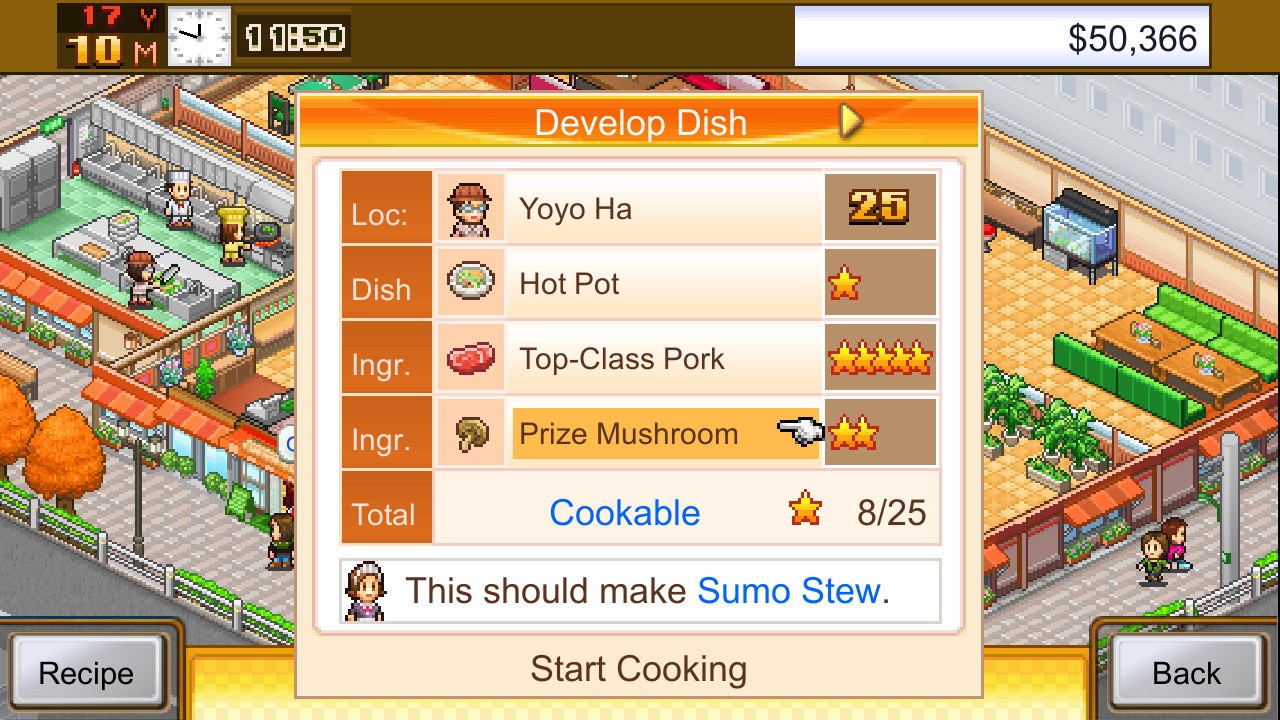 Speaking of staff, as you progress in the game you are given the option to recruit special staff onto your crew. You play a button-mashing, tug of war-styled mini game where you have to convince the applicant to work for you. The problem I have is you have to give away your money to recruit them. For example, I tried to recruit a Gordon Ramsey knock-off chef, but I needed to give him like $10,000 and I would end up in debt. If you were to be cautious about recruiting him you would run out of time and he would turn your offer down while still taking the money you offered him. Way to rub salt on the wound. The biggest feature in the game is developing recipes. Your able to send your workers out on expeditions to hunt down new ingredients for various recipes and it’s your job to see what works with each of them. Combine the right ones and you can discover a whole new dish to serve to your customers. With this function there is a lot of trial and error which does get pretty tedious and do run a risk of either increasing and decreasing the price, appeal and taste of your dish. A critical factor to think about when your experimenting with one of your popular dishes. Once you’re well off, you’re given the option to either expand your current restaurant or open up another one, to expand your brand. The problem I have with opening a new restaurant you have to rehire all the workers. With the first restaurant your given a starter crew but with your second restaurant you need to start from scratch. 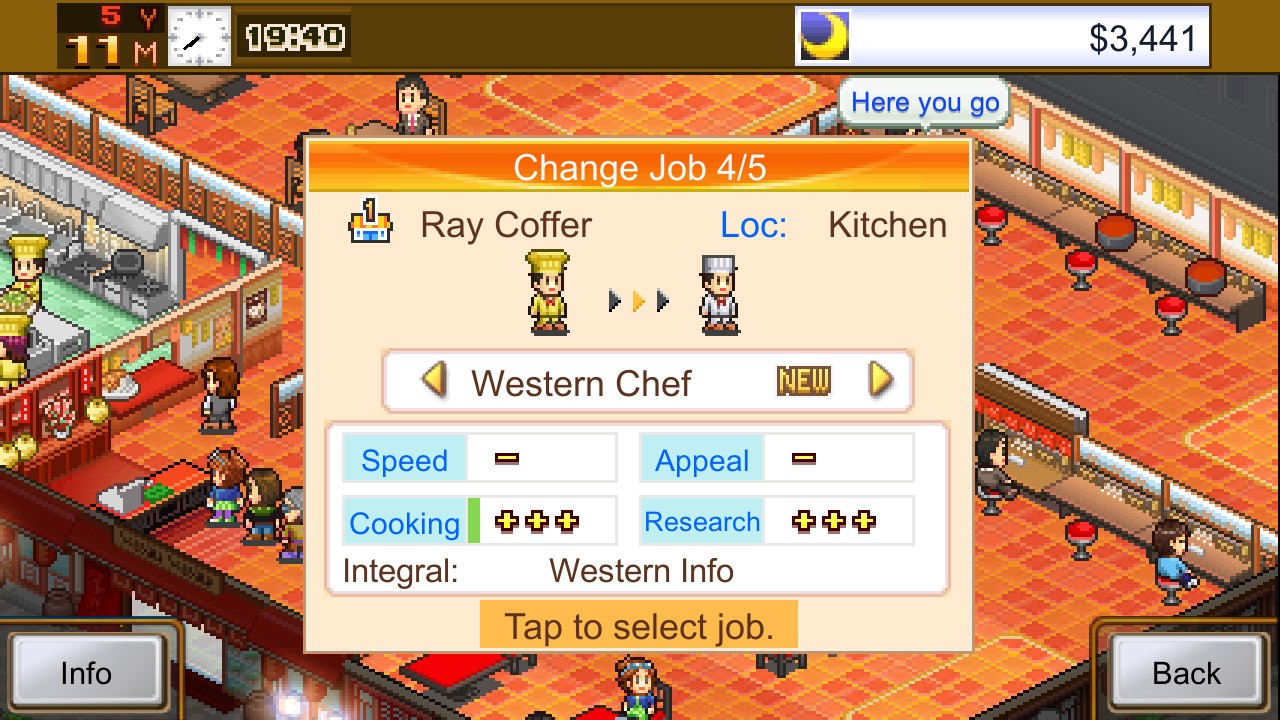 Now this wouldn’t be a problem if it just wasn’t for the hiring system. Your only allowed to hire 1 employee per day and having a restaurant with only 1 cook or server isn’t good for business. You’re better off just expanding your restaurant and grinding to earn all that money back you just recently spent. Something minor about the game I also didn’t take liking to, was that the character models are heavily reused in this game. In the other games you might see at most 2 of the same characters on the screen at the same time, but in Nipponica you’ll see at least 5 exact copies of the same character. It was just off-putting for me. Its weird to see the variety of characters from previous games be stripped away in this one.

Without a doubt Cafeteria Nipponica is one of the slowest Kairosoft games next to Pocket Academy. It’s one of the more in-depth games in the series, but it still ends up falling a little short. It’s satisfying when you finally get your restaurant up and running, discovering that steady flow but until that moment comes, you’re going to find yourself constantly grinding and this is what makes the game lose its fun factor. At its current price on the E-shop for $14.00, your better off purchasing one of Kairosoft’s other popular titles.