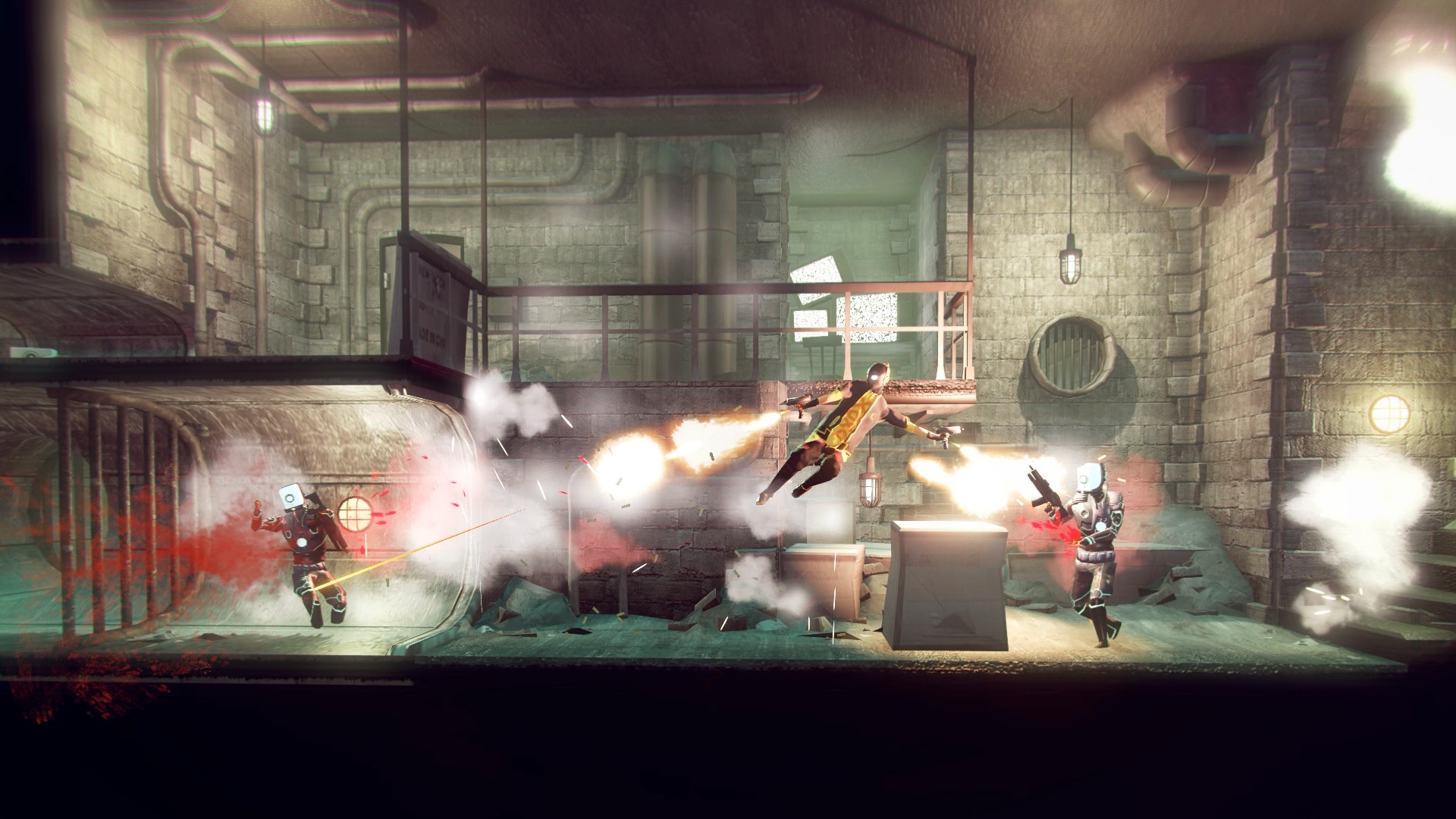 My Friend Pedro is a successor to the original title which believe it or not was an Adobe Flash game in 2014. The game was that popular that the decision was made in 2015 to develop a full blown indie title of the game which would evolve and launch this year. A long four years down the line by developer DeadToast Entertainment and published by Devolver Digital. The game has been developed with the Unity engine which has served some successful titles such as Cuphead, Inside and Ori and the Blind Forest being amongst its portfolio.

My Friend Pedro is essentially a score attack game but in a massively unique way. Its all about killing enemies and maintaining a multiplier whilst doing so but being brutally bad-ass whilst engaging in this gory mess. Whilst the soundtrack keeps your adrenaline high with its techno beats you can control your character by using slow-mo and bullet time to engage enemies by pulling off cool stunts like back flipping off a wall, swinging from a rope and crashing through a window whilst extending both arms and popping a bullet through bad guys either side of you. The beauty of the levels and the design of the game makes it possible to keep replaying as the outcome of how you played it out won’t always be exactly the same. 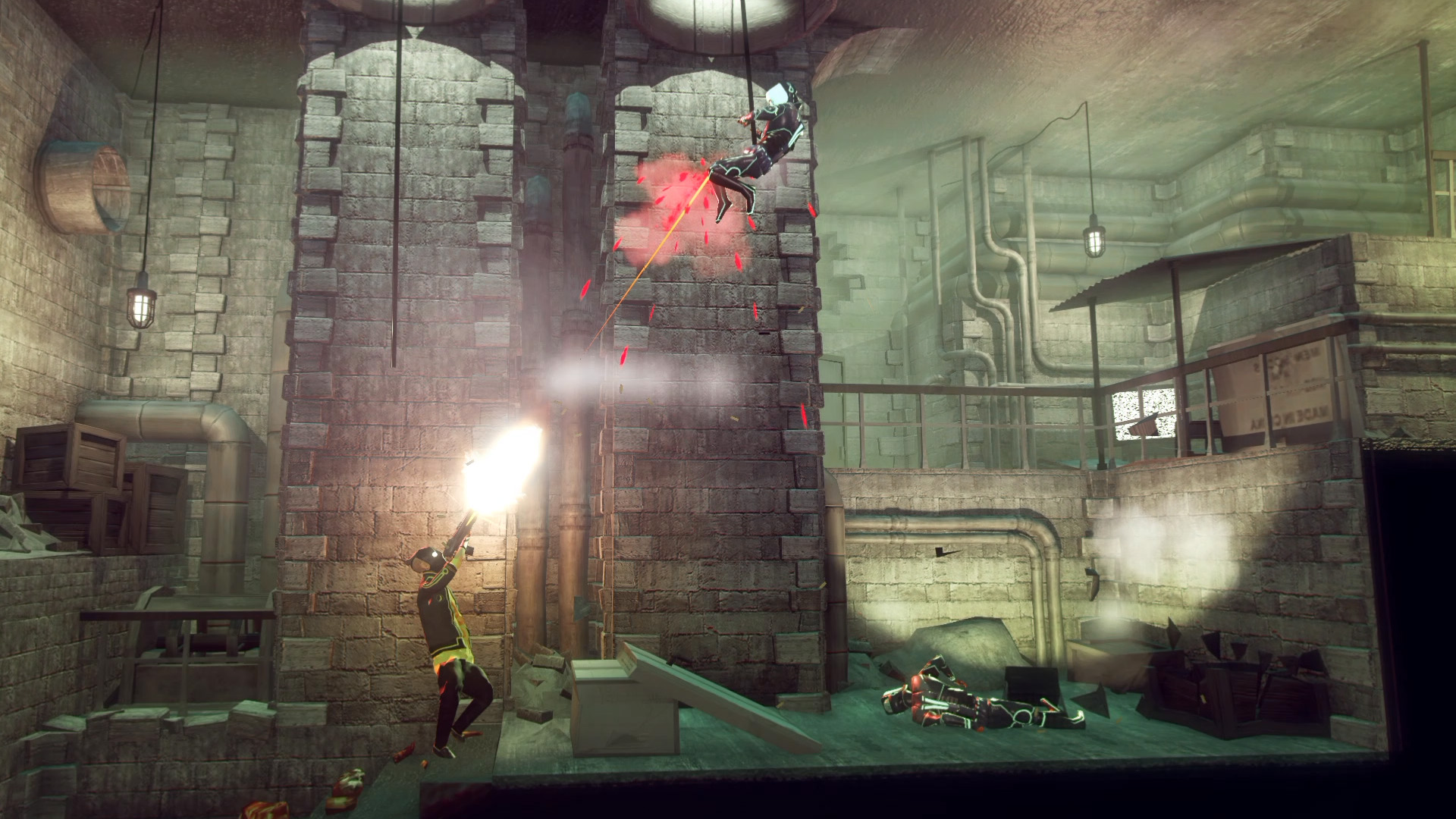 There are hundreds of moments like this and it left me grinning from ear to ear. It almost makes you feel like you’re binge-watching a really good TV series, as when you finish one level you want to see what different insanely fun moments you can have in the next. Whilst the game is fairly short at a four to six hour playthrough, the mechanics stop the experience from becoming stale and leaves you wanting to play it more. At the end of the experience I often went back to play the levels I really enjoyed just to get that exhilarating “Matrix” feel.

I don’t want my words to spoil the game and its flow for you, so I will say that the game, as it continues in, throws new experiences and obstacles into the mix to make it more of a challenge; but in a fun way and the time doesn’t feel like a chore. Looking past the bullet time and the slo-mo, the controls can be a little tricky to get the hang off on the first couple of levels and occasionally the animation of the game can be a little off but these are a minor hiccups.

Great fun was to be had with the small arsenal of weapons at your disposal and it never became mundane using them and trying different styles of gunplay. Either trying to pick off enemies at slightly longer range with an SMG or letting them stare down the barrel of your shotgun as you blow their brains out. But let us not forget if you fancy being Connor Mcgregor on a Friday night in an Irish pub full of blokes declining you whisky, then of course you can use bare fists and your feet to melee thugs.

If you’re looking at a story driven game then I would look straight past this one as you’re not going to get anything out of it that satisfies your mind if you get off on story based games. Your character is anonymous and doesn’t have a voice and you have a talking banana, yes you read that right. Who follows you’re every step and encourages you to do bad things. If you ever wanted to live as a schizophrenic for a few hours then you’ve found the game for you. Now the banana Pedro does crack some one liners and I will leave it to you the gamer to decide if they tickle you or you frown at the lameness.

Story aside this does not spoil what is an absolute enjoyable journey of carnage and mayhem which leaves you both satisfied and wanting more. There are cutscenes throughout the game but they are very brief and won’t get in the way of you wanting to just crack on and flip some more. There unfortunately is no multiplayer aspect in this title but to be honest it doesn’t really require it. There are however high score leaderboards if you love to partake in being top dog and getting the best times and scores. If this is you then you’ll extend your longevity that you may even develop schizophrenia from a banana and you might dodge the fruit and veg aisle next time you’re in Asda (Walmart for you Americans). The one aspect that could have improved the game would have been some sort of cosmetics or unlocks for completing and hitting the achievements. For you cheevo hunters all of them are very achieveable and you may need to run through a second time to bag some.

Graphically this game is sound and performs well with everything going on at once and the structure of the game fares well. For a 2D platformer you really don’t really note the graphical element as it engrosses you so much into what you’re actually doing

Should you play this? Well if you’re on Xbox then at the time of writing its available on Xbox Game Pass so why you still reading? Why is it not even been played or downloaded yet? Seriously go and play it. I wouldn’t regret buying this title either its one of the best indie titles I have played and I would put it in the calibre of games like Inside, Limbo and Cuphead in that trophy cabinet of solid indie titles.

My Friend Pedro makes its mark as one of the best indie games of 2019 and up there with the best of the bunch on Xbox One. Its adrenalin fuelled exciting gameplay with upbeat music make it not only addictive to play it makes you want to come back for more

Great soundtrack that adds to the experience

Shorter than some would hope

Requires some skill to gain the best results