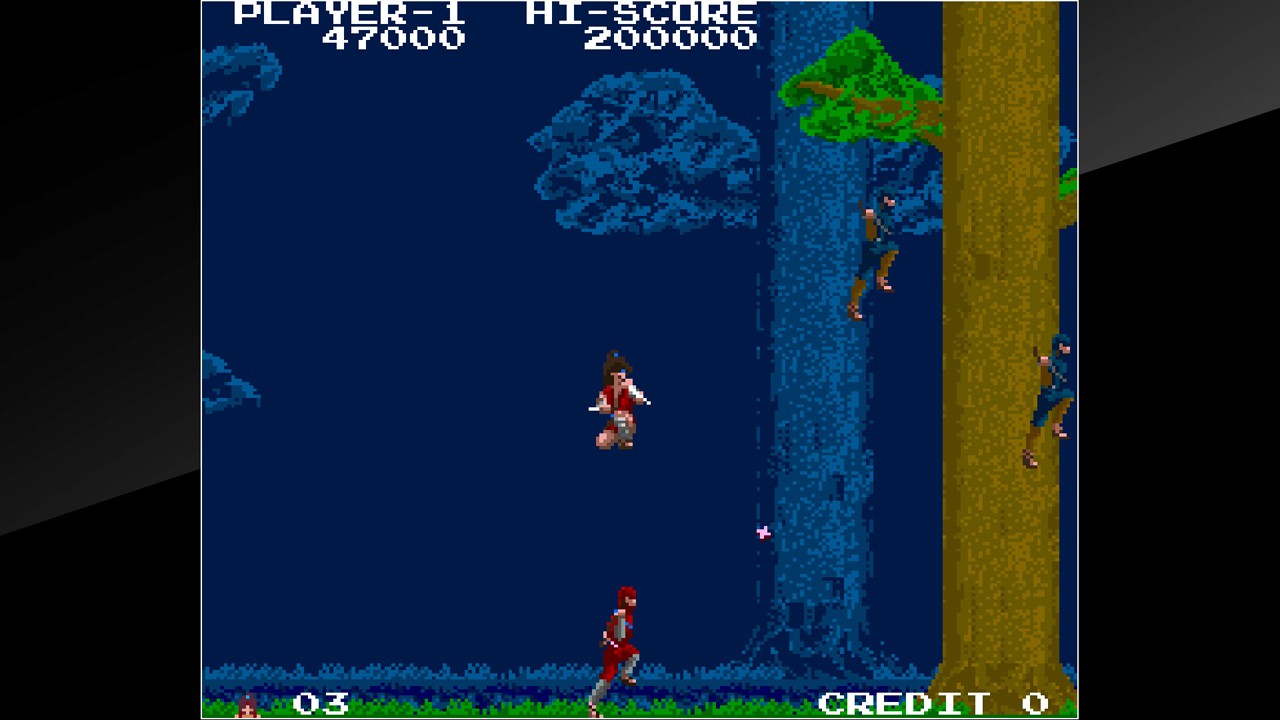 Honestly, there’s nothing more gut-wrenching than to realize that a game from the past simply wasn’t as good as you thought it was. We’ve seen our fair share of titles that came out on old systems that weren’t great then, definitely aren’t good now, and no amount of rose-tinted lenses will change that perspective. However, we often look towards the past to draw inspiration for projects and games for the future, and tripping over old stones can open up fresh wounds. With a company like Taito, it can be really hard to see something not great and not aged well, because they did give us so many memorable times and titles (Bubble Bobble is the longest I ever cooperated with my brother in a video game). There just isn’t a doubt in my mind, though, that Legend of Kage has not aged well.

Firstly, we are looking at the arcade version of this title that received several home ports, so you need to keep some things in mind. It’s going to look pretty damn good, and I can’t discount that in any capacity. The color scheme and designs of the different characters are quite good and detailed, and I was surprised how popping the creation of the kidnapping Mikoshi was in the very beginning. Moreover, since you get to see this game through different seasons, it’s really cool to notice the subtle differences in weather and the trees as you consistently save your beloved princess again and again from the evil warlord and equally evil samurai. Oh, right, I sort of buried the lead by not mentioning the plot or gameplay at all, but I wanted to start with something very positive about Legend of Kage and that was the kindest beginning. 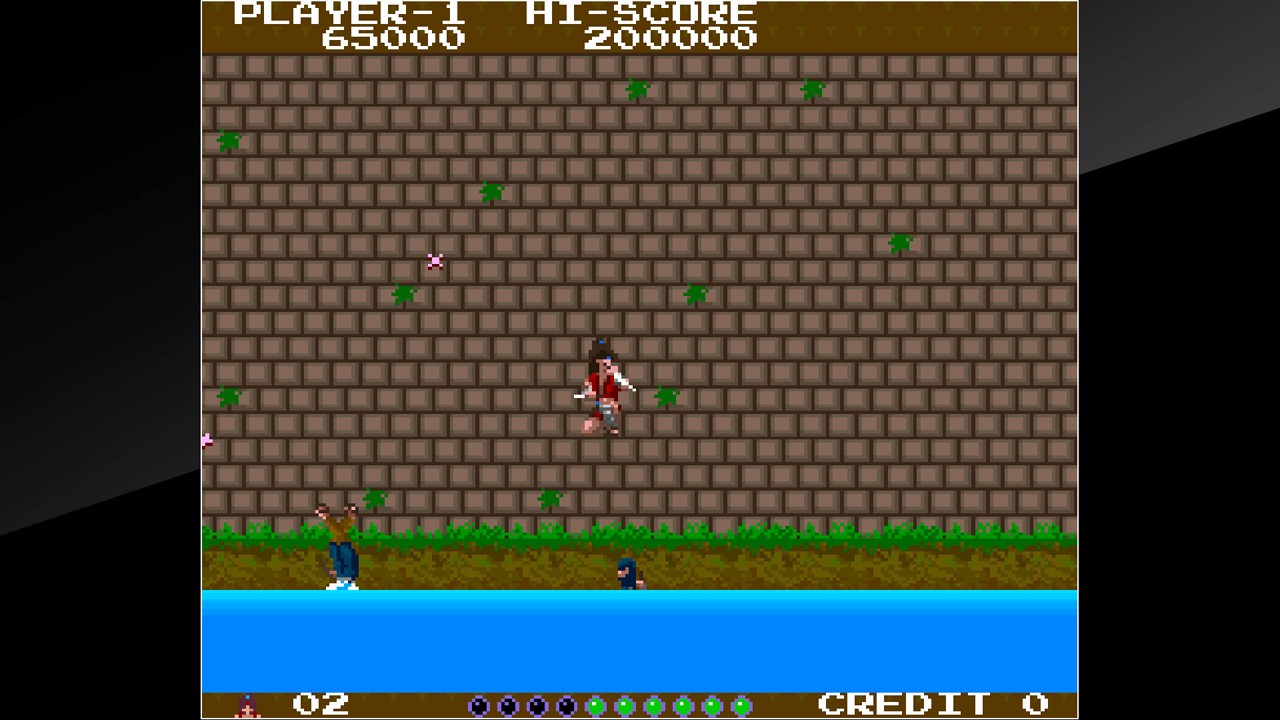 The story is…silly. You play Kage, the titular ninja, and you need to save Kiri, the princess, from Yoshi (bad warlord) and Yuki (bad samurai). You gotta run through the forest, along a riverside, climb up a fortress wall, enter the castle, and then get the princess. Those are four distinct stages, by the way, and each can last as long as three minutes and as little as about one minute. And once you get to your princess, you promptly watch her get whisked away, and you then wait a whole frigging season before attempting to get her again. Like, how much of a nonissue is it that your girlfriend gets kidnapped that you wait upwards of three full months before attempting what amounts to be a ten minute endeavor again? I get it, we want to show that foliage, but I still think Kage could be trying harder.

The gameplay is side-scrolling (or vertical scrolling) as you move and attack. It’s important to note that Kage has unlimited shuriken and, as a result, I don’t know why you even bother to use your short-sword, but it’s an option. You run from side to side, and pressing up on the joystick flings you into a wild and ridiculous jump that has an insane trajectory. You either need to kill a magic number of attacking ninjas or simply reach an imaginary goal post that signals the end of the level. You can die three times before the game is over, so feel free to experiment with how crazy the AI is. Meaning, this is one of those odd games where you can run into some NPCs and not get hurt as long as they weren’t in the process of attacking you. That seems like it should be a good thing, but it further separated me from the “reality” of the story as I bounced off of different coloured ninjas that should have been attacking me and not playing touch football. 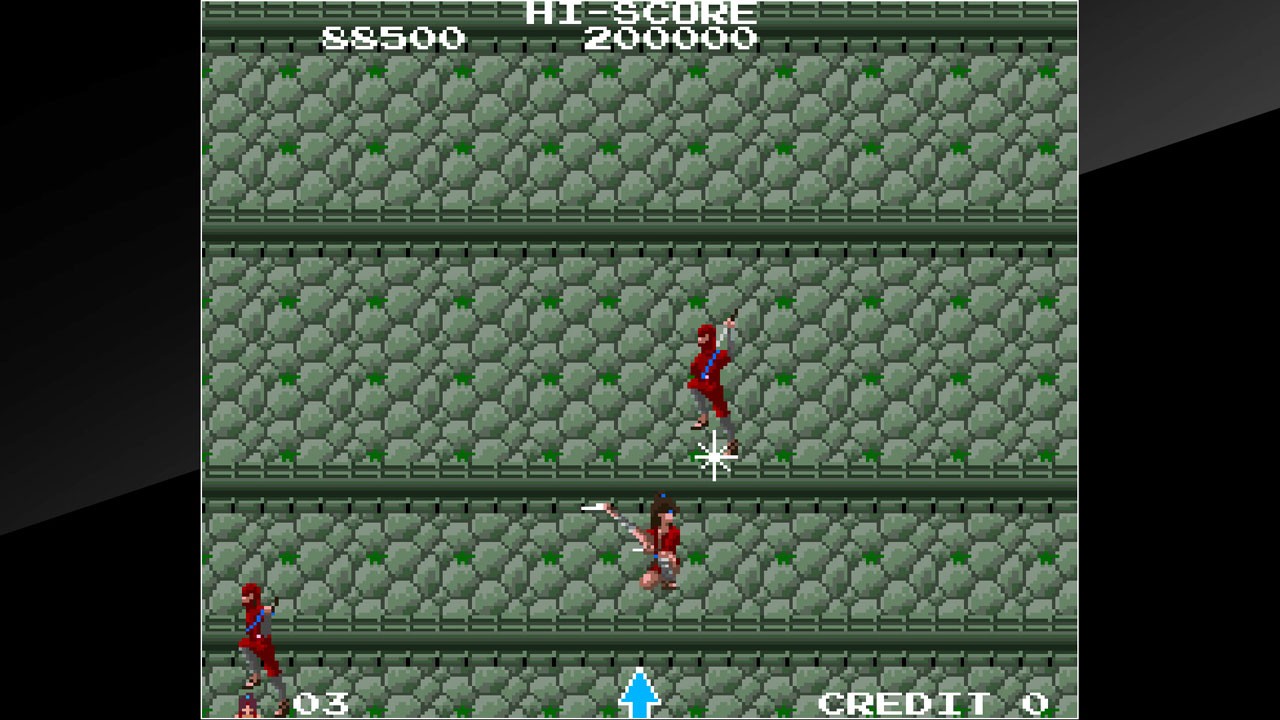 I was able to beat the first two levels of Legend of Kage by just flinging shuriken wildly into different directions until I was told to move to the next stage. The third one was significantly harder, because Kage can’t control his jumps and the enemy finally starts to throw shuriken back at me from all angles. Nonetheless, I was still able to finish jumping to the top of the wall, enter the castle, and then just do nothing as Kiri gets taken. Again. Like all Hamster ports, you have the option to add lives or “tweak” the difficulty, but it just made enemies move faster or spawn differently, and it didn’t make the game more interesting. As cool as the aesthetic was, this game never registered to me as something I would have been dishing out quarters for in the olden times. Like, I probably would have played it once, gotten to the other side, watched the leaves change and not had the patience to beat the game two more times just to see the official ending. Also, by the time I was old enough, the Nintendo port had already been released, which, while less pretty, had the powerup ability to give you bigger shuriken and better jumps. And I’m all about the powerups.

This is going to be another one of the Arcade Archives that really needs to pull at its audience based on nostalgia and name dropping, and I don’t think that’s going to be a lot for many people nowadays. Most only know Legend of Kage because the sequel came out on the DS over a decade ago, meaning a lot of young Switch players have no idea what I’m talking about. It’s a one-and-done arcade run that might kill time between waiting for your dinner to get delivered, but, sadly, I just wasn’t personally invested enough to want to keep rescuing the princess. Buyer beware.

This is going to be another one of the Arcade Archives that really needs to pull at its audience based on nostalgia and name dropping, and I don’t think that’s going to be a lot for many people nowadays.