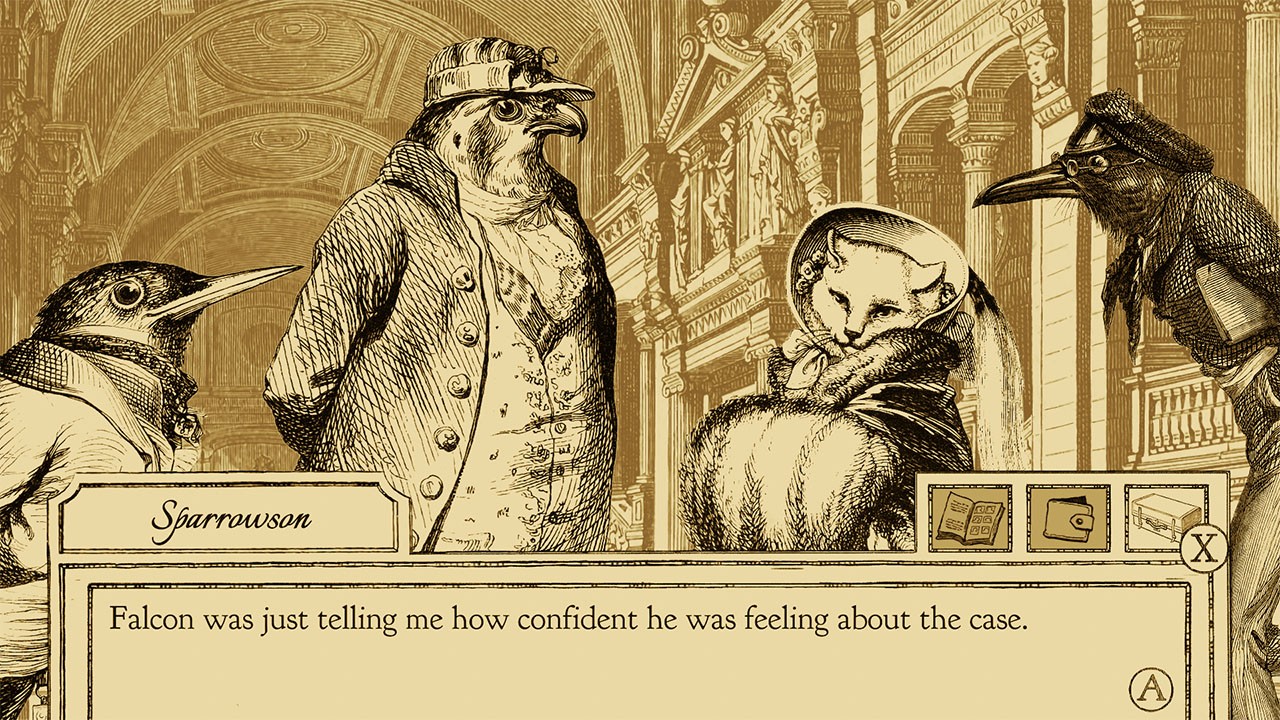 When we are young, we all have dreams and fancies for what the future may hold. Perhaps we will become doctors, or astronauts, or freelance game journalists who squeeze in games between actual work because this somehow became my hobby. But what if you were unlucky enough to be born a bird? Sure, you can fly, and are free to poop wherever you’d like, but one of those is something I can do already AND I have the added benefit of deciding my career. No, the life of a bird is something unfortunate and limited for the industrious, yet it doesn’t have to be this way. Inside the hearts and minds of our feathered friends are ambitions as long and wide as our own. After all, if a bird can look for love (as we saw with Hatoful Boyfriend), why shouldn’t they also look for more? Truth, honor…and justice?

Aviary Attorney: Definitive Edition is a wildly imaginative and robustly funny tale about an anthropomorphic, 19th century world full of inventive characters, bizarre situations and strangely recognizable landmarks. Our hero and lead character is Monsieur Jayjay Falcon, a lawyer who hasn’t been too flush with cases recently and, as such, needs to get back into the game immediately. His sidekick, Sparrowson, is the Holmes to his Sherlock, and the two work together to make the world a better place. As we know, the courtroom is a dire and stressful battlefield, so you must do your best to defend your (theoretically) innocent client to the bitter end, proving locations, creating doubt, and insisting that there is more than meets the eye to what could otherwise be open and shut cases. From ghastly murders to unspeakable conspiracies, you must watch and guide the rise, fall, and rise again of JayJay Falcon and the never ending quest for order in a chaotic world. 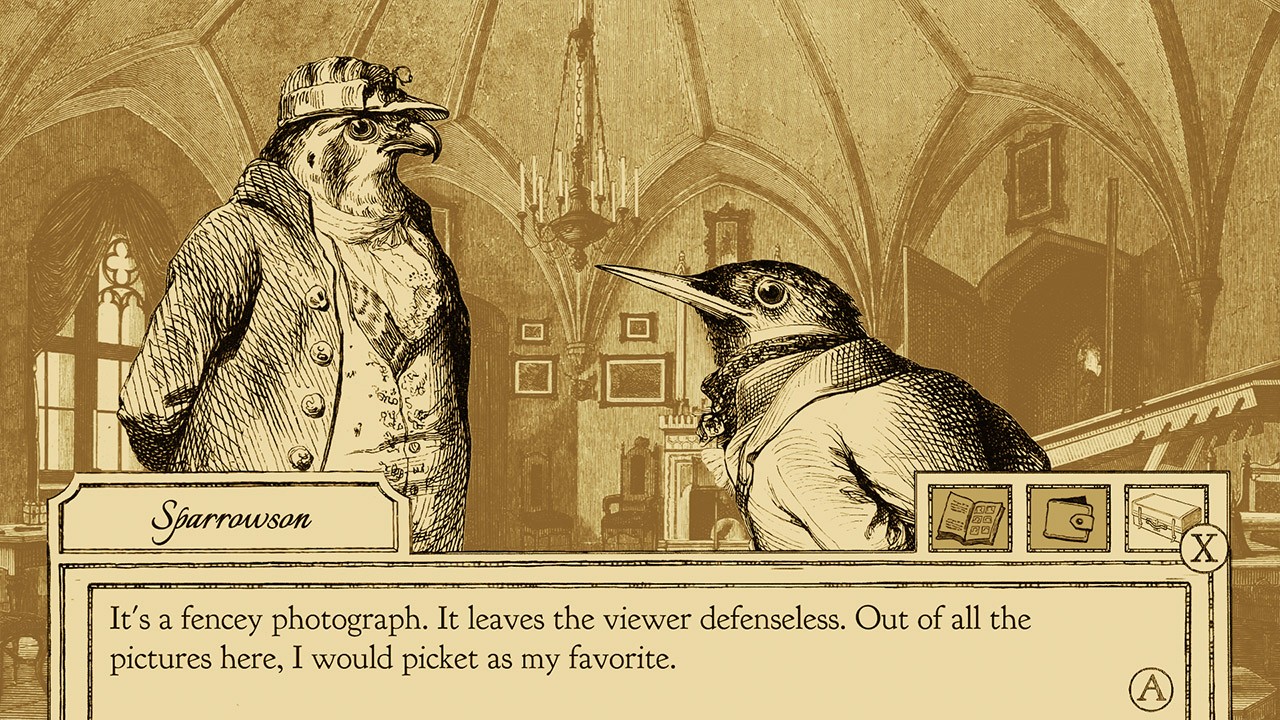 People may immediately become attracted to the idea of this game if you’ve played things like Phoenix Wright in the past (and, indeed, Sketchy Logic may have been inspired based on a pun from that very game franchise). The ideology, at first, is very similar, and one would do well to have those sort of expectations before coming in. While Aviary Attorney is far from a straight and linear path, the ideas are as follows: you end up getting a case that comes across your path, one way or another. You then need to do your own footwork, because God knows the police certainly don’t want to help you defend someone who seems categorically guilty. You search and find clues and evidence, interview witnesses and potential culprits who would seek to frame your client, and then keep everything organized as best you can in that course of time. Additionally, you end up spending money here or there, which is an interesting twist: the coin that you get from things might be necessary to persuade information to come forward, or it might even suit you to change the course of the game dramatically in an altruistic way. In any case, just be aware of what you spend and what you have later, because money does make the world go around.

Aviary Attorney is fantastically written in the development of storylines, as well as the character dialogue. While people may be delighted by the art styling that is directly lifted from a 19th century caricature artist, it’s the way that those drawings are framed that really push things into the next level. As you move between gorgeous buildings and landscapes, the interactions between Monsieur Falcon, Sparrowson and the rogue’s gallery of friends and foes are memorable, interesting and, above all else, enjoyable to read. The game does an excellent job of dividing what is important from what is not important by making the inconsequential humorous. Time after time, Sparrowson is overflowing with puns and quips about the items you see around you, with Falcon and the rest pick their battles for when to acknowledge the terrible jokes or to simply let them lie. The whole thing plays out with the sort of British-style of humour you might expect from a game about a bird fighting for justice in an aristocratic world. There’s also plenty of underhanded barbs being thrown about, questionable lines about the different crimes our lawyers commit in the name of the law, and several running gags, including a feud between Sparrowson and Rabbington about being equally bad at practice law. These lighthearted notes and repetitive puns, especially in the first two acts, are the perfect bait to draw you in under false pretences.

You see, you must conclude the first act by working through a case that seems open and shut, and, indeed, you can get through it without much struggle or difficulty. The clues that you dig up along the way seem pretty obvious, and you need to remember that the courtroom, while sometimes a bit of a kangaroo situation, must be treated with respect and dignity, so leave your jokes and dry wit at the door. That’s probably the most important part to remember with Aviary Attorney: focus on how you would win a case if you WEREN’T a bird in a distinctly hilarious situation. Cross examine witnesses by bringing up physical evidence you found and select how it counters their own statements and words. Once you win this first case (which should be zero problems), the game takes a DRAMATIC right hand turn, and you begin going down a path that I was honestly unprepared to go down. There is a lot of darkness ahead, and you need to constantly struggle with the way that the world affects JayJay and the cost of defending those who may be innocent, but may also be guilty. Believe it or not, there are multiple endings with some of them being positively morose…if you’re not able to help JayJay battle his demons. 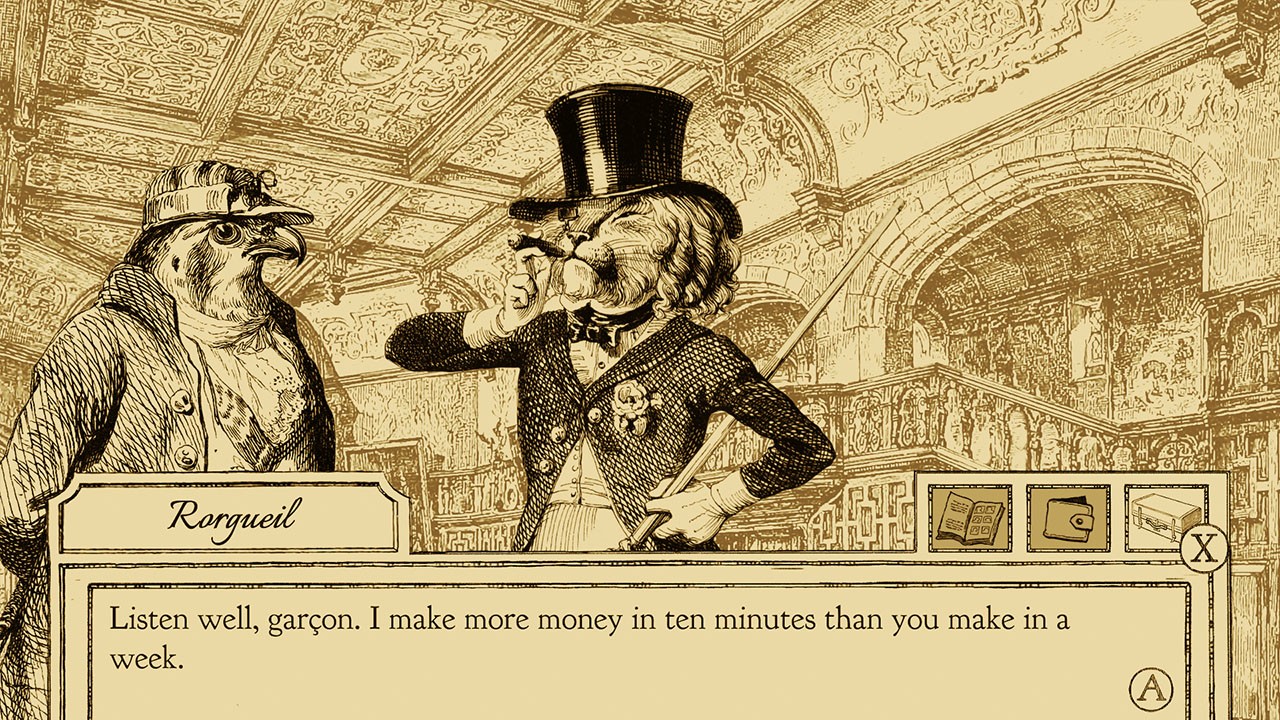 The aesthetic of Aviary Attorney is brought into sharp focus on the Nintendo Switch (hence the Definitive Edition) with the graphics being touched up a tad and the beautiful romance-era soundtrack piping through and accentuating the proper mood of either a posh estate, a very famous cathedral or some creepy catacombs. With each Act of the game taking place across multiple days (it usually takes a full in-game “day” to explore one area), you are often at the mercy of game’s pacing to see how and where the story will take you next, which can sometimes be a tad annoying. You watch these giant, almost comical doors open and shut between scenes, and there’s a deliberate pause between characters talking that comes across like stalling, but it’s just the game loading and a choice to put some breathing between lines. Choosing the different dialogue branches either in court or out can also take a moment, so it’s important to note that Aviary Attorney, while it can be completed in a day easily, will still demand that you drink in the game at a modest pace. Also, there are several times where you cannot decide against the game’s direction. At the beginning of Act II, Sparrowson has to decide whether to wait for JayJay to arrive in the office or go looking for him. You can stall until the cows come home, but, eventually, you need to decide to go out looking for him or just give up on playing the game entirely. False freedom is necessary to keep the game moving, but it could rub some players the wrong way.

I love good misdirection in a game. Being led down one path and then turning onto another is what makes certain artistic games incredibly exciting. I feel like Aviary Attorney did a fantastic job of keeping their core absurd style at the forefront and peppering in plenty of comedy throughout, but also developing a plot and a subset of ideas that was totally unexpected. If you’ve been looking for something that’s in the vein of Ace Attorney, but want to see what happens when the wheels really come off the wagon, then Aviary Attorney could be the best place to nest for these next few cold months.

Never before has a game so fowl been so incredibly exciting.