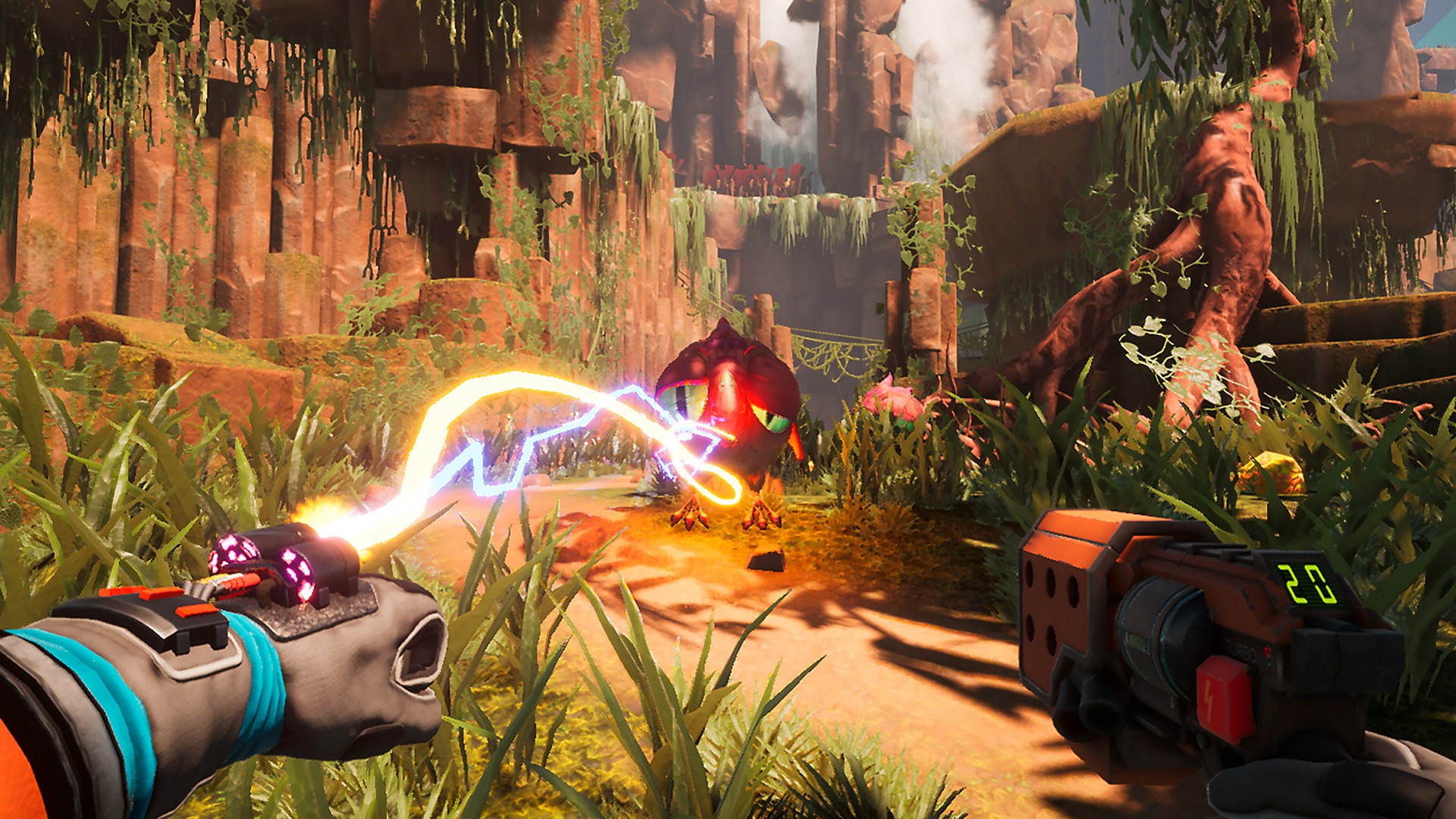 The real beauty of Journey to the Savage Planet is its ability to not take itself seriously. I’d just recovered from a tense battle with what seemed like an endless wave of Jellywaft (airborne, acid spewing jellyfish to you and me), and headed back to my ship to deposit the Alien Alloy I’d earned from the fight. Once back, I noticed I’d received a new video message in my inbox. Never one to turn down a request from upper management, I checked, just in case my bosses at Kindred had sent me a new mission to complete while stranded on AR-Y 26. Alas though, it was just another advertisement, this time for Wedgie Burgers, the five-patty vegan burger made from real, 100% vegans. Obviously.

Beneath the satire and silliness, Journey to the Savage Planet could have quite easily rinsed and repeated the same space exploration traits as a million other games and probably gotten away with it, but it feels entirely unique. Taking the role of one of Kindred’s (Earth’s fourth best interstellar exploration company) brave explorers, your task is to find out if the planet is fit for human habitation. Unfortunately, you’re grossly under equipped and most of the planet wants to kill you. To further complicate things, a giant tower in the middle of the planet seems to indicate sentient life. Despite these shortcomings, Kindred CEO Martin Tweed wants to find out what’s in that tower and, seeing as you’re there, who better to find out?

While combining aspects of both, Journey to the Savage Planet feels like an adventure game with aspects of an FPS rather than the other way around. Climbing the tower and discovering the truth about AR-Y 26 feels far more important than getting locked into endless battles with deadly predators, and that’s absolutely okay. Almost everything you come across, from plants and creatures, to ancient artefacts and alien doorways can be scanned and archived. Completing your research is not only hugely satisfying but vital to your mission, but Typhoon Studios has managed to make a game so endearing that I want to explore every crevice and find all the secrets that this bizarre, beautiful world has to offer. 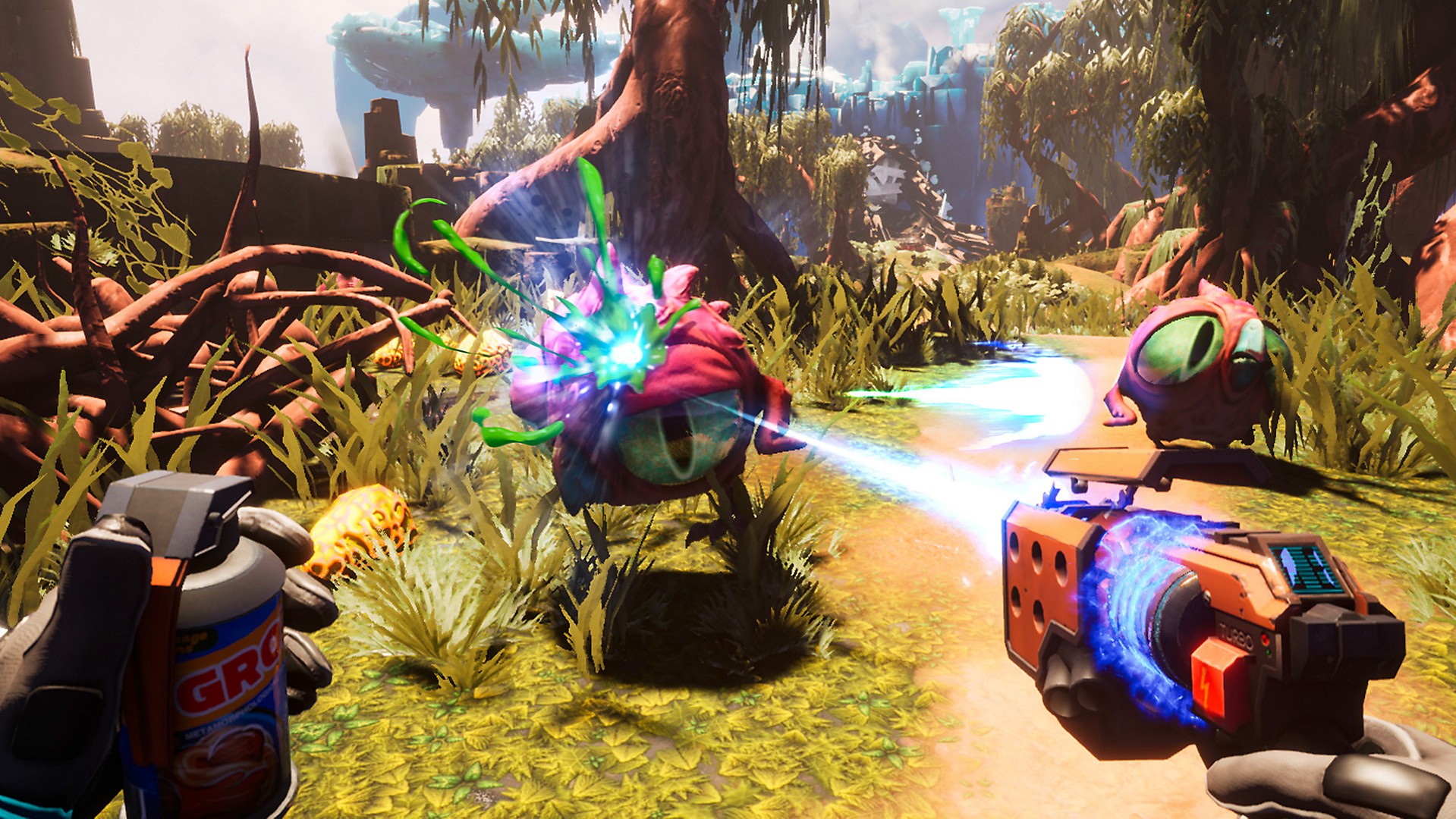 Despite not being forefront, combat is far from lacklustre. Fighting aggressive fauna is loads of fun, especially once you start upgrading your gun, but the real entertainment comes when you play around with the local plant life. Whilst you hold your gun in one hand, the other is used for holding useful items that you can use to manipulate your environment and enemies. Early game plants like explosive Bombegrante’s can take out cracked walls and expose new areas, and sticky purple Binding Bile can glue enemies to the ground. The further you explore, the more flora you can play around with, some of which you need upgrades to be able to carry, often meaning you need to do some Metroidvania style backtracking to expose new areas and secrets.

It’s through the planets four distinct biomes that you discover these new flora, from the early Landing Site to the late-game Elevated Realm. Each one comes with different challenges and oddities to discover, new creatures to fight or bully, and puzzles to overcome. The Elevated Realms for example is impossible to explore without the Proton Tether, a grappling hook-like ability, turning the area into a chaotic swinging jungle gym, requiring you to nail the landings as you swing from pillar to pillar. The Landing Site however, the first Biome, is a mixture of jungles, icy caverns and furnace-like lava fields which in itself comes with its own set of challenges, especially early on when you’re essentially without any equipment to aide you.

You can build your arsenal back at your base via a 3D printer on the Javelin. Upgrades require crafting materials gathered by local sources, such as alien alloys, killing local fauna or finding rock veins full of bounty. Fully upgrading your things however requires you to complete scientific experiments to level up before you can gain access to useful quirks. While early tasks are easy, taking a sample from a common, none-aggressive creature for example, later tasks are quite tricky and take some time to fully master, especially if you want to become the best space explorer Kindred has to offer.

Taking on predatory species that you come across is usually obvious, and while some have quirks, most just require a few quick blasts with your trusty gun to take down. There’s a handful of great boss battles that feel very traditional, for example the Craglaw early on has a very obvious pattern to follow. Keep at it and he’s a breeze to defeat, and this is pretty much the same for all the bosses. Some of the standard enemies can be much harder, fighting a group of Pikemander’s for example can cause even the most seasoned explorers a work up a bit of a sweat, but it’s never too difficult that you feel like you’re being punished, and a majority of these fights are optional. It keeps your time on AR-Y 26 oddly, relaxing. 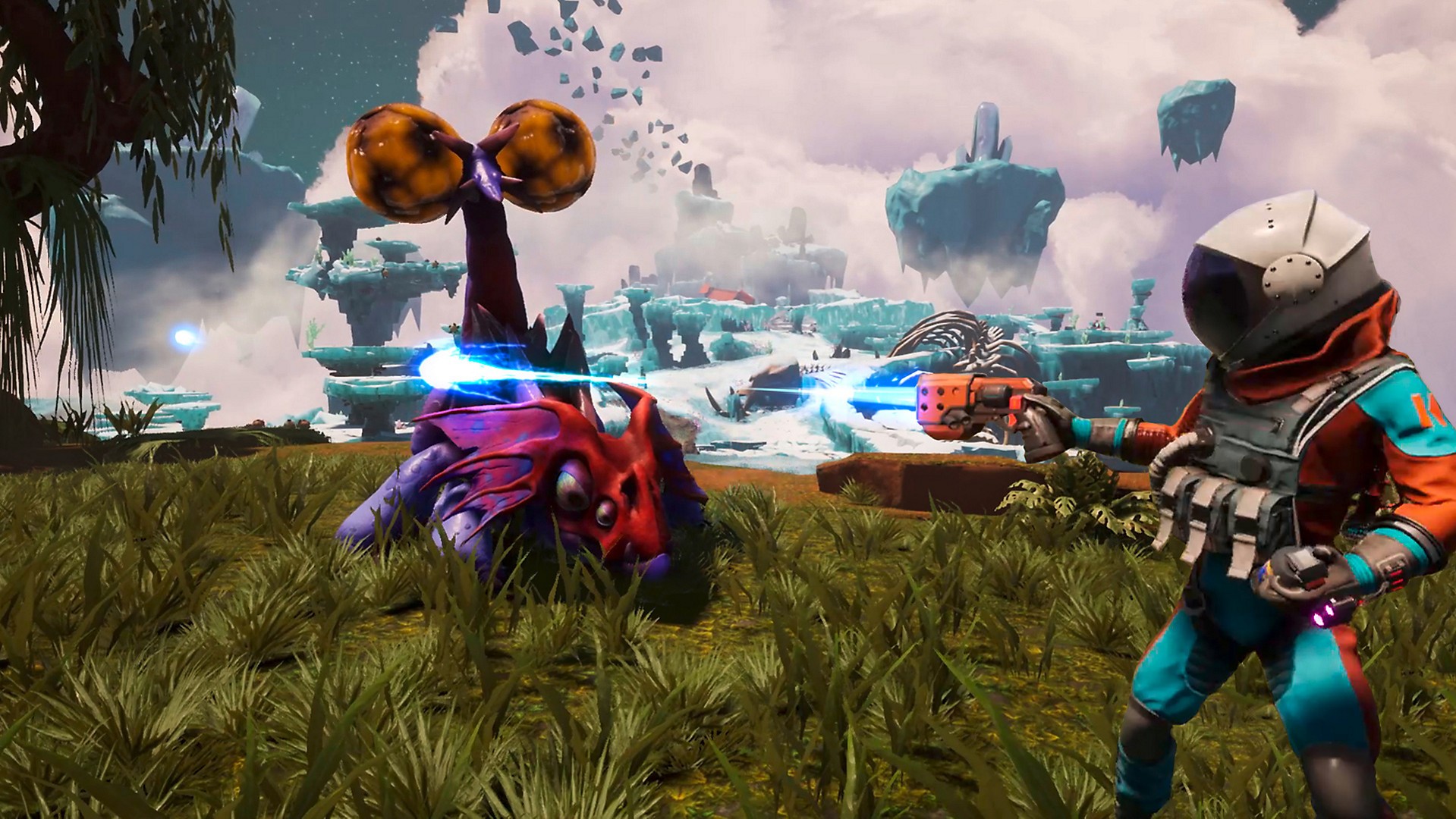 Death in Journey to the Savage Planet isn’t permanent, but you do have to go back and recover any loot you’ve dropped. It’s a system we see a lot these days, but the game makes it easier if you drop your stuff in an awkward place by beaming it to the nearest flat surface. It sometimes feels tedious to have to backtrack if you drop it in a location that isn’t near a teleporter, and travelling back can be frustrating at times. While you can scan to see your objectives and pin a location, such as where the Javelin is, if you’re miles away from home then it can be pretty daunting to have to make your way back without knowing the location of the nearest teleporter. The game is completely without a map to show you where the nearest one is, which can be frustrating and at times can leave you feeling lost. It’s a simple thing, but, as essentially a cartographer, it seems weird to omit such a basic and useful tool that would make exploring much easier.

The twelve or so hours it took me to finish the main mission felt just right for the price tag that Typhoon Studios are asking for Journey to the Savage Planet. There’s still loads for me to do though – I still need to find enough fuel to leave the planet, I still need to complete all my science experiments and I still have three side missions to complete. Oh, and that’s not even including all the collectables and hidden secrets to find. For the most part though I spend my time just aimlessly wondering about, taking in the weirdness of the world, listening to the mindless drivel that EKO spouts at me or laughing at the stupid adverts that pop up occasionally in the Javelin. I don’t think I’ll ever get bored of swinging into an open field of Pufferbird’s, their giant eyes gawking at me as I kick them into oblivion, or watching the Royal Skipper swim through the air over the giant mushroom trees as I bully a group of Baboushka. It’s simply divine world building, akin to Oddworld – a game Lorne Lanning would be proud to call his own.

While EKO, your companion AI is ample company during your adventure, you can play online with another player too. It doesn’t massively change the game, but it’s a simple, solid tool that allows you to bring a friend into the game to explore the universe together. It’s stable enough, and if you don’t like who you’re playing with you can boot them with a click of the button which is always handy. There’s no coach co-op though, but you aren’t restricted online, so you can explore together or so split up, so feel free to torture local inhabitants solo or as a pair.

I don’t think I could ever get bored of Journey to the Savage Planet. The rich environments, absurd satire and great game play keep me coming back for more. It’s a fantastic, rich adventure that’s both relaxing and exciting in equal measure, with tonnes of content for a great price. Come to think of it, I don’t really mind if Kindred leave me stranded on ARY-26 after all.

I don’t think I could ever get bored of Journey to the Savage Planet.