Hovership Havoc developed and also published by Snow Day Software is a twin stick shooter located in science fiction style maps. This title intrigued me as I love anything with twin stick mechanics such as the Geometry Wars titles. When you start up the game its pretty generic in the fact that you will choose a ship and start shooting everything in sight. The objective is fairly simplistic, survive the waves of enemies and smash anything else in sight. You’ll also be looking to reach the end of these small action packed arenas where you’ll also be looking at facing a boss at the end of the chapter.

What you have to bear in mind here is that the game was created and developed by a single person so approach this with an open mind and don’t expect anything mind blowing. Once you select your craft and spawn into the arena you’ll have a primary weapon which can be topped off with a secondary which you can pick up during your time battling enemies. Alongside this there are also boosts you can collect to assist you in the waves of bad coming towards you. You will find out pretty quickly that you will need to utilise your space and negotiate enemies being mindful that not thinking ahead can cost you dearly. 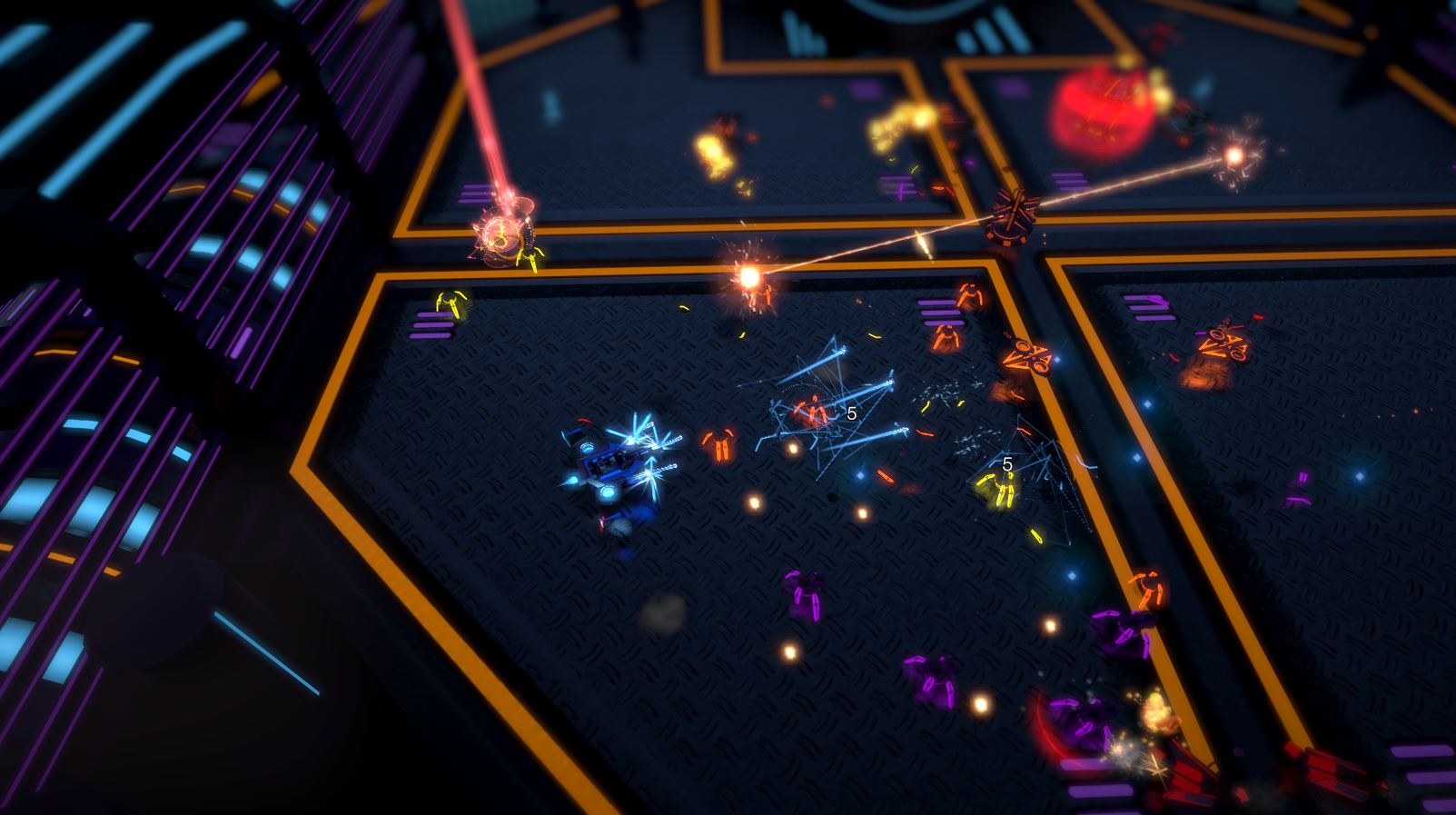 As you progress through the game you will be able to upgrade your craft through the experience points that you have obtained throughout your attempts. You’ll be able to improve your speed, health, shot speed, cooling system, you get the gist. It is hard to criticise the efforts of someone who created this game all by themselves but the game can get extremely repetitive quickly. Graphically though, the game is well designed and its use of colours blends and ties in nicely with the surrounding areas of the arenas. As you’d expect with a game of this calibre the music has some high tempo techno music which adds to the experience. What I did notice though that the other sound effects outside of the music is sometimes louder than the soundtrack although I am sure this could be edited in the options.

The control system is simple and straightforward, left stick to move, aim with the right, right trigger to fire and A button to dodge enemies. It doesn’t take a genius to figure these out and this will appeal to real casual gamers. The entire majority of the game is played with a top down view however you are free to battle against bosses in a third person perspective. This is where I gained my most enjoyment from the experience when fighting the bosses as they were all different with variants of weapons. It always feels exciting in games when you see a boss for the first time but you are required to learn the logistics of how they operate and how to counter them. 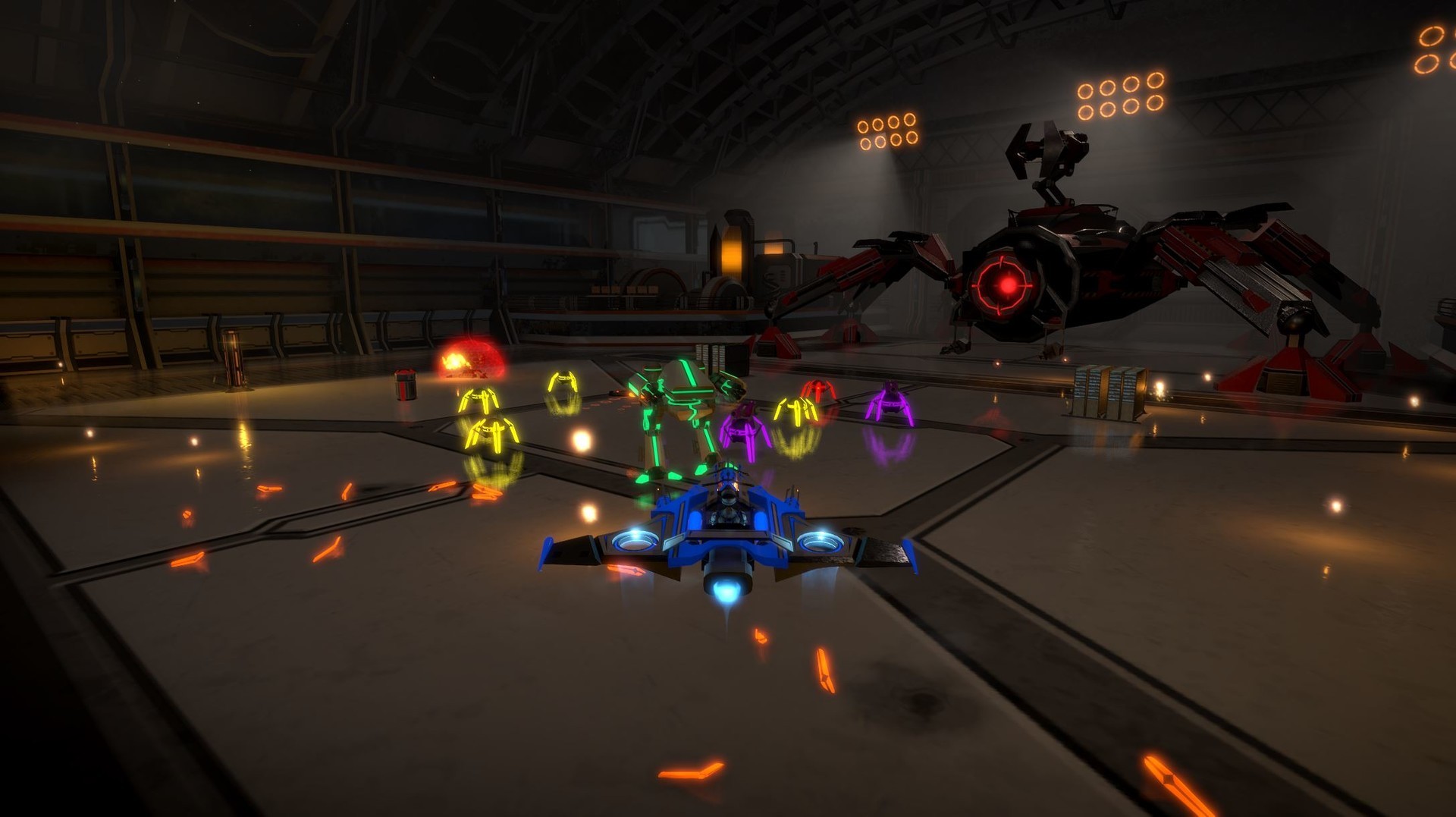 The great thing about Hovership Havoc is that even though its a basic simple experience there is some replay value here. You will find that once you upgrade your ships, that when you tackle levels you have played before they will appear much easier. I do feel that the craft could feel a bit more weighty when flying around the arena as they felt somewhat flimsy. Sadly there is no multiplayer modes or co-operative gameplay here, something which could have improved the longevity of the game. The achievements are obtainable and fun to unlock although, but it may not be entertaining enough to some hoping to try their hand at unlocking them all. If you’re a fan of twin stick shooters and want something not too serious with a great few hours of fun at a cracking price point, then why not give Hovership Havoc a bash?

Hovership Havoc is another addition to the twin stick shooter genre. Whilst it is great fun for a limited period of time, it does fall slightly short of the mark with lack of multiplayer and co-op modes.