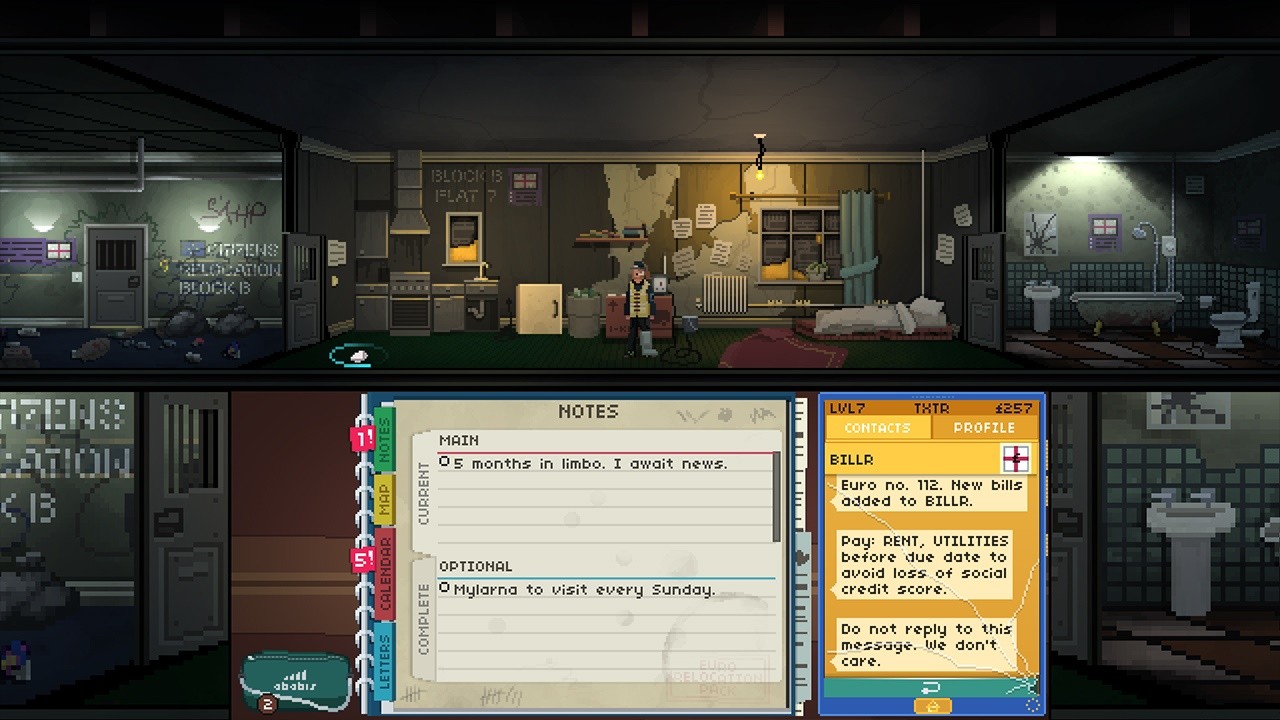 If, like me, you live in the UK, then you’ve probably had enough by now of hearing about Brexit. It might be the same in other countries too, but here in the United Kingdom, we’ve had three and a half years of political turmoil and divisions between remainers and brexiteers and now that the event is actually upon us, an unknowing in what happens next. Well, if you’re one of the minority who hasn’t had enough of hearing about Brexit or are looking for an insight into what the future may hold, albeit in a rather extreme alternate reality, then you can always play a game that deals with the subject, as Panic Barn and No More Robots’ Not Tonight: Take Back Control Edition calls for a referendum upon the Nintendo Switch.

Set amongst the backdrops of a Post-Britain Brexit, although in an alternative setting where the UK is now known as Albion, the complete control of a political right-wing party known as Albion First and a complete distrust of anyone with the slightest hint of European ethnicity. You begin the game by selecting from three scenarios of ethnicity and creating a look for your character; affectionately known as Euro. Although British by birth and nationality, you’re monitored by the Albion authorities due to your family bloodline attaining to European connections. You spend your life housed within a detainment facility and in order to retain residency within Albion, you have to abide by the laws presented to you, make a contribution to society through working and prove yourself to be invaluable to the country as a whole.

Primarily a survival/RPG game, you work as a bouncer in order to keep the authorities happy under the scrutiny of PC Jupp; an Albion policeman who determines your status as a bonafide resident of the country. Using your phone, you pick up a number of jobs through the BouncR app in order to keep Jupp happy and provide a means to bring in a steady wage in order to pay off a number of outgoings from rent charges, medical fees, clothing and decorating items, as well as pay off the demands of the ever watchful Jupp. The more jobs you do successfully, the higher your stature and rating; leading to roles such as head bouncer and opportunities to watch the doors at a number of establishments, even leading to the Albion border itself. 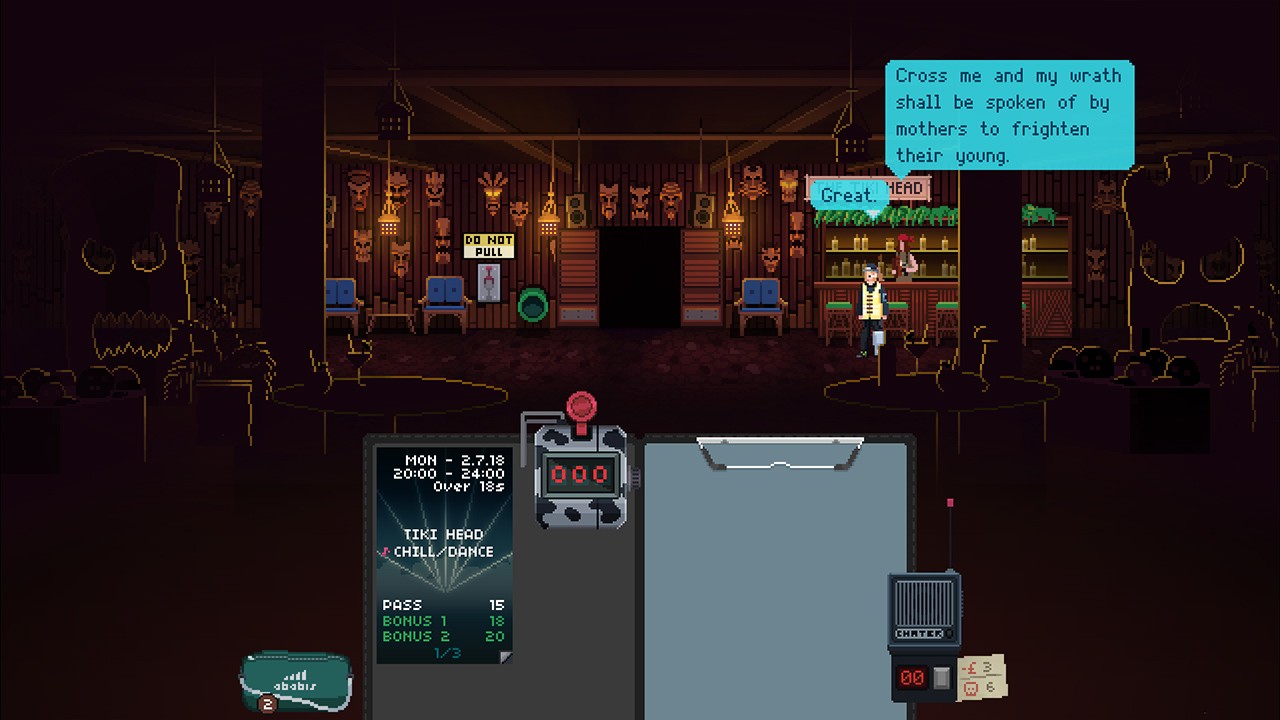 The higher your status, the bigger your earnings. This becomes an important element of the gameplay, as you soon find that the bills come rolling in thick and fast, as well as the requirements to dressing appropriately for certain establishments and the purchase of clothing through the ShoppR app. Although you play the game as a micro-management style of maintaining Euro’s life within Albion, the main core of the game revolves around doing your job as a doorman. This involves checking the ID’s of the public who patiently queue to enjoy the fruits of a night, or day, out. Different establishments have different criteria when it comes to the rules of who may enter or not. Your career starts off with checking dates of birth to ensure each patron if old enough to enter, to checking for valid stamps, country of origin and photographic identification.

As you progress through the game, the requirements become more and more demanding. From guest list checking to passwords, ticket dates and forgeries. This is all further hampered by a time constraint and a requirement to fill each establishment with a set amount of guests. Between the opening and closing times, you need to reach a specified number of people to enter in order to start earning. However, make too many mistakes, such as letting in underage people, forged ID’s or invalid ticket holders and you’ll be issued formal warnings, docked wages or force an early closure with no wages. Failure also has an effect on your social status and the possibility of PC Jupp issuing you with your deportation papers.

There are a huge number of elements which need to be managed within the game in order to make your life a success and attain a status that allows you stay in the country. From keeping up a good rapport with the authorial figures Jupp and your various bosses to earning money and gaining reputation. Work your way up to head bouncer and your wages can double or triple, meet all of the requirements of the night and you earn a bonus. You can even take backhanders at your own risk and make a side-living through selling a series of a narcotic substances for large monetary gains. It all adds to create an urgency when it comes to your role as a bouncer, producing an element of fun as you check IDs, kick yourself at making a mistake and deciding on whether to be honest guv’nor or a bent doorman. 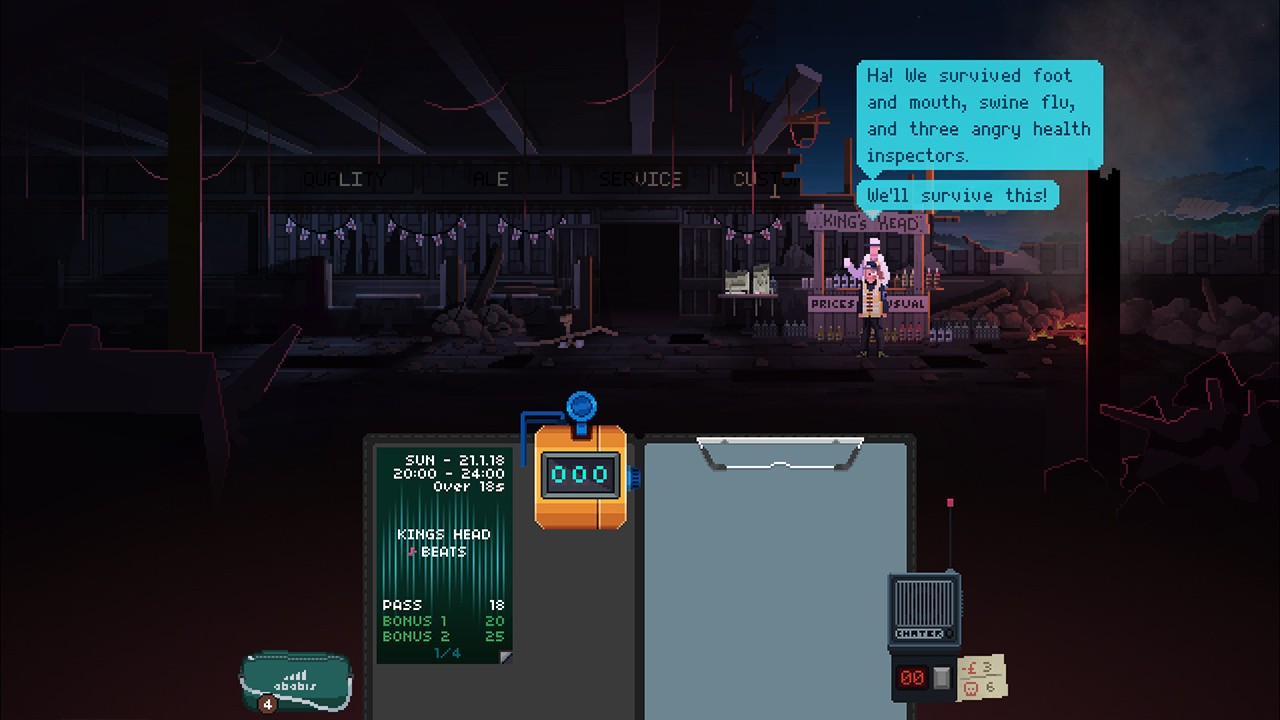 However, there’s also a story element that runs through the game with the political upheaval and life in Albion after Brexit. As you progress through the daily routines of your calendar, a number of characters knock your door or visit to provide a series of tasks, narratives and decisions. The postman delivers mail, your neighbours converse, Jupp watches over you and the resistance comes through your toilet to provide information. The narrative that pushes the game along constantly makes a mockery of the whole Brexit situation and contains some hilarious interactions that stays firmly tongue-in-cheek and holds a variety of adult-only content. This is by no-means a game for kids. This interaction leads onto a series of choices and decisions on whether to stay on the right side of law and PC Jupp, or work for the resistance at bringing down the right-wing rule of non-Albion residents.

The whole presentation of the game produces a very playable and fun title. It’s pixel style is superbly detailed, with some impressive backdrops and hilarious locations and the day-to-life monotony of living Euro’s life and performing his job is actually good fun. Despite its repetitive nature, this was still a game that I was able to lose hours at a time with, as well as be a game that I could drop into at various times for a quick burst. Despite its playability, the game does hold one or two annoying factors though, such as cross-checking photo IDs or dress regulations can be difficult to make out, menu selections can feel clunky and its repetitive nature can grind at times. However, it still holds a certain something that forces you in time and time again.

Overall, Not Tonight: Take Back Control Edition creates an entertaining and satirical insight to an alternative Brexit outcome. Its hilarious narrative and characters produce some fun moments and its premise at maintaining your daily life does hold an addictive quality. Your role as a doorman does follow a repetitive pattern, but also holds a good level of fun as you run a smooth night or kick yourself as you allow entry and notice a discrepancy at the last minute. You really need a good eye for detail in order to succeed here. This Take Back Control Edition of the game also comes with the DLC, One Love, where you play the game as one of the main game’s characters who heads off to France to find a new life, love and employment. So, if, like me, you’ve had enough of hearing about Brexit, then why not take a look at this humorous alternative and forget the real-life events; at least until that day when PC Jupp comes knocking at your door.

If your name’s not down, your not coming in with this hilarious look at the life of a doorman after Brexit in Not Tonight: Take Back Control Edition.