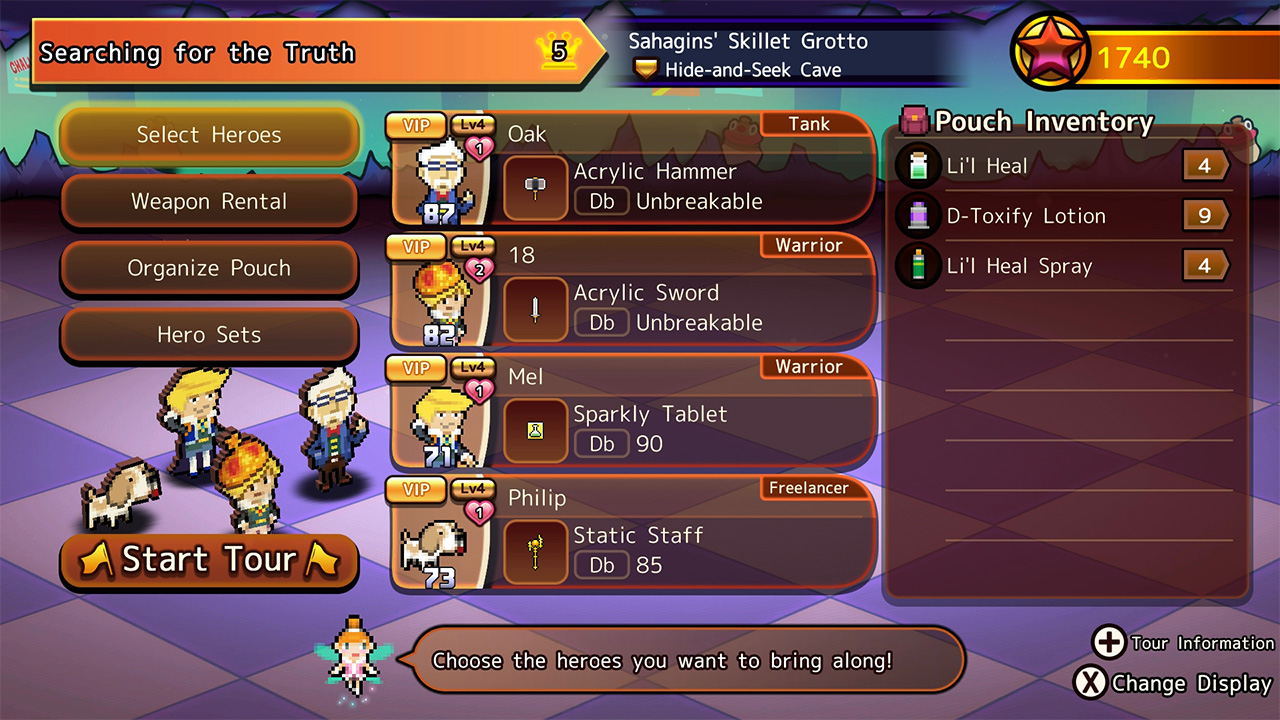 It’s easy to see the allure of role-playing games. Travelling vast distances across distant and spectacular lands, engaging with characters and stories, levelling up heroes and weaponry and an endless queue of monsters all waiting to be slain in combat. Even if you don’t really care for the genre, you have to admit that it’s still one of the oldest types of video gaming still around. However, what if you wanted a break from all your heroic deeds, or imagine if your feet were aching from all of your venturing? You’d want to take a back seat wouldn’t you and let everyone else do the adventuring for a while. Well, now you can, as Marvelous Games, XSEED and FuRyu bring us Heroland as it quests a release onto the Nintendo Switch.

To give us adventuring gamers a break from the norm, Heroland puts us in the shoes of Lucky, who takes on a new job in order to raise enough money to help his struggling family. His new role sees him take up the position of a tour guide within the fantasy theme park, Hero Land; a place where people can experience the thrills and spills of role-playing and dungeon-questing in real-life (although in a virtual sense, if you get my drift). He knows that he can raise the necessary funds within a couple of sessions, but after an unfortunate accident that sees a priceless artefact smash into pieces, he is forced into working for the rest of the season in order to pay back the priceless costs of his misfortune.

It isn’t long before the crowds start piling through the gates and Lucky begins taking his parties through the park’s many quests and dungeons. Being the guide, it is your job to ensure that the paying public are safe and getting the most from their experience. As you take a back seat, you offer guidance and tips to get the upper hand in combat, make sure everyone is equipped with the proper weaponry and armour and give a healing hand should anyone begin to get perilously close to dying. After all, you wouldn’t want a scandal like that on your hands, would you? Not just for you, but also for the theme park that employs you. 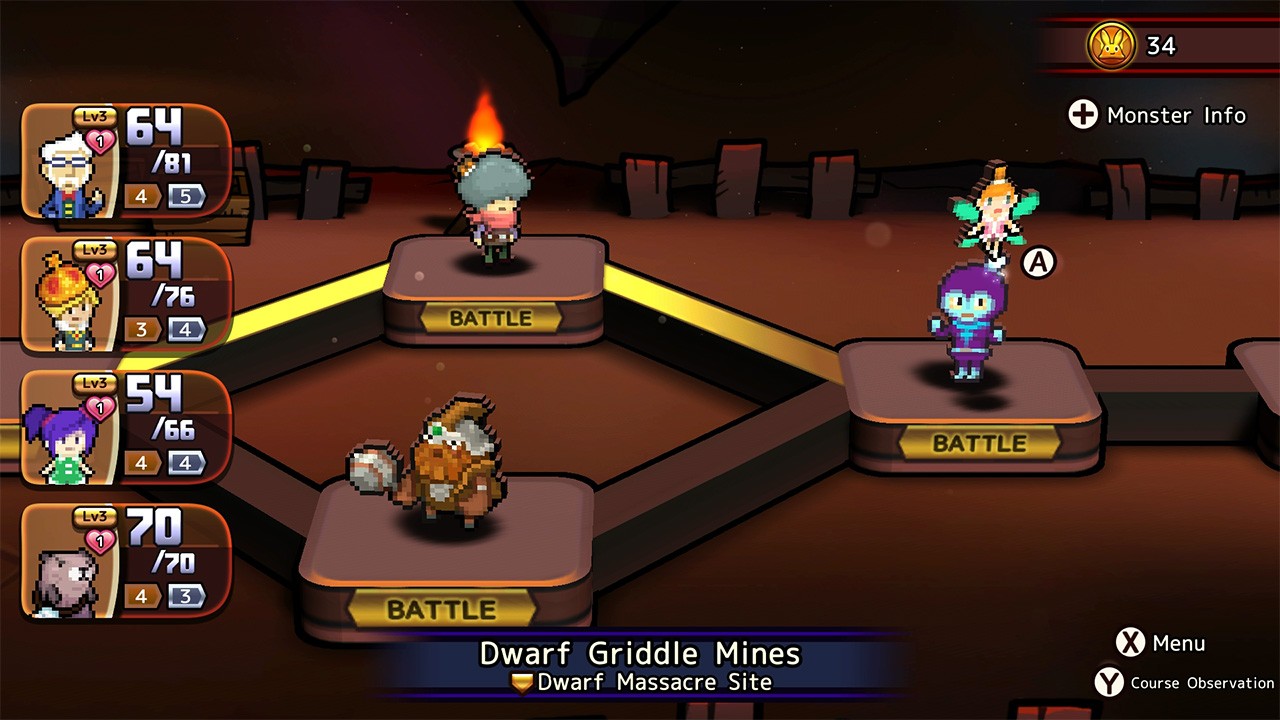 Despite your best efforts to make sure everyone is having fun, including your fellow employees who play the role of monsters, it soon becomes apparent that not all is right at the park and beneath the catacombs and layers of its attractions, an evil lurks; putting the lives of everyone involved, yours included, at great risk. However, in a good-old fashioned role-playing style, you can level up parties, meet new guests to quest with and provide invaluable support with outlining certain tactics or weaknesses to give your guests the upper hand; as well as save the day, your job and your family. Oh and the theme park too. Fail at doing your job effectively and the guests will make their feelings known through a satisfaction meter. Perform admirably though and the guests soon become reliant on you, causing you to level up yourself and grant new abilities and carry more items.

The game plays through a variety of scenarios, with an ongoing narrative that pushes the game forward, brings new characters and shines with its hilarious dialogue. Take Elric for example, who has recently found himself demoted from second in line to the throne, to eighteenth. In order to seek redemption and prove his worth, he has come to the theme park setting of Hero Land to follow in the footsteps of his father and take down the dark lord; only this time it isn’t an employee dressed up, but the real thing. Each of the twenty-plus cast of characters that you come across, all have their own quirky and hilarious backstory; making the progression of its story an enjoyable romp.

The second element of its gameplay lies in the dungeon-questing and role of performing your job. From the selection of theme park guests, you make up a party of four to venture into the many attractions that await. It’s your job to make sure each party member is equipped effectively and that you have a full stock of items needed to perform your job effectively. In a turn-based mechanic, you guide your party through the attractions; one tile at a time. Each tile can host a number of events, from treasure boxes, narrative progressions and monster encounters. Whatever event you land on, the action plays out automatically and you simply take a back seat and watch the action unfold. However, you need to step in at times to offer guidance to your guests by proposing a certain attack or monster to target, as well as provide health regenerations should a party member’s health fall critically low. As each quest ends, the guests rate you on the satisfaction and fun factor of each attraction; thus rewarding you with XP levels and the much-needed funds that you work for. 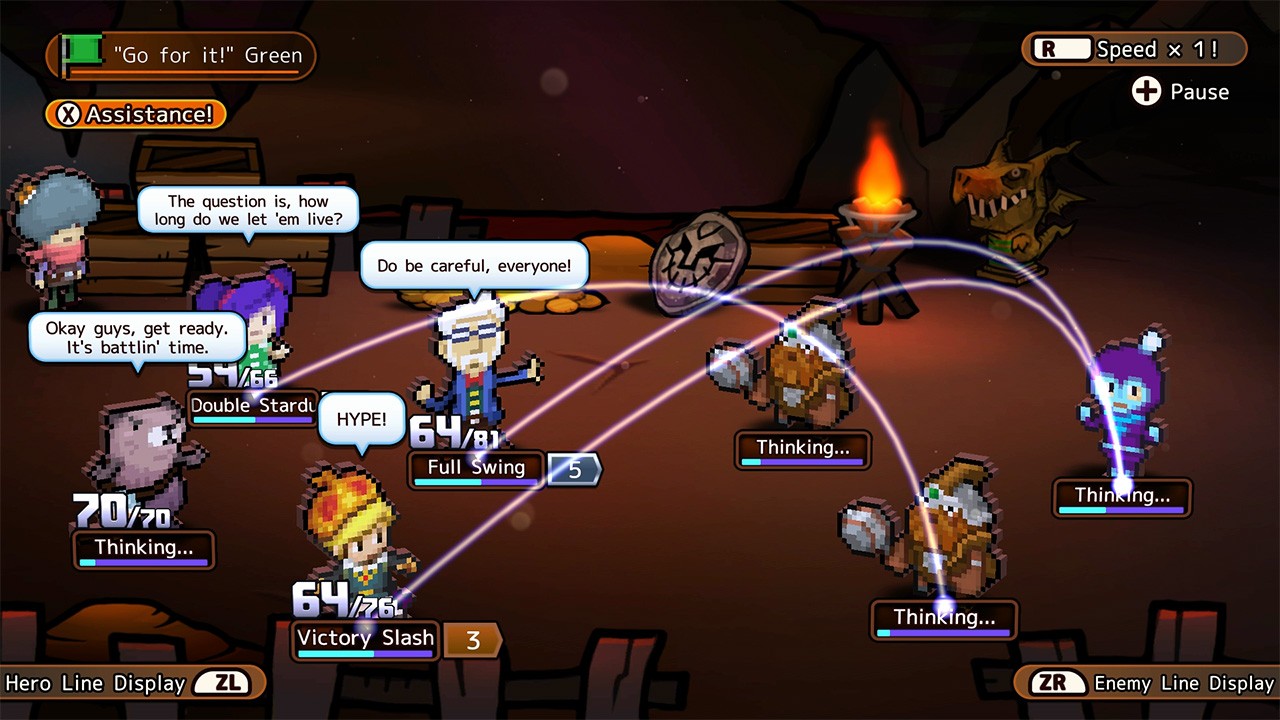 The play style of Heroland offers a new take on the role-playing genre, as you simply don’t get involved with the meat of its adventuring. You simply stay by the sidelines and monitor the progress of your guests and step in when needed. You don’t take part in any of the combat or embark on a massive quest like other role-players; although in terms of length, there’s fifty-plus hours worth of game time here. With its back-seat style, this is more of a pleasant jaunt, rather than a full on adventuring journey and in that respect, gives a more relaxed feel to its gameplay. Although it sounds like your actual input is limited, later levels do offer a tactical urgency that requires an eye for detail and good sense of recognising important events. In easy terms, this is a game that is more style than substance.

This is largely due to a narrative that is cleverly written and very comedic; often paroding the role of role-players and workers rights within the park, as well as the individual lives of the park’s guests. Its graphical presentations also contain a great deal of charm, with a pixel-art form that twists and bends with the dexterity of a third-dimensional model. Despite its limitations of first-hand engagement, there is a lot of fun and plenty to do within the attractions of the Heroland; although admittedly, its repetitive and grindy nature does outstay its initial welcoming into the park. Oh, and then there’s the sound effects. Well, the less said about the grating sound, the better. Let’s just say that the majority of my time with the game was spent with the volume firmly on zero, as the beeping chatter of characters and repetitive tunes made my ears bleed.

Overall, Heroland certainly offers something different for the average role-player. Playing the part of a tour guide and not necessarily getting involved in the nitty-gritty of role-playing quests can feel a bit limited, but its general task-handling, quirky narrative and charming presentation, more than make up for it. However, its initial charms do wear thin pretty quickly; especially with its repetition and necessary grind to advance, as well as its tendency to be more of a watchable game than an engaging one. Taking a back seat may not be to everyone’s liking, but if you’re looking for a more relaxing adventure that doesn’t ask everything from you, then you might find this title a refreshing break. It’s fun and it’s unique, but ultimately, I couldn’t help but feel that I wanted to take the reigns every now and again and become that hero that I’m so familiar with.

Heroland certainly offers something different for the average role-player.