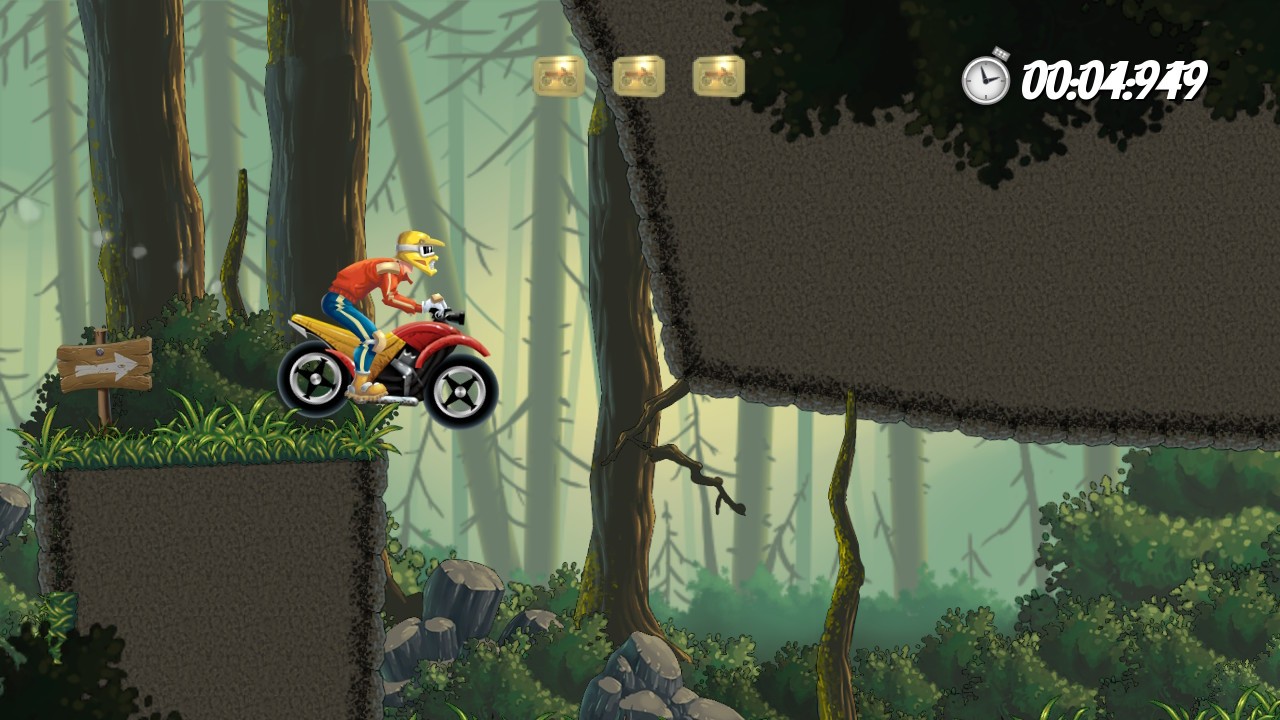 A handful of mobile titles escape me right now, but there have been more than enough of these stunt type games that often have a paywall of paying a few more quid unlocks a new vehicle and so forth. Actually, the game that comes to mind in Hill Climb Racing, that was on iOS and I played it solidly for a couple of months. The premise was simple: guide your vehicle across varying terrains without flipping it or ending up in ditch, all to the tune of a depleting fuel tank. Old School Racer 2 is like that, only without the fuel meter and no paywall.

Old School Racer 2 has the same plot – to get from one checkpoint to the other, only this game has tournament options (to some degree), and it’s a cost-effective option as once you buy the game, you unlock the extras through your skill and not your wallet. It’s a simple design, but the game has several elements that I haven’t experienced before. Other titles were mostly cars, jeeps and novelty trucks, but Old School Racer 2 takes place on a motorbike and features some 60 levels accessible from a world map of challenges.

Accelerate with ZR or A, and brake with ZL or B., The difference with Old School Racer 2 and similar mobile games, however, is the fact that you can reverse. I’m still on the fence with this one, as the fun of these games was the momentum of always heading forward and not backtracking. In this case, the backtracking is to unlock the tokens spread out on each level, but sometimes the reverse element can help you muster enough acceleration to get over a big jump. Expect to get a lot of air in this game. 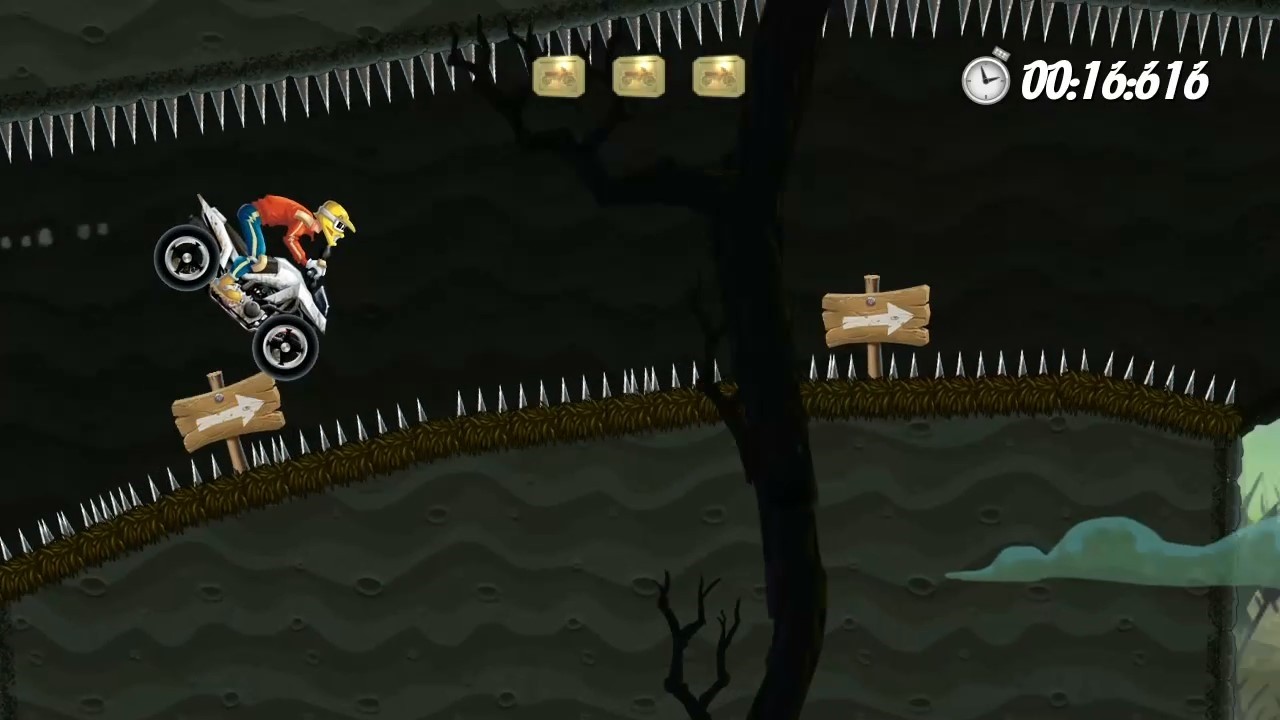 Unlike most stunt-like games, you aren’t awarded points for performing any skills like flipping your handlebars, pulling off a Superman move or even rotating your bike. The key factors, which remains throughout, are your balance skills and momentum. While in the air, you can position your landing – tilt forward too much and you go over the bars, lean back too far, and you’ll end up on your backside. The physics aren’t realistic, but they’re fun nevertheless and as much as you don’t want to end up in the mud, seeing your driver go full speed into a wall or getting midway up a loop, only to run out of juice then land on the back of your neck is comical. The level doesn’t end with each crash; if you fall off your bike, dust yourself off and jump back on. The process is quick, and there aren’t any loading times.

You’re bound to come off your bike a lot, mostly from not correcting your landing or a full-speed collision. The other common occurrence which I found more amusing than frustrating, was getting to the top of a hill and not having enough juice to make it over the top. Instead of shaking my controller about, I found it funny to see the bike roll back to the inevitable doom of coming off the saddle once more. While it didn’t make me mad, I’d be lying if I said I didn’t shout at the screen with cries of “Come on!” with the timer ticking in the top right of the screen. If you beat the level in record time, you’ll get a platinum trophy, through to bronze, to earn your bragging rights accordingly.

One of the standouts in the game is the morph ability. On certain terrains you can press the X button for the ground to open up, allowing you access to new areas and further progression. It’s a little tricky to get used to and unless you’re good at fluking, will require a ‘reccy’ of the level beforehand so you can time it right; otherwise, you’ll trigger the option and end up landing on your head. It makes Old School Racer 2 stand out from its peers, but I wouldn’t say it’s a game-changer as it would be just as good without it.

Unlocking vehicles come with completing the cup tournaments throughout the game. In addition to a new set of wheels, you can also upgrade the stats through the tokens you acquire in-game. These new vehicles look the part, but they also play a role for each level and have their perks and can help on some of the more gravity-defying levels where you are literally upside down for an extended period. 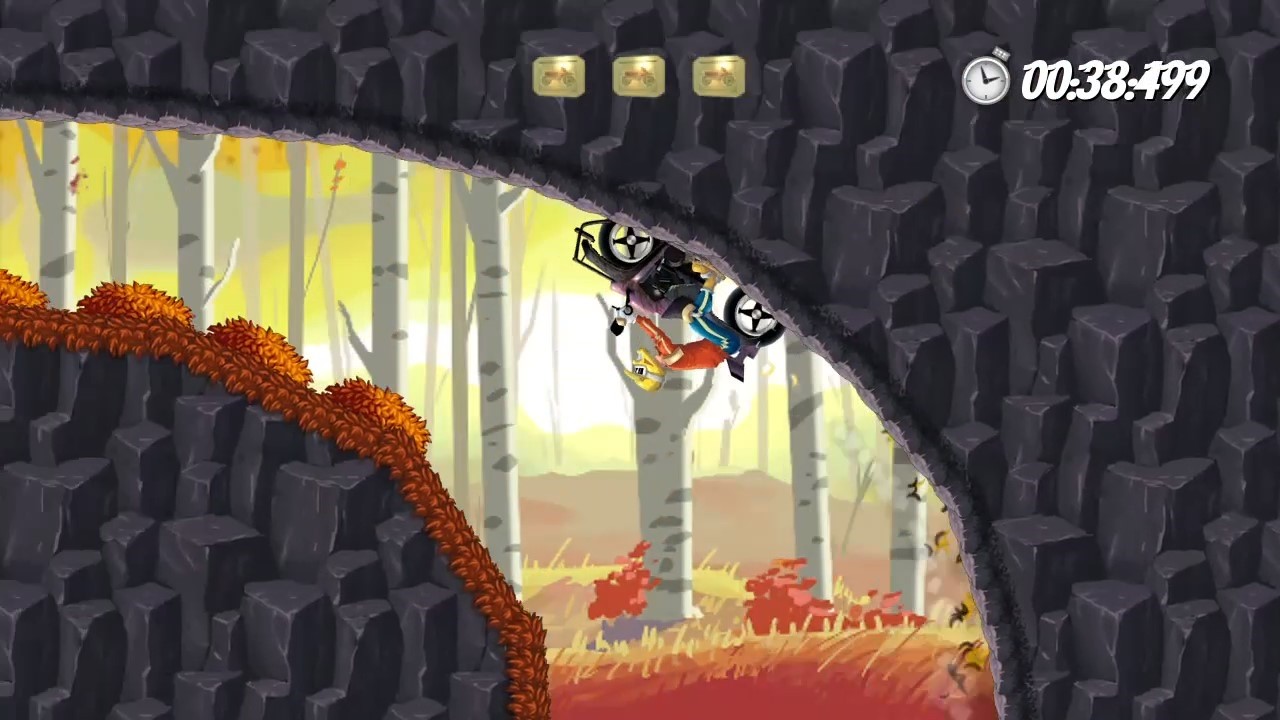 Visually it isn’t anything special, and I have to say that I wasn’t a fan of the main character. The helmet design and colour choice make the driver look a bit of a freak and would have benefited from alternative colours – not that you will be spending a great deal of time looking at your player, as you should be paying attention to the tracks. It’s a minor niggle, as is my next on the soundtrack: it’s a bit monotonous, and I grew tired of the repetition after the third or fourth track. The overall sounds effects serve their purpose, though, so again, just a minor niggle on the presentation side of things.

This tournament function needs to be mentioned. There are levels where you will compete against other competitors, but it isn’t precisely real-time, and there’s no collision detection involved as all the other players are ghosts. You can’t see the person on the bike, or the wheels, which is a bizarre omission, but it does give an inkling to where you are in the race and how you are performing. If you finish at the top, then you enter the prize draw for some new wheels, which you can further improve with upgrades and the tokens.

I wouldn’t say that Old School Racer 2 is one of those addictive games that you can’t put down, but I would argue that it might be on your playlist for the commute. Each level is relatively brief and has the same feel of pick up and play that the mobile counterparts offered, only this has just a tad more depth and feels a little more polished than the titles before it. It’s well priced, and as it doesn’t have the paywall that other titles of its ilk has on mobile, you’re more likely to stick this out and unlock all vehicles and upgrades, if not, to set record times. Good luck with that though, I barely got through most levels.

Suitable for on the go, or if you fancy something that is non-taxing on the brain, but challenging enough to hold your attention. The number of levels, unlockables and overall presentation of Old School Racer 2 get a thumbs up from me.