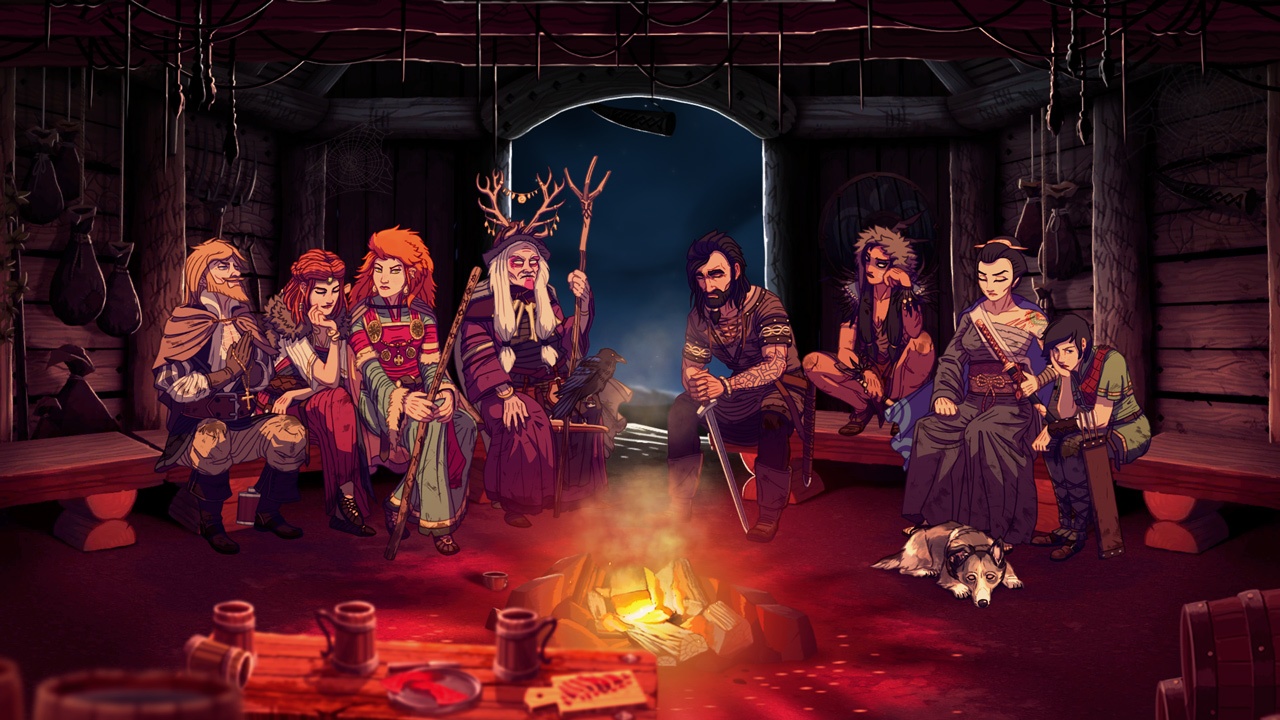 ​I know of Dead in Bermuda by title and art style, but I’ve never actually played it. Fortunately, ​​Dead in Vinland assured me that I don’t need to have played the other game in order to get the story for this one, though doing so ​​would make the experience a little easier. As I started up the game and made my very first choice to scold my negative Nancy of a daughter, resulting in a sudden spike in her depression level, and then a few more choices that resulted in injured and poisoned family members, I wasn’t quite sure I was ready for what ​​Dead in Vinland had to offer. For those unfamiliar, the Dead in games are turn-based survival tactics where you’ll need to manage resources, make decisions, and (hopefully) live to see another day. Dead in Vinland puts you at the head of a viking family freshly exiled from their homeland and stranded on an uncharted island.

​The days are divided into three phases: morning and afternoon, during which you’ll be able to assign tasks to your family of four, and the night when they’ll rest and recover. During the first two phases, you can place a family member in a station around your base camp. Depending on their stats, they’ll be able to successfully procure useful things like food, water, and crafted objects as well as uncover more of the island. As you progress, you’ll be able to interact with more areas and upgrade your facilities for higher chances of success. Each character has an obvious advantage over another at certain tasks, so you’re almost immediately locked into sending the same people to the same stations. Switching them up isn’t advisable as the chances of success, though subject to change as they gain more experience, is low. At night, you’re given more of the story while your family huddles around the fire. It’s now that you need to divvy up any food and drinkable water you have. Failure to do so will, naturally, lead to an early grave. 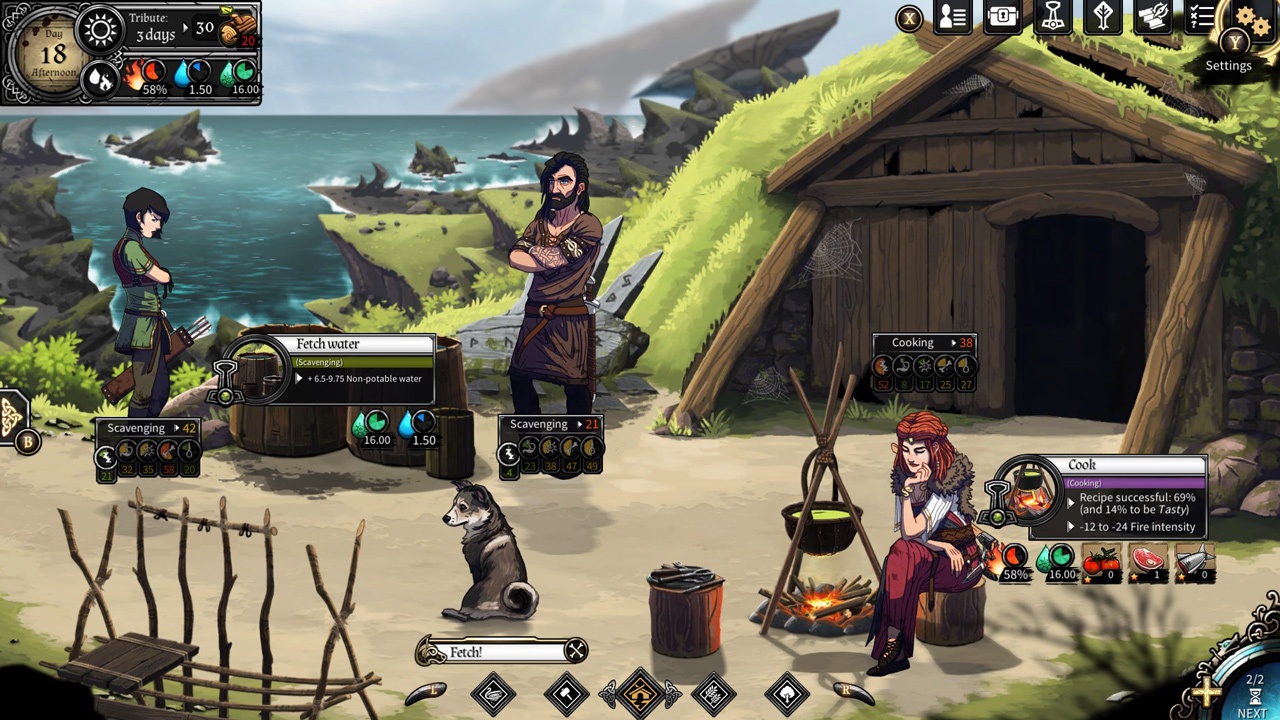 That being said, you’ll need to keep your eye on the level of your fire. Tinder is a rare and priceless resource and without fire, you’re not able to make potable water or stave off the chill of night, leaving your family vulnerable.

​If just one member of your party dies, it’s game over. There are a number of ways for your party to die–namely when any part of their health, which is comprised of fatigue, hunger, sickness, injury, and depression, reaches 100%. Another thing to watch out for is dehydration, which is where having a fire becomes so important. If a character goes on for too long while dehydrated, they die immediately. Depression is a stat that also escalates quite quickly, which means being careful what you say and also with what you’re subjecting characters to. Failure can be fatal in this sense, as it can tip depression into dangerous levels. 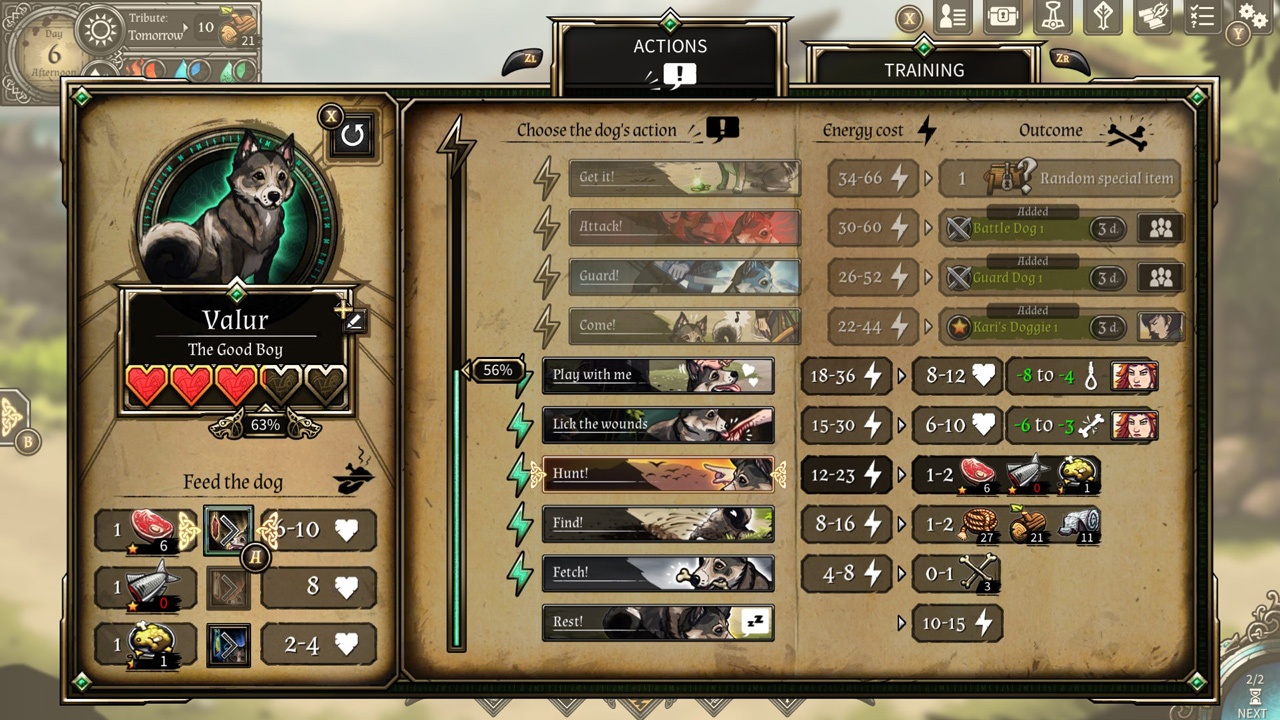 ​I personally found Dead in Vinland to be a little too stressful to be fun. I’ve played and loved Darkest Dungeon, which was fair even though it subjected me to the harshness of the RNG, but Dead in Vinland stacks the odds so high that it’s hard to see over them. Perhaps that’s just the unluckiness in me talking and you’ll have a better time about it, but it’s something to think about if you’re looking to sink some time into the game. There’s plenty to keep you occupied for however long you decide to keep at it, which is a definite plus, but that depends on your willingness to get up again after being knocked down.

While I quickly discovered Dead in Vinland wasn’t my kind of game, I can appreciate the depth of gameplay as well as the tactical and survival elements. While the controls don’t translate well from the PC version, it’s still possible to overcome that obstacle with some practice and determination. The weight of the decisions you make regarding your familial unit is realistic given your survival situation and they ultimately set the tone for the rest of the playthrough. Careful allocation of resources–including manpower–is key here and if you’re the type who enjoys keeping track of statistics and have a bit of a masochistic streak, Dead in Vinland may be the game for you.

Careful allocation of resources–including manpower–is key here and if you’re the type who enjoys keeping track of statistics and have a bit of a masochistic streak, Dead in Vinland may be the game for you.