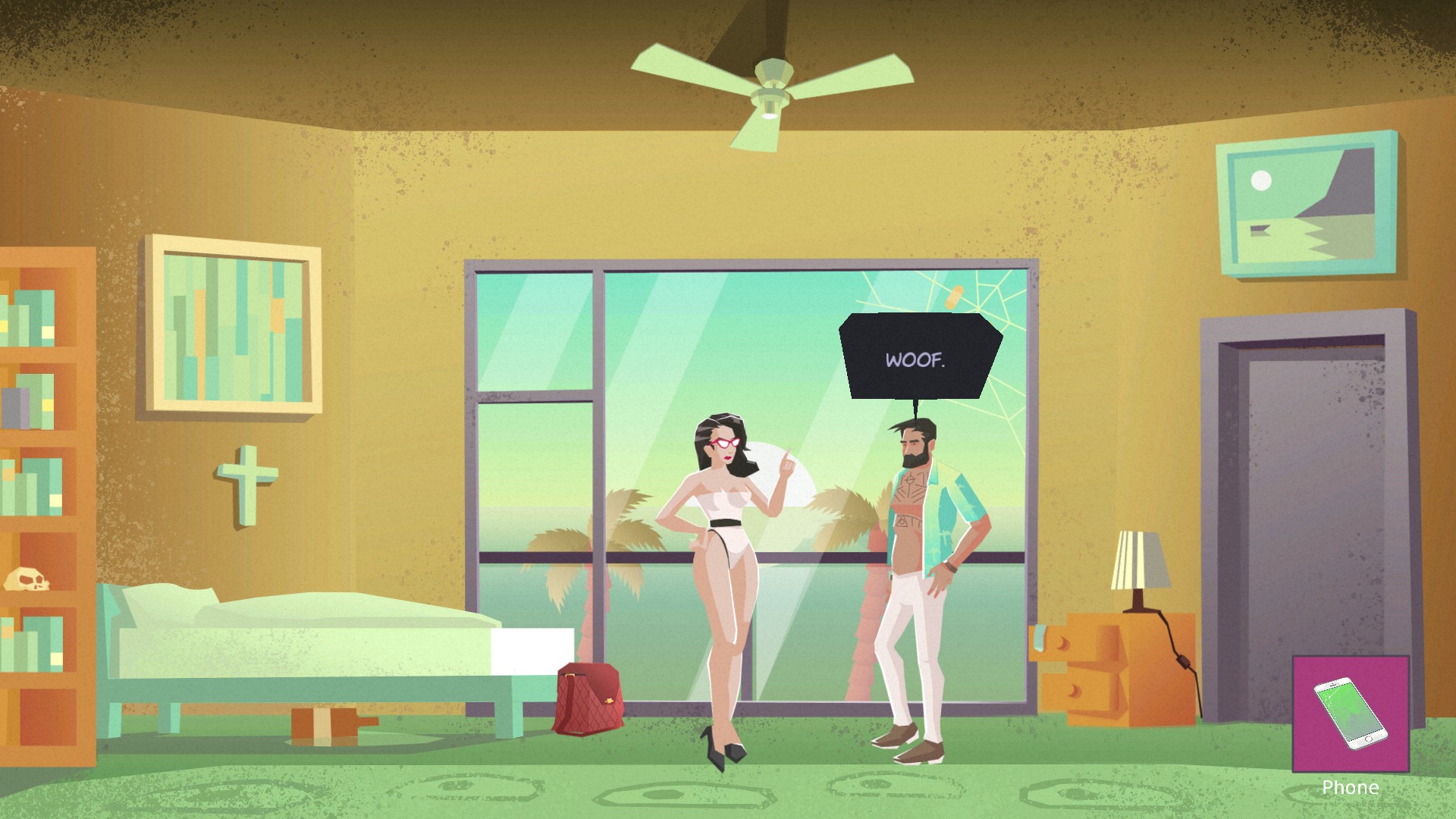 There isn’t a single thing in this world that’s above the call of lampoon, satire or parody. Though there are plenty of oddly proportioned pearl clutchers in the world that would shame us for calling Christianity into the crosshairs, there is plenty of great room for fantastic humor when the subject is broached correctly. That, I think, is the inherent flaw with some blasphemous (or at least irreverent) humor is that it tends to be very “edgy” without having any real payoff. When I think back to the stuff that I would write when I was a teenager trying to be an outsider and shocking, I cringe so hard you’d think I was being electrocuted. But, when put in the hands of people like Monty Python, Kevin Smith and Terry Pratchet, the experience is memorable and uproariously hilarious. With Cat-Astrophe Games, I believe the target was somewhere between cheeky jokes, referential humor and a loving homage to the adventure titles of the 80s and 90s, mostly because that’s what they deliberately say on their website. However, with The Unholy Society, the arrow hits the mark, but it doesn’t really give you a satisfying “thud.”

Bonaventura Horowitz, is, apparently, a priest and an exorcist, but he’s one of those bad boy priests you hear so much about. You know, drinks constantly, sleeps around, drops curse words without a second thought: a priest who, by all accounts, should not be a priest. Anyways, Bon is just minding his own business, fighting off a succubus he met on Tinder, when he is called home to attend his sister’s wedding. He didn’t know his sister was engaged (or, as it turns out, pregnant), but hurries home to officiate the ceremony and hopefully patch up things with his estranged sibling. This plan immediately goes off the rails when the groom dies, and now Bon is up to his eyeballs in dark plots, sinister cults, talking animals, Antichrist portends and immediate, unexpected endings. 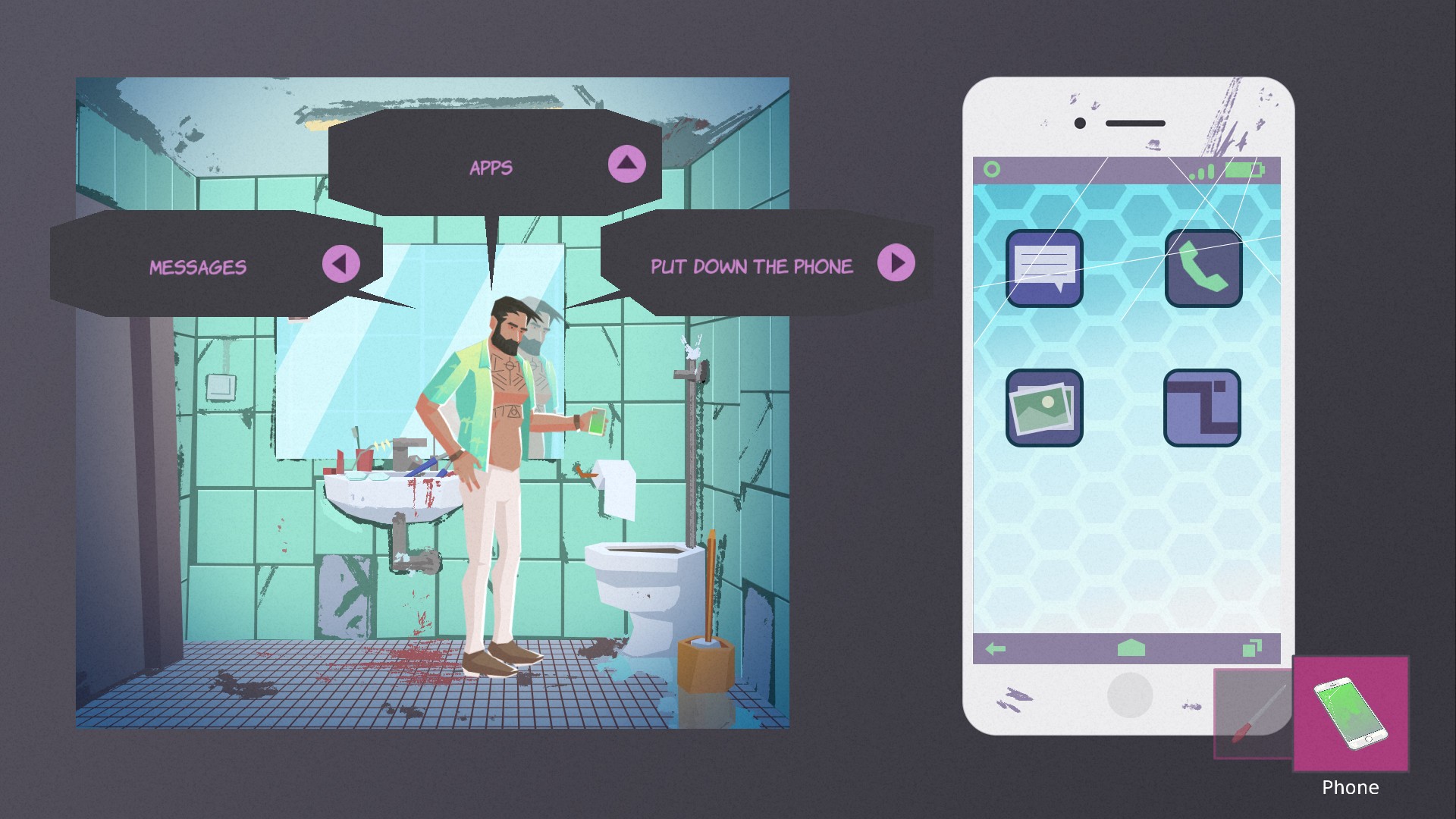 You should know, because I sure as hell didn’t, that Unholy Society is only chapter one of a future saga, and, as a result, you’re ultimately getting only a taste of whatever it is the devs have in mind. While the ride is a decent one, players should know they’re being tasked with the weight of having a lot of details not really flushed out, nor some points fully explained, and a lot of stuff at the end of this relatively short ride (maybe one hour) rushed together. I honestly thought that we were going to be seeing more within this first package, especially considering it weighs in at a gig and change, but that’s not the case. The result is a bit lacklustre (hence the “thud” I said was lacking), but it at least gives some potential to what could be coming.

Presented in a side scrolling adventure setting, you control Bon as he sets off to figure out what exactly happened that brought him back to his hometown of Silent Virginia and get some answers. You have the traditional controls: you walk side to side, climb up and down ladders, and “sprint” by grabbing a skateboard and moving forward, which you can do at almost any time (including when your very pregnant sister is trying to walk after you). The game is really divided into two modes. The first is this, where you get to examine items, talk to people, and pick snarky replies that fluctuate between sincere conversation and expletive laced explosions. Neither changes the course of where the story is going, but feel free to reload and see what different responses get you. You have to do a couple of small fetch quests, in which you must bring items for certain people or combine some things to make others. You know, standard adventure game stuff that’s meant to click naturally for veterans of the genre.

With Unholy Society, nothing in the adventure game vein is difficult, or even obtuse, and some of it is downright lazy. There’s a little bit of song and dance to put together a disguise to sneak past the police, but that requires no real thought or execution: as long as you know how to get tab A into slot B, you’re golden. At one point, I needed to retrieve a shrubbery for a rat, which seemed like a fun quest, until it turned out that I just needed to walk back to where I was (maybe one screen’s worth of walking), and pick up something that was there previously that I couldn’t see until I talked to an NPC. Then I brought it back and that was that. I might as well have bent down and picked up the bush from directly under the rat for the amount of effort it took. And remember when I said it took about an hour? That included going in the wrong direction a couple of times, exploring for the hidden comic books that are scattered throughout (not many, but they exist) and talking to cats almost nonstop because the first cat I talked to had a cool easter egg, and I hoped subsequent ones would too. No dice. 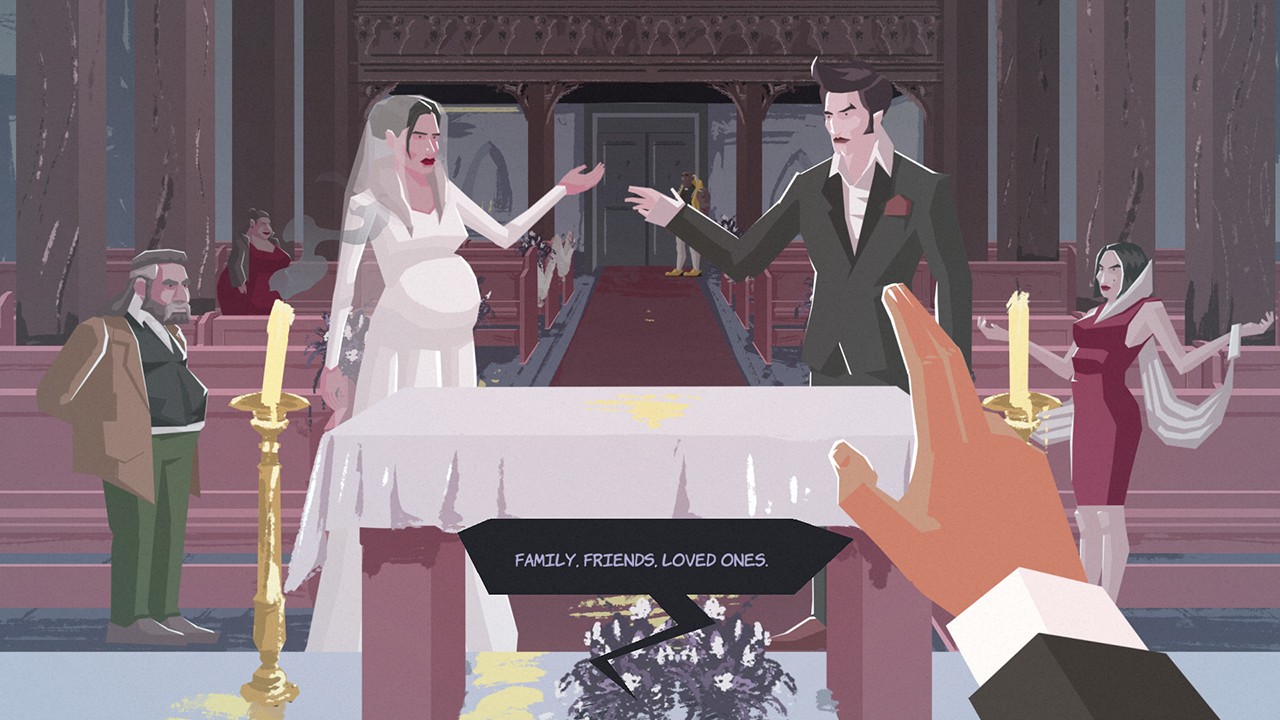 Dialogue with the NPCS in Unholy Society is decent, and it has its charm. Again, people fluctuate between being sincere and profane, and the number of cultural references are pretty scant considering where I had my personal bar set. There were a couple of jokes, a Police reference, the aforementioned shrubbery (which was preceded by answering three inconsequential questions to cross a bridge) and…I guess a couple other forgettable things. One of the reasons that I wanted to dive into Unholy Society is that I thrived off the clever punnery and snarky witticisms that made the Sierra and Lucasarts days some of the best in my gaming history. There were moments of brightness in this game, sure (I did like the bizarre interaction with the man with the glasses), but a lot of it felt a bit gritty and flat, like they were trying to lean harder on the absurdity of the story without injecting enough actual absurd dialogue or situations. In short, there was too much seriousness and too much of an expectation that the abstract of a cussing exorcist priest dealing with his pregnant sister marrying someone who looked a lot like the main vampire from Twilight to carry the proper tone. Which it did not. The story just sort of wildly flails from one point to the next, barely giving you an opportunity to assess what’s going on before you get grandly swept away to the next point, however disconnected it may seem.

Another major issue with the Unholy Society is the combat system. You are allowed to choose up to three attacks before entering an exorcism with certain entities, and the whole deal is using a magnifying glass to find the right symbols to execute an attack before the timer runs out. So, a light attack is a cross and an energy symbol, a medium is energy-cross-energy (in that order), and so forth. But the appearance of the symbols is totally randomized, both in which symbols appear and location. Plus, the fourth attack you learn, a sort of healing spell, institutes a pentagram symbol which doesn’t appear at all in the previous three attacks. So there were several times where the pentagram ate up a valuable slot for the light, medium or strong attacks and caused a whole round to pass without anything happening. This would be more consequential if combat was a.) more frequent and b.) more stressful (even the last boss hits pitifully light), but it’s still annoying and a rather broken system. If you’re using one of the pentagram attacks, cool, let the pentagrams spawn, but don’t have them show up when they’re irrelevant to the round.

Overall, I’m just disappointed with The Unholy Society. It had potential, and there were certain elements I enjoyed (the art styling is lovely and good jokes are rather good), but there’s so much that’s muddled and falls flat that it’s hardly worth your time. Ten bucks for the first chapter isn’t a horrific ask, but you don’t know the game is, essentially, incomplete until you reach the end. I think CAT-Astrophe Games should lead with this so everyone can temper their expectations accordingly. If you’re interested in the idea, know the combat is random and strange, the humor is sparse (but decent), and the load screens are longer than I’d like, especially starting up the game. There’s potential here, but we need to see the full picture of Bon and his (mis)adventures to fully appreciate it, and this photo is certainly under developed.

I need a young priest and an old priest to tell me what I just played and what I’m missing.