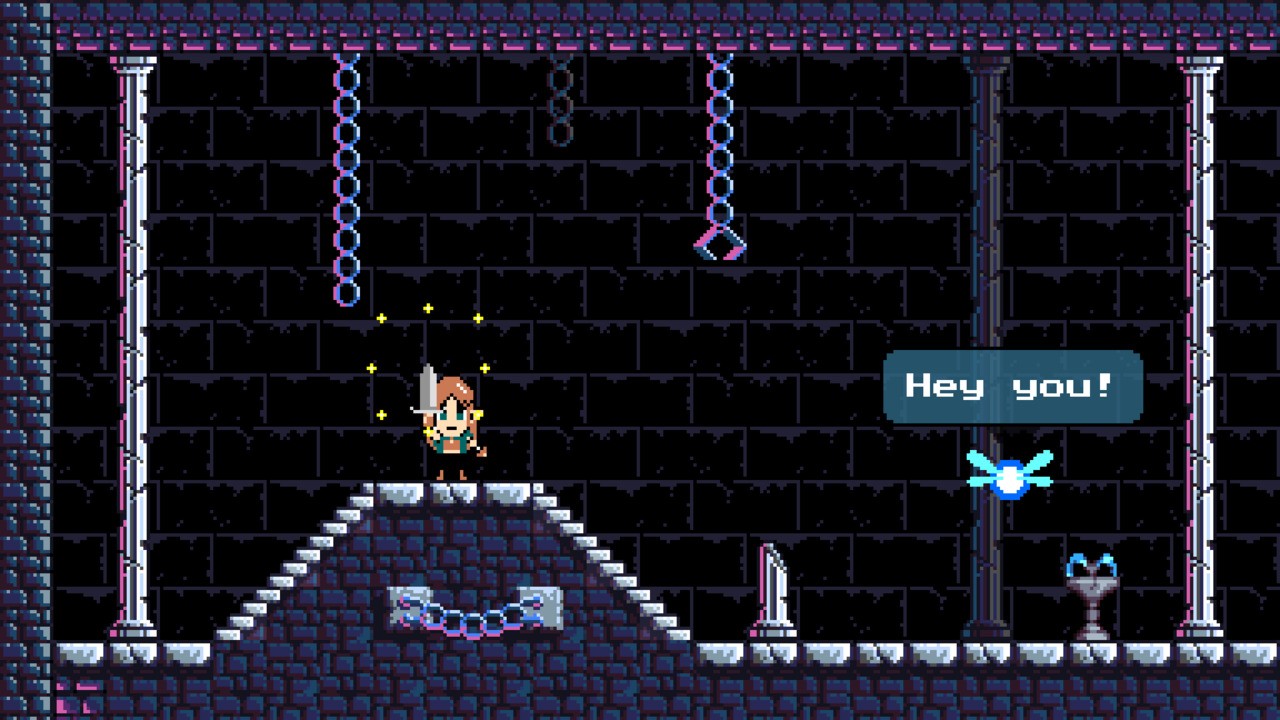 Recknum is a recent release on the Nintendo Switch from Catalonian publishers Jandusoft and developed by fellow Spaniards Nape Games. The game has a number of strings to its bow, describing itself as an action-arcade, platformer RPG, it also contains some puzzle solving elements.

The general premise is the tried and tested “find/destroy the magical maguffins” quest. You play as Cheri, wielder of the sacred claymore, who traverses a number of lands in which to destroy the sacred crystals and release the kingdom from the clutches of the evil sorceress. Each land is filled with enemies, traps and puzzles to overcome as you defeat bosses and restore peace to the kingdom.

The game starts with a brief tutorial level reminiscent of Legend of Zelda, removing the sacred claymore from it’s pedestal while a small blue fairy tells you to listen. Within moments you are learning the relatively simple controls as you jump, slash and shoot your way to the entrance of the temple and out into world 1. 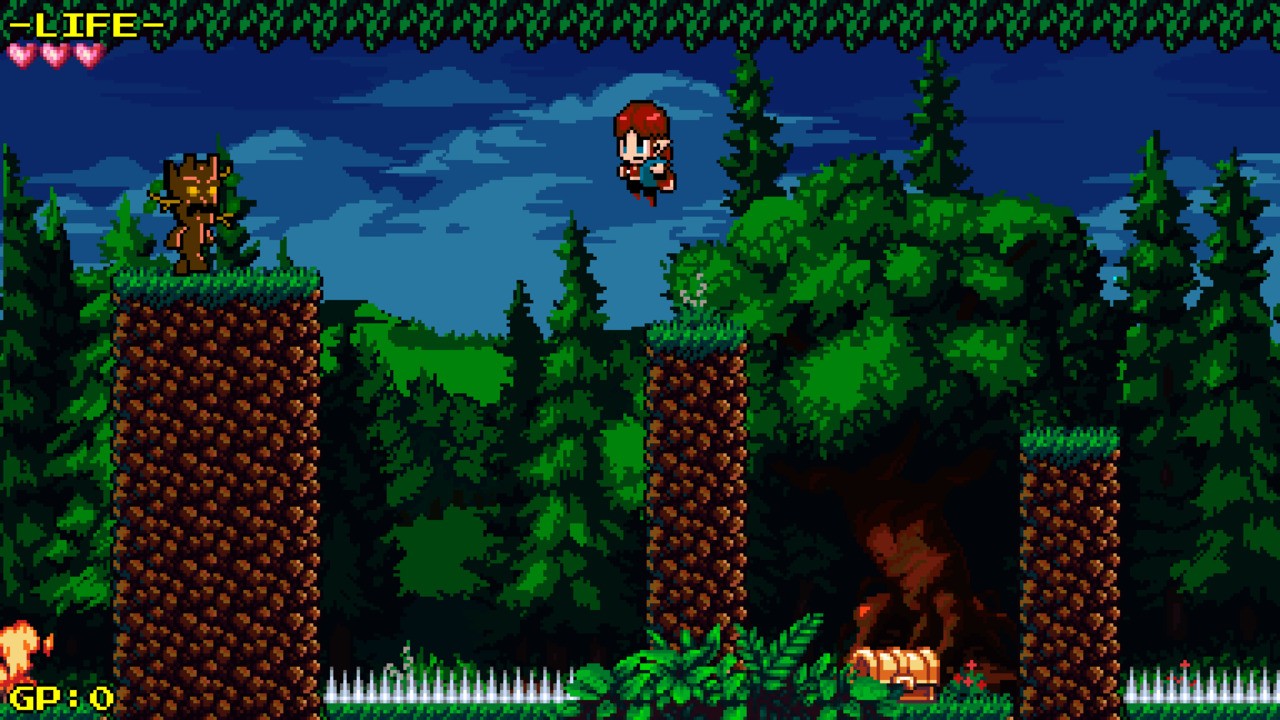 The controls consist of slashing with your claymore, firing arrows, running and jumping.  Cheri is able to wall jump off structures which helps in scaling some of the more difficult to reach platforms. Enemies range from ground based to flying and it quickly becomes apparent that some enemies are dispatched more efficiently with different weapons. There are also traps and obstacles in place to ensure you are constantly vigilant to your environment. Eventually you will encounter an exit to the next stage or a boss battle to complete in order to progress.

The gameplay is split into multiple categories. As a platformer, the game can best be described as doing what it sets out to. The platforming sections are relatively well thought out, but can be both repetitive in style and at times require precision jumps. This would be fine except the controls at times feel a little sluggish, not game-breakingly slow, but enough to remind you that you are swinging a claymore rather than a rapier for example. I would recommend using a controller with a better D-pad than the standard Joy-Con, as you will naturally gravitate to this over an analogue control.

The biggest issue for me as a player is the insta-death applied when Cheri hits certain obstacles, such as fire or spikes, or is caught in a trap. Whilst this was a tried and tested mechanic in games gone by, this simply makes no sense in a modern game. I frequently became frustrated with having to start from a beginning of a stage when almost at the end simply because I was too close or had mistimed a jump. Thankfully, the game has designed itself so that getting harmed by bosses allows you to start at that boss fight, but this is a design choice that will detract from the enjoyment for a lot of players.

In terms of the RPG elements of the game, these are simple at best. Breaking open a chest, which flies across the floor on contact so plan your openings carefully, releases various gems which increase the supply of gold, an easily lost commodity. But more importantly the chests yield items that increase your speed and jump stats or allow Cheri to perform double jumps, making the platforming areas considerably easier. 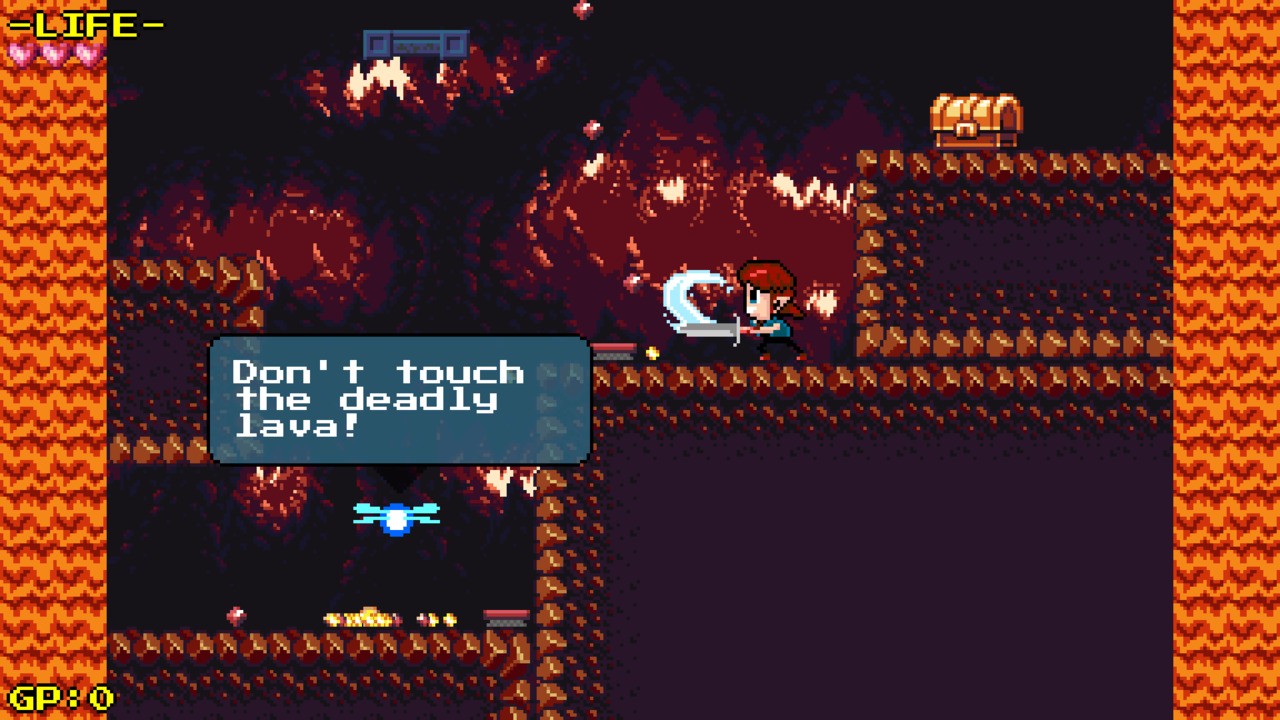 The art style is a beautiful mixture of 8-Bit sprites with 16-bit background arts and is reminiscent of games such as the Wonder Boy series. This is combined with a lovingly crafted chiptune soundtrack. The aesthetics of the game are clearly a love letter to games gone by, but when you consider the repetitive nature of the levels, the cycling soundtrack can get a little off-putting after a while.  Finally, the game is interspersed with anime style art to signify the defeat of a boss or during both the introduction and the post game credits. These are also a call back to cartoons/anime of the 80s/90s and add a really nice nostalgic touch.

For the hardcore retro gamer, Reknum provides little challenge, and will be completed within a few hours at most. For the more casual or unfamiliar player of retro gaming, the inclusion of insta-death to prolong gameplay creates a frustrating and needless challenge which is designed for no other reason than to increase play time. Whilst it is endearing to want to keep to the traditional tropes of yesteryear, the need for those mechanics has long since passed and for gamers who have grown up alongside these games their appeal has long since faded as their free time is more limited than ever. The game does offer an autosave function, however this does little to provide relief when having to start a level a few steps from the ending.

Overall, Reknum is a game I wanted to enjoy more than I did. The pull of playing a game that reminded me of games like Wonder Boy and Alex Kidd soon fade, when you realise that the challenge and difficulty only lie in the precision of jumps and the avoidance of insta-death. Boss fights aren’t complex and can often be completed, at range, using the bow and arrow and there is little to no replay value.  The songs and art style are something that initially excite a player, but quickly become just a part of the overall package, and when you look at what has been created in recent years in retro style games such as Celeste, Dead Cells or even older games such as the Scott Pilgrim movie game, it shows that there is a high bar to reach, regardless of studio size or budget.  That being said, Reknum is an OK game that many retro gaming fans will enjoy and move on from, but anyone looking for a hidden gem might want to wait until a sale, or pass this one by until their backlog is clear.

Reknum is a recent release on the Nintendo Switch from Catalonian publishers Jandusoft and developed by fellow Spaniards Nape Games. The game has a number of strings to it’s bow, describing itself as an action-arcade, platformer RPG, it also contains some puzzle solving elements.  Overall, it is an OK title that does little to set itself apart from others in their respective genres. The accompanying art and the chiptune music are a nice touch, but not enough to hold the interest of hardcore retro gamers, who will find this a quick and easy game, nor players new to retro style gaming, who will be put off by needless insta-death and painfully precise controls