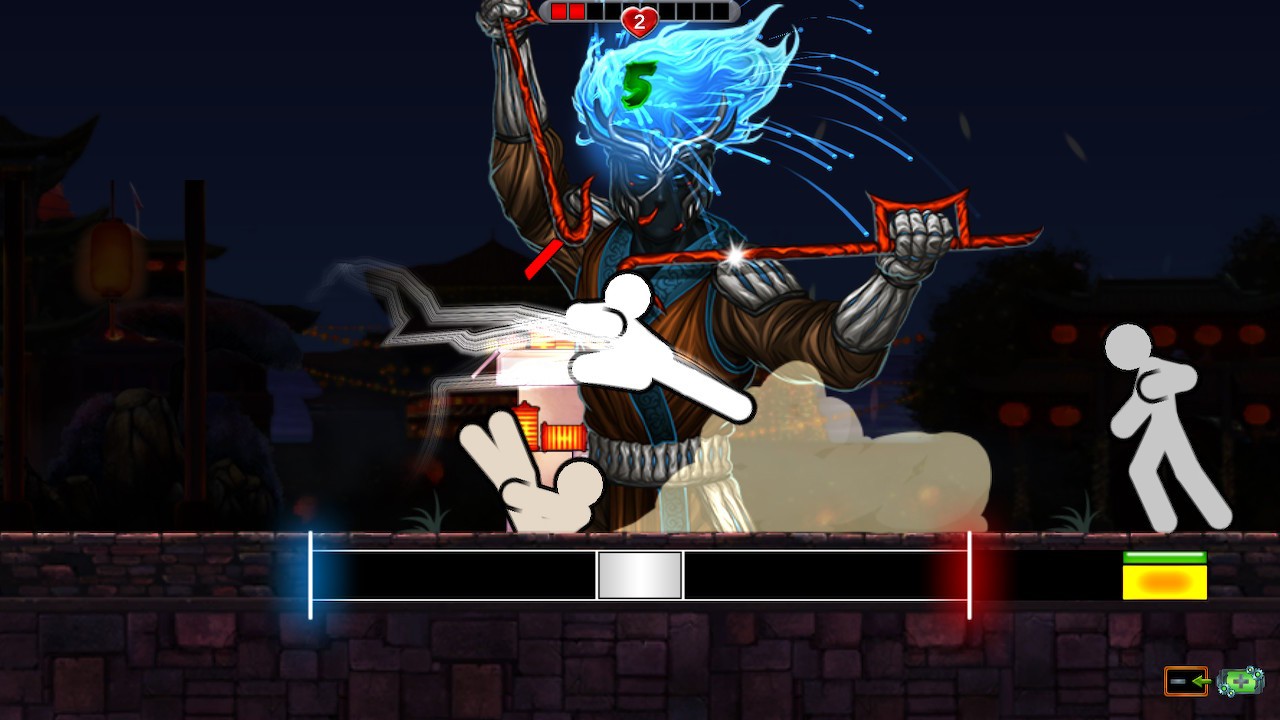 There’s this belief that, if you’re only going to do one thing in this world, you might as well do it well. So if you’ll only spend your whole life making clay figures of small children pretending to be animals or whatever, make that so damn good that every bored housewife of the 1960s will spend their life savings to completely fill their mantles with these cherubs, instead of filling their lives with anything meaningful. There’s a special kind of magic when you get a singular idea and you drive it home to the point where you’re almost impressed that something can exist and be admirable while still having nothing of substance. I’m talking, of course, about a little game called One Finger Death Punch, and how it has a sequel on the Switch called, cleverly enough, One Finger Death Punch 2.

This is one of those games that looks like it spawned from the Flash generation of games, where high school and university students would look for literally anything they could do in lieu of actually researching or studying things, which is why it’s shocking the first was actually an XBOX 360 exclusive. As you might imagine (based on what I just said about appearance), the premise of the game is incredibly simple: you play a stick figure dude who has to fight off wave after wave of enemies. You don’t need to worry about clever button combinations or incredible move sets or anything like that. Hell, you can’t even move left or right, forced to stay in one position for the duration of the game. Instead, you hyper focus your whole being into two important buttons, Y and A. You use Y for things coming from the left, and A for things coming from the right. That’s all. I’ve now explained everything you need to know, fundamentally, to play the game to the bone. Have fun. 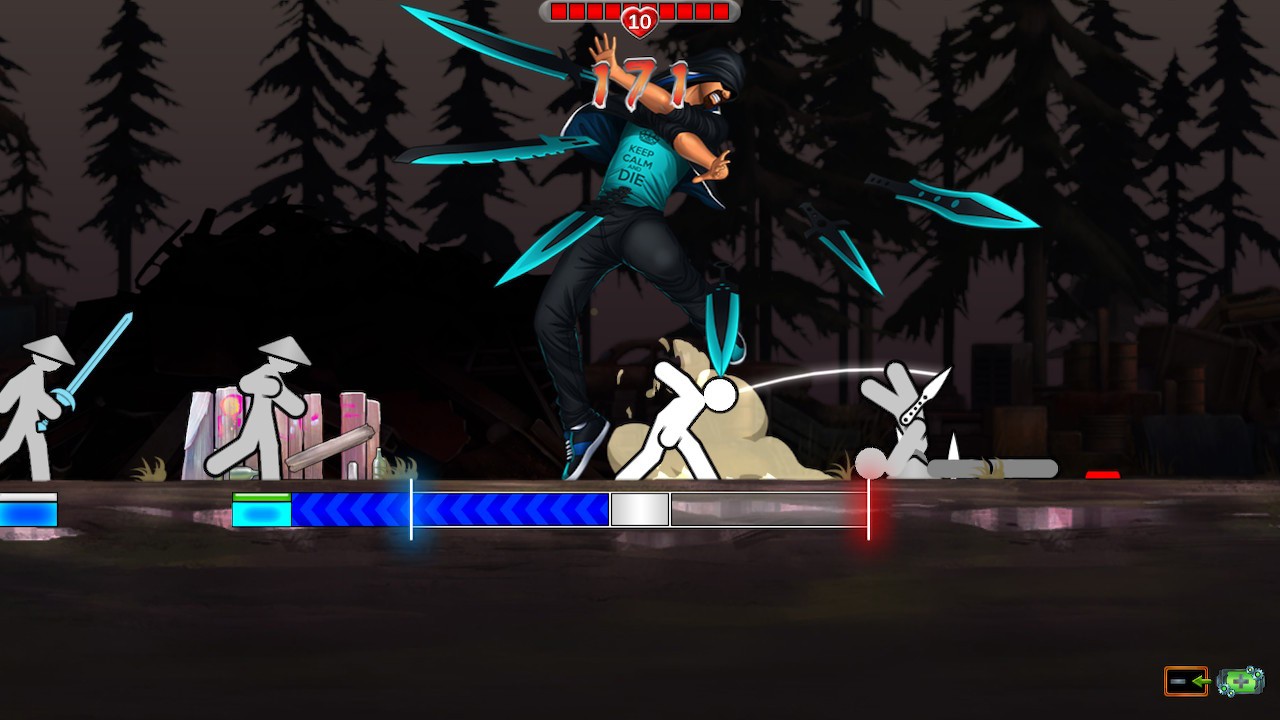 Actually, One Finger Death Punch 2 does a lot more than just push a button. You only push those two buttons, yes, but there’s a shocking amount of variety in that simplified idea. Firstly, the hit box where you can attack is surprisingly small. You don’t get to simply mash the buttons over and over and call yourself a warrior (the game specifically calls out No Button Mashing at the beginning). Then there’s the matter of actual combat strategy. For example, you’ll run into enemies that require two hits instead of one (thus totally defeating the purpose of the title of the game). There are enemies who’ll roll out of the way of your initial attack, forcing you to come at them with a second attack to finally put them in their place. Then there’s the projectiles, and these come in all sorts of flavors and colors which make all the difference. Some projectiles you dodge and they hit other enemies. Some you catch and then use on other enemies. Some you deflect back at the attacker (or another enemy who’s a tad overzealous). And the weapons themselves range from shuriken and throwing knives to assault rifles. This adds some flavor and flair to the game, and believe me when I say that flair is all that makes this game work.

You see, I got pulled into One Finger Death Punch 2. Hard. As in, I looked at the clock and realized I had been playing this game for FOUR HOURS straight, and I was exhausted. This is possible because the game hits you solidly and unrelentingly, and you feel awesome because of it. The animations that take place are hilarious and over-the-top, injecting tons of blood, broken bones and inexplicably violent “fatalities” through stick people, which you don’t have to leave simple and plain. There are options to add color and detail to both your own avatar and the enemies, but I don’t know if I’d recommend it. For one, the additional detail is distracting when you really get going in long jags of the game, and, for another, I could never get it the way I wanted. At the end of the day, it’s still a group of oblong stick men that I hit so hard, that ribbons of blood fill the sky and danced around like graceful death Olympians.

One Finger Death Punch 2 is a game that absolutely celebrates the perception of “extreme” and “kung fu” in ways that tickle and delight the part of your brain connected to fist pumping when you watch old martial arts films from the 70s. There’s a constant presence of things like exploding background items, fire for no apparent reason, tigers showing up to prove how hard you hit something, and a soundtrack that’s caught between heavy metal and “mayhem but music”. You divide the stages into arcade style (mobile arcade) levels where you get awarded stars based on how well you do, and the awards are pretty lenient, all things considered. You get the same ranking if you get punched zero times or three times, so don’t be too hard on yourself when you get lost in the rhythm and can’t figure out if you wanted to deflect that arrow first or deal with the rolling blue guy. Once you get those great combos going and you defeat an enemy that requires a long sequence of hits, you can do an attack that can slide all the way to the left or right, repositioning yourself and occasionally buying some much needed breathing room. 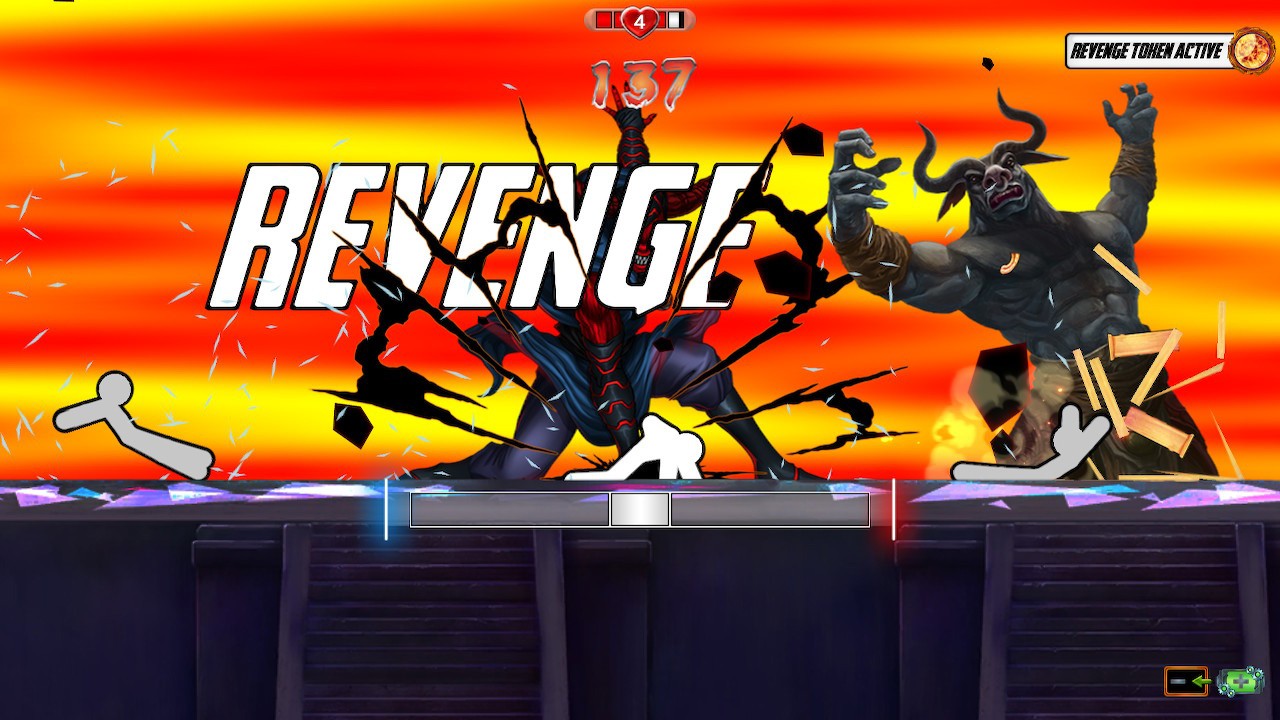 If you’re super into it, feel free to go into things like survival mode and see how long you can deal with the onslaught of ninjas and baddies, and prepare yourself against future boss fights, which are enemies that require like eight or nine hits to deal with. But don’t expect to break your back on things like this. One Finger Death Punch 2 comes in a single flavor with a single intent, and both of them are carnage. This game is infinitely more appealing to me than similar titles because it doesn’t try and gussy things up with additional details or combat equipment or anything silly like that. Honestly, the biggest downside for the whole game is the install size. I couldn’t believe my eyes when I realized something that is so basic in gameplay could come in at two and a half gigabytes, but all those music samples, explosions and diverse backgrounds, I guess I could see where it comes in. Seriously, from the streets of Japan to what looks like the back alleys of Russia, the amount of detail put into making a backdrop for stick figures to have a deathmatch is almost insane, but it’s well done and tasteful (or as tasteful as it could be).

There are a ton of levels. There’s endless mode. There’s customization. And there’s the fact that you really can get pulled in for a minute or a day if you’re not careful. One Finger Death Punch 2 is chock full of content for veteran and new players alike, and you should honestly consider it if you’re even remotely interested in this sort of game, where you get into a groove and just let your brain disconnect, it’s a ton of fun. Plus, on the Switch, it’s a lot easier to fall asleep playing it than with a tablet smacking you in the face as you nod off in bed.

For the highly trained killing machine in everyone who still likes to keep it simple.