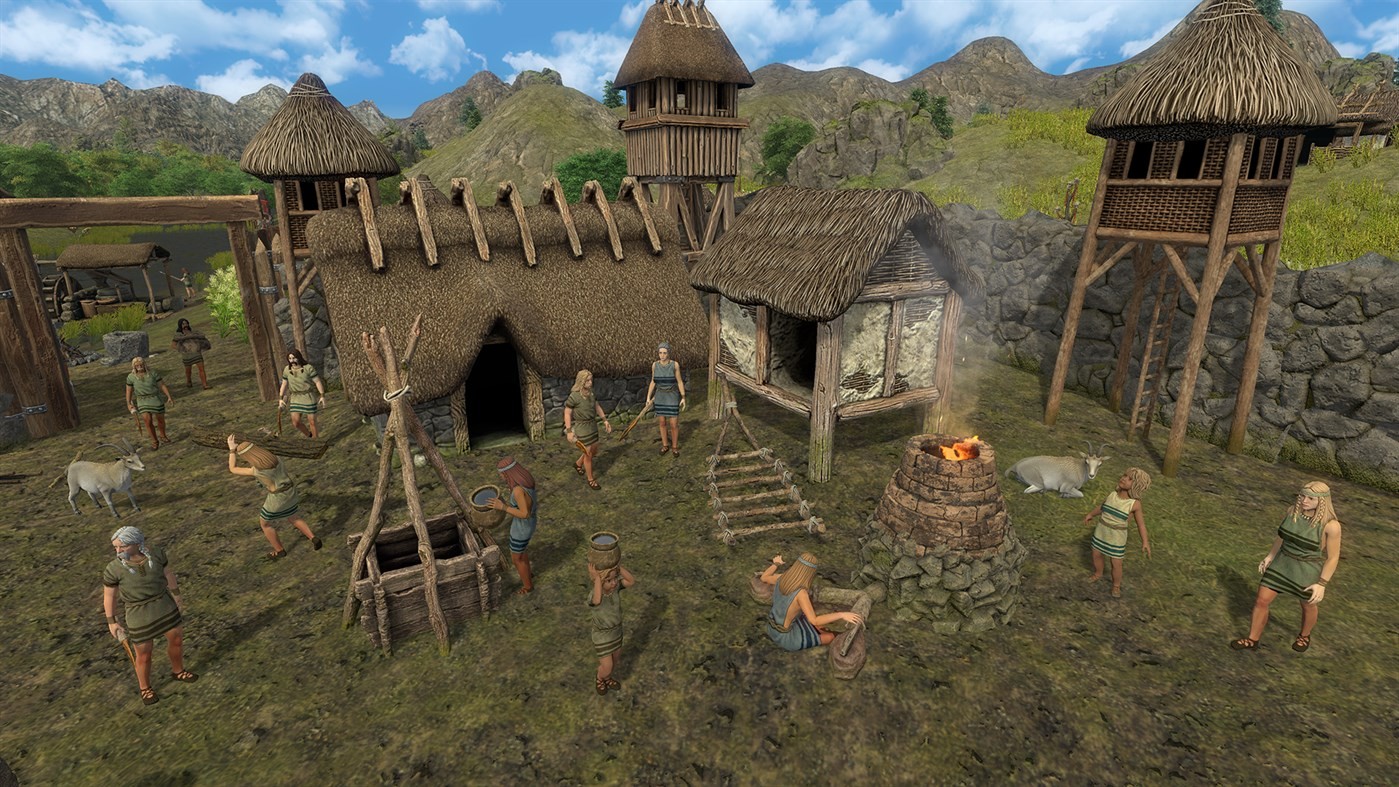 Dawn Of Man published and developed by Madruga Works, a real time strategy game with city building and survival elements. The RTS genre is absolutely saturated with both excellent and mundane titles, can this game place itself high up in the order of greatness alongside such titles as: Civilization, Settlers and Age of Empires. Will it be destined to hit the sale and sit in your games library waiting to be played?

You are welcomed with a delightful prehistoric sticks and stones Village, your small tribe awaits your guidance to help to survive and flourish. With your aid the rudimental villagers will thrive to evolve through the ages. As with all RTS and survival games the path to glory will be a rocky one thwart with danger. You must push your people to the limit of their abilities, fans of the genre will know that both the biggest rewards and risks occur only when you truly stretch yourself to the limits.

I soon learnt that I shouldn’t become too attached to my villagers. The developers had come up with numerous ingenious ways to have your tribes people decimated. This may seem that I’m bitter about the situation, I’m truly not. The loss of your people in weird and wonderful ways really helped me to create stories within the game, and kept me alert to the number of risks. Even the simplest of tasks had to be considered, weighing up the gain Vs the loss.

My first play through was punctuated with moments like this, I believe it’s important to highlight them, as with most games in this field the loss of many of your people, or a catastrophic disaster can signal the end. Not in Dawn Of Man. As long as you focus on the fundamentals of survival, then you always have a chance to regroup and rebuild.

The first of many disasters started on what was a glorious day for my nomadic people. The elders were gracefully gathering sticks and drying skins to be used to build the new huts, new villagers had joined my clan to increase my population, and the sun was shining. What better day could there be for a hunt of the local wildlife? Up steps Geoff (not his real name. I unfortunately never got to know this heroic warrior’s name). A group of wild boar had been meandering across my lands, lording it up for far too long, I decided action must be taken. Geoff would be the man for the job, a talented huntsman, who had never let me down in the past. He quite literally always brought home the bacon. He set off to complete a task he had done so many times before; spot the boar, kill it, skin it, and finally eat it. This day was a day like none other. As he set out the sky’s turned a foreboding shade of grey, storm clouds lingered over head. Geoff was upon his prey, spear in hand, ready to slay one of the unsuspecting beasts, then disaster struck. Lightning shot from the sky frying poor Geoff where he stood. The tragic loss of a fine villager, struck down in his prime, and what’s worse we had no boar for supper. What further compounded the matter was that no one mourned the loss of their fellow tribesman. His body disappeared before it could be rescued. He either decayed or was eaten by Wolves. Wolves are key to remember, and form the backbone to the mountain massacre that followed on from this tragic day. 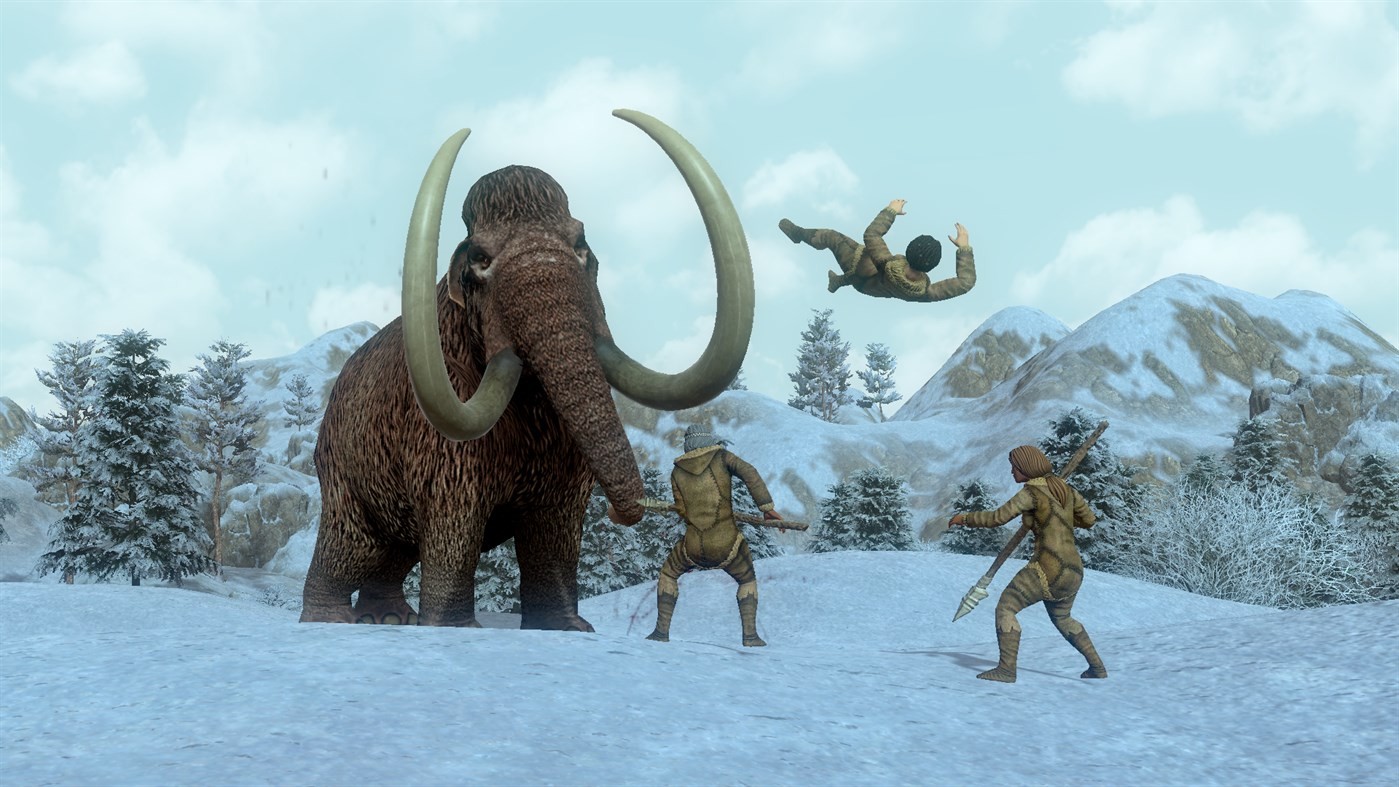 The mountain massacre happened a number of years later. I decided it was time to expand my territory, perhaps even find a new location that we could call home. I scouted out a potential location and discovered that it was writhing with berries and fruit bearing trees. My people hadn’t eaten anything but meat and stale bread for years, so being a generous overlord I decided I’d treat them to some baskets of fruit. I did fear that perhaps scurvy would set in if I didn’t sort out their diets. A plan formed in my brain, protection in numbers. The journey was arduous, several rivers had to be crossed, and a number of mountains climbed. 8 of my strongest villagers would be selected to complete the task. A path was identified and my people set out to find their new work zone. They were blissfully unaware of the horrors that would unfold. As the group traversed the open mountain range a pack of wolves lay in wait. I’m not sure they were protective of the fruit, but they weren’t happy with the tribe stumbling through their territory. This was the beginning of the mountain massacre. I lost 8 fine men, women and a child on that day. Like Geoff their bodies were never recovered. They disappeared, perhaps as wolf food, maybe they decayed? But for certain no-one mourned their loss.

Beyond those great tragedies my people thrived, we built strong, safe homes with defences. These later protected us from the raiders that arrive at the end game. No longer do my people struggle to move heavy objects, knowledge of horse and carts, and sledges help ease the burden of the heavy loads. Bridges have been built to span rivers that once had to be swam across. Life gets easier as you evolve through the ages, the disasters and setbacks are a distant memory.

Dawn Of Man starts at a very relaxed pace. You are afforded the luxury of familiarising yourself with the game’s basic fundamentals before getting weighed down by the rather clumsy strategy management system. Once you get to grips with the resourcing method the automation becomes pretty simple, but there is a fine balance in the system to ensure your people focus on the tasks you wish them to complete. The clunky nature of the UI rears its ugly head in the combat system. Unfortunately, this is just one of the minor negatives from porting a game from PC.

The visuals of the game are great, the giant prehistoric beasts that you encounter are instantly identifiable, the developers have done a great job implementing a threat mode. This will allow you to understand the risk level to your tribe when you decide to hunt certain animals. The graphics in this type of game are the least of my priorities, I look more to the clarity of objects around me and the scaling of the text. One of my pet hates is not being able to read the narrative or hints from the comfort of my sofa. Don’t get me wrong its great fitness having to walk to the TV to read the blurry dialogue, but when I sit down to play that is exactly what I want to do. Luckily Madruga Works has nailed both these areas. A gaming world which can be easily viewed from all angles, and zoomed in and out to suit your style. The artistic lines of the landscape are clear and the resources easy to spot. The colours used match the era and environment, neither are too bright or too dull.

The control system used is pretty easy to pick up, all the button mapping is shown on the screen so it’s easy to recall. As already mention the UI is a little clunky. A number of sub menus hide buildings and it takes a little playing around to master it. Understanding the village management screen is probably the hardest area to get to grips with, but once you have that moment of realisation then the game flows quite nicely.

The old saying goes less is more, and this is certainly true for the audio approach in Dawn Of Man. I’m a great believer that sound and music makes a game, and I wasn’t left disappointed here. The simplistic approach where the atmosphere is built from the gentle ambient sounds of the wild. Key tones help identify when tasks are completed, helping to keep you focused on the jobs that need doing.

I’ve already alluded to some of the game play when depicting my tales of despair and loss. Dawn Of Man has taken some key elements from the genre leading games, such as; pushing your people from prehistoric man to success through the ages, reminiscent of Age of Empires, and the survival, village building and resource management that is found in Settlers. Gamers who enjoy those titles will certainly feel at home with this game.

What makes DOM stand out for me is the varied ways in which your people can lose their life. A focus on the survival element of the game rather than just the vast and beautiful empire that you create, gives the game a refreshing edge to a rather busy genre. You are always one move away from disaster, but luckily that doesn’t have to mean the end.

Like with all games every positive has to have a negative, one which has been mentioned is the clunky UI. The other is both a blessing and a curse. The slow paced nature at the beginning will allow you to get used to the game play in a comfortable manner, but this pace is always there even when you start a new map. What was once a convenience now turns into a slow and infuriating time sink which makes the early stages feel arduous, even boring. Unfortunately, this I feel will put a number of players off, especially those that want their action to happen yesterday.

I experienced some spectacular and enjoyable moments, from designing and building my village, to the exhilaration of hunting your first giant beast. As time goes on the environment changes, the vast world no longer fills you with the fear of the daunting beasts as extinction yet again takes its toll on their existence. The fear that you face is the untimely raids upon your village, an almost tiresome affair which does help to keep you alert. A game where you must achieve milestones before you move to the next scenario, and a hardcore mode if you want to increase the challenge in front of you. This game has plenty to make you want to come back for more, and with enough of a unique twist on the usual RTS game play to make it stand out against its peers.

Take control of a settlement of prehistoric man. Guide them through the ages to help them to survive the struggle.

Clunky User Interface.
Opening Era can be slow for experienced players.
Resource management system can be tough to balance.