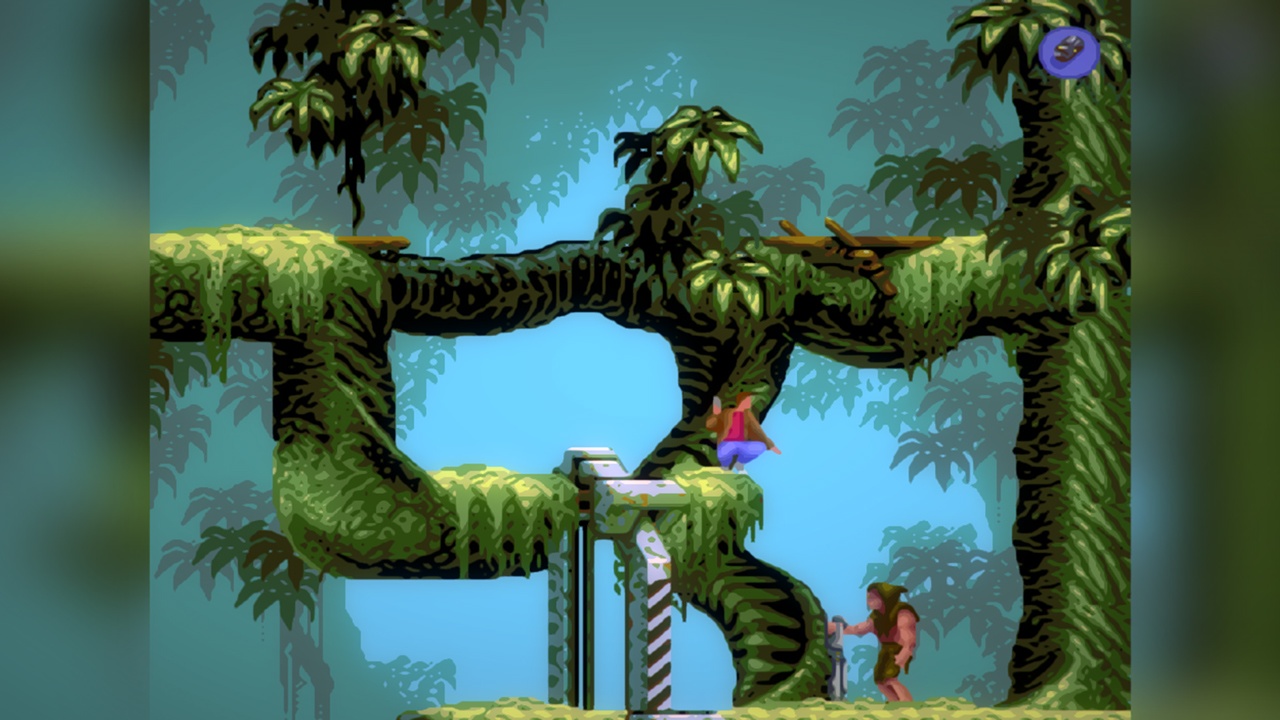 Quick, how many times have you bought the same movie again? There’s probably a few of you out there that, through the years, have owned the same movie in multiple formats. Starting with an awesome BETAMAX copy, moving on to Laserdisc and then HDDVD, you can’t figure out why you keep betting on the wrong format but you’re still glad that you got to own the movie again. Seriously, I have purchased Blade Runner no fewer than four times, and I’m always happy that I own it on a contemporary machine. After all, it’s a timeless story, and I can’t be bothered to always dust off my DVD player just to look at my dope four disc set with the tiny unicorn. The same certainly holds true for certain games and, in the case of Flashback, this classic tale from the early 90s still holds up as a fantastic adventure, even on your brand new Switch.

Flashback is the story of Conrad, your run-of-the-mill amnesiac hero of the 22nd century who starts the game running from the police (why?) and crash landing on Titan (how?) before being told my himself via holocube to go find his friend Ian (who?). The whole game is filled with questions that, thankfully, are quickly answered, but nevertheless leave the player with a lot of yearning to get some clarity on what is going on. Far from being a mess of a game, Flashback has this amazing pacing to it that allows you to be beset by curiosity but never overwhelmed or supersaturated in it. Instead, Flashback plays out in a manner that feels like a great science fiction film from the early 90s. There’s enough of a ridiculous element to what is going on in the future that it requires a bit of suspended disbelief, but not enough that it’s too far fetched. There’s a cool “future” aesthetic to everything from Conrad’s laser pistol to the Death Tower game show that Conrad must participate in to win a ticket back to Earth. There’s this idea of networked intergalactic travel that’s just on the tips of everyone’s tongues, even today, and it makes for a perfect backdrop to this short-lived story of amnesia. 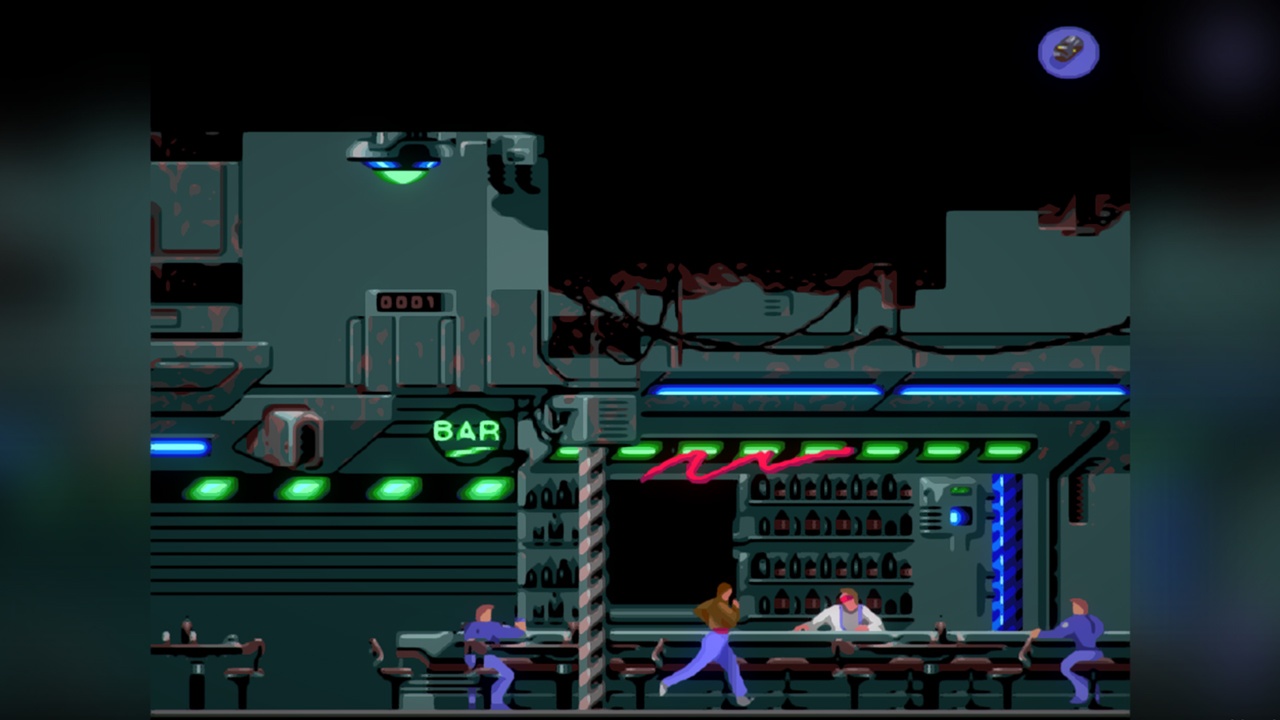 Flashback plays out in a 2D, sidescrolling sort of adventure that is particularly hard to describe without giving examples that immediately clue you in. Most recently, a modern take on the genre would be The Way, but even that doesn’t quite capture the feeling of the era. A better take would be Out of this World, or, more specifically, the first Prince of Persia. Conrad runs back and forth on a series of platforms that handily exist regardless of where you are (deep jungle, murder gameshow, alien headquarters) and you’re required to jump, hang, crouch and roll in order to survive both traps and opponents alike. Conrad has a very limited amount of life, and can easily die if you miss a jump and fall too far: a trademark of games at this time. It was meant to bring a sense of realism to the generation who had Super Jumpman and the like (yes, bring realism to a game about a dude who travels between worlds). Conrad has the ability to throw up shields and wields unlimited ammunition, but action would be the last word I’d use to describe this game. Instead, it’s equal amounts adventure, puzzle solving and storytelling, which is the real core of Flashback. Additionally, the game is horribly unforgiving, mostly due in part to the whole adventure being finished in two hours or so. Newcomers may want to take a look at the Remastered version before anything else, but we’ll get to that in a moment.

As a historic experience of gaming and vision, Flashback is enjoyable in the way that watching films from the 30s and 40s can be. You have to basically allocate a certain level of “give” in your mind to best understand and fully appreciate the way things act and present. You may feel that Conrad is extremely slow and clunky in his running, or that the puzzles are more frustrating simply because he’s less than accurate with his jumps. You’ll actively get angry that you missed a platform and fell to your death in spite of some arguable pixel density. Remember, this is the game that the original director said was best played on the Sega Mega Drive, a console that many may not be aware of because it was overshadowed by the Genesis (EDIT: I made a huge mistake, I mixed up the Mega Drive with the Master System[and Flashback was never on the Master System]. The Mega Drive and the Genesis are the same thing. Nothing was overshadowed, North America just needed a different name. Thanks to an eagle eyed reader who caught my mixup!). When you go out of your way to make a retro game and capture the flaws in it, that usually makes for a more obnoxious appearance and abject snide tonality. When it’s a legitimately classic game, these shortcomings can be excused because, well, this is something like the 14th iteration of Flashback. Very few games have had releases on both the Amiga and the Sega Dreamcast, so there is definitely an arguable leeway in how the game presents. I personally find it endearing: the animation isn’t choppy or broken, and there’s nothing that happens that shouldn’t happen. It’s had time to be perfected. 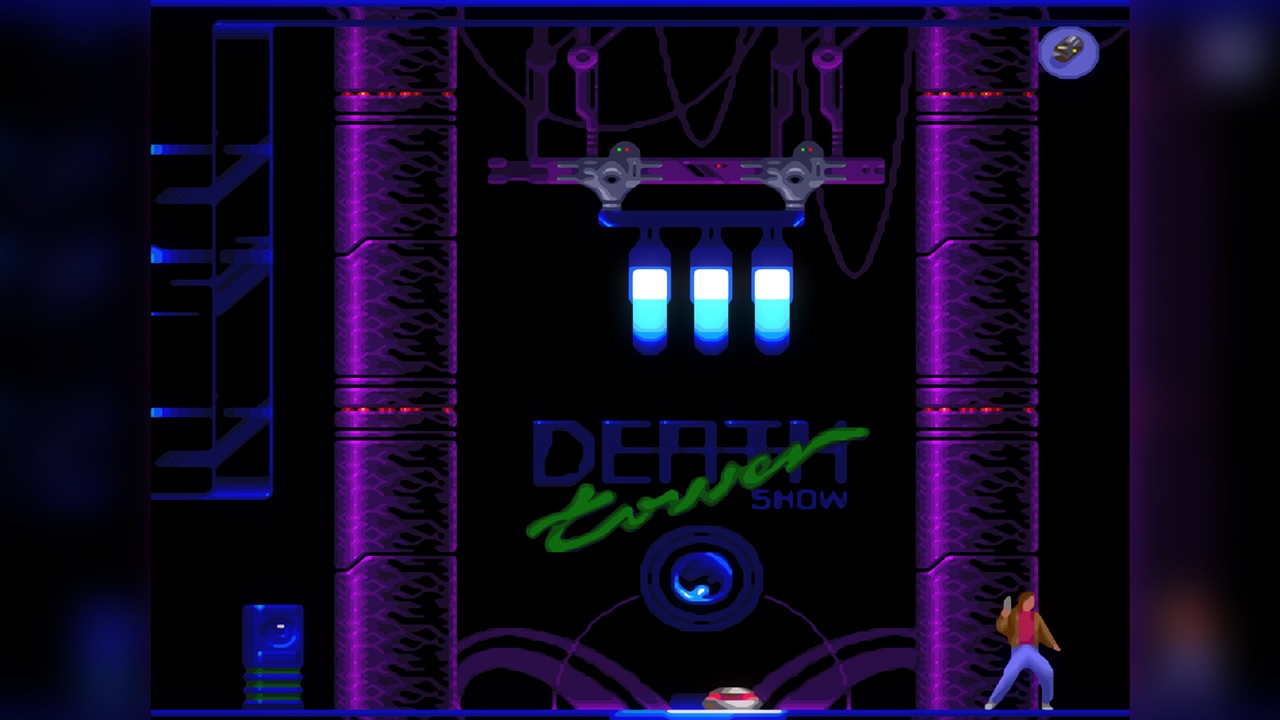 Now, if you really want things to be just a bit better in terms of what modern gaming can provide, I highly recommend new and veteran players alike give the Remastered mode of Flashback a try. Besides some color balancing and updated graphics (not too upgraded, this isn’t a total remake), there’s some additional features that come baked in. Tutorial screens are available at any time to remind you and clue you in to Conrad’s full range of motion and options. The audio has been seriously remastered to give a grander scope and ambience to the game’s impressive soundtrack. And, most importantly, the Rewind feature has been added, which gives some much needed relief to this borderline vengeful game. By choosing a certain level of difficulty, players are able to take back moves or decisions instantly, either with an unlimited degree or with a cooldown timer. Additionally, you can put the game on “Hard” to remove any Rewind capabilities and simply enjoy the challenge of the original intent with some updated presentation. In all honestly, the Rewinds are almost novel and allow for some experimentation: nothing quite like testing how far you can throw yourself in order to die.

Flashback has aged wonderfully in the twenty five plus years since its release, and I should hope it continues to maintain that glamor and charm that it first exhibited on the Amiga so very long ago. In comparison to some other older games, Flashback has a lot of earnest challenge and plot, something that keeps it relevant and deserving of accolades after all this time. Retro enthusiasts will have already bought this to have a far-superior mobile version than the hamstrung iOS port. The curious should definitely hop on the wagon now and give Flashback a ride: there’s no shame in Rewinding your mistakes, and I won’t tell the others.