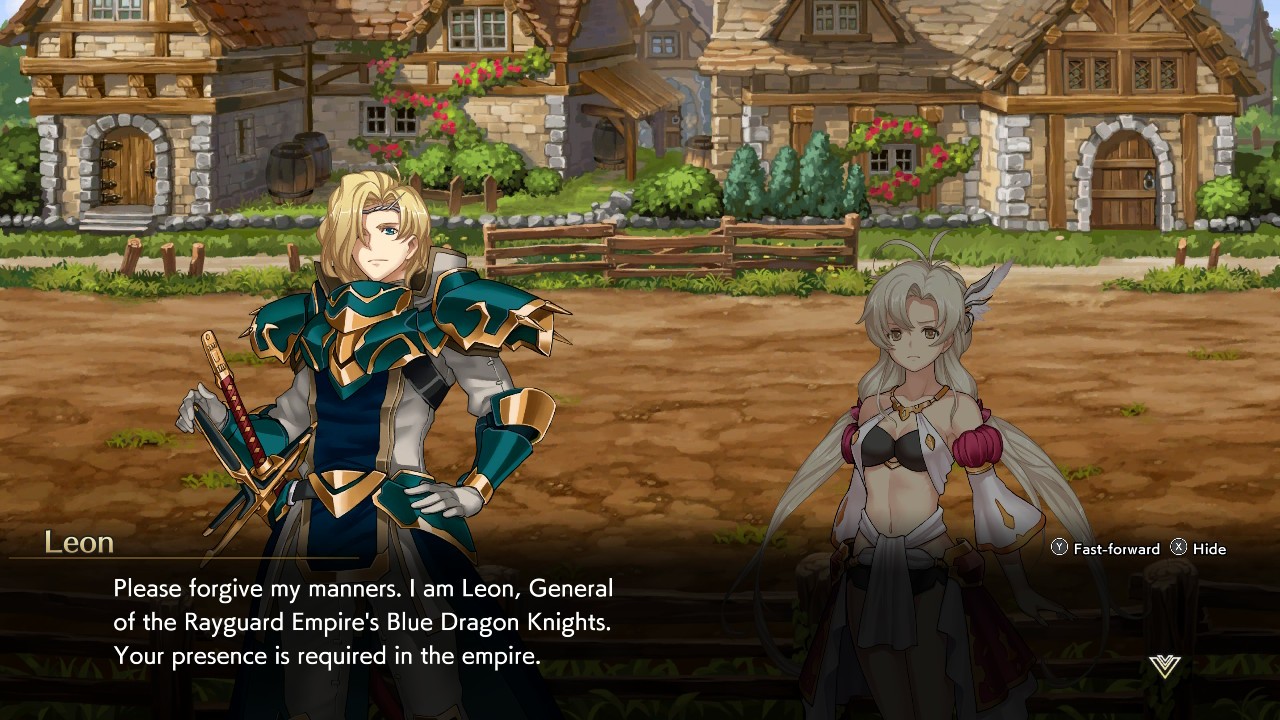 If you’re from a younger gaming generation like me and missed the opportunity to play games from years past (I wasn’t old enough to walk, much less play a video game when Langrisser originally released in 1991/1994), remastered versions are the perfect way to get a second chance. Not all classics hold up to the test of time, however, sometimes containing a host of dated concepts and bad design decisions in an effort to remain true to the original. Purists will say that’s how a game was meant to be played, but I argue that if you have the means to make improvements–why wouldn’t you?

So, obviously, I knew nothing of Langrisser before starting and, if I was to compare it to a modern day title, I’d say it plays like a larger scale Fire Emblem. Tactical, turn-based combat on a grid is at the heart of both games, but where Fire Emblem has you controlling single units, Langrisser divides your fighting force into commanders and mercenaries. A commander can employ a set number of mercenaries, the amount of which can increase as you gain experience and change job classes (more on that later), and those are the units you’ll have for the duration of the match. The enemy will always outnumber you, so careful consideration is key before entering the fray.

There’s a few different types of units to choose from– the selection of which depends on your commander and their own class. Each has their own strengths and weaknesses–for example, mounted units have higher mobility–and that in and off itself opens up a realm of tactical possibilities… Except you’re not able to mix and match mercenaries under a single commander’s control. Your team must consist of all the same units– a design decision that floored me. That meant that if I wanted to have a ranged unit, I would only be able to hire ranged units with my limited unit capacity. If I wanted to defend those squishy units, I would have to hire a team of beefy mercenaries under the command of a different commander. While this isn’t game breaking, it does seem like a weird and arbitrary restriction. You can take direct control of your units or, if you happen to have a large group and just want to quickly make decisions, you can have your commander give an order, after which any units under their influence will act accordingly. Tell them to “charge,” for example, and they’ll move to the full extent of their range. I thought that was pretty neat, especially when I had some ground to cover or just a few enemies left and didn’t feel like going through the motions of plotting everyone’s turns. 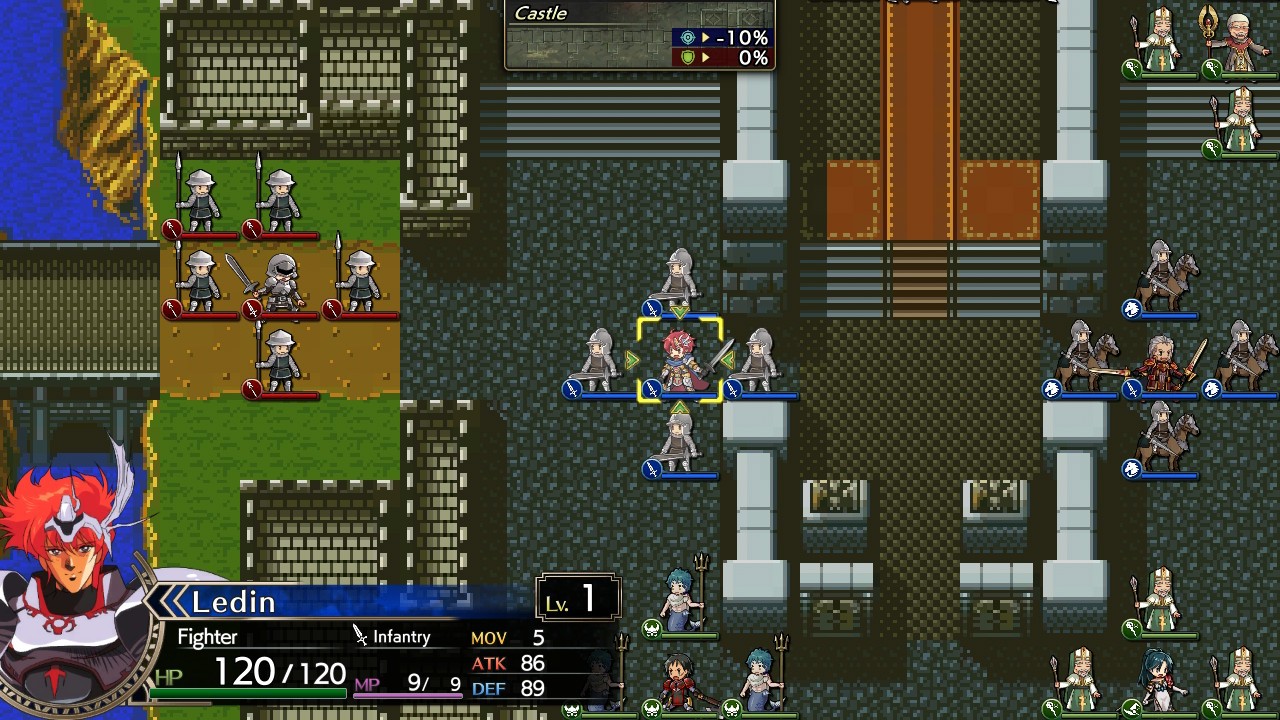 When you attack an enemy (or are in turn attacked), the strength of your units as well as enemy stats comes into play. They face off against each other in an Advanced Wars-esque rush of units and deal damage to each other. If a unit’s number reaches zero, it is destroyed. If not, you’re able to mount another assault using a different mercenary group and try to destroy them. Taking on every enemy isn’t a great use of your limited numbers, though–which is when the commander distinction comes into play. Commander units are stronger than the average mercenary, but if you fell one all of their units, no matter how much health they have remaining, fall as well. This is a double edged sword, of course, because you can lose a powerful bunch of allies in a single blow if you aren’t careful. This is especially true of the AI, which can vary in intelligence at times and get itself in often fatal situations.

Actions on the battlefield gain experience for your commanders and they can level up. Levelling up and striking the final blow on enemies nets you CP, which are used to change job classes. Job classes, in turn, give your commanders access to new skills and unit types. Being a fan of Final Fantasy Tactics and the like, I was a huge fan of this system. Job classes work in tiers, meaning you have to change to the prerequisite class before going to the next tier up, but you can also retroactively unlock a new class and benefit from learning new abilities without having to lose the status boost gained from progressing in rank. The system is well balanced and it made me invest more time in striking the final blow with characters I was trying to unlock new classes.

As far as story goes, I didn’t find Langrisser I & II to be particularly strong. You’re dropped into the game without any explanation and expected to figure it out from there. Any subsequent story is told via short exchanges on the field of battle. After combat, you’re brought to what looks like an overworld, but there’s really no reason for it as you never get to select a location to which you’ll proceed, nor is there much reason to purchase new equipment.

There are branching story lines, which gives some form of replayability; however, since they only split towards the very end of the game, there’s nothing stopping you from just saving before the point of no return and making a different decision. 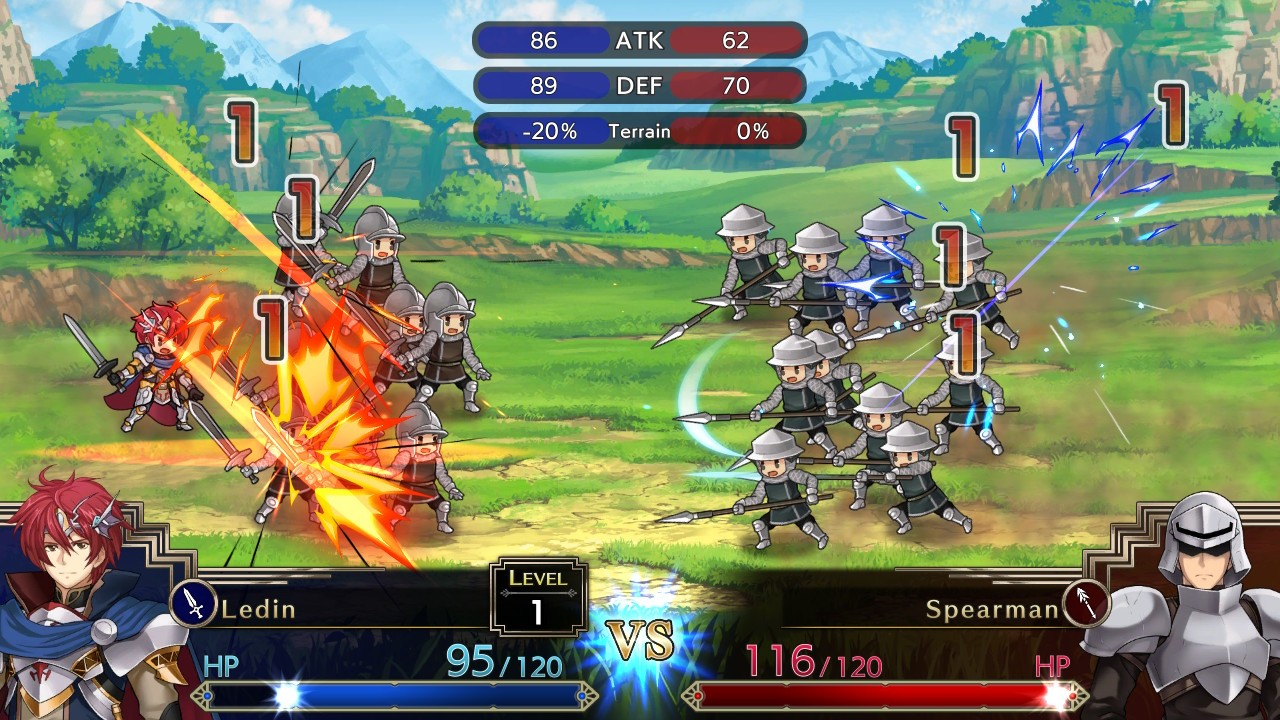 Langrisser I & II gives you the option of playing with the original appearance or the updated version with the latter being the default setting. I will say, there’s a stark contrast between the two, so it’s worth playing in classic at least once.

If you prefer one look over the other, you can even pick and choose the art style you’d rather see for the characters and battle field. So if you like the classic look of the battlefield, but not so much the classic look of the characters there’s a setting for that. Similarly, you can play with the original audio or the revamped one. I didn’t notice as big a difference in this aspect; both sound pretty good.

When compared to modern strategic RPGs, Langrisser I & II doesn’t stand out. Fans of the original may delight in seeing a classic refreshed and presented to a wider audience, but I’m not sure the younger crowd will get as much enjoyment out of it. Still, if you’re looking for a strategy RPG that’ll give you your money’s worth in terms of content then Langrisser I & II is a safe bet.

Does this remastered version of games almost two decades old hold up?