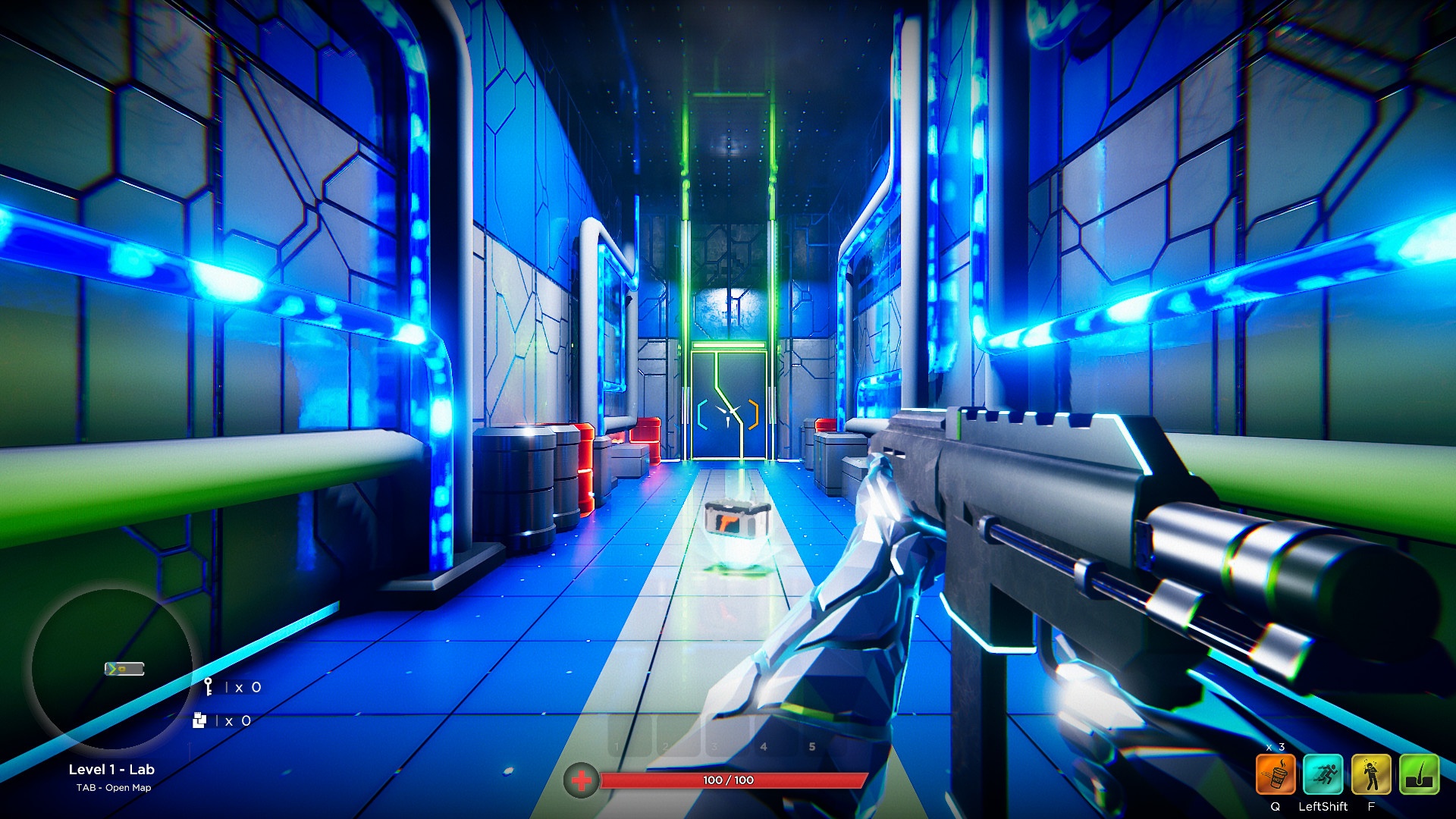 HYPERGUN is the newest title from NVYVE Studios, the same developer that’s behind the survival game P.A.M.E.L.A. that has been in Steam’s Early Access for about a year. Now, this might prompt some people to jump to conclusions as to why they are releasing a new game while they’re still developing another one, and the developers have already addressed this here So, in case you were wondering about that, I’d suggest you give that a read. In any case, we shall now see what HYPERGUN is all about.

The game wastes no time in its presentation, as you’re immediately thrown into this hub-like area inside DevTech Labs, more precisely, in the HYPERGUN Facility. If you spend a few minutes searching around this area, you’ll find emails and notes that point out what is really going on in this world. Long story short, Humanity is under threat by some alien oppressors, and your company has been trying to run a simulation in order to find the HYPERGUN, the best weapon that you can come up with in order to fend off the impending threat and avoid extinction. However, the test subjects that have entered the simulation up until this point have not been successful, so, with some help, the intern, YOU, manage to sneak into the facility and give it a shot.

The game is pretty straightforward, and everything just sort of clicks as soon as you start playing. If you have played games like Ziggurat, Immortal Redneck, Paranautical Activity, or other titles within the FPS roguelite genre, the gameplay systems in HYPERGUN will immediately make sense to you. The game at its core is a first-person shooter, but it features a permanent progression mechanic, randomly generated levels, and random loot drops. 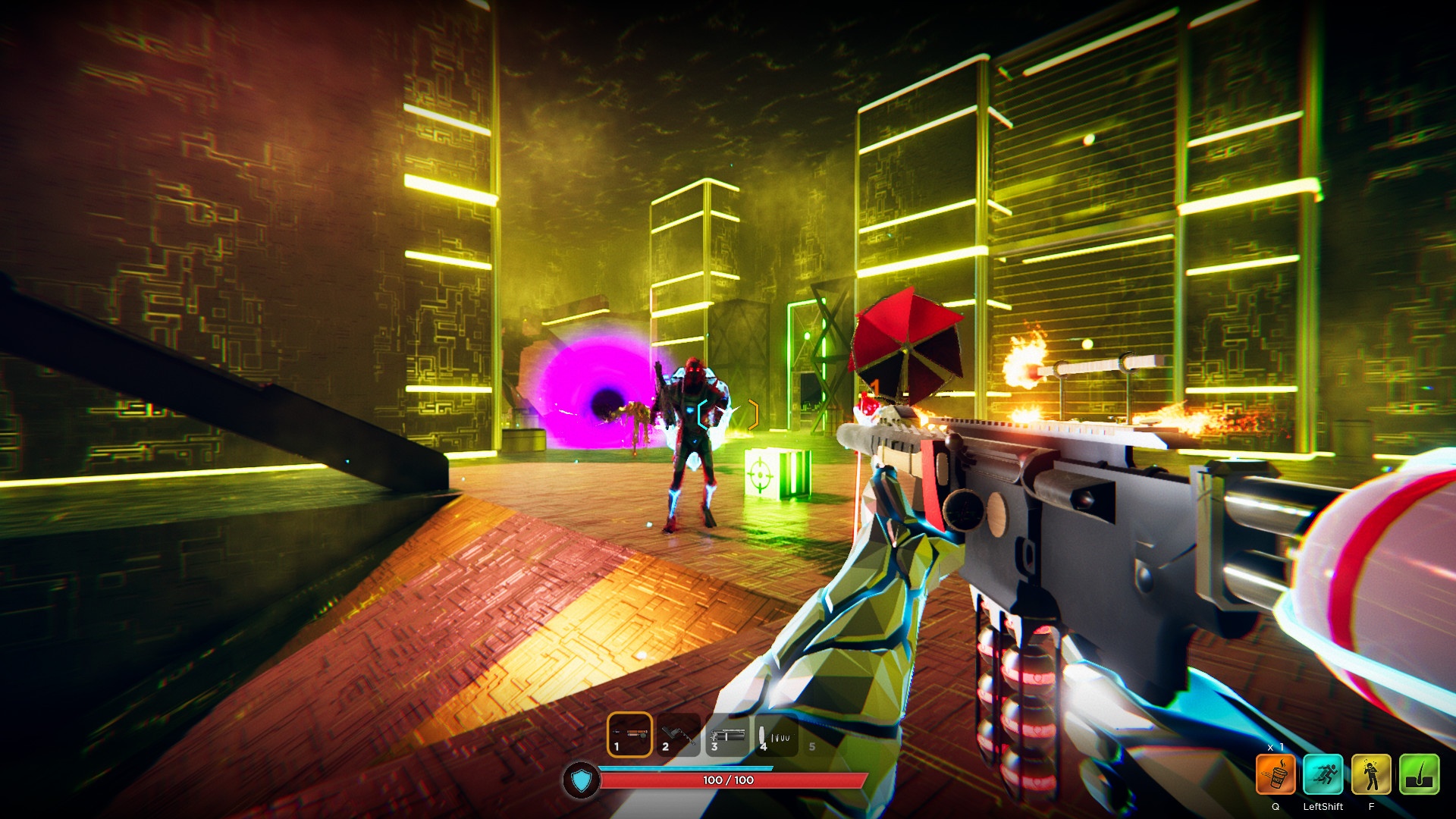 The Preview build that I’ve played only features one level, which can be beaten easily in under an hour, but the final game should have at least six levels. With that said, each level is composed of several randomly generated rooms. Some of the level design reminds me a little bit of Paranautical Activity. Essentially, while the different rooms tend to have a different layout, they still can be categorized into two types of rooms. The first ones being wide open rooms, with a few platforms and ramps that allow you to outmaneuver enemies in some ways. The other type is essentially more tight rooms, usually with some sort of funnel shape, resembling something like a hallway with more wide areas at each end of the room. There are also challenge rooms, which puts you against a series of enemies and rewards you with items if you manage to survive the challenge.

So far, from what I’ve seen in the Preview build, there are enough enemy types to keep things interesting throughout the first level, and while the boss did come out as a great surprise in the way that it was designed, I’m curious to see how the game holds up in the rest of the zones in the full game. As of right now, you face a random assortment of enemies, ranging from swarms of little spiders, drones, snipers that deploy shields in order to protect themselves, huge dual-wielding shield enemies, and the most basic ones, which only have melee attacks and so they just chase you all the time.

Now, while it makes sense given the game’s plot, I’m not really a fan of the fact that there is only one weapon per class, and these are still pretty basic, as you are limited to an SMG on the Intern, the first playable character, and to a rifle, a shotgun, and a sniper rifle, on the other three classes that should be unlockable on the full game. Nonetheless, throughout each run, you will be able to pick up all sorts of different attachments that will instantly get added to your weapon and change the way it handles. From simple changes to the total amount of damage that you deal with it, to changes to its fire rate, to even adding a secondary fire mode like firing buzzsaws or harpoons. While it is certainly a decent system that provides players with the possibility to upgrade their weapon, and even though the attachments change the way the weapon looks, the upgrades are very hard to get noticed and are just underwhelming, simply due to the fact that they are just stat increases for the most part.

I am personally not a fan of games where weapons don’t have any, or barely any, recoil, so that is, for me, is the thing that I least like about HYPERGUN. Firing your weapon also does not require any ammo, but they do consume energy, which regenerates a few seconds after you stop firing the gun. Like any good first-person shooter, HYPERGUN rewards headshots thanks to dealing increased damage, which certainly makes me feel that all the years that I’ve spent playing shooters have not gone to waste. 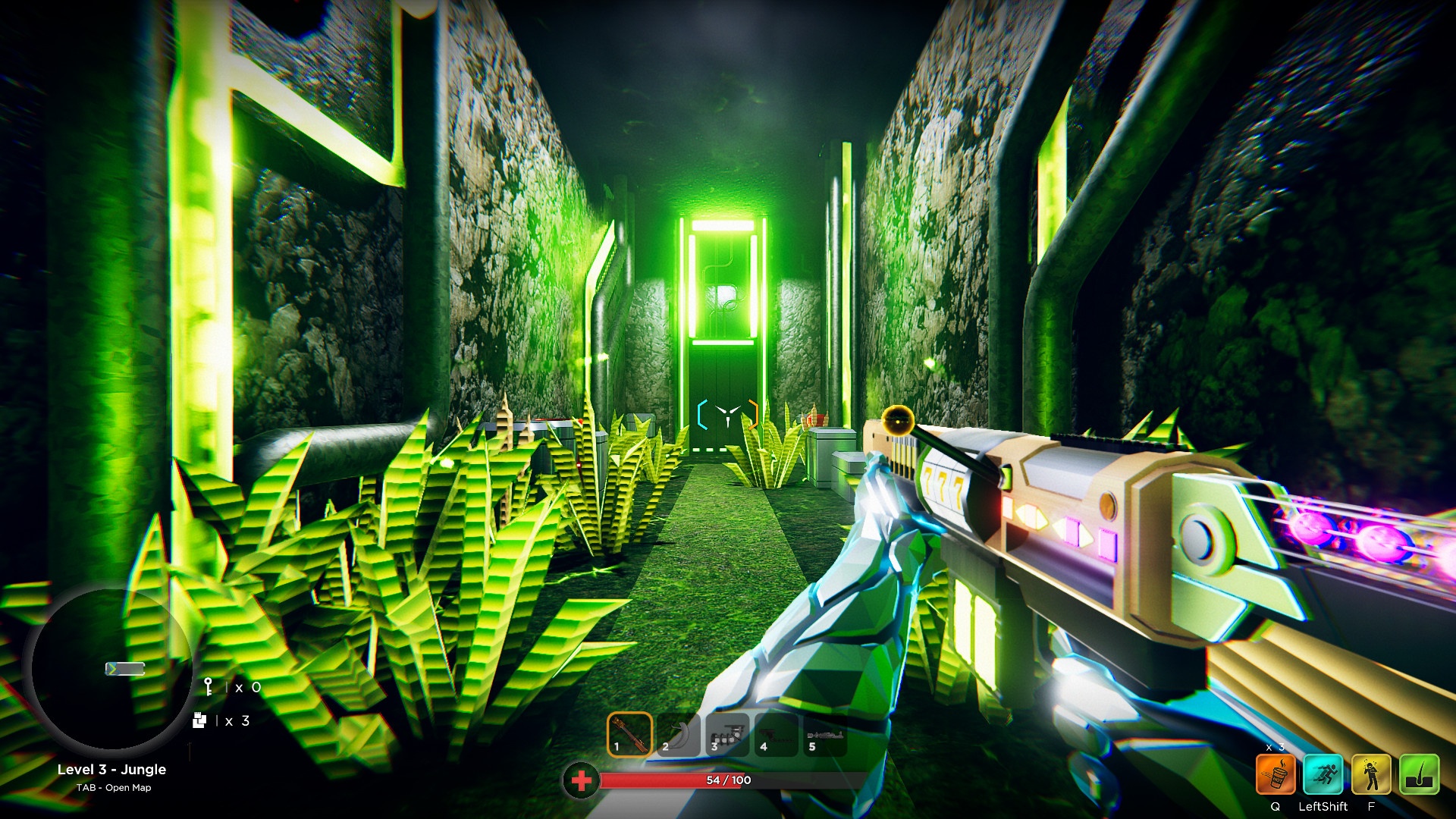 As you play the game, you will find Hypercoins, which are the game’s currency that is used for buying things back at the hub, outside of the simulation. On a single run, I was only able to find 3 of them, and if I recall correctly, the cheapest thing that you can buy costs 10 of those, so there might be some degree of grind if you want to unlock everything in the game. Obviously, as I’ve mentioned previously, this is only based on one level of the game and I’m not really sure how the other five levels work; if they are played consecutively, or if you exit the simulation once you clear each level. In any case, these coins can be used to unlock attachments that can then spawn during your playthroughs, but you can also use them to unlock more abilities for your classes. The fact that there is permanent progression in a game like this, is already one reason for me to like it, as there is some incentive for me to keep playing.

I’m pretty sure it’s obvious to everyone that this game looks quite nice, just like the studio’s other game P.A.M.E.L.A. Sure the texture work might be pretty bland, but given the context of the game, it makes sense, and the lighting and the work on the reflections and particle effects certainly make up for it. The only thing that doesn’t seem quite right to me is the quality of enemy animations, which feels a bit stiff sometimes. Likewise, mostly due to it having no recoil, whenever you fire your gun, it feels and looks as if it doesn’t have any impact, which is kind of disappointing to see in a first-person shooter.

The game features a pretty wide range of graphical options, which is pretty neat if you want to find a nice compromise between eye candy and performance, but my favourite thing about the game in this aspect is the fact that you can completely change the render style to make the game look more retro, pixely, or painterly. This is pretty much just for the sake of novelty, but I still find it to be a nice little touch that adds some charm to the game if you choose to enable it.

Overall, while I’m not a fan of the way that the shooting handles, the game’s setting and its progression system are certainly making me crave for more HYPERGUN. On top of that, I’m really curious to see what the rest of the game brings in terms of diversity, and I honestly can’t wait to have more of that amazing soundtrack blasting through my ears. If the idea of a first-person shooter roguelite with permanent progression, randomly generated levels, dozens of weapon attachments, a slick look, and a groovy electronic soundtrack sounds like something that you’d enjoy, then you should keep an eye out on HYPERGUN when it releases on the 23rd of August.