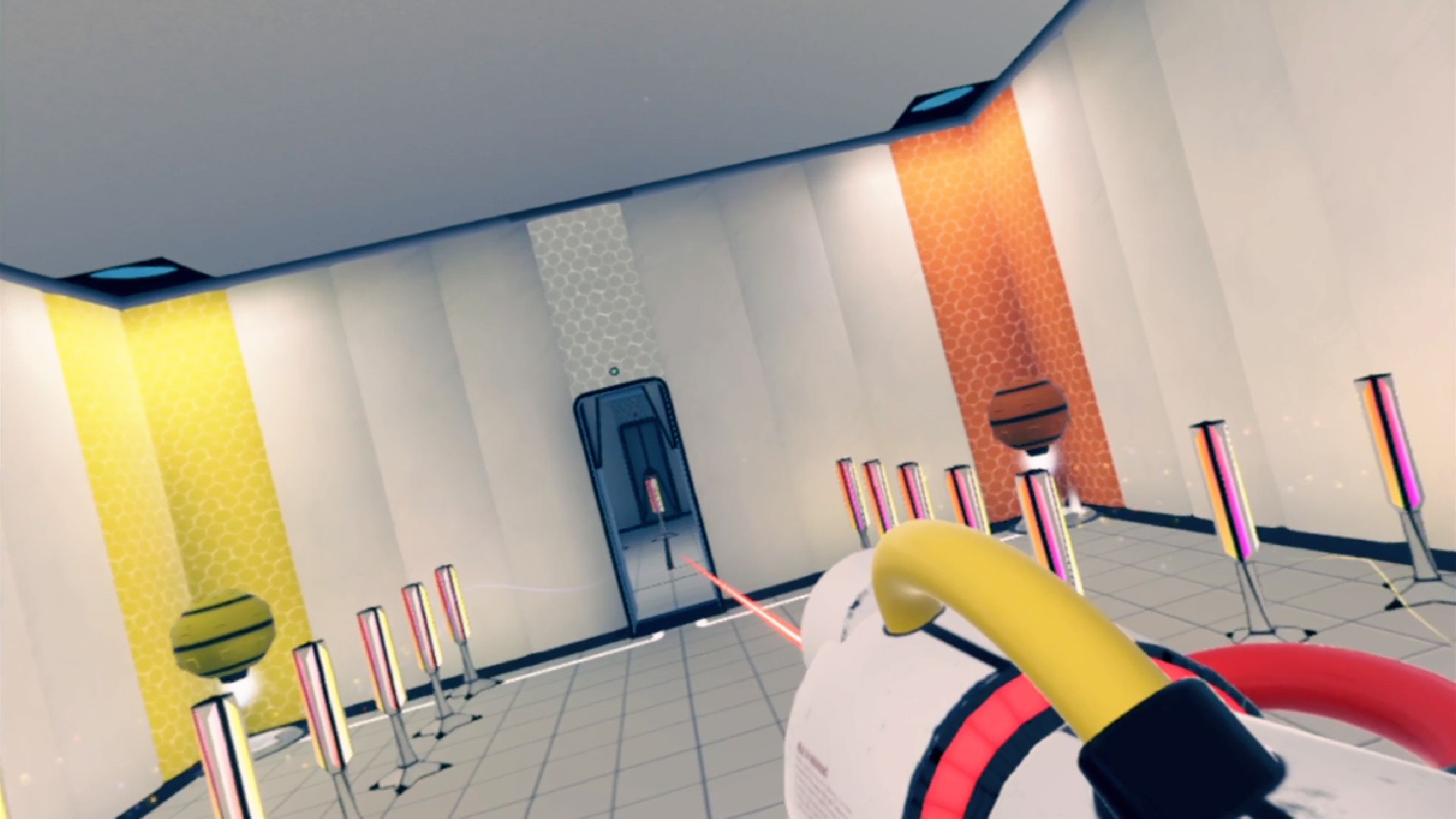 For anyone who’s ever tried their hand at Portal or Esper, the premise behind ChromaGun VR will be instantly familiar; you’re a test subject overseen by a disembodied and often sarcastic voice and it’s your task to solve a series of puzzles in order to progress from room to room.  Simple right?  Indie developers Pixel Maniacs (those of Escape The Loop fame) have mixed things up a little by using colours as their platform and a paint gun as your weapon of choice.

During the early stages of ChromaGun VR, you’re introduced to the ChromaGun, a gun that fires paint. All of the rooms in ChromaGun VR are populated by worker droids that can either aid or hamper your progress. Initially you’ll be faced with painting walls and droids the same colour in order to activate exit doors. Gradually, you’ll be introduced to ‘triggers’ or pressure pads that have to be held down in order to open an exit door. Here you’ll be moving droids onto the pads by painting them the right colour to match a nearby wall. As ChromaGun  progresses, the difficulty level cranks up fairly quickly and you’ll find yourself having to mix colours (and remembering which colours to mix together) in order to move forward. Remember those lessons in primary colours that we were taught in junior school? No, me neither. ChromaGun VR will make you wish you’d taken notes.

When the game starts, you’ll be using just yellow to get from room to room. After a short while you’ll also have blue and red to manipulate. As well as mixing colours, some levels will present you with hazards such as electric floors, fire and black outs that will require you use a torch as you try to work out which colour you’re going to need in order to escape the room. Oh, and if that wasn’t enough to keep you on the edge of your seat, some of the droids will chase you if you paint them with the wrong colour and, if they catch you, it’s game over. 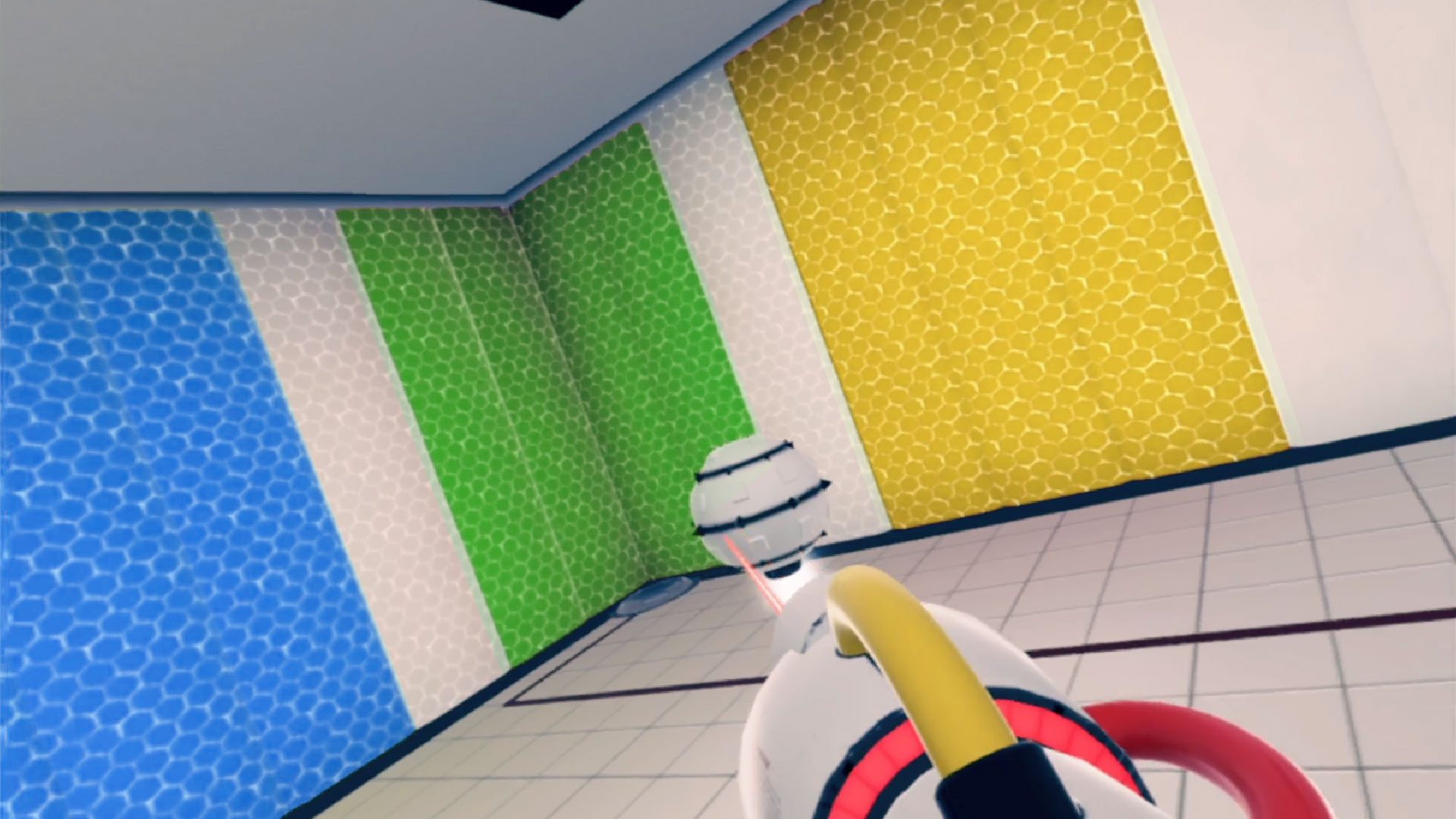 The puzzles in ChromaGun are a mixed bag of being ‘oh so easy,’ to challenges that will take you a dozen attempts to crack them. There’s very little in between. That being said, you never get the feeling that the puzzles are impossible and you should quit the game. However, matters aren’t helped much by your invisible supervisor who offers occasional sarcastic quips and cryptic jokes that may go over the heads of younger players. For example, if someone said to you, ‘those are not the droids you’re looking for,’ would you know which film I was referencing? Ok, I knew you would because you’re super smart. But it’s pretty hit or miss nonetheless.

Graphically, ChromaGun uses a palette of bright, bold colours in each of the rooms. The rooms themselves are pretty spartan and, apart from the droids and the hazards, there’s not much eye candy on offer.

Audio-wise, ChromaGun  VR offers slightly sci-fi’ish background music (sci-fi’ish?  That’s definitely not a word – Ed) that suitably accompanies the futuristic environment. The gun itself sounds like an exaggerated paint ball gun which, I guess, makes sense given the fact that that’s what it is. The voice acting from your hidden supervisor is pretty well delivered, but lacks some of the heart and soul that made Esper so memorable. And, as I mentioned earlier, some of the jokes may fall flat occasionally. 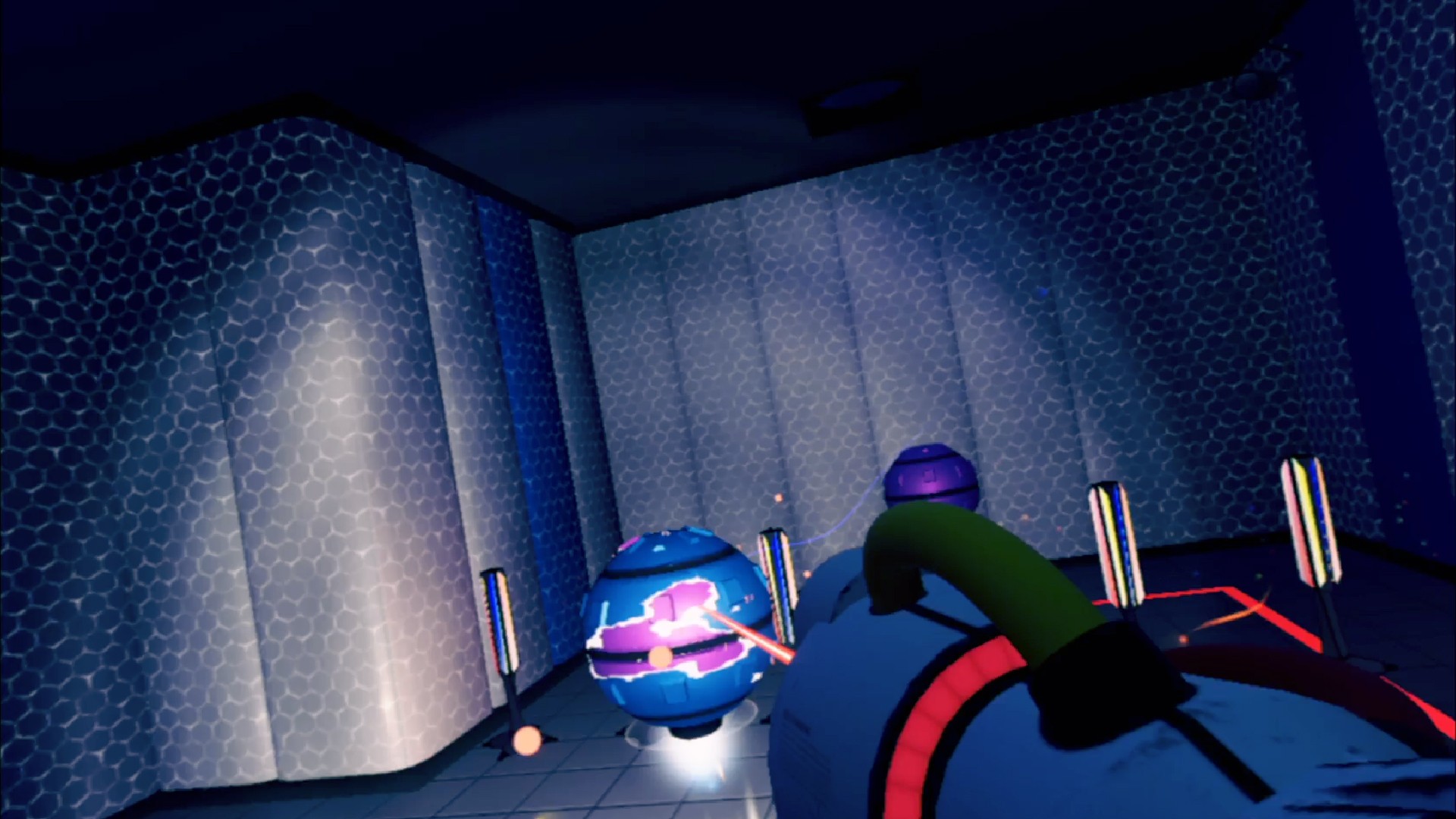 However, the jewel in ChromaGun VR’s crown has to be the puzzles themselves.  I have to admit that I haven’t had so much fun mixing colours since I was a kid. The move controller isn’t an essential part of the game, but using it makes ChromaGun feel like you’re actually wielding an oversized paint ball gun – a feeling that never gets old. Oh and while we’re on the topic of immersion, adding an extra element of hostile droids was an act of sheer genius.  Trying to solve a room puzzle while you’re being chased by killer floating droids has to be experienced at least once by every gamer.

On a side note, a word to the wise: before you jump into the main game you’ll have to tweak the movement settings to a comfort level that suits you. Once done, the ever present danger of motion sickness will have been taken care of. A lesson I learnt the hard way. Enough said.

Depending on how good you are at solving puzzles, ChromaGun VR will take you some 6 to 7 hours to complete. With tonnes of variety in puzzles and hazards and the added element of hostile droids, ChromaGun is a challenging, rewarding and immersive VR experience. Well worth your time and money.

With tonnes of variety in puzzles and hazards and the added element of hostile droids, ChromaGun is a challenging, rewarding and immersive VR experience.  Well worth your time and money.