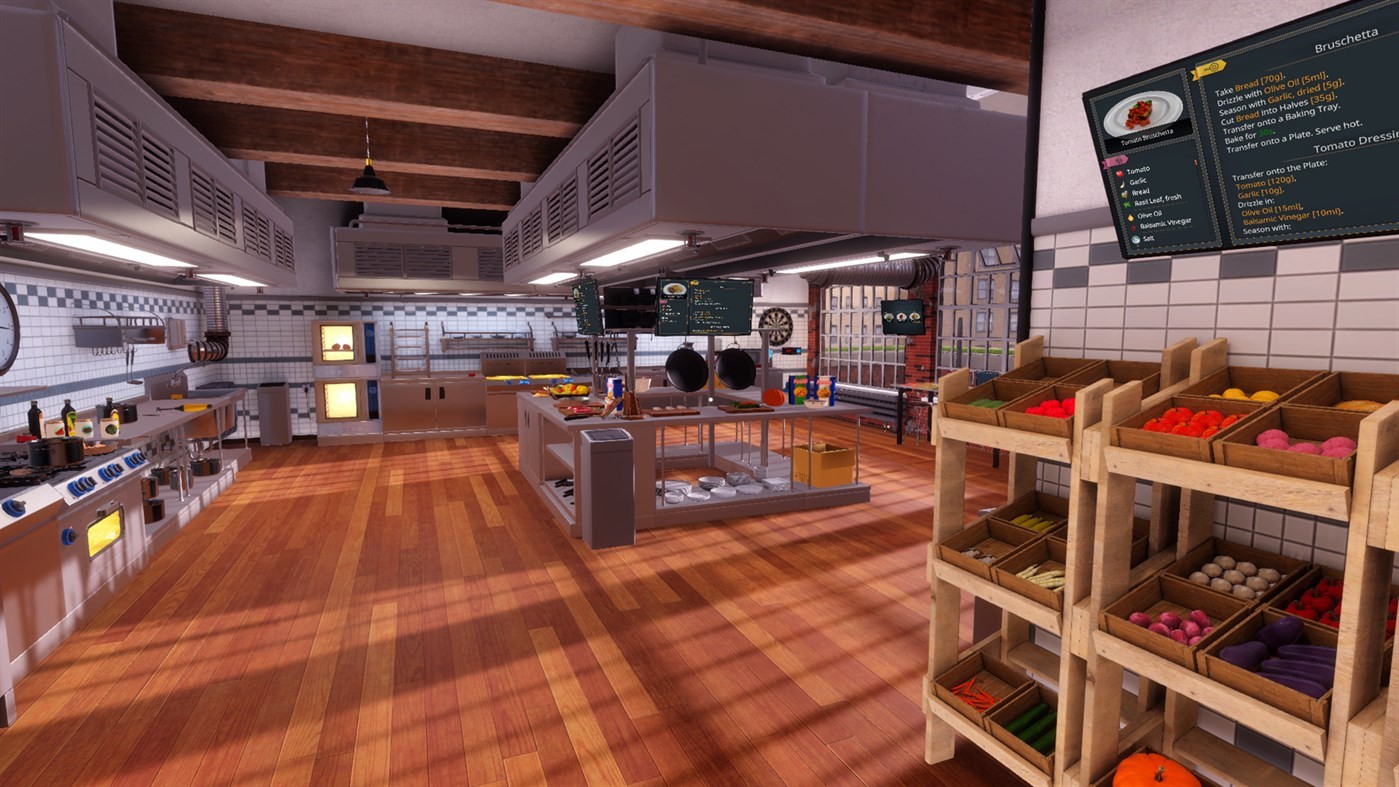 If you have read some of my previous reviews, you’ll know I’m quite partial to playing simulator games. The difference with this one is it’s something I am not very good at in real-life situations, and that’s cooking. I’ve always liked the idea of cooking but the truth is my partner is exceptional at it and yes, I should try harder to put some effort in. But I’m skilful at loading and turning the dishwasher on afterwards.

Cooking Simulator I was hoping may give me some inspiration to get the pinny on and start smashing out some complex meals. Developed by Big Cheese Studios and published by Playway, I was genuinely intrigued to play something a little different. I’m a fan of the Overcooked titles so my senses were hoping it was a little like that but much more in-depth and not so frustrating.

Cooking Simulator presents itself as a realistic cooking experience in which you will have complete control over all the aspects involved from mopping the kitchen floor to applying the finishing touches to your dish. There are a total of 80 recipes to work with in conjunction with 140 ingredients, so there is plenty to get cracking on with here. You must get your Gordon Ramsay on though, as you will take control of the kitchen while progressively earning fame and experience levels by serving several dishes to match your orders.

Cooking Simulator will gently introduce you to the basics, firstly your tasks will be fixing and cleaning equipment, purchasing essential ingredients and kitchenware and researching recipes. You have to be really conscious of your money management as everything you purchase has a set cost, and you’ll want to utilise all your ingredients and equipment in the most cost-effective way. Essentially you’re not only focusing on the running of the kitchen, the cleanliness, the preparation and the cooking, but also the financial outlay and income of the business as well. 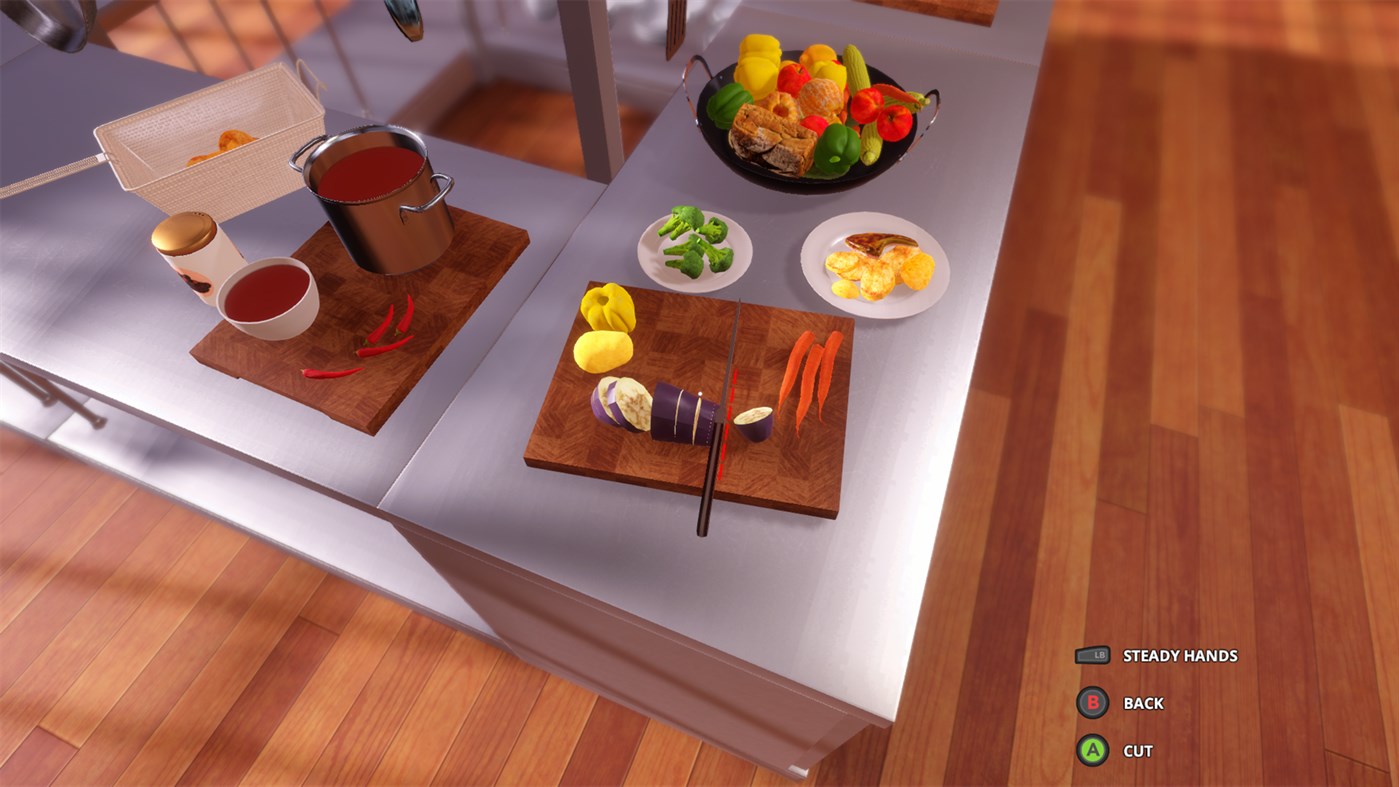 I’d absolutely suggest you follow the tutorial steps to start with or you’ll quickly be in hot water. Be warned when I say the controls are extremely frustrating and you will make mistakes with or without the tutorial. The tutorial is intuitive and gives you some good information to get going. It gives you some basic preparation skills. You’ll then have the choice of what you want to do next, Career Mode, Sandbox Mode, Cooking School and Leaderboard challenges are your options here. I opted for the Career mode for my first selection.

Career mode progressed as I expected really. You start with the bare minimum and build your stature, your experience and your business as you work through each shift. The game is very realistic in the sense that you’ll literally be doing every delicate touch. From the seasoning to the frying, you have to ensure you work on time management as with the fiddly controls it’s very easy to burn something or add too much oil to a hot pan. You can manage the heat on the hobs and even flip your food over, but you must keep your beady eye on the time as your guests will be waiting. 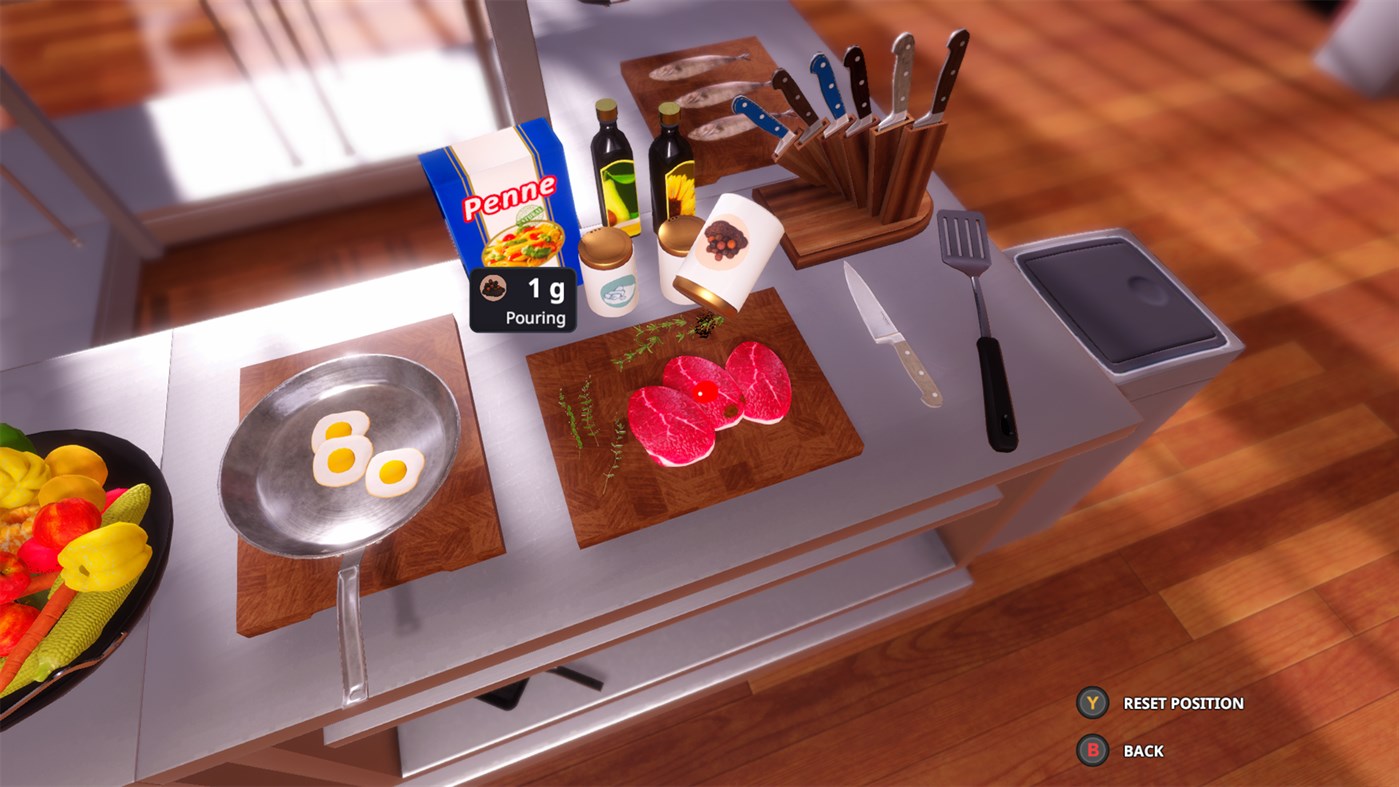 As you progress through the career you’ll be granted more experience, which in turn will level you up. By doing so you’ll be granted skills such as quicker movement, a lower cost of produce and less chance of items breaking when you knock them off the side, which I did constantly. I became quickly frustrated by the poor control system, it felt as if this was a direct port from PC and they hadn’t implemented the controls very well into controller options. I kept telling myself this is totally a mouse and keyboard kind of title. After fluffing the first few meals and not performing very well, I turned my attention to Cooking School which is almost like an extension of the original tutorial. Here you’ll be able to cook at your own free will without the added pressure of timers, and it’s always useful to dip back in here if you’re feeling frustrated.

Abnormally when you require extra ingredients or run out of what you have available, you purchase your extra bits from a cardboard box on the side. I felt the developer could have made more use of the computer you have on the desk at the other side of the kitchen. It doesn’t impact the gameplay really, it’s just a little odd.

Graphically the game does its job and is one of the better-looking simulator titles I’ve seen out there, possibly because you’re within one confined area and not a vast open world. You’ll be able to listen to the radio within the game to give some atmosphere in the kitchen, with a few stations to choose from. It was a nice addition rather than just silence and the clattering of pots and pans.

I found the leaderboard challenges gave the game a sense of real purpose, as this is where your dishes will be put to the real test and your final score pitched against other real players. It gives you a real competitive nature to your gameplay and more often than not I was messing up everything because of not only rushing but the clunky rigid poor control system damaging my flow. I didn’t give the sandbox mode a try, but I imagined it would be an endless free-flowing mode.

The real issue for me was when you were focusing on several recipes at once, and as you progress, the recipes become slightly more complex. It becomes less of a Cooking Simulator type experience and more of a try to put the wrongs you’ve done right kind of vibe. I know I keep going back to the controls but again this is what lets the game down because no matter how hard you try it just never felt smooth and you didn’t feel like you were going to achieve your goal every time you focused on a recipe. You subconsciously feel like you’re slowing down so that you can judge the controls correctly, and it doesn’t help that all the utensils appear to float in mid-air. A pair of animated hands would really help and I know logistically this would be a minefield to program into all the mechanics, but you could judge movement much more thoroughly. Your hand isn’t held after the tutorial or the cooking school, there is no kitchen porter washing your dishes or chopping your veg. You’re left to do it all. It would have been fun if you could potentially hire staff for the kitchen.

Sadly for me Cooking Simulator was an experience best forgotten, the mechanics and the premise are fantastic and I could see real enthusiasts of games in this genre enjoying it. But its control system is very likely the worst I have come across in any game. It makes the gameplay not only extremely infuriating but more difficult than it needs to be. I love a challenge and I don’t mind failing and trying again, but at least get the core control mechanics functional first. Aside from the graphics, the game actually does everything else really satisfactory. There are plenty of recipes and so much to keep the kitchen worker occupied throughout their shift, the preparation, cooking and learning new recipes gives the game some longevity but sadly impatient players will switch off the ovens and maybe find another job instead.

Cooking Simulator has plenty of gameplay to offer but its extremely poor control system with controller is more stressful than enjoyable.