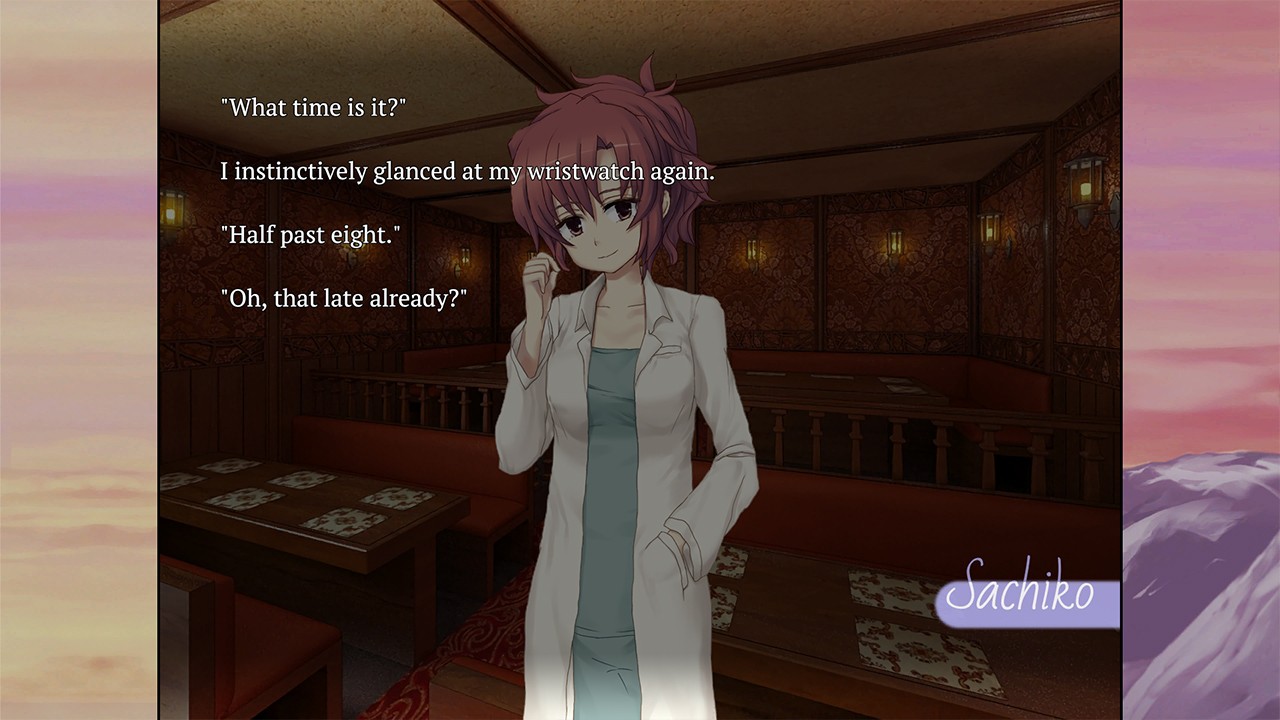 The human mind is a maze that we sometimes get lost inside. We try to remember where we put everything, recall the important stuff, organize as best we can, but you don’t always find things in time. You wander, aimlessly, trying to reach the waypoint that was important when you set out, but somehow forgot along the way. It’s a frightening thing: all we are is what we think, all we know is what’s in our mind, and we can betray our very existence without knowing it or meaning to. But it’s not just our own memories that hang in the balance. If we begin to forget those around us – our friends, our companions, our loved ones – what becomes of them? How strong were the binds that kept them anchored in our hearts and minds? If we begin to lose our grip on them, is there a chance they were never there at all?

Are we just chasing ghosts?

SeaBed is a kinetic visual novel that focuses on three people, but really puts most of the focus on one. Sachiko is a woman who has had a complex relationship with Takako, a girl she met in elementary school, continued to stay connected with through her developmental and early adult life, and then…disappeared. It’s not clear what happened to her, or where she went, and Sachiko is wrought with sadness, anger and confusion. Seeking answers, she connected with Narasaki, a doctor who wants to help Sachiko unravel her own tangled mind and figure out exactly what happened and where things went wrong. Narasaki may also have a more vested interest in Sachiko, but that only makes her more interested in helping her. As the pathways become clearer and Sachiko allows light to shine in the dark corners of her mind, the reader will realize that life, love and your own memories can be more complicated and dire than you’d ever imagine. 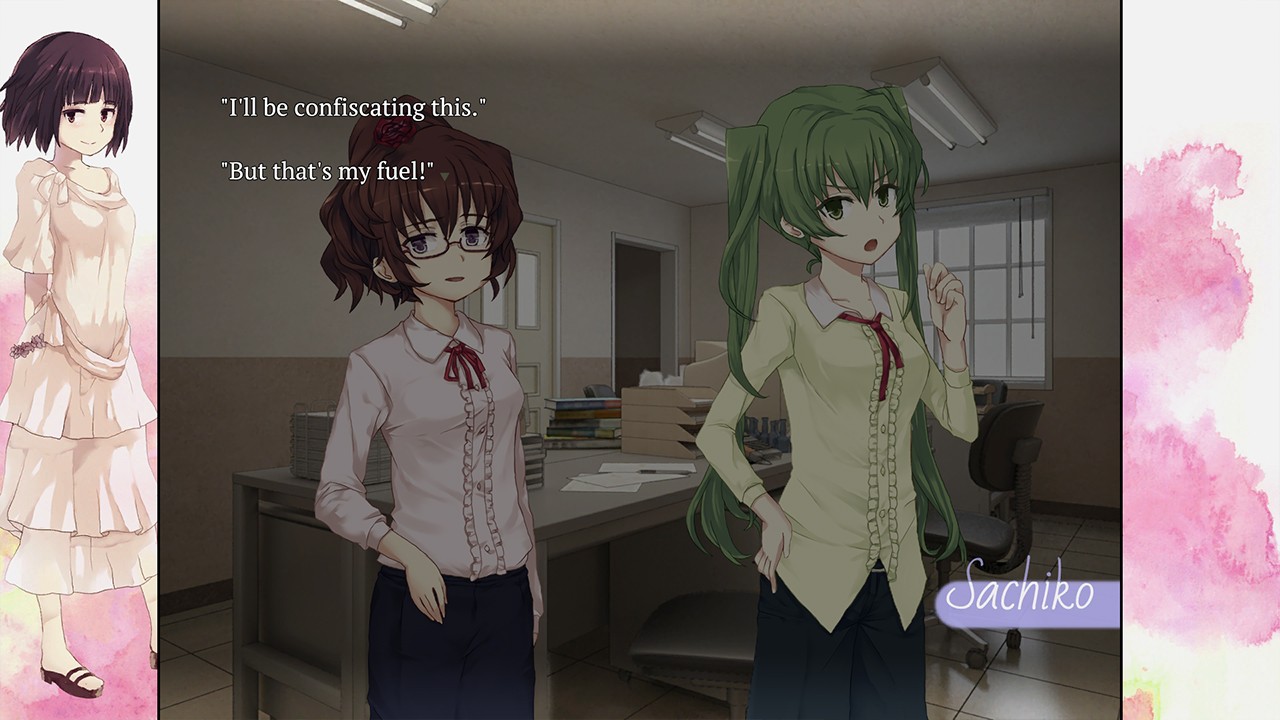 For some people, you’d see the word kinetic at the beginning and immediately become put off. There aren’t any branching choices in the story of SeaBed, which comes to us from developer Paleontology and published by Fruitbat Factory. For some, the idea of just reading is brutally boring if you don’t have the excitement to encounter new information or new ideas along the way. Technically speaking, they are mostly right: you read through and get to understand what’s happening with Sachiko, you reach an ending, and that is the ending Paleontology intended, plain and simple. Sure, there are visual novel factors: pictures, music (no voice work), and the important pacing of words appearing as they need to, as opposed to just a full page of words. Is it even worth reading, then?

SeaBed is a gorgeous, engaging, heartbreaking tour de force that takes the reader on a wild ride through the mind and life of Sachiko. The effect of playing SeaBed is very similar to the frog soup paradox. Thrust a frog into hot water and it leaps out, but put a frog in cool water and gradually heat it up, and the frog will be boiled alive (that may or may not be true, I just heard it on Dante’s Peak). When you begin SeaBed, it starts off with a small peak into what’s plaguing Sachiko before jumping into what feels like a slice of life visual novel. You see Sachiko and Takako’s life in various snapshots: you see them in school, at the workplace, on vacation together. You see their love together and how they intermix affection and friendship, unsure of each other and how to act but knowing they belong together. If you’re at all squeamish about anime girls kissing, there’s plenty of it and it carries a lot of charge without being lascivious. It’s framed with the inner thoughts of the women involved to give it romantic gravitas, to show how things are linked to the heart and the mind.

The portrayal of SeaBed is hypercritical, and it’s the gentle, almost ocean like pacing of art and music that help to bring you closer to the story and the characters themselves. Having played a lot of visual novels, it’s shocking to notice the differences in how the design affects the proportions and angles of the cast. The men, which are few and far between, tend to be very nondescript, like the average dude on the street or in the office that you would see and dismiss. There’s nothing that is bland or boring to downplay their presence (they aren’t just shadows), but they’re human, which is sometimes a nice change of pace from the comical, stereotype facets that we normally see. The women, on the other hand, are crafted in a way that allows you to focus on more intimate and romantic notions. The very opening shot has you in bed, awakening to your beloved next to you, and you’re immediately drawn to the eyes and not the states of undress. Even when we move on to the beach and everyone is in swimsuits, players note that there’s no hyper sexuality being pushed onto the characters and, subsequently, onto the audience. When the plot is focused on love and memory, the artwork can follow suit and let you just know there’s life here, and not just skin. It’s a very nice change of pace after something like the NEKO games.

Additionally, I adored the music from front to back. The piano theme over the menu is one of my favorite pieces of video game score that I’ve heard in a while, and it doesn’t stop there. While SeaBed isn’t constantly awash in melancholy minimalism, it does allow players to get lost in critical moments of silence and deafening stillness. There’s upbeat tempo tunes to hit when you’re in the middle of a particularly fun expedition, or an almost jauntiness when you flash to moments in the office, but, for the most part, it follows the tempo of what’s happening in Sachiko’s heart and mind, and that keeps you hooked all the way through. 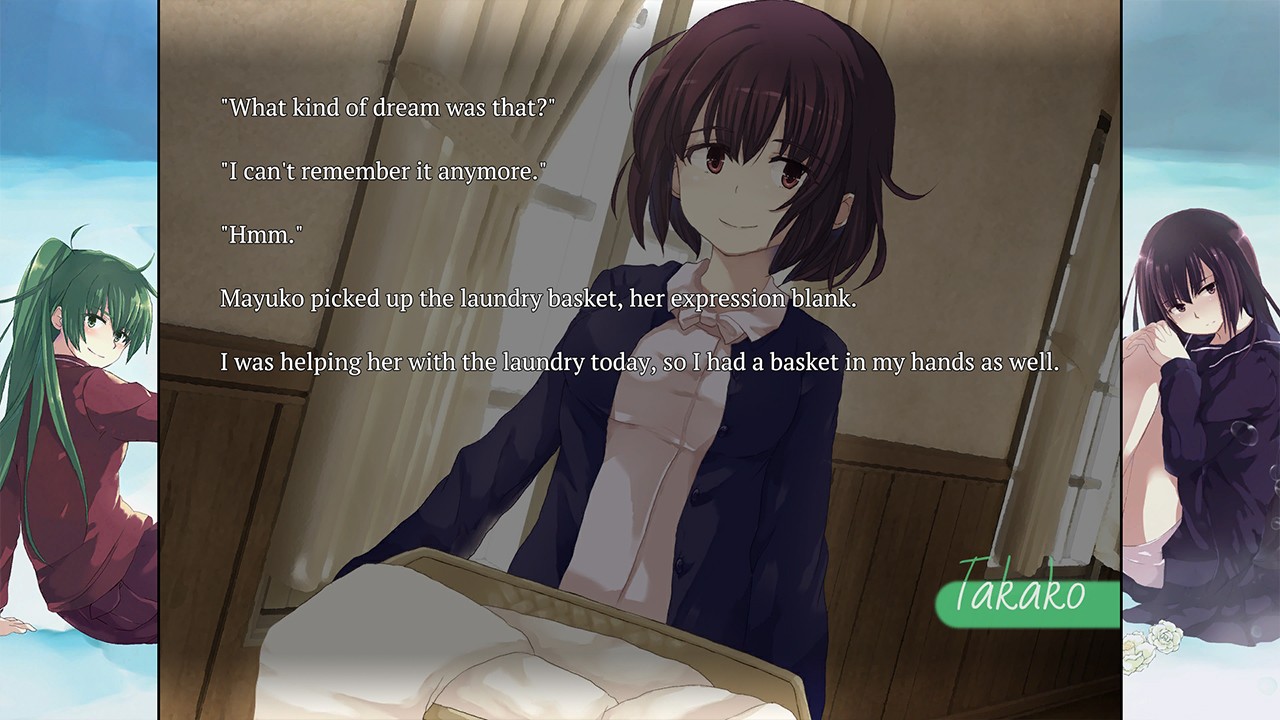 As you move forward into the storyline, it begins to splinter and fragment, like a graceful glass ballerina that shatters mid turn. You scramble to try and connect all the dots, and, to its credit, SeaBed attempts to help you. Besides being able to back up and review the logs (not to mention the very helpful multiple save slots), TIPS are occasionally unlocked that give you glimpses into the world, somewhere behind the curtain. The TIPS can be viewed from a separate option in the main menu, and each does a bit of service to give you a stronger sense of perception and understanding. For example, the very first TIP is a very unassuming one that describes an abandoned room somewhere in a hospital, one that needs to be cleaned and seems adorned with objects that have a connection, but not an easy to see one. Once you cross a certain threshold in the game, though, you can go back and revisit this TIP to better understand its importance to Sachiko’s reality and her own falling as you move forward within a story that, at best, has a bittersweet ending.

SeaBed is the Slaughterhouse Five of visual novels. You need to run through a jumble of untethered, seemingly random moments before you begin to fully piece together the storyline, and, even after you begin to assume the answers, you can’t just declare a victory. You still need to see where everyone and everything lands in terms of fates and desires, in terms of what could be and what is and what may never happen. You must see the love and the loss all the way through to the end, and, like the rest of us who paged over the 20+ hours of heartbreak and loss, you need to decide for yourself how the story ends. Is there happiness beyond the pale and a possibility for a positive end? There are many interpretations, and even the most uplifting ones are tinged with sadness, bitterness and a sort of shock over it all. It’s the ultimate in curses. Find someone you love so much that your world is destroyed when they leave. Find a connection that’s so strong that it tears apart everything else when it’s severed. SeaBed leaves the reader alone, in solitude, at the bottom of the ocean, but think, for a moment, as the darkness encroaches. Is the silence peaceful, or screaming?

I hope you find peace.

Chasing ghosts and getting lost in your own mind has never been so romantically, heartbreakingly wonderful.